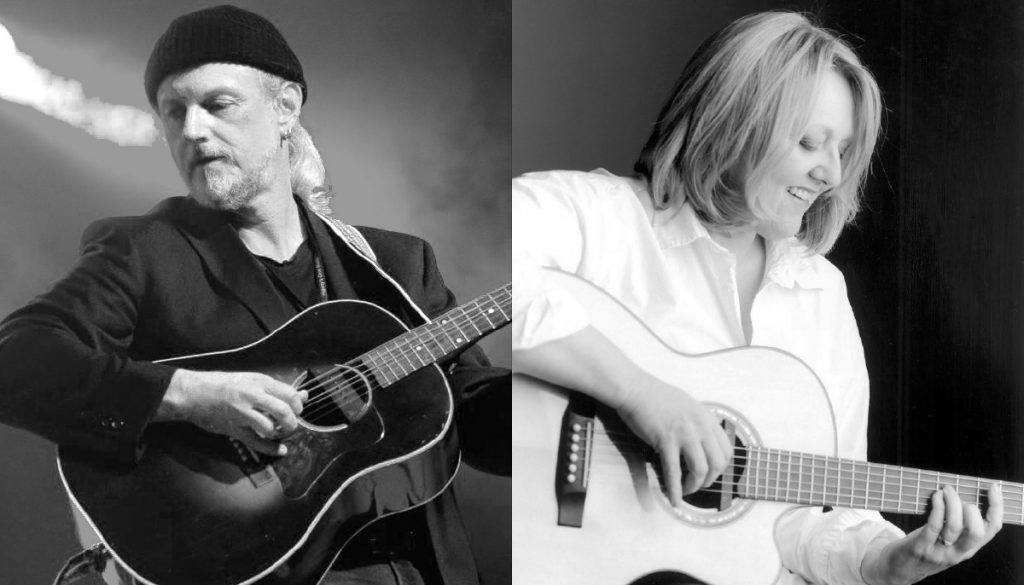 Garnet Rogers
Born in Hamilton, Ontario to parents of Nova Scotian descent, Garnet Rogers spent many hours in front of the old floor model radio listening to Grand Ol’ Opry broadcasts and harmonizing with his brother, the late folk legend Stan Rogers. Two years later, Garnet was playing the definitive 8-year-old’s version of “Desolation Row” on his ukulele. He soon abandoned that instrument to teach himself the flute, violin and guitar.

At 18, Garnet was on the road as a full-time working musician with brother Stan. Together they formed what has come to be accepted as one of the most influential duos in the history of North American folk music. Garnet acted as producer and arranger for his older brother from 1973 to 1983, when Stan died tragically in a plane crash.

Since then, Garnet has courageously established himself as a formidable solo artist. Hailed by the Boston Globe as a “…charismatic performer and singer — one of the major talents of our time,” they continue by saying that “Garnet’s vocal and instrumental talents are complimented by an undeniably powerful physical presence — close to six and a half feet tall — with the lungs to match.” With his “smooth, dark baritone” (Washington Post) his in- credible range and thoughtful, dramatic phrasing, Garnet is widely considered by fans and critics alike to be one of the finest singers anywhere. His music, like the man himself, is literate, passionate, highly sensitive, and deeply purposeful. Cinematic in detail, his songs give expression to the unspoken language of the heart. An opti- mist at heart, Garnet sings extraordinary songs about people who are not obvious heroes and of the small every- day victories. As memorable as his songs, his over-the-top humor and lightning-quick wit move his audiences from tears to laughter and back again.

Rogers has been the featured performer on numerous television and radio programs including Much Music, Mountain Stage, and All Things Considered. He has been a headliner at concert venues and festivals such as Wolf Trap, Lincoln Center, and Art Park; sharing the stage with performers such as Mary Chapin Carpenter, Billy Bragg, Bill Monroe, Ferron, Greg Brown, and Guy Clark. Though Garnet has enjoyed much popularity over the years, he remains resolutely independent, turning down offers from major labels to ensure that he contin- ues doing music his own way.

“Just when you think you’ve got it all figured out, something roars in and it turns you about.”

Connie Kaldor writes this and more about the unexpected twists and turns of life and love. She could well be writing about her personal artistic complexities. Music pundits have tried to define the essence of the prairie-born acoustic performer for over two decades, but even the most eloquent have fallen short of perfection. Fact is, Connie Kaldor is a performer without borders. A contradiction in terms. She is a Juno Award-winning singer who has flourished on the folk music scene for over two decades, yet her repertoire of original material blurs musical boundaries, embracing elements of gospel, rock, country and western, folk, blue grass and adult contemporary.

She is an artist of substance without pretension, witty and urbane without condescension. She is a fearless chronicler of the human experience without the folksong angst. She has recorded nine albums, sold tens of thou- sands of copies, but has never had a commercial hit. Her live performances are legendary and her fan base broad and fiercely loyal. People come back to see her again and again because a Connie Kaldor performance is about more than just the power of music. It is also about the power of personality. What she says between songs is as intriguing as the lyrics she sings.

She has traveled prairie backroads to visit modest community centers and sold out concert halls in major cities. From Beijing to New Delhi to Saskatoon to Washington, Connie has triumphed with a mix of song and spoken word honed in pacing and tone by the many years she spent performing. Like many prairie girls in the 50s and 60s, Connie grew up singing in the church choir and listening to Patsy Cline and The Beatles on her record player. But it wasn’t until the 1980s, after four years spent performing with an avant-garde theatre company in Toronto, that Connie turned to music full time and was welcomed with open arms by the folk scene.