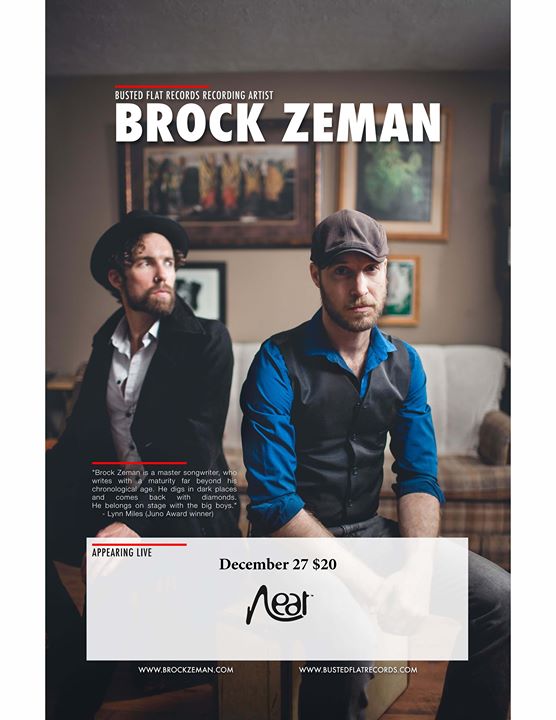 We are pleased to announce Brock Zeman will return to Neat but with the full band! Come check out this awesome live performance just before New Years! Tickets on sale now, limited dinner reservations will be available before the show.
Check Him Out!


BROCK ZEMAN
When it comes to storytelling, Brock Zeman is a master craftsman. The Canada-based singer-songwriter has spent the past 12 years carving and chiseling Americana soundscapes, drawing from roots-rock and alternative country. But what separates Zeman from his contemporaries isn’t a willingness to speak truth – it’s his unwillingness to conform to the rules of Nashville and the traditional framework of genre. What gives Zeman’s stories force isn’t that he’s just singing a narrative – he’s living it.

Over the course of his career, Zeman has released 12 studio albums, one live record, toured North America extensively and received praise from numerous press outlets. “His songs have more depth than can be realized first time through, which only enhances with each listen,” wrote Penguin Eggs. Zeman has also won a slew of songwriting awards, including 2nd place at both 2016’s Unsigned Only Competition as well as the International Songwriting Competition (ISC) for his track “Pulling Your Sword Out Of The Devil’s Back.” In 2017 he returned to ISC as a finalist with his song “Dead Man’s Shoes.”

“I was inspired to write from the feeling I got when I listened to music,” Zeman recalls about his childhood. “I always hoped I could pass on the same overwhelming feeling to others.”

Beginning his career as a punk rocker, Zeman’s musical tastes gradually expanded to a love for country, bluegrass and roots. After years of experimentation, and with the help of longtime collaborator Blair Hogan, he carved a place for himself in the realm of Americana. His discography spans 12 albums – plus one live record – over 12 years, including his most recent releases: The Carnival is Back in Town (2017), Pulling Your Sword Out of the Devil’s Back (2015) and Rotten Tooth (2013).

With an acoustic guitar and raspy voice, à la Greg Brown, Tom Waits and Mickey Newbury, Zeman has managed to preserve the DIY ethos of his punk rock upbringing. He’s an engineer and producer who not only tracks his own material, but has recorded other artists in his Ontario studio (called The Big Muddy), including Nashville troubadour David Olney. He also does voice-over work for television, and created his own booking agency named Green Room Music Source Canada.

Brock Zeman’s 13th studio album is expected out in spring 2018. He’ll be out supporting the release on tour in North America and the UK throughout the year.