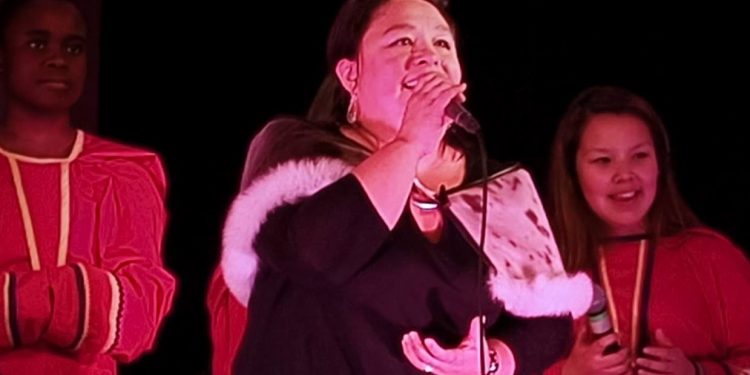 There aren’t a lot of Inuktitut Christmas songs. Working on remedying that, Inuk artist Looee has released a new Christmas EP titled Quamakuluit, which translates to “lovely lights” in English.

“I wanted to release joyful singing and something positive … to listen to in our language,” she told Roots Music Canada.

Although Santa Clause is not part of Inuit culture, they have adapted the idea to fit within their values. she explained. They call him the gift giver.

Most Inuktitut language Christmas music has a more traditional sound.

Looee wanted to be able to give people a sense of wonder and merriment around the holidays instead. Through her music, she wants to remind people to dream.

“It’s my gift to the children that I love [sung] in the language that I love,” Looee said.

Most of her music is in Inuktitut, she said, because she is able to best express herself in her own language. She hopes that her songs inspire the younger generations to fall in love with the tongue and to keep it alive.

The first track, “Quamakuluit,” bears the same name as the album.

Where Looee lives in Nunavut it gets cold and dark in the winter and the “lovely light”‘ she sings about represents the love people feel and share despite this, she said.

The song also goes into the values she carries around Christmas.

“It talks about how in Inuit culture we exchange love, we exchange kindness, [nonmaterial and material] gifts, and hospitality,” she said.

The second track, “Saanti Kalaasi,” is about the gift giver and includes personal touches like singing about what gifts her children want for Christmas this year. She said that the song is popular among kids.

The third and last song on the album is “Illuup Qaangani.” It places the gift giver in her culture. The song depicts caribou and dog sleds, things that can bring a feeling of home to the dream of Christmas and the gift giver.

“I wanted children to have the ability to relate it to our culture and our language,” she said.

Although she has already dropped three albums this year, Looee is in the process of producing more music. She is hoping to release it next year.