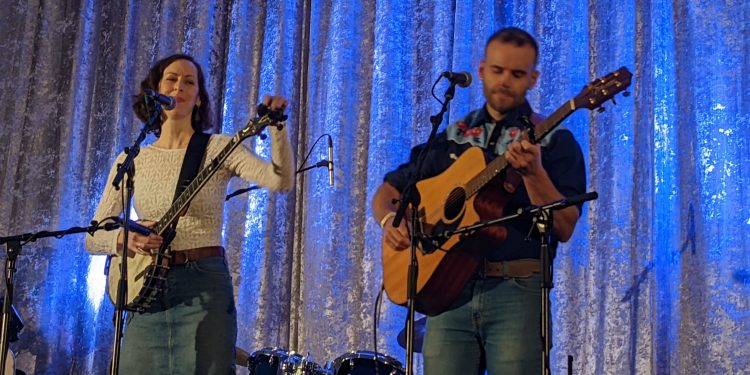 They say timing is everything. It’s a phrase that can be used seriously or facetiously. For folk singer-songwriter Hannah Shira Naiman, it could be a bit of both when talking about her latest album The Wheels Won’t Go. She was taking part in a “creation residency” which was funded by the Ontario Arts Council when outside forces conspired against her.

“One winter I went out and spent six hours a day intensely writing songs and then I would pick up my daughter at daycare,” Hannah said. “It was a really great time and one of the first times I had had childcare in the two years since she was born. It was a long break for creativity for me.”

Unfortunately, the residency was cut short because of the pandemic. But it did spawn a couple of songs.

“It was, ‘Oh gosh, this is ending’, so that’s where the song ‘The Wheels Won’t Go’ came from,” she said. “I thought, ‘something bad is coming around the corner and I don’t know what to do’, so I wrote the song with that sense of urgency pretty quickly in March of 2020. ‘Vinegar Pie’ was a lockdown creation.”

To add further angst and upheaval, Hannah and her partner signed the papers for a new home in Huntsville, in preparation to a move from North Bay, the day before the Province of Ontario declared a State of Emergency.

The video Hannah created for the title song was a showcase for another one of her skills.

“I’m really proud of that,” she said. “Before being a professional songwriter, I was pursuing a career as a professional dancer, so the video combines my love of dancing and of music. It was really fun to put them together.”

Maintaining a career in music while raising a young family means priorities and practices have to change.

“Which is why that creation residency was so valuable to me,” Hannah said. “Also, it’s why my plans for recording this album had to change a million times. Once the pandemic hit and lockdowns started, we didn’t have any support. We didn’t have any childcare, so we were full-time parents all the time and at the end of the day all creativity was just sapped out of me. 7:00 is baby bedtime so I was like, ‘OK, well I’m going to bed too!'”

The album was recorded in Toronto with Ken Whiteley as her producer.

“When I eventually came to Ken after various iterations of this project, it felt like a safe place to land and I’m really happy with where it ended up.”

A couple of the songs on The Wheels Won’t Go deal with a subject not often explored in song and not always talked about in life: post-partum depression.

“I was in a really lonely place in Northern Ontario and I just needed an outlet to express that solitude.”

To help raise awareness, Hannah’s album release concert in November at the Tranzac Club in Toronto helped to fund a donation to The Canadian Perinatal Mental Health Collaborative.

For more information on Hannah Shira Naiman and The Wheels Won’t Go, go to hannahshiranaiman.com.

Her talent to humility ratio was ‘off ...