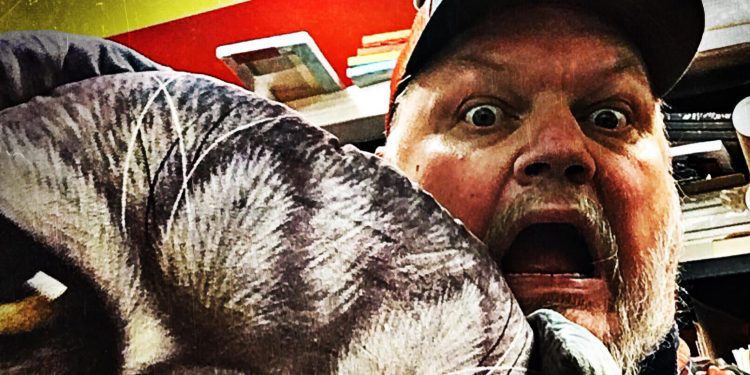 Fernie singer-songwriter and visual artist Troy “Bubba” Cook was a truly original talent whose work was populated with robots, zombies, space aliens, serial killers and rabbits – and whose paintings, combining images and text, exploded with colour.

To hear his friends tell it, he was also a committed leftist, a devoted husband, a hard worker, and a loyal and supportive friend.

Troy died on Saturday after a four-year battle with colon cancer.

A Facebook post by his wife, Deb, announcing his passing has been greeted with a lengthy outpouring of messages of condolence from friends, family and fellow musicians, including Jesse Zubot, Linda McRae, Cara Luft, Lester Quitzau and Doug Cox.

Some of them shared memories of him with Roots Music Canada.

“I met Troy Cook in Fernie when I played the Cappuccino Corner in my 20s,” singer-songwriter Ben Sures recalled over Messenger.

“He was Fernie’s cultural beacon. I have no idea why he came to my show but I guess we hit it off. I would do these shows sometimes — double bills with Joel Fafard or Paul Bellows — and very few people would come. But Troy would be there.”

After one of those sparsely-attended shows, Troy took Ben to an open mic party with about 200 people in the room, where Ben easily won over the crowd.

“That may have cemented our relationship,” Ben said.

Ben admired many things about Troy: his devotion to politics, campaigning, art, ideas, friendships, and especially his marriage, he said.  He also loved the kind of person Troy was.

“He could mix with any brand or class of people without adapting to meet someone on their terms,” he said.

“One time we played in Prince George at a fancy restaurant called Hummus Brothers. There was Troy singing about Richard Speck on his ukulele and weird songs about serial killers and Whitney Houston. The audience completely ignored him. In the microphone he said, ‘When I say ‘shit face,’ can you hear me at the back of the room?’ He was funny, loyal and had an imagination unmatched. He wrote about zombies and wacky characters, and he was an icon in Fernie. Basically to know Troy was to come around to his way of seeing things. He just stood there till you recognized his artistic value.”

Juno nominated bluesman Rick Fines remembered Troy as “a grand man [who] loved music and did much to make his home a home for travelling musicians.”

“He brought me and my musical friends into Fernie and brought Fernie out to see us,” he said.

In the 1990s, Rick asked Troy to consider doing a painting for an upcoming album cover, and Troy sent him four originals as a gift, two of which are featured in his album Out of the Living Room.

Jut recently, Troy had presented an online concert for Rick.

“I was looking forward to [finding] a way to tour through and see him again,” Rick lamented.

Singer-songwriter Leslie Alexander knew Troy because he booked her several times at the Arts Station in Fernie and once for a festival.

They weren’t close friends but she was a fan of his music, she said.

“I thought he was a brilliant artist, highly original with loads of insight and sly humour. I would say the same about his graphic art. As a person, he demonstrated courtesy, integrity, and ferocious wit. I was also struck by his relationship with Deb. They were both outstanding hosts every time I was there, very hardworking and accommodating people.”

Juno winner Helen Austin of Big Little Lions met Troy several times while gigging and remembered the enjoyable time they had “ranting about the state of the world” on his podcast.

“He had such a big heart and I was so sad to hear had passed,” she said. “What a larger than life, wonderful human.”

As for me, I was introduced to Troy — virtually — by Ben when I did publicity for their Death Ballad Love Tellers tour, a trio production that also featured David P. Smith. It was a project that saw the three artists challenging themselves to write murder ballads — though judging by the outcome, it wasn’t much of a challenge.

Troy’s contributions to the project included “Nannie Doss,” a song about the serial killer known as the “Black Widow” and “Willing Hippies” about the followers of Charles Manson.

They were characteristically raw and fit the mood of the project perfectly.

Honestly, the moment I discovered Troy, I just loved his penchant for writing songs about zombies and Satanic rabbits. I adored that a folkie could be so far out.

I would never meet Troy or get to know him beyond the professional relationship, which carried on for the duration of the tour.

But I remain a fan of his work.

The folk scene has lost one of its most original artists much to soon.