How PEI drew the members of Inn Echo to settle there 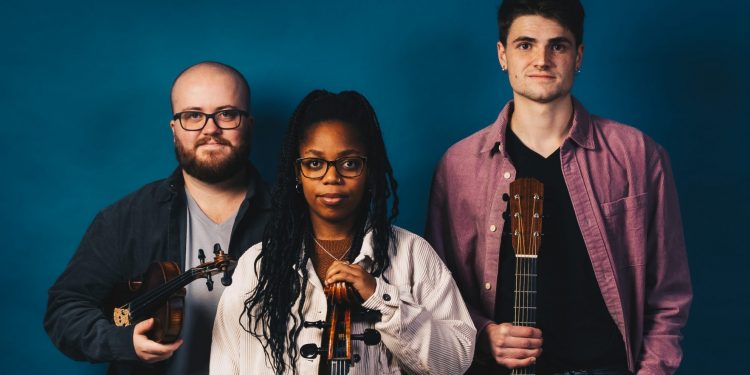 There are any number of reasons why the members of a band come together. It could be a shared love of a style of music, common musical influences or a general curiosity about a musical heritage. Or it could be a different type of instrument that piques one’s interest.

“There was a party on the Labour Day weekend where Tuli (Porcher) was in the car that picked me up, and I said, ‘Hey, I hear you’ve got a five-string fiddle!'” said fellow fiddler Karson McKeown. “I’ve never looked back since.”

“The original formation of the band was a quartet,” Tom explained. “I’m actually the newest member and was Inn Echo’s biggest fan for the first year they were around. Right off the bat I saw them doing this really cool stuff, really working hard and making these really creative arrangements.”

Tuli, who also plays the cello, is from Victoria, B.C. and started playing classical violin at the age of three before progressing to fiddle tunes at five and cello at 10 years of age. Having a classical background has been important for her development as a musician.

“It’s kind of like the foundation,” she said. “It’s a huge base, and then you kind of build from there with other styles of music.”

Karson grew up in Ottawa and started playing fiddle at the age of 10. Surrounded by the Ottawa Valley fiddle style, he was also exposed to the East Coast style during family vacations to PEI. Tom was also an early starter in music, getting a guitar at the age of five in Butte, MT and expanding his love of music during yearly trips to Saskatchewan.

They originally formed Inn Echo so they could go to the Folk Alliance International conference, the largest gathering of folkies in North America.

“We were asked to do that but we didn’t have any material yet,” recalled Karson. “So we quickly arranged four sets, recorded them as an EP, went to Folk Alliance and played those sets for the whole week. Then when we got back home we completed the album.”

“People always assume we have this elaborate process,” said Karson. “The tune will generally be written before we get together to arrange it, whether it’s original or traditional. Then we kind of lock ourselves in a room for a while, play it a whole bunch, and then try and think of ideas to make it that much more… and kind of nerdy.”

When listening to any fiddle-centric group, it’s easy to be dazzled by the virtuosity of the fiddlers. But spare a moment to notice the guitar accompaniment that so often is what drives the tune along.

“It’s hard even to find people who teach that style,” said Tom. “A lot of what accompanists have done is just sitting in on sessions. I came in with a lot of knowledge from Jake Charron of the East Pointers and folks from Saskatchewan. By the time I got to the island, I could play with fiddlers but I wanted to learn the broad music stuff.”

Studying at Holland College gave Tom further knowledge of harmonics, rhythm and different music styles, which he’s been able to apply to his fiddle accompaniment.

“It was adding all the extra ‘brain stuff’ to put into what my fingers already knew how to do.”

The college in Charlottetown is what drew Tuli, Karson and Tom to Prince Edward Island in the first place and now it’s the island that keeps them there.

“The community is huge,” said Tuli. “We’ve all stayed for around four or five years because we’re all drawn to the music there.”

For more information on Inn Echo, go to innechomusic.com.