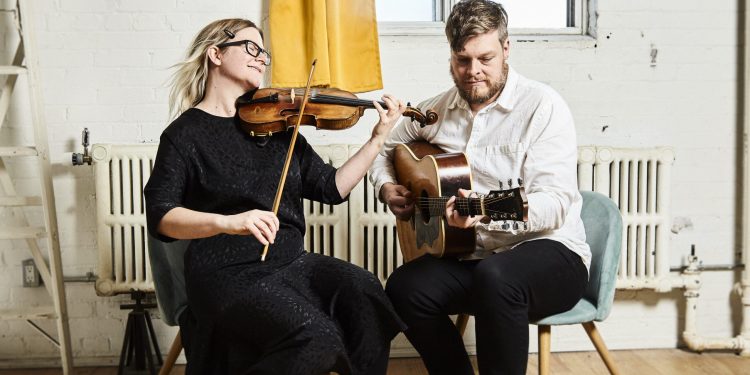 Elise Boeur and Adam Iredale-Gray have been playing fiddle tunes of one sort or another for over 20 years. In that time, their musical journeys have taken them off, separately and together, in all sorts of directions. Stops along the way have included studies at institutions of the calibre of the Victoria Conservatory of Music, Berklee College of Music and Høgskolen i Telemark in Norway. They’ve also both done their fair share of road work and paid their musical dues in outfits like Fish and Bird, Jenny Ritter’s band and their current ensemble,  Canadian Folk Music Award winners Aerialists, which presents fiddle tunes in a jazzy prog-rock influenced context.

As the name suggests, their latest offering, Fiddle Tunes, involves no such shenanigans but rather gets back to the simple intimate pleasures of playing well-loved tunes in a natural, unadorned setting. The line-up for this album is Elise on fiddle and hardingfele, Adam on fiddle and guitar, and their buddy and occasional bandmate and collaborator, Robert Alan Mackie, on upright bass. In case you’re unfamiliar, the Norwegian hardingfele (often referred to as the Hardanger fiddle) has four strings that are strung and played like a violin. What gives it its distinctive sound are the understrings, which resonate under the influence of the other four. The album is beautifully recorded and produced, with everything sounding as clear as a bell. It’s free of any unnecessary effects and electronic tomfoolery, and so the sound is completely natural and organic.

Their choice of material is praiseworthy. There are some lovely tunes on offer here, some familiar and others more rarely heard. Most of them are either Irish or Nordic, and they include traditional as well as more recently composed pieces. There’s a palpable freedom of expression in the way the tunes are approached, and the playing is relaxed and intuitive throughout.

One of the strongest tracks, Martin Wynne’s “#2 / Toss The Feathers / The Sally Gardens,” contains some of the better-known Irish session tunes, and the exuberance and driving rhythms in the playing is a joy to behold. They truly breathe new life into this set. On the Nordic side of things, “Nils og Jens og Gjeidaug” is an enchantingly off-kilter piece full of unexpected melodic and rhythmic twists and turns. “Chinquapin Hunting” is an American old-time tune with a wonderfully intricate melody, underpinned by some neat bowed bass work. There are several tracks where Elise and Adam play fiddle together in unison before venturing into harmony, descant and counter melody. A good example is on “Rodney’s Glory / Scully Casey’s / Dave Collins’,” a medley of Irish tunes that also features a sprightly bass solo from Mr. Mackie. “Polska efter Jöns Persson” is a Swedish polka, which again features twin unison fiddles swooping and soaring together on this danceable melody. “London Út” was composed by the Icelandic jazz band ADHD and adds some variety to the mix, with its somewhat spooky feel and haunting melody, which is enhanced by the interplay between the two fiddles and bowed bass. The album closes with a set of Irish tunes, “Frank Thornton / Cock and the Hen / Cottage in the Grove,” which features some fine and nimble guitar picking from Adam.

Throughout their musical adventures, Elise Boeur and Adam Iredale-Gray have always stopped and taken advantage of the opportunity to join in with local fiddle sessions. In the process they have picked up new tunes and added them to their repertoire. Others have come from recordings or books, but whatever the source, one thing is clear: they both know a good tune when they hear one! Now we can all take advantage of this rich harvest, which has come to fruition on this excellent album. It’s clear that everyone involved is enjoying themselves and playing this stuff just for the joy of it. Fiddle Tunes will make you smile, then make you want to dance. And in times like these, that’s no small thing!

Presley and Devon rock out and fan ...