Presley and Devon rock out and fan girl with the Sheepdogs, Nov. 5 at Centre in the Square, Kitchener 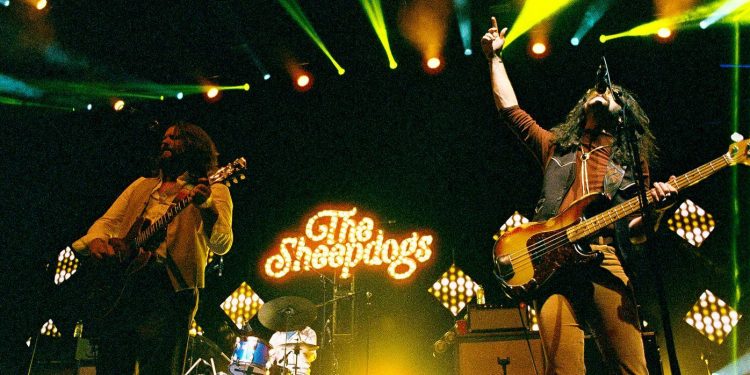 The Sheepdogs on stage in Texas shortly before the Kitchener gig. Photo by Mat Dunlap.

I never considered myself a very lucky person. When it came to anything that was only achievable by fate, it seemed like fortune was never in my favour.

So, I was almost laughing it off when I decided to enter myself into a giveaway for concert tickets to the Sheepdogs. I’ve already had the pleasure of seeing them twice this year, once in Port Colborne at Canal Days and then at Massey Hall on their current tour back in October. My friend Devon and I always wear our best vintage clothes and fringed attire, making it well-known that we are there to see them. It’s good fun, even though people get mad when we’re dancing in the front row and singing with the band. God forbid the two of us have a good time.

‘Aren’t you the girls that held up the ‘Round of drinks on us sign’ at Massey Hall?’

Frankly, I figured I wouldn’t win these tickets.  But on Wednesday afternoon, I got a message from the station that was holding the contest. “CONGRATULATIONS,” it read. I called Devon, telling her to drop her Saturday plans so we can see the band that we’ve certainly dropped too much money on.

“But I have plans on Saturday with my family,” she said, “I really wish I could go.”

“It’s a meet-and-greet,” I reminded her. “I wouldn’t want to meet them with anyone else except you.”

Saturday couldn’t come fast enough. We had our outfits chosen days in advance, and we discussed what albums we were going to bring to get signed. Devon chose their newest LP, Outta Sight, while I chose their 2018 LP, Changing Colours. I also slipped into the bag singer-guitarist Ewan Currie’s solo album. I’ve really been digging that album recently, despite it being released back in 2019. 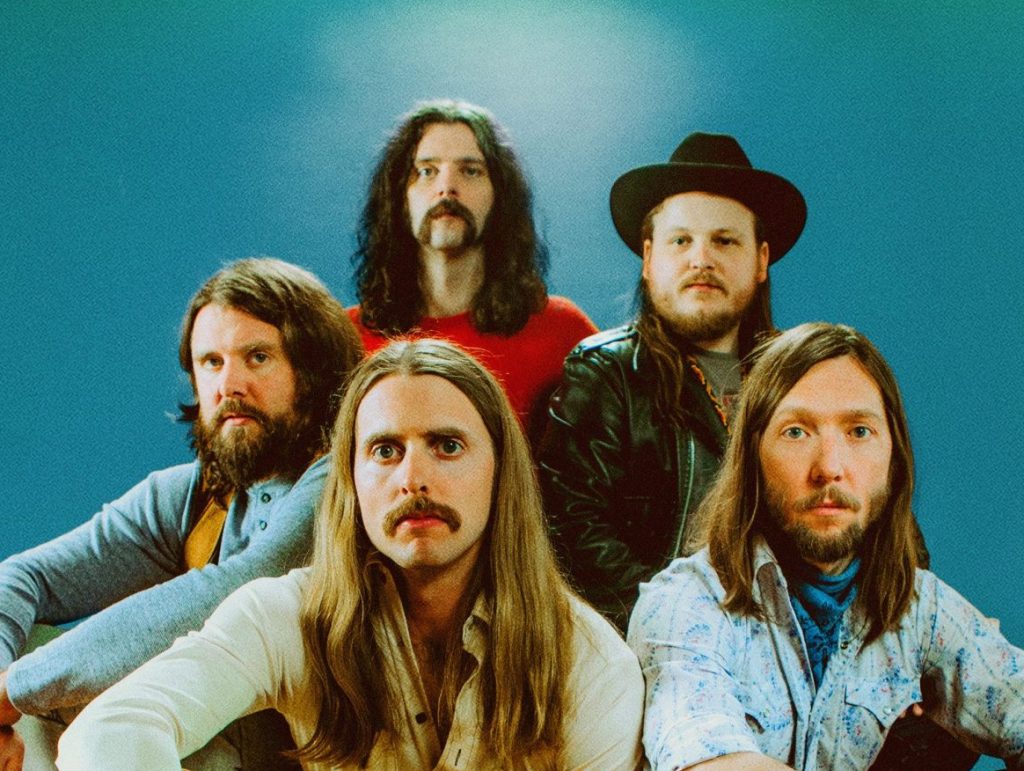 Our hour-and-a-half drive was filled with laugher, lots of “OH MY GOD WE’RE MEETING THE SHEEPDOGS” and cursing at the idiotic drivers on the 401. The tradition of listening to the Sheepdog’s Live at Lee’s continued, where we sang along to every vocal phrase, guitar lick and organ fill like our lives depended on it.

We arrived in Kitchener around 4 o’clock, where we exchanged our driving shoes (Birkenstocks and Bloodstones) for our concert footwear (cowboy boots and lace-up Go-Go-esk boots). We were ready. We grabbed our albums, attempted to fix our hair, which had been messed up by the gusty Kitchener wind and made our way to the box office.

After some confusion about whether we were buying or had won tickets, we got ourselves settled, VIP passes in hand. We couldn’t help but giggle at ourselves sitting beside the other winners. One of the guys called us both “Sheepdog Super Fans,” which frankly is a phrase that I’ll coin and create merch with. But for guys that were trying to play it “cool” they couldn’t hold back their insane jealously while we showed them videos and recounted the events at Massey Hall from less than a month previous. We looked like circus clowns compared to the middle-aged men in jeans and t-shirts—but that’s the price you pay when you wear clothes older than both your ages combined.

Soon after, we got ushered into the lobby. It seemed like we waited forever for them to come out, but it was actually, like, ten minutes.

“Aren’t you the girls that held up the ‘Round of drinks on us sign’ at Massey Hall?” asked Ricky Paquette, the newest addition to the band. This evoked a round of laughter from the band, along with the other winners. It was great to be able to finally meet the men that make us shimmy and shake; the ones who encourage us to be carefree. After two years of no concerts, no live music, no nothing, you’d better believe that we’re going to have a good time when we see the musicians who got us through that mess. 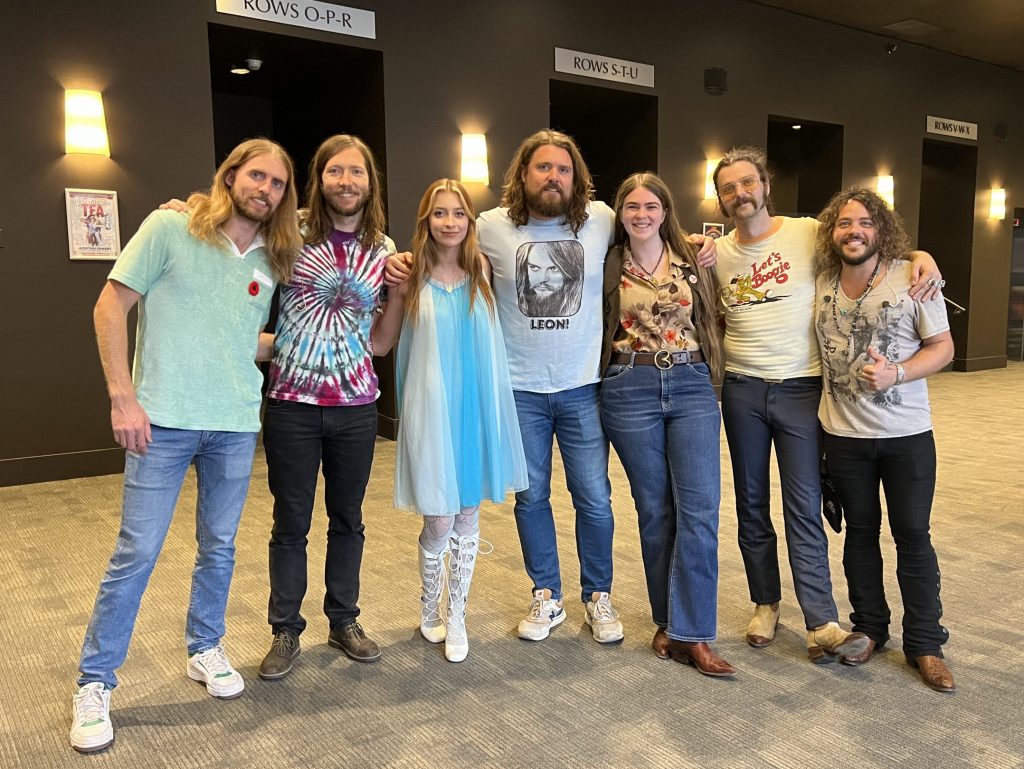 Ewan thanked me for the bolo tie that made its way backstage to him before the Massey Hall show and promised that he’d wear it at the show that night. And somehow, he was wearing the Leon Russell shirt that I’d discussed the last time I wrote about them. Hmm.

I won’t bore you with the detail about them signing the albums or the “I hate live photos” comment or telling them a lady at Massey Hall got mad because we got drumsticks and she didn’t. After taking lots of photos together, it was time to go see soundcheck!

Devon and I sat down right in the front row, where we got to hear a glimpse of “Who”—a favourite of ours to scream the lyrics to.

After soundcheck was over and we had to say goodbye, we made our way back to the car, a little extra pep in our step. We were overjoyed. It’s a feeling that is so hard to capture in writing—being able to walk out of the venue, albums freshly signed, laughing hysterically, having older people stare you up and down because the clothes are something they wore in their youth. It always results in a good time.

After deciding to go to Ethel’s for dinner and indulge in pizza, loaded nachos and the best Shirley Temples we’ve ever drunk in our entire lives, we figured we’d better get back to venue so we can park and get inside, buy more merch and enjoy the concert. We both bought the Live at Lee’s album on vinyl—finally—and made our way to our seats.

“Just letting you know we will sing along to every song they play,” I warned the couple beside us, who also entered the giveaway but didn’t win.

And I wasn’t wrong. By the third song, the entire venue was on their feet. We were dancing and singing every song lyric. It was different being so far back, but we still rocked row R like it was the barricade. Even though we were seated in row R, I could still see the gold and black bolo tie shimmering from Ewan’s neck. Bras and underwear were thrown on stage, something that we haven’t seen at a Sheepdogs show before. Frankly, I think the bolo ties were a better present, but alas.

Despite the setlist being nearly identical to Massey Hall’s, each song was played differently compared to the previous time we heard it. When you go to a Sheepdogs concert, expect to hear the Canadian rock radio classics such as “Feelin’ Good,” “Downtown” and “I Don’t Know.” It’s unavoidable; every band has the songs that get even the people in the very back on their feet. But along with those come the newer songs, “Scarborough Street Fight,” “Jesse, Please” and “Are You A Good Man,” which features Shamus Currie on vocals, even though he doesn’t sing on the album version.

One of my favourites, next to “Scarborough Street Fight” is “So Far Gone.” Not only is it featured on their newest LP, it also features a Rhythm Ace FR-2L providing the beat, instead of drummer Sam Corbett. This allows him to step away from the kit and be at the front of the stage with his fellow band mates.

One of the guys called us both “Sheepdog Super Fans,” which frankly is a phrase that I’ll coin and create merch with.

Don’t get me wrong, I love every song they play live, but “Scarborough Street Fight” always takes the number one spot. Saturday’s “Street Fight” was easily the best version I have ever heard—an intense jam between Ewan and Rick, while Shamus played soaring organ licks on top. Ryan Gullen, the bassist, held down the bassline as he marched across the stage triumphantly.

“Bad Lieutenant” is another favourite of mine. For a song that is littered with innuendos and intensified by Ewan’s vocal phrasing, not captured in the album version, it makes for a great live song. You never know where the song is going to end up, despite knowing the song. 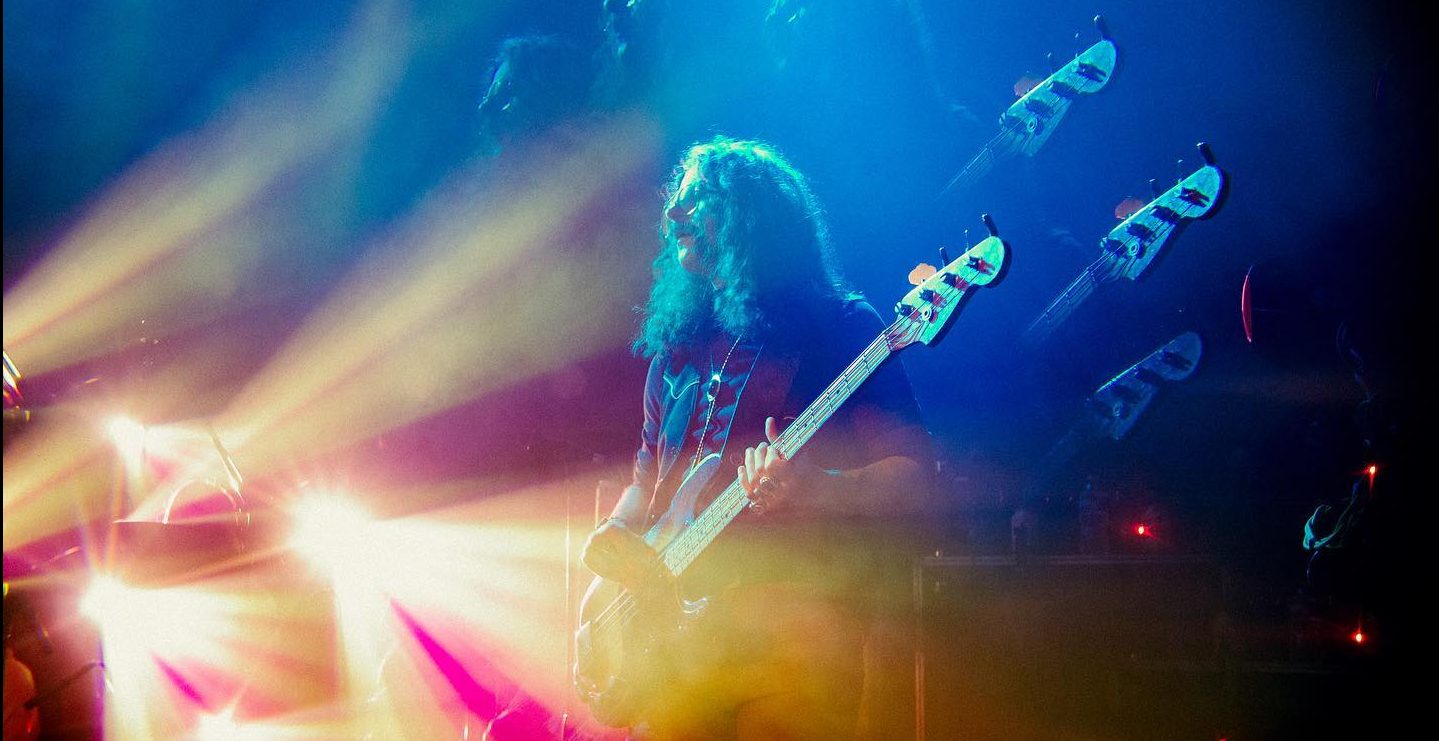 On stage in the southern U.S. Photo by Mat Dunlap.

Last time I wrote about the Sheepdogs, I described them as “truly in their own league—blending influences of The Allman Brothers Band, Bachman-Turner Overdrive and a sprinkle of Rick Derringer; exemplifying that they themselves should and could have been releasing records back in 1970 as well.” Even with Rick filling the shoes that Jim Bowskill left, I still stand by the statement that I made back in August.

From the opening notes of “Rock N Roll (Ain’t No Simple Thing)” to the closer, “Nobody”—Ewan’s coined “shake and shimmy” song—the Sheepdogs had the crowd in the palm of their hands for almost two hours. Seeing them live has never disappointed me once, and I don’t think it ever will.

Nothing can compare to seeing a band live. Sure, you can watch previous concerts on YouTube, or the concert videos you took on your phone. You can listen to live albums, but nothing beats having the band in front of you. Nothing beats the thunderous roar of applause and cheers after each song. Nothing beats chanting “Shamus! Shamus! Shamus!” before he sings “Are You a Good Man.” There are a lot of bands attempting to recreate the authenticity of the 70s through their music. However, after seeing these guys three times in the past year, I can wholeheartedly say that the Sheepdogs are the best rock n’ roll band right now.

Nothing beats seeing the Sheepdogs live. I cannot wait until the opportunity arises again.