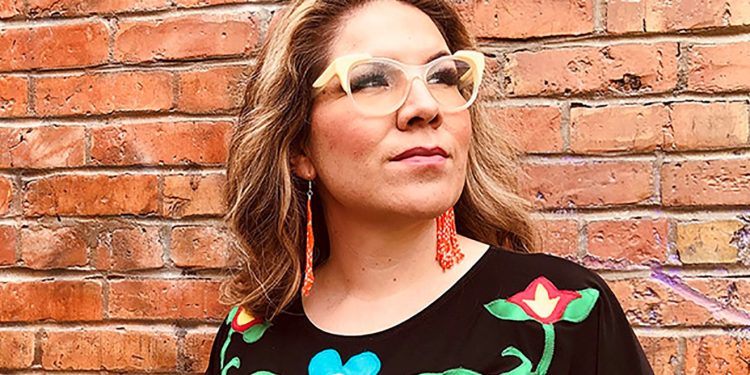 A healing image of orange sunsets mixes with heavy grief on Indigenous blues singer-songwriter Donita Large’s soaring new single “Reconciliation Sky.” Inspired by the horrific 2021 news headlines that 215 unmarked graves had been detected at the former Kamloops Indian Residential School in British Columbia, Donita did what she describes as “the emotional labour of reconciliation work as an Indigenous person” through her music with this new song.

Donita’s own father is a survivor of a Residential School, and so are several other Cree and Metis family members, so she needed a way to process the feelings that flooded her when the Kamloops story made the headlines, she said. Friends and colleagues contacted her immediately when the story broke because, by that point, Donita had already long been involved in teaching about the traumas wrought by the schools and assisting survivors with their interviews for Independent Assessment Process (IAP) claims for the Residential Schools Settlement Agreement.

Because she already knew much of what was just now being covered in the news, the emergence of the truth on the world stage came as somewhat of a relief.

“I was fine, even a bit relieved,” Donita said. “I knew of the unmarked graves, and I was just happy for their relatives that these children were found.”

And yet she was aware that many people around her were not okay, and that many Canadians were shocked and were finally paying attention.

“They were paying attention to Residential School stories as survivor TRUTH,” she said, “and not just dismissing it as stories of legend and folklore.”

It was a complicated feeling – finally having the truth recognized, but also dealing with the frustration and deep disrespect of not having been believed.

It had been a spring of orange sunsets, and Donita stood in her home, looking out the window and trying to regulate her body and her thoughts in the evening glow. The words “Can you honour the bones of our children?” echoed in her heart, and she wrote the pieces that came.

Then, in August, thanks to the Edmonton Arts Council, Donita travelled to Toronto for a songwriting mentorship with Chris Birkett, known for his work producing several of Buffy Sainte-Marie’s albums as well as for being an accomplished songwriter, singer, and musician. While there, Donita decided she was ready to write a song that honoured her father’s story of going to Residential School and the unmarked graves still being recovered at Residential School sites.

During the song mentorship, Chris and Donita worked together to complete the lyrics and, with Chris’s multi-instrumentation, he built the layers of sound that were needed to create the foundation for Donita’s voice to belt out “Reconciliation Sky, what will your eyes let you see?” Donita arrived home to Edmonton and was fired up with excitement about the songs they had written and realized that this is the time that “Reconciliation Sky” should be heard. She decided that she wanted to release it during Reconciliation Week on the day that schools commemorate Orange Shirt Day, and the day before what is now called National Day of Truth and Reconciliation.

“We are in a time where people are still learning the truth, wrongs are still being righted, healing of intergenerational trauma is ongoing, and history is still unfolding as we honour the children who didn’t make it home,” Donita said.

4 more Canadian folk songs about the ...

Presley and Devon rock out and fan ...