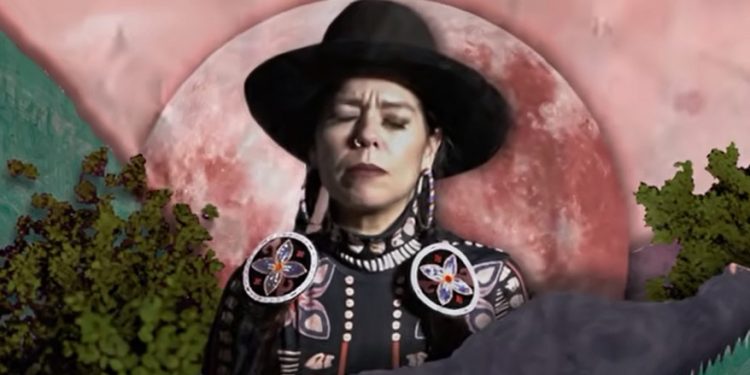 Juno Award winners Digging Roots have just kicked off their new tour with two sold-out shows in the Aeolian Hall Performance Centre in London, ON.

The duo of ShoShona Kish and Raven Kanatakta are performing their 21 shows across Canada as special guests on the Blackie & The Rodeo Kings tour.

They are celebrating their award nominated album, Zhawenim, released on Ishkode Records, the label ShoShona cofounded with Amanda Rheaume, and distributed by Universal Music Canada.

The fourth album by Digging Roots is a collection of songs about residential schools, resistance, climate change and Baamaadziwin (the good life).  The title means “love unconditionally,” and project is an ode to love for the land, the waters and for lovers.

Raven and ShoShona, with help their Juno-wining co-producer Hill Kourkoutis, have seamlessly meshed modern music production with Anishinabek Song Lines which has left their audience entertained through their first few tour stops.

You can listen to the album here.

Digging Roots have spent over a decade celebrating Anishinaabe and Onkwehón:we traditions of round dance and interconnectedness intermixed with sounds of blues, soul and rock n’ roll, hip-hop, folk, reggae, and blues and roots styles of music.

Although Digging Roots is known for their six-piece band in live performance, their newest tour features solely ShoShona and Raven and gives the audience an earthy, moving and powerful vocal and guitar performance. Guitarist Mike Celia has joined the performers for the London, Toronto and Belleville shows. ShoShona and Raven’s son, Skye Polson, will be joining the duo for the remainder of the tour dates. The performers hope that playing tunes as a trio will jog the audience memory of nostalgic groups such as The White Stripe.

If you would like tickets to see Digging Roots live on their fall tour you can find more information here.

See Digging Roots with Blackie and The Rodeo Kings live!

Dave Gunning on Life, Tour and His ...