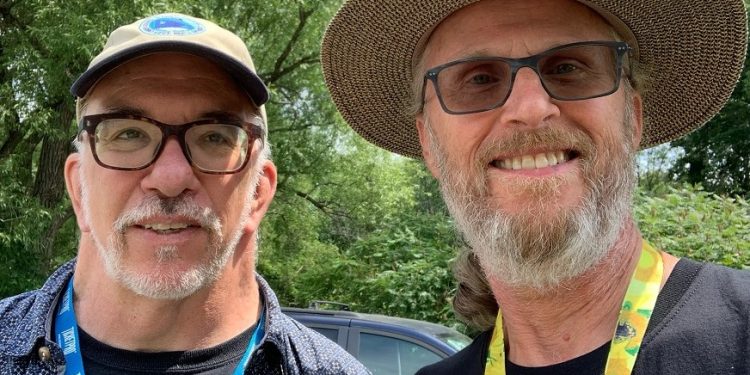 Jan with one of the subjects of his articles: James Keelaghan.

When Jan Vanderhorst released his first Just Us Folk book a year ago – a collection of stories derived from interviews with artists on the Just Us Folk podcast and first published here on Roots Music Canada – the onset of the COVID-19 pandemic was a common theme.

Forced off the road by concert cancelations and public health regulations, artists talked in those interviews about taking time to return to unfinished projects or put energy into new ones.

“James Gordon—it finally gave him a chance to, you know, finish his novel,” Jan recalled.

“With Shawna Caspi, it gave her time to do more painting… It gave Amanda Rheaume and ShoShona Kish the time to put together Ishkode Records… Steve [Dawson] came up with this plan of, you know, he’s able to remotely record artists, record their songs.” 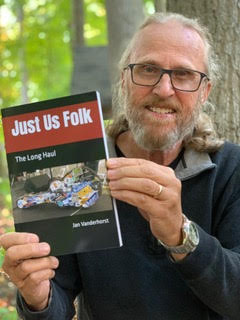 Now Jan has released a follow up, Just Us Folk: The Long Haul, consisting primarily of the stories he published this past year on Roots Music Canada. This time, the collection captures the results of those pandemic projects and sees some artists looking to resume their lives on the road.

“Some of the earlier articles, which were from the fall of last year, you know, the artists were talking about the possibility of returning to touring,” Jan said. “And now it’s like everybody is back into the swing of things.”

If civilization should last another 50 years, and some historian decides to research COVID’s impact on artists, they will have a wealth of material to work from, thanks to Jan’s books.

But nobody should come away with the impression that the pandemic is the sole focus.  As was the case with its predecessor, We Shift and Remain, The Long Haul is a collection of wide-ranging conversations with artists that simply can’t avoid touching on COVID because, well, it’s been a rather dominant theme in our lives.

But there is also a conversation with Barney Bentall about his Ranch Writers project with Geoffrey Kelly of Spirit of the West, which delves into the history of their 40-year friendship.

John Wort Hannam describes the time in his life when he battled voice problems caused by not caring for his mental health.

Dave Clarke talks about the Beatles song that helped get him through cancer treatment. 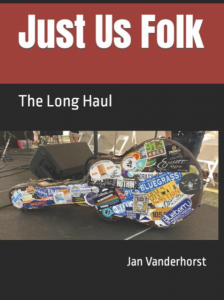 And in a particularly touching interview marking the 30th anniversary of her album The Visit, Loreena McKennitt describes the emotional moment around the release of that album when she realized she was about to become a famous – and the grief she felt over losing her anonymity.

There are conversations with artists on the rise, such as Alison Russell, Morgan Toney, Julian Taylor and Aleksi Campagne.

And there are conversations with folk veterans such as Garnet Rogers, Ken Whiteley and Lennie Gallant.

In fact, the Just Us Folk series is already starting to feel like a year-book for Canadian roots music, a collection of written snap-shots capturing the new music that came out during the year and what was going on with the artists who were making it.

Asked if he plans another one next year, Jan said if he has another handy cache of articles to publish, there’s a good chance he will.

“I made tens of dollars off the last one,” he joked.

Just Us Folk: The Long Haul is available though Amazon, in print and Kindle editions.  You can also order it directly from Jan by emailing him through the Just Us Folk website: https://justusfolk.com/.