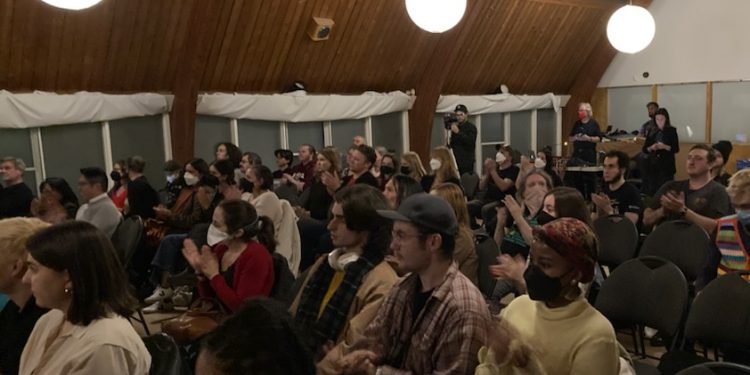 Musicians have long been at the forefront of environmental activism.

Bruce Cockburn, after all, released “If a Tree Falls” back in 1988, which recognized that forests were the “climate control centres of the earth” and beef cattle were “methane dispensers.”

But careers in music can also be carbon intensive, especial for artists that tour extensively and draw large crowds to their shows.

So what is the role of artists in fighting climate change?

That was the focus of a first ever climate summit in Toronto on Friday, organized by Music Declares Emergency Canada, a two-year-old organization calling on the government to get to net zero by 2030 at the latest and committing to address the music industry’s contributions to the climate crisis.

About 70 people took part in the day-long event, according to Liv Cazzola of Tragedy Ann and the Lifers, an organizer with Music Declares Emergency and the moderator of one of the panels at the summit.

‘I came out of it with a lot of hope’

“The goal was mostly just to get together people that we knew would be interested in learning more about this,” she said.

“I personally felt like I came out of it with a lot of hope because there was that ability to see people gather together and to feel them react to everything that was said, and you just can’t get that same feeling with a Zoom.”

The event took place at the 918 Bathurst Centre for Culture, Arts, Media and Education, and it took the form of a single stream of activities – no breakout groups.

Artists talked about the need to scale up sustainable models for merch supply, Liv said.  They heard from Fashion Takes Action, which works to advance sustainability in the fashion system.

They also heard from a company called Plus One that adds a dollar to each ticket sold for a given event and allows artists to direct it to a charity of their choosing.

‘we really need the government to be on board’

Musicians also talked about their desire to have a fleet of electric touring vehicles available to them.

“The most frustrating part for me, personally, was just understanding that there’s industry-wide efforts but truly we really need the government to be on board for all of this as well, in terms of funding, in terms of policy,” Liv said.

“Right now, a lot of levels of government are not courageous enough to make those bold steps.”

Artists at the event talked about the need to share the burden of fighting greenhouse gas emissions in the city – that it can’t all be on them.  Funders and labels need to be on board too.

The conference, in fact, featured a panel with funders, and both the Canada Council and the Ontario Arts Council told attendees that there is flexibility in their programs to fund sustainable initiatives, Liv said.

No Music on a Dead Planet

“I’m getting a lot of hope in terms of those, let’s say, answers to calls for how to make things more sustainable,” she added.

At one point, Sarah Harmer spoke to attendees through a video she’d prepared, and encouraged artists to amplify the work of local community groups from the stage.

“It helped solidify in my mind the fact that music moves us in ways that scientific facts can’t,” Liv said.

Liv and Tragedy Ann performed Friday night as part of a post-summit concert and panel called No Music On a Dead Planet.

Here are the award winners from this ...