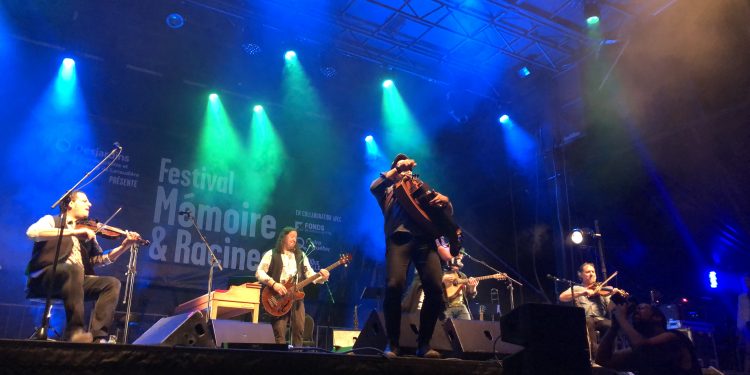 It’s been five years since Québec’s stunningly talented and charismatic fiddler, André Brunet, joined the lighthouse band Le Vent Du Nord, so we thought it would be a good time to chat and reflect on his life in music so far.

In 1997, André joined Québec’s biggest trad music band, La Bottine Souriante, and spent 10 years touring with them, followed by the trio, De Temps Antan, with Eric Beaudry and Pierre-Luc Dupuis. All three were alumni of La Bottine Souriante, but the trio format offered more performance flexibility than the huge big band. Early in 2017, due to the family and career commitments of Eric and Pierre-Luc, it became clear that De Temps Antan would remain a part-time band, so for André, who really wanted an international touring career, a change became imperative.

Réjean, after other band experiences, had joined Le Vent Du Nord in 2007. For years, André had known the other LVDN members well. He and Nicolas Boulerice had grown up in the same community, and André had been a guest artist in LVDN concerts several times. There were years of connection, André had listened extensively to their recordings, and for some years, the band members had been hoping he would join them.

And finally, in 2017, the marriage happened. André joined Le Vent Du Nord. He and his brother were back together, playing in the same band again and André achieved his dream of being a full-time musician, touring the world and contributing creatively to what is perhaps the best traditional music band that has ever come out of the Québec scene.

When André joined, they all spent three days together at a tiny venue in upstate New York (The Nelson Odeon), where they could rehearse before they performed as a five-piece band for the first time. That concert was billed as Le Vent Du Nord, and about 100 people attended, but almost nobody knew that they’d witness André’s debut with the band. Needless to say, the performance was even more spectacular, and performances ever since have been absolutely stellar.

It’s a very democratic band, said André. “We have the same passion together. It’s great to be full-time, professional musicians.”

They recorded their latest CD, 20 Printemps, over eight days in a Montréal studio.

“We took lots of time to get things right,” said André. “We used pre-recording to help us practice at home. There was a lot of time during the COVID lockdowns.”

All of the band members made good use of the dark times during the pandemic, and now they have a new way of preparing for recordings, using the technique of pre-recording, practicing at home, then polishing and adding when they get to the studio.

Speaking of the lockdowns, there were performances before cameras with no live audiences.

“It took quite a bit of practice to visualize the audiences online,” André said. “You must convince yourself. It’s not so bad to figure out. We were a bit fatigued about doing a show in front of nobody. We were feeling well when we were playing, but before and after was really exhausting!”

“In a normal tour,” Andre said, “ we are meeting people, jamming, travelling, moving to another town tomorrow, planning the next tour, figuring out logistics. Not doing this was not fun for us. You convince yourself that you’re doing well, that you’re not depressed. You have no choice but to keep on going. This has given us a chance to know how it was 100 years ago, during the Great War and the Spanish Flu pandemic.”

Touring 20 Printemps is going very well, André said. “We have the UK, Scotland, the Shetland Islands, France, United States… then we tour Québec just before Christmas. We will have 20 concerts in different halls.”

A local tour of that size is an immense achievement in the band’s home province.

“It’s great to see trad music coming back,” André said. “There is a great movement in Québec this year. The Culture and Communication Ministry has money available for Québec traditional music. It’s about time! We are very happy to see that, and we hope that more money will be there. Festivals that specialize in jazz or some other musical forms can now ask for money to have a traditional band.”

“We see that kind of thing happening this year,” André said, “and we hope it will continue because it’s really important!  We love to call this music our national music. The [Québec] government doesn’t see it the same, but if we say it, and the more people we are, the more we can travel the phenomenon, and say, ‘This is our music, and this is our reality.'”

It’s fantastic these days to see audiences so excited about the traditional music of Québec. No matter where the band performs, audiences are on their feet dancing. Several new tunes from 20 Printemps are really getting the audiences engaged.

Said André, “My favourite piece from this album is ‘Ma Louise.’ I love the way it is built and love the way the audiences sing along.”

No matter what language they speak, the audiences respond with abandon.

“And ‘Le Tour du Monde,’ a jig and two reels, is just simply great dance music,” said André. Nobody remains seated, that’s for sure, whenever and wherever Le Vent du Nord performs.

After this first five years with Le Vent du Nord, it’s quite apparent that André is delighted. Passion and creative collaboration with a group of other superb musicians of equal calibre was just what he was looking for, and when we saw his first performance with Nicolas, Olivier, Réjean, and Simon in that tiny theatre in upstate New York, we knew the decision was a very good one.

We can’t wait to see what André and the guys get up to in the coming years.