The Folk Music Ontario conference, 2022: what worked and what didn’t 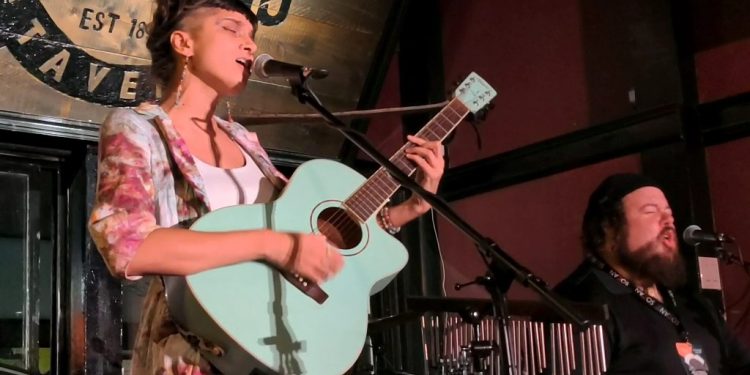 Alysha Brilla showcasing at the Richmond Tavern during the 2022 Folk Music Ontario conference.

The first full-on Folk Music Ontario conference after two years of COVID-19-related cancellations came together in about half the usual amount of time, so it could’ve been forgiven for not living up to its usual standards.

Instead, I think it’s fair to say it exceeded expectations on many fronts.

New FMO executive director Rosalyn Dennett deserves a lot of credit for pulling together a crack team to make it happen as well as it did and giving it an incredible foundation to build on.

Here are just some of the things that made it great.

1.  A single stream of daytime showcases in a massive ballroom with stages at each end. One act set up while the other performed, so there was zero lag time between acts. Apart from being an efficient use of time, it gave at least one act, Taylor Abrahames, a chance to grab the attention of people who had come to see the previous act before they left the room. How have we not already been doing this every year? There is a – sort of – down side, in that the daytime acts need almost super human stage presence to take command of the entire room, the size of which some are unlikely to actually play for quite some time. However, on the plus side, when you see an act like Taylor do it, you know you’re dealing with someone who is capable of carrying your festival stage.

2.  Group therapy. So many conversations happen in hallways and over meals at these conferences about the psychological work of being an artist – balancing the joy of creating and the belief in art for art’s sake with the need to earn a living and participate in the hustle. Creating a formal space at the conference to support each other through this process was a stroke of genius. Heck, why only do it once a year. How ’bout monthly Zoom sessions?

3.  The simplified website design, making it easily accessible on smart phones. I found it really easy to navigate – more so than many purpose-built apps – and it was nice to be able to click an artist’s name and get their bio. I heard some people say they’d like the option to pay for a print-out of the proceedings, and perhaps that would be helpful for some (I wouldn’t’ve minded something large enough to read without having to keep putting my glasses on). But over all, I thought it was really good.

4.  The attendance! I did not expect to see this many people out this year, and while some of the elders of our community were conspicuously absent and missed – Richard Flohil, the Laskins, Bill Garrett, Ariel Rogers – some were there (Chris White, Paul Mills, Derek Andrews), and so were multiple generations of new leaders and mentors like Julian Taylor, Braden and Liv from Tragedy Ann, Treasa Levasseur and Amanda Rheaume. It was also great to see the interplay between these multiple generations and the reverence for those who came before – notably when Paul Mills led the conference team in a rendition of “The Mary Ellen Carter” to close the Ontario Folk Music Awards.

5.  Speaking of the awards show, what a great event!  The idea of condensing the Songs from The Heart concept into a few key prizes and actually giving it a proper ceremony was a good one. And the execution was flawless.

6.  The earlier end-times for the late-night showcases. I don’t know about you, but two years of COVID has aged me, and I had to really work at those late nights at the best of times.

All in all, it was an epic return for FMO.

Really, I have no major complaints but a few minor quibbles.

1.  The thing I heard most consistently from people, and a complaint that I share, is that holding showcases off-site is just not as enjoyable or practical for people as holding them all in the hotel. Yes, I know, folk conferences are the only conferences that do this, but we’ve been spoiled by all the conferences fully contained within a single building. My understanding is that the old format has raised insurance concerns in the era of COVID, but with more time to plan, perhaps FMO can find a venue that allows for a range of later showcases in suitably-sized spaces. To be fair, I thought the London Music Hall of Fame and the room at Fanshaw were both terrific venues. So once there, I enjoyed the ambiance – especially at the hall of fame, which was cozy and intimate and had a terrific collection of displays to check out between sets. I was less enthused about the Richmond Tavern though. It was your classic noisy bar, and loud enough at times to call for ear plugs (who brings earplugs to a folk conference??) Add to that the fact that it was pretty chilly out, and we were having to navigate an unfamiliar city in the dark, and I think it discouraged some people from checking out the shows. That was the sense I got from a few people I spoke to.

2.  The focus of some of the workshops could stand to be fine tuned. I really don’t want to winge too much about this because I was overjoyed to see so many relevant topics on the agenda. And I know there wasn’t much time to pull things together. But with the benefit of more planning time, it would be great to focus the panel discussions by articulating an objective and planning the discussion around achieving it. Without that, I thought some promising sessions felt a bit scattered, like a wasted opportunity.

3. So few masks. This one’s not on the organizers. It’s on us all collectively. I know we all want COVID to be over, but I hate to say this: that might NEVER happen. So we need to look after each other, especially our elders, and especially artists, whose careers could be ended by a case of long COVID, which affects 10 to 20 per cent of people who catch this virus. Some people in our community are already really struggling with this. No, masks are not even close to 100 per cent effective. Ideally, we’d all be in N95s, which offer substantial protection. But if we want members of our community to stay healthy, and if we want to avoid a never-ending series of concert cancelations due to illness, then we need to do everything we reasonably can to stop getting sick and making other people sick.  If we all do a little, it prevents a smaller number of people from paying a much higher price.

4.  Some managers expressed concerns about what they felt was a relatively low number of promoters at the event. On one hand, a decent number of Ontario festival promoters were present, either virtually or in person. Those included Summerfolk, Mariposa (though artistic director Liz Scott was not on the delegate list), Home County, Live from the Rock, Ottawa Grassroots, Peterborough and Goderich. There were also a couple of out-of-province festivals: Mission, Celtic Colours and Alianait. And there were a decent number of folk club presenters on-hand, including Acoustic Harvest, Brampton, Haliburton, Georgian Bay, Sleeping Giant (Thunder Bay), and New Market. Calgary’s Fish Creek Concerts was also registered. But yes, there were some conspicuous absences:  Hillside, Sunfest, Festival of Friends, Trout Forest, and yes, Ottawa CityFolk, although the latter is a more corporate event that is arguably “folk” in name only (if we define folk based on community connections as was suggested during the “What is folk?” workshop on the weekend).  What’s more, FMO, once drew a bevy of folk music artistic directors from across Canada, something it hasn’t done for a long time. There is definitely an argument to be made that a conference that wants to keep drawing registration fees from large numbers of artists and their personnel is going to need to also draw in the presenters with the budgets to hire them all. Fortunately, if this weekend was any indication, I think new ED Rosalyn Dennett is up to the task. Besides, if future FMOs build on the successes of this one, the Terry Wickhams, Kerry Clarkes, Chris Frayers, and Steve Edges of the world are not going to want to miss them.

Heather’s 5 favourite showcases at the Folk ...