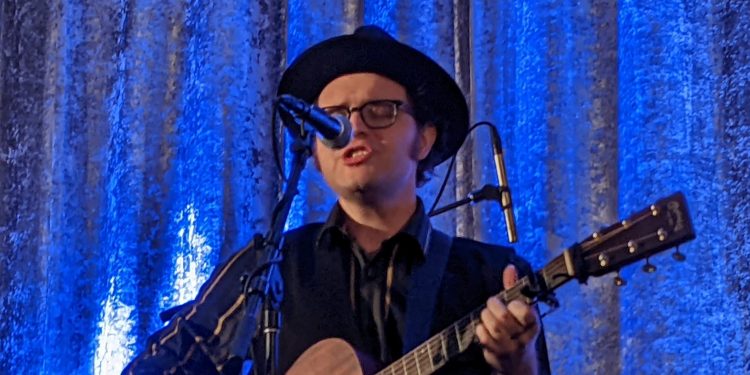 I referred to these guys as a Quétrad band on Saturday. I stand corrected. They are dyed in the wool Franco Ontarians through and through. Sorry guys!  This merely serves to make my point that I knew nothing about them when I went to see them on Saturday. They’re like the Franco-Ontarian equivalent of the Pogues or very early Spirit of the West. How can you not love a band that takes the fiddles and call-and-response songs of trad music and pairs them up with a rock n’ roll rhythm section and punk rock energy. Watching these guys bounce three feet in the air while singing this stuff is awesome.

A relative unknown to many in the room based on my conversations with people, Taylor is both a singer-songwriter and voiceover artist who has clearly put a lot of work into caring for and cultivating that voice. His sings in what sounds to my untrained ear like a high tenor and can imitate Michael Jackson perfectly (he gave us a demo) but his own music is more of a mixture of folk, pop, blues and soul. What’s more, all that work in TV and film has clearly taught Taylor how to be an entertainer and not just a performer. He grabbed the audience’s attention from his first moment on stage and held it ’til the end. Oh! And did I mention he’s a rock solid guitarist too?

Reading the mini bio of Janice Jo Lee, I found plenty of descriptors that appealed to me: poet, musician, radical, folk, soul – but it was hard to imagine how it would all come together on stage. The word “carnival” comes.to mind. Janice’s varied set started with an upbeat opener that featured her on horn and included an awesome performance poetry piece about returning to work on Zoom earlier in the pandemic and a Korean-language song about the climate crises. Janice is a confident performer who wears her politics on her sleeve, often coupled with humour. “Let’s talk about climate change,” she said (warning: I’m quoting from memory here. I can’t promise these were her precise words.) “No Janice, let’s bury our heads in the sand and pretend it’s not happening,” she replied in the voice of a fictitious, clueless fan. We could really use more overt politics in folk music these days given the times we live in, so Janice is a breath of fresh air. I’d pay to see her again.

An alumnus of one of the world’s top Balkan brass bands, this Macedonian horn player recently settled in Canada and has set up his own Balkan brass band with members of his own family and some of the best accompanists Toronto had to offer. In addition to being a world class horn player, he’s also stunning vocalist. His set on Thursday night had the London Music Hall of Fame crowd dancing and singing along.

Often you hear a band on record and they fail to make an impression.  “Nice enough stuff,” you think. “Nothing wrong with it.  Totally credible. Just doesn’t knock me out of my chair.” That’s my recollection of hearing the Honeyrunners up to this point (to be fair, I haven’t heard much from them).  So I didn’t go see their showcase on Thursday night.  But on Saturday, they were a last-minute substitution for Njacko Backo at the Richmond Tavern, so I caught a good portion of their set. “Who the heck is this band?” I thought, enjoying the wildly hooky roots-rock songs and great harmonies. I literally went through the photos of the acts on the FMO website on my phone, until I found the photo that matched the band. My fist impressions have now been eaten. They are an outstanding live act.

Heather’s 5 favourite showcases at the Folk ...