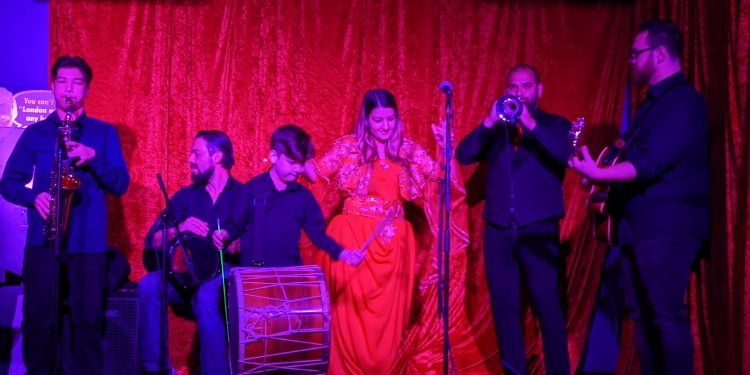 The 2022 Folk Music Ontario conference is now a happy memory, and it’s time to look back at some of the highlights. There aren’t many surprises here. My favourite shows this weekend were, for the most part, by people already well-lauded for their recent work; in case anyone was unaware, it’s extremely difficult to score a Juno nomination and even harder to win, so odds are, if you’ve gotten that far, you’re at the top of your game. Here’s who stood out.

Definitely no surprise here. These 2021 Juno winners have it all. They’re incredible composers and arrangers whose work is at once complex, varied and accessible – shifting between high-energy instrumentals, vocal numbers featuring joyful harmonies, and tender moments in which Elizabeth Rodriguez’s stirring violin takes centre stage. The only thing the record doesn’t prepare you for is Elizabeth’s charisma. At one point she tells the audience that she recently became a Canadian citizen – news that is greeted with applause from the crowd – and informs us that the country scored itself some “flavour” in the process. No shit!

Julian was one of two artists this weekend who made me tear up, in his case when he sang his new song, “Murder 13” – about the murder of his best friend – and spoke about how, despite his parents working hard to protect him from trouble, the majority of his Black friends from the white neighborhood he grew up in are now dead or in jail. I was still feeling the heaviness of that truth well into the evening. Julian opened his set with one of my favourite songs of 2020: “The Ridge,” and followed it up with the powerful new single “Seeds,” a response to the discovery of human remains at the site of the former Kamloops Indian Residential School. He also had the audience singing along on the “la la la” chorus of “Ballad of a Young Troubadour.” It was a great set from beginning to end.

This is the one surprise on this list. For as long as I’ve worked in the folk and world scenes – that’s more than 25 years now – I’ve marveled at our good fortune here in Canada. Among the immigrants and refugees who come here every year are Beijing Opera soloists, leaders of national orchestras, and other artists at the absolute top of their professions in the counties they came from. And despite the fact that many can play circles around our top symphony performers, whom we might pay more than $100 to watch, the price of watching them perform in all their splendor is frequently a $20 ticket to a community theatre. Expect to find Nizo Alimov on that world music circuit real soon. An alumnus of one of the world’s top Balkan brass bands, this Macedonian horn player recently settled in Canada and has set up his own Balkan brass band with members of his own family and some of the best accompanists Toronto had to offer. In addition to being a world class horn player, he’s also stunning vocalist. His set on Thursday night had the London Music Hall of Fame crowd dancing and singing along.

Tania was the other artist this weekend who made me tear up with her live performance of “Planks and Marietta,” inspired by the murder of George Floyd. Again, I was not surprised that Tania proved to be a standout. Her latest EP is chock full of goodness, and her live show did nothing to lessen my positive impression of her. In fact, it made me a bigger fan. Her opening number, “Who I Am,” is a vulnerable one that establishes intimacy with the audience right away, and it’s all up hill from there.

Yet again, no surprise. I already knew Morgan was a great fiddler, singer and purveyor of “Mi’kmaltic” – his word for fusing Celtic and Mi’gmaw traditions. This weekend proved he’s also a great entertainer and storyteller. I wasn’t expecting him to be as funny as he is, but he is a Maritimer so maybe I should’ve been.