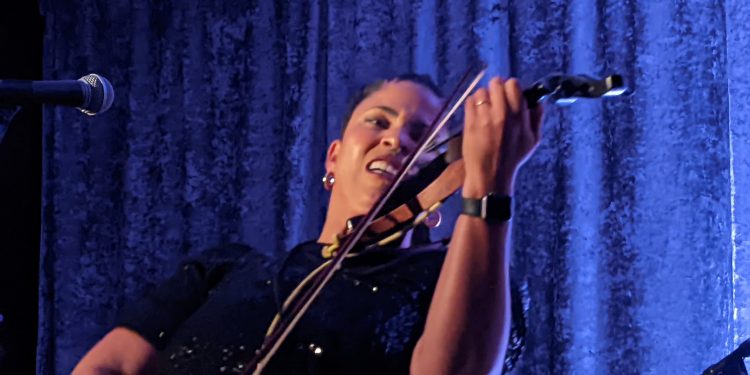 6:24 p.m.: When I walk into the showcase room where Janice Jo Lee is performing, she’s in the middle of a funky, upbeat number that sees her alternating between singing and playing the horn. Her band consists of keyboards, bass, cello, guitar, percussion and gayageum (Korean zither). What a mix! I love arty, innovative music so immediately, I’m loving it. Next Janice launches into a performance poetry piece about returning to work online during COVID, and then a Korean language song about climate change. Janice has a powerful, versatile voice, and she’s a fantastically confident entertainer who is at once funny and fearless in expressing her anti-oppressive politics and concern for the environment. Near the end of her last song, the entire sound system comes unplugged, and she carries on acoustic, barely missing a beat. 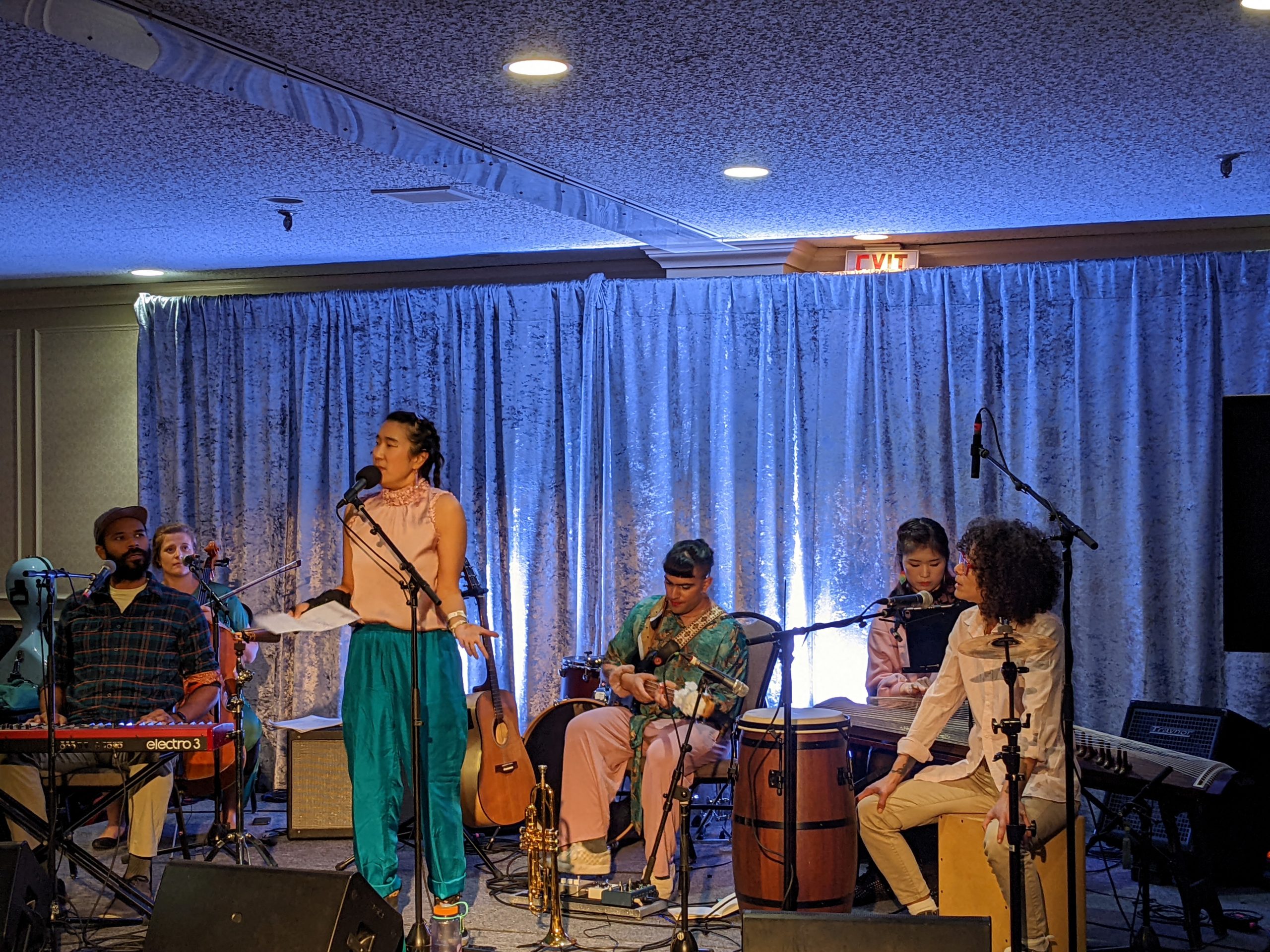 6:37 p.m.: Okaaaaay, I’ll go see Le Diable a Quatre. Twist my arm. (I’m being sarcastic here. I already know this band is great, and I’m  looking for new discoveries. But the rollicking sound of Quebecois trad music and people clapping in time draws me into their showcase suite for the last couple of songs.) Everyone in the room is already on their feet. “Ok, we have about three minutes left so we’ll play fast,” I hear one of the band members say. And then they do just that.

6:45 p.m.: Flavia Nascimento is fronting Tio Chorinho in a small, half-full showcase suite, but she’s performing like she’s playing a freaking stadium. When industry people tell artists to always perform at their best, no matter how small the show, because you never know who’s in the audience, they should hold up this woman as a role model. What a fantastic performer she is. And what a voice!  The Canadian band is devoted to “the new Orleans jazz of Brazil,” and Flavia is a brilliant ambassador for it. 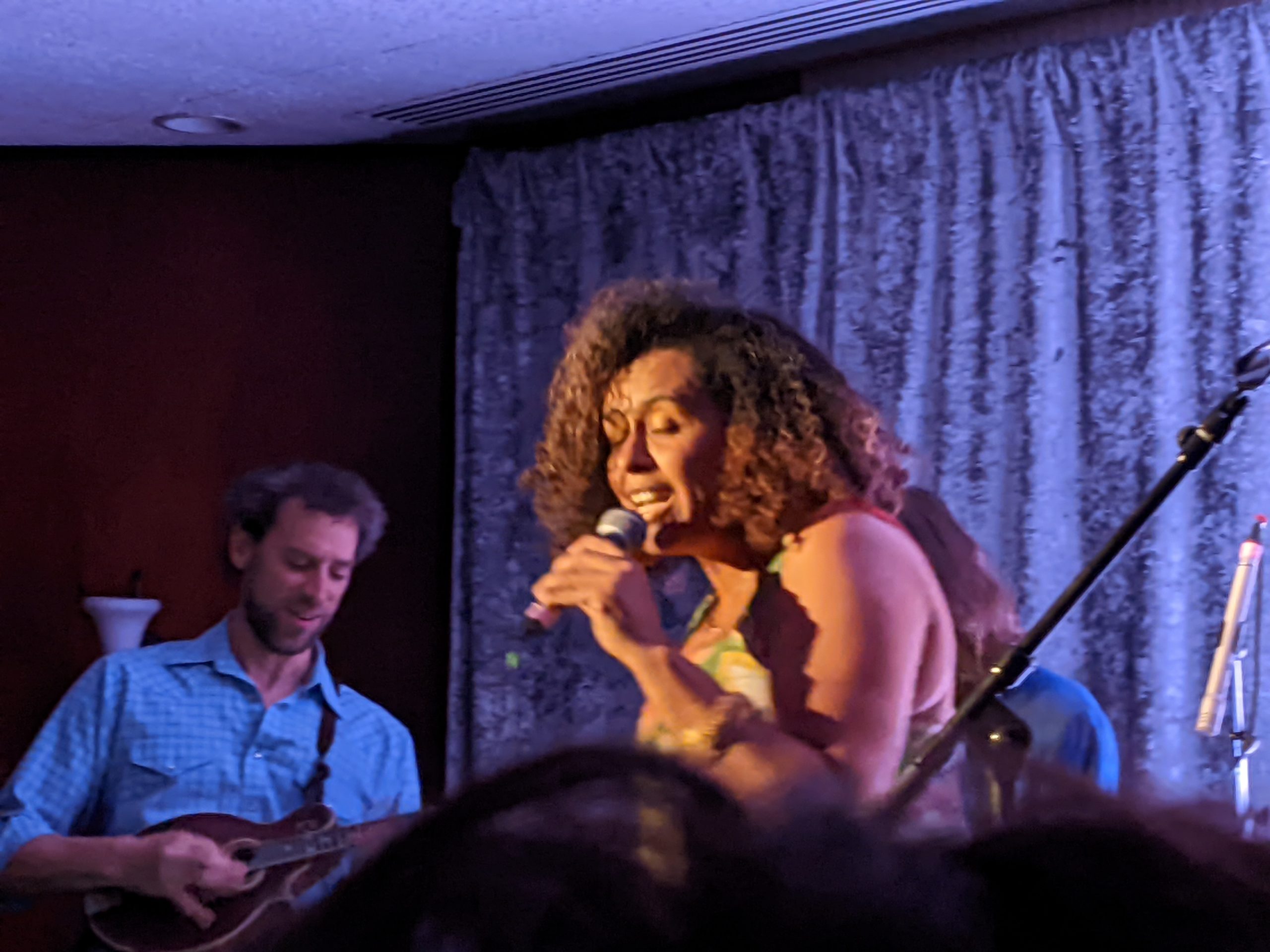 8:56 p.m.:  How has Morgan Toney only been playing fiddle for three and a half years? Watching his fingers fly across the bridge in his final set of reels, you’d think he’d been playing since childhood. Morgan’s set is one I’ve looked forward to all weekend, and it doesn’t disappoint. This young man is such a talent – a ridiculously skilled player and singer who also told us some great stories. Take for instance the one about the legendary fiddler who wagered a $5,000 performance fee on whether he could get the audience to stand during his opening number. He then opened his show with the national anthem. 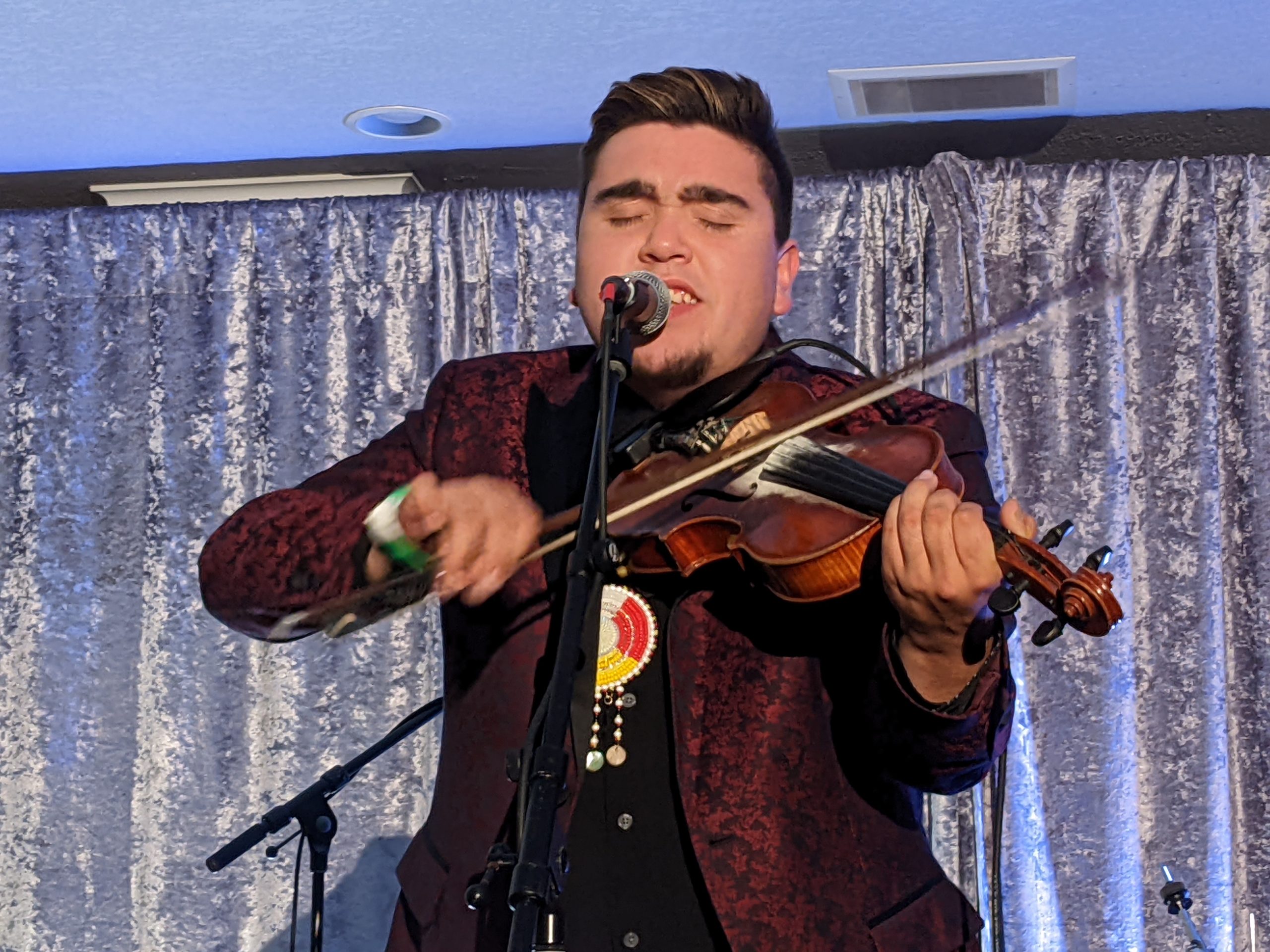 9:41 p.m.: Time now for a show I’ve been waiting for all weekend: Okan, 2021 Juno Award winners and all-round insanely talented Afro-Cuban ensemble fronted by the wife and wife duo of Elizabeth Rodriguez and Magdelys Savigne. As expected, the set is a bonkers display of virtuosity and showmanship. The opening numbers showcases the pair’s astonishing vocal harmonies and Elizabeth’s lighting fast violin work. Later Magdelys and drummer Frank Martinez trade solos in a pretend duel. The crowd in the packed room is loving every minute of it. Elizabeth is a charismatic entertainer who, at one point, tells us she’s now, officially, a Canadian citizen, which means she’s now allowed to complain. With that, they launch into a song about how hard it is to be an immigrant. 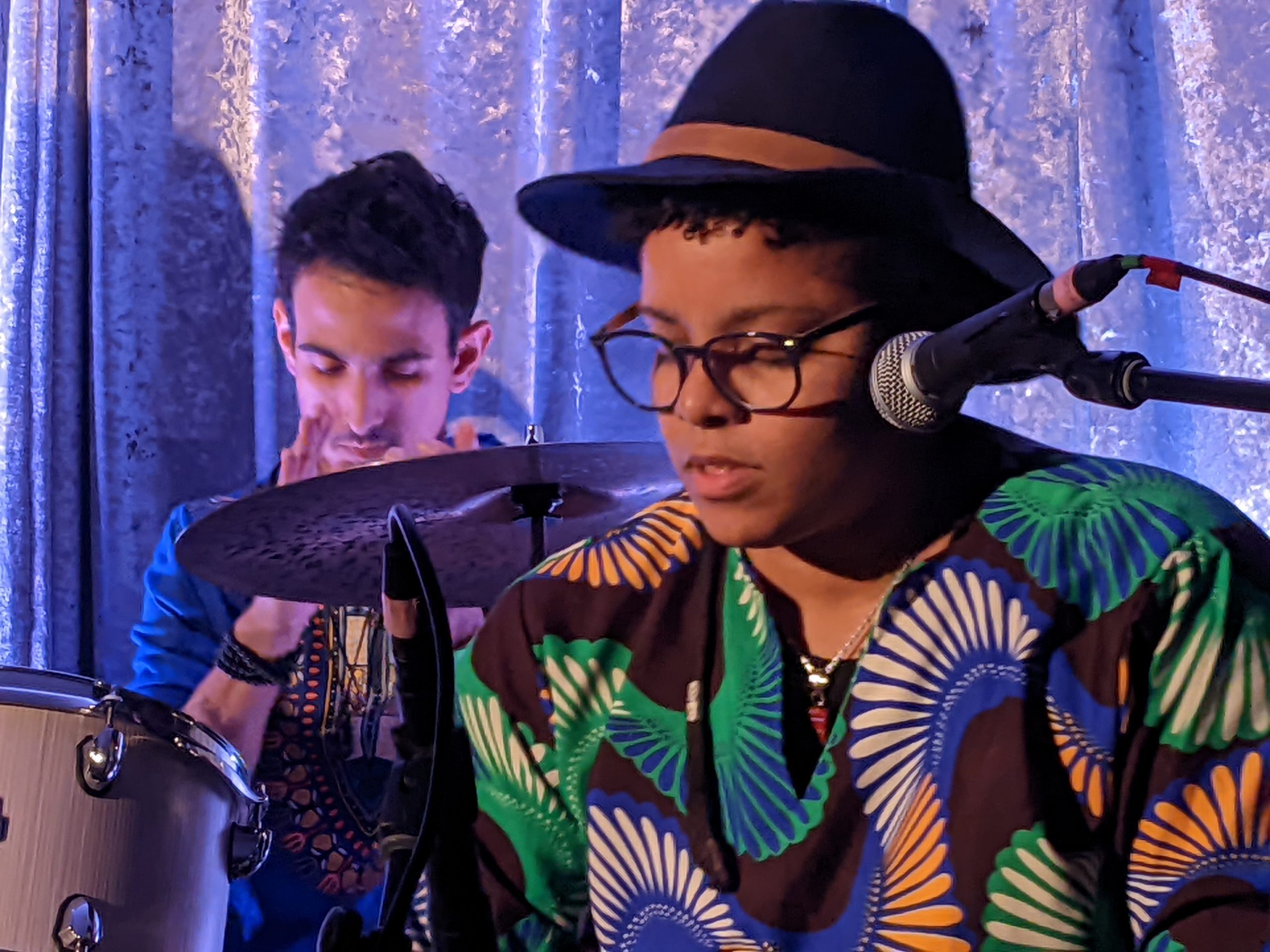 10:42 p.m.: Mimi O’Bonsawin has just wrapped up her set at the Richmond Tavern, opening the spotlight showcases here for the evening. Much to my delight, she sang her newish single “Here’s to the Women,” which I think is probably her strongest one yet.

I’ve decided to settle in here at the Tavern this evening rather than jumping from venue to venue, because there are several acts I want to see here, and when you factor in the time it takes to walk between venues, there’s not much point in trying to catch other things. Sadly the Richmond is my least favourite of the venues – your classic bar with noisy patrons yacking in the back. 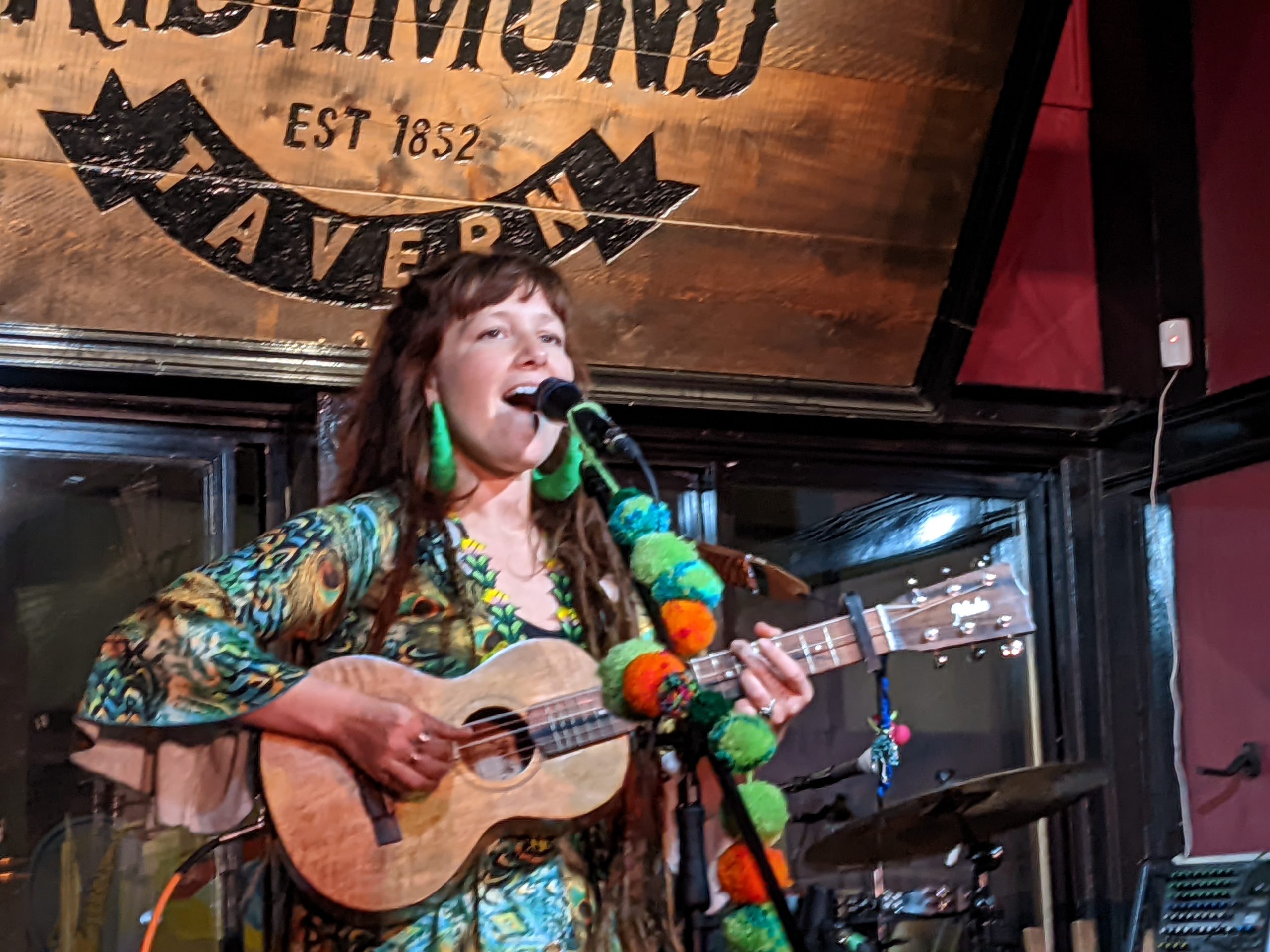 They simmer down a bit when Jeremy Voltz launches into his singer-songwriter set, but it’s by no means quiet back here. Fortunately, Jeremy can hold his own in a loud crowd. He’s a confident and personable entertainer with some unique songs that draw on jazz and perhaps even a touch of reggae.

11:25 p.m.: Marc Merilainen of Nadjiwan dedicates his set to all the Indigenous people in the room then launches into an absolutely hypnotic performance, his deep, resonant vocals speak-sing at times over heavy electric guitars. Try talking over that, suckers in the back of the bar.

The volume of Nadjiwan’s set contributes to its almost trance-inducing energy, but it also leaves me a little uneasy about the effect on my hearing. I notice my table-mate, Rachel, is stuffing tissue in her ears, and I decide that’s a good idea and get some paper towel from the bar to do the same. Note to self: the days of not bringing ear plugs to folk conferences are officially over. 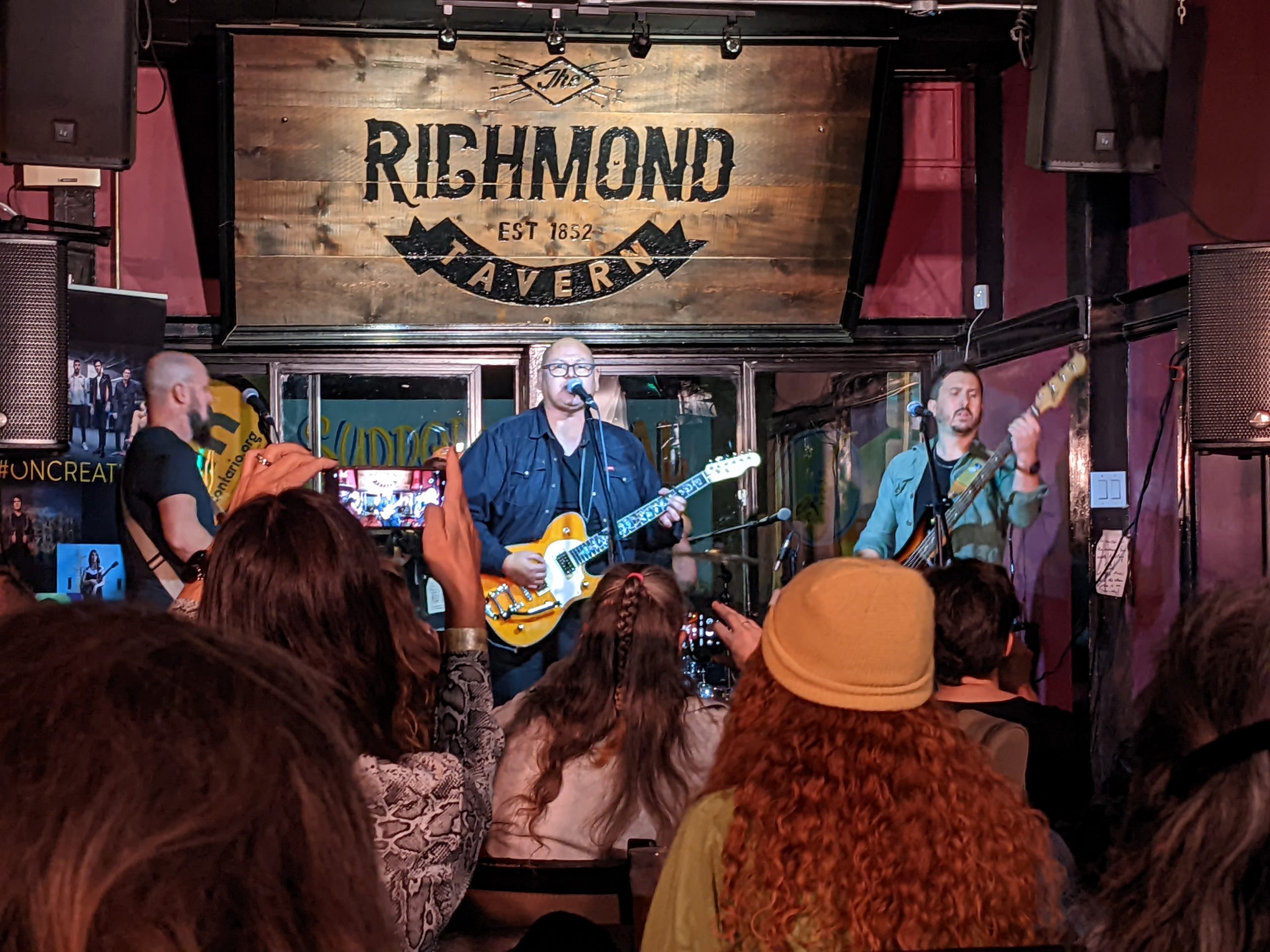 11:54 p.m.: Having pledged to stay in one place this evening, I decide to take leave of my senses and head over to Fanshaw to catch Status/Non Status. I really want to see them, and I figure I could catch a solid 15 or 20 minutes before coming back to see Tania Joy. Alas, Fanshaw is running more than 15 minutes late, so I decide not to chance it. I come right back expecting to hear Njacko Backo, but instead it’s the Honeyrunners, and holy shit are they good!  Honestly, I didn’t go see them on Thursday because I wasn’t blown away by the recordings I’d heard. They sounded like a pretty typical roots rock band. Which they are, but this is a band that was born to be seen live, and they’re well-suited to a bar like this. The songs are fantastic – great hooks – and the energy is infectious. I’m not sure who’s to blame for them running over time though. That’s not cool. 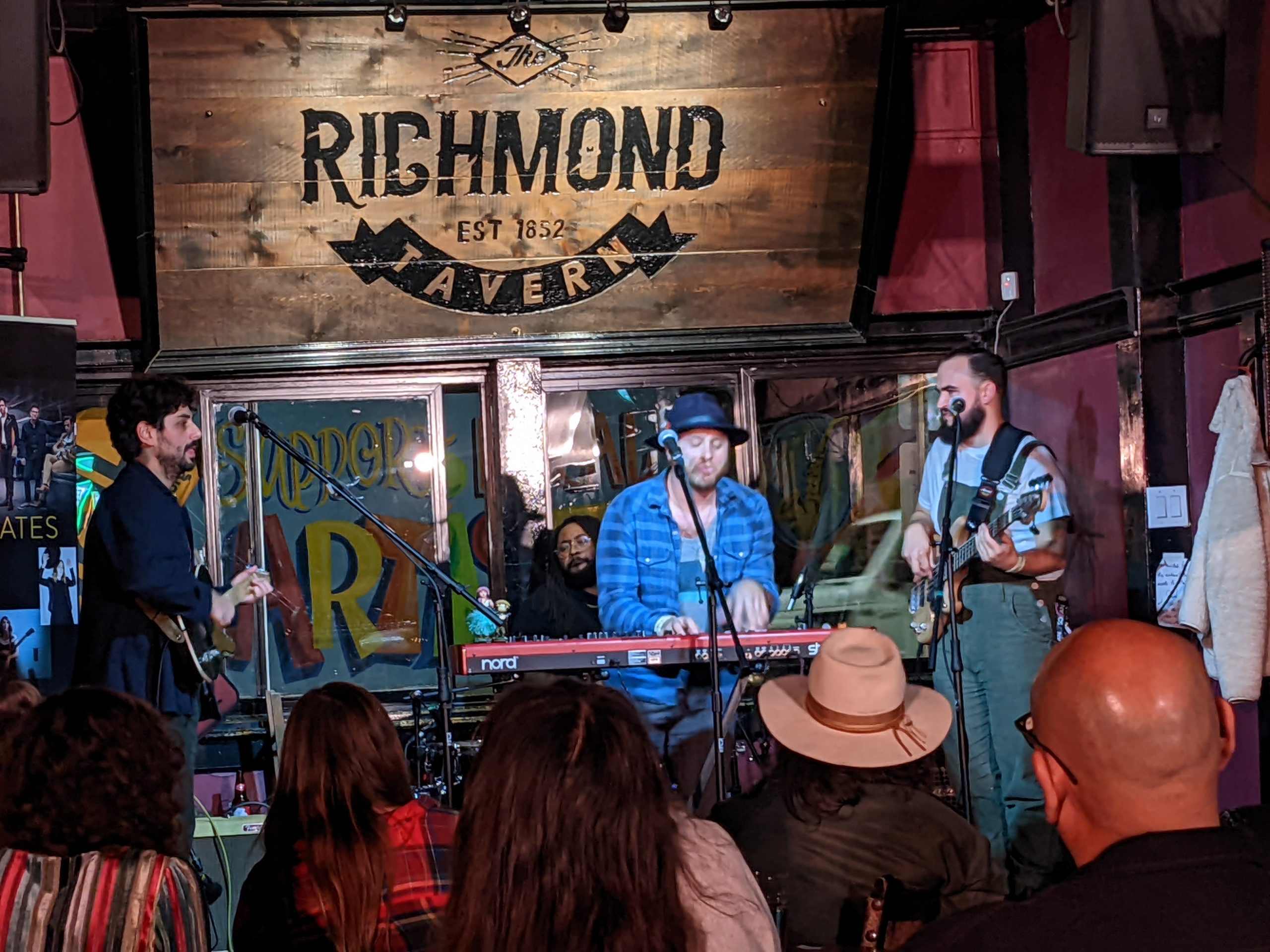 12:30 p.m.: Tania Joy is finally on stage, and damn she’s sounding fantastic. She opens with “Who I Am,” a vulnerable song about how hard and scary it is to be an artist and, let’s face it, an adult human in this world. The third song in her set is the arresting “Planks and Marietta,” written after the murder of George Floyd, which she introduces as her first act of speaking out against the racism in her life. The song feels even darker and more powerful live. It makes the hair on my arms stand up, and I feel tears welling up in my eyes. After the song, Tania graciously thanks her band and the folk community for its support and ends the set with an upbeat number inspired by caring for her dad.

Speaking of support, can I just say, I have spotted Tania Joy EVERYWHERE this weekend.  I’ve seen her in workshops. I’ve seen her in the daytime showcases for lengthy periods of time. I’ve seen her at the late night showcases on Dundas and Richmond.  In short, this woman has been out supporting her fellow artists like crazy this whole weekend. I hope she gets this kind of support in return. She deserves it. 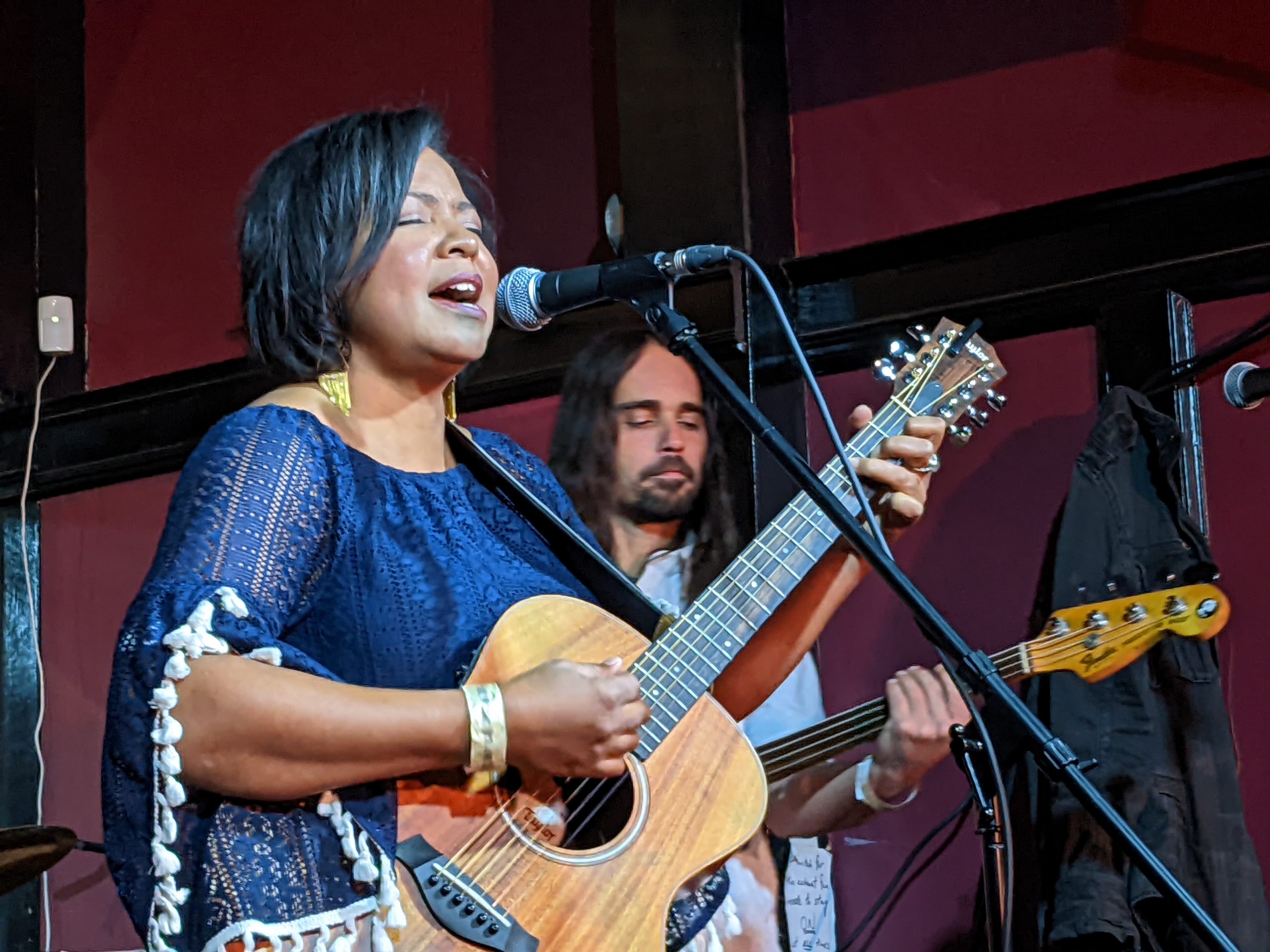