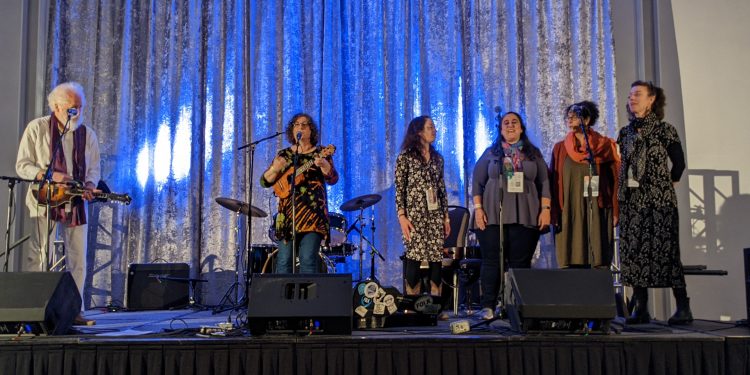 12:15 p.m.: It’s that time in the conference weekend where the need for sleep is starting to take precedence over the desire to go to things. I wanted to go to the queer peer group this morning, but it turned out my body didn’t want to get out of bed. I’m now sitting in room 1815, the wellness suite, while a diffuser spreads a calming scent into the air and around 15 people sit in a circle on sofas and talk about the struggle to love and support themselves and be true to their artistic processes while working in an industry that depends on appealing to others. I’m not going to repeat what is said because it was essentially a group therapy session, but it’s nothing you can’t imagine if you’re creative yourself. All I’ll say about this session is that it’s such a peaceful, supportive space that I don’t want to leave. Every FMO should have these spaces as a necessary antidote to the hustle happening outside their doors.

1:21 p.m.: Janet Jo Lee is performing a spoken word piece about what folk music is at the panel about what folk music is. Chris White has just sung a four-line song about the same. I really can’t think of anything more folk than that, whatever that word means. Morgan Toney offers us a metaphor from Mi’gmaw culture: a circle in which there is a place for everyone. 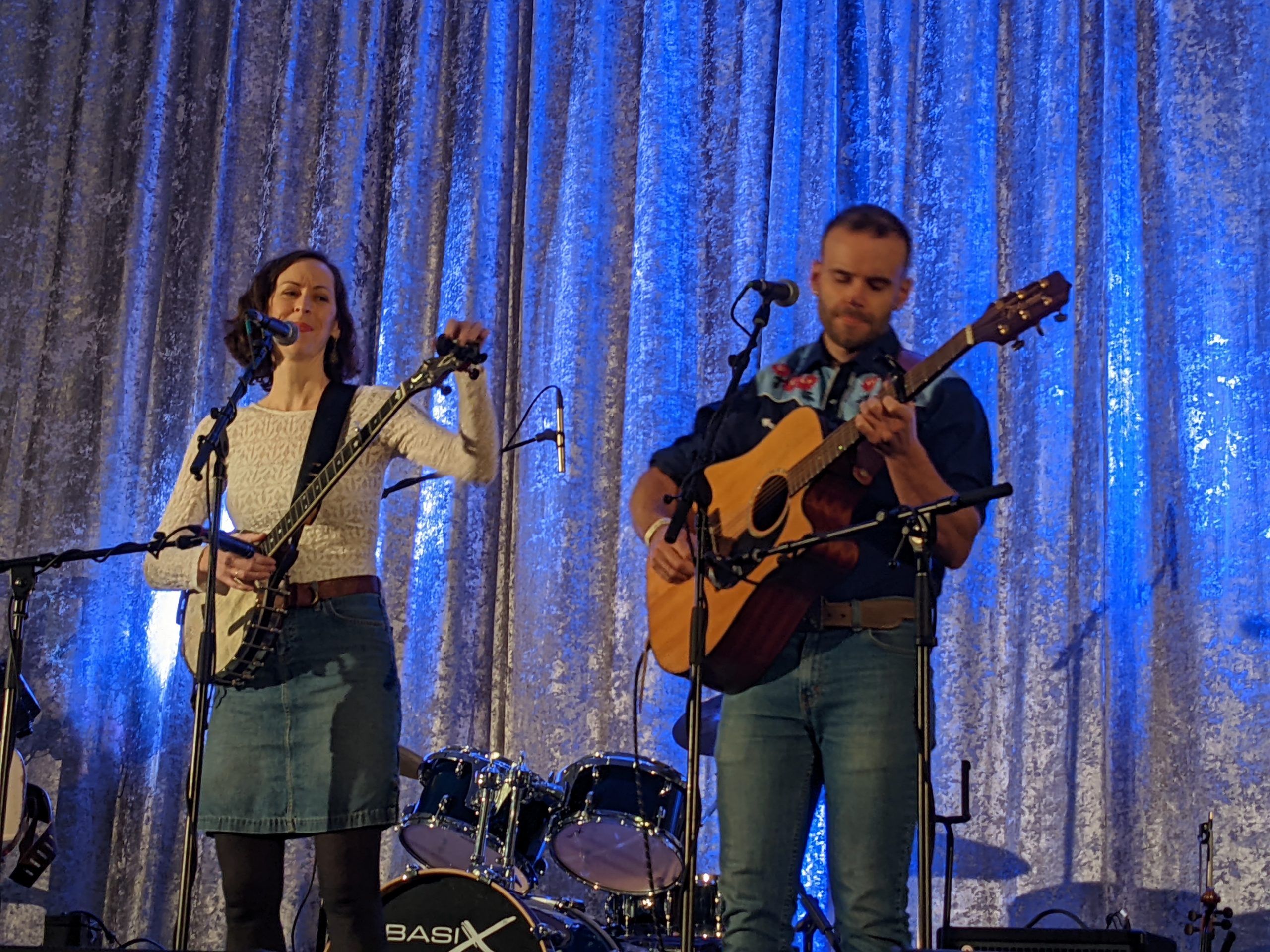 There is no question that the workshop has a philosophical rather than practical feel. At one point I ask how the artists define their audiences for marketing purposes. Janet Jo Lee offers a response before moderator Treassa Levasseur suggests we give ourselves permission to consider the question outside of the capitalist context. Look, I’m as critical of late-stage capitalism as anyone else in this room, but this is a $400-a-ticket event that exists to help artists make a living from their music, so it seems a little hypocritical to shut down that conversation. I do find myself a bit frustrated with the moderation in general. Panelists are not given an equal opportunity to answer the questions and are sometimes just asked to comment on a random assortment of thoughts. To the extent that a consensus emerges as to what folk music is, the common thread seems to be music being made in community. Obviously, this begs further discussion – how do you then reconcile this with the business of folk music? What makes us different from, say, heavy metal, which is also a pretty tight-knit community? – but conference panels seldom do more than scratch the surface of a topic, and this one is no exception.

2:20 p.m.: Aw. Tragedy Ann are opening their set with “Birthday Book,” a song about the late London town crier, Bill Paul, who died last year. Bill was renowned for keeping a book containing the names and birthdays of more than 10,000 people he’d met throughout his life and phoning every one of them on their birthdays, a task that took him hours. The song has taken on a new poignancy now that he’s gone. 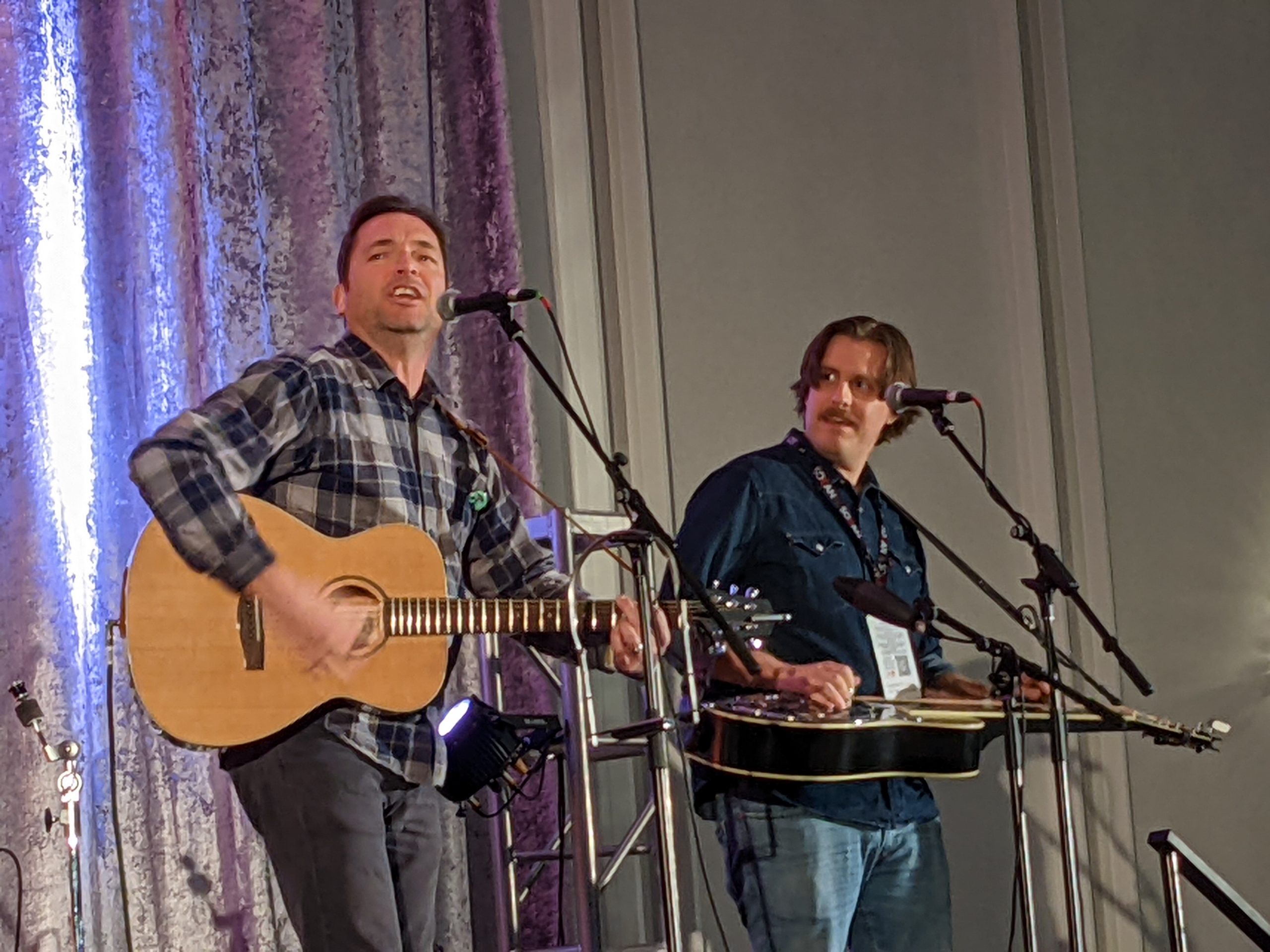 They follow up their tribute to Bill with “Float Away,” a haunting song about a woman who drowns the newborn she’s unable to care for.
By the time they launch into “The Ghost of John McGowan,” you can hear a pin drop in the hall.

2:50 p.m.: Here’s something I don’t think we’ve seen before at FMO: the executive director of the organization performing on the showcase stage. Rosalyn Dennett is playing fiddle and singing harmony with Ken Whiteley. And sounding great, I might add. It’s nice to have a true folkie in charge, and it’s a nice bonus that said folkie came with some great ideas for the organization and this conference.

3:12 p.m.: This afternoon’s showcases have a bit of an “familiar faces” theme to them. So far everyone, I’ve seen this afternoon is someone I’ve seen before. Hannah Shira Naiman, Shawna Caspi, the aforementioned Tragedy Ann and Ken Whiteley, and now Eve Goldberg is on stage, somewhat unexpectedly, by the sounds of things. She’s invited Ken Whiteley to join her and has the audience singing along to “Keep On the Sunny Side.” Now she’s invited Treassa Levasseur, Shawna Caspi, Rachel Barreca, and Brenna MacCrimmon on stage for the closer, “Many Sparks Make a Fire.” What was that we were saying earlier about folk being community? 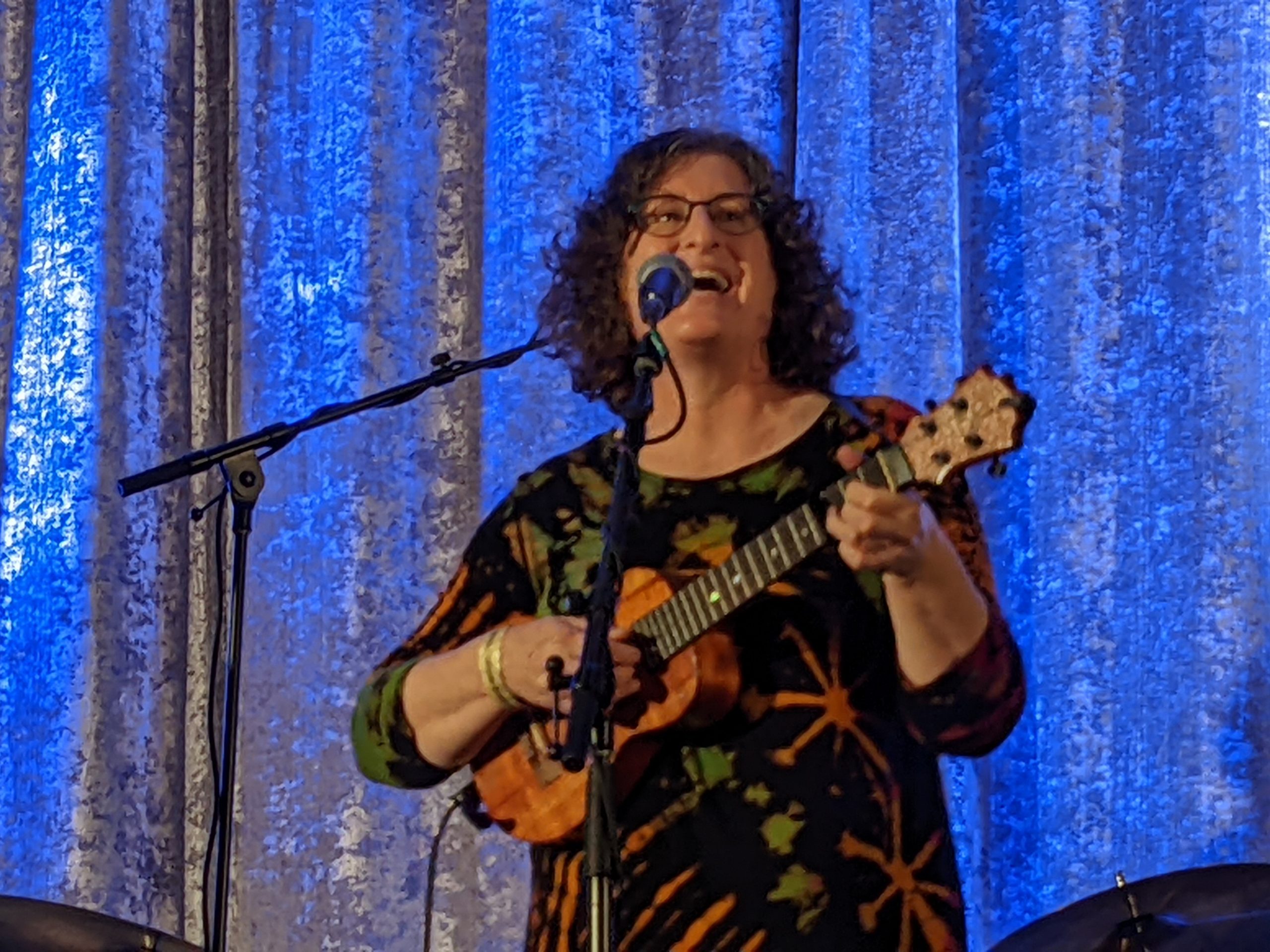 3:34 p.m.: OK, here’s an artist I haven’t seen live before: Chris Ronald, and wow! I totally wasn’t expecting this. I remember liking his recorded work well enough, but I wasn’t prepared for the emotion that comes through when he sings the songs live. He’s the sort of intimate solo singer-songwriter who isn’t terribly well-served by this cavernous hall, but my solution to this is to wander up closer rather than leave, so that’s a good sign. As a bonus, Chris is English, so everything he says on stage automatically sounds three times as polite as if would if said with a Canadian accent.

3:43 p.m.:  Jordan Percival of True North introduces Craig Cardiff by saying he’s been streamed 100 million times.  For those trying to calculate in your head how many boxes of Kraft dinner you could buy with the royalties from that, the answer is, actually a lot. By my calculation, that’s about $400,000.

4:11 p.m.: I’m watching Christina Hutt’s showcase because Richard Flohil told me to. She opens with a song she says was inspired by a George Jones tribute show, and she’s definitely captured his essence, from the warbly voice to the lost-my-baby lyrics. She even calls for pedal steel from, an imaginary musician on stage with her. and I dutifully imagine a pedal steel solo in the song. 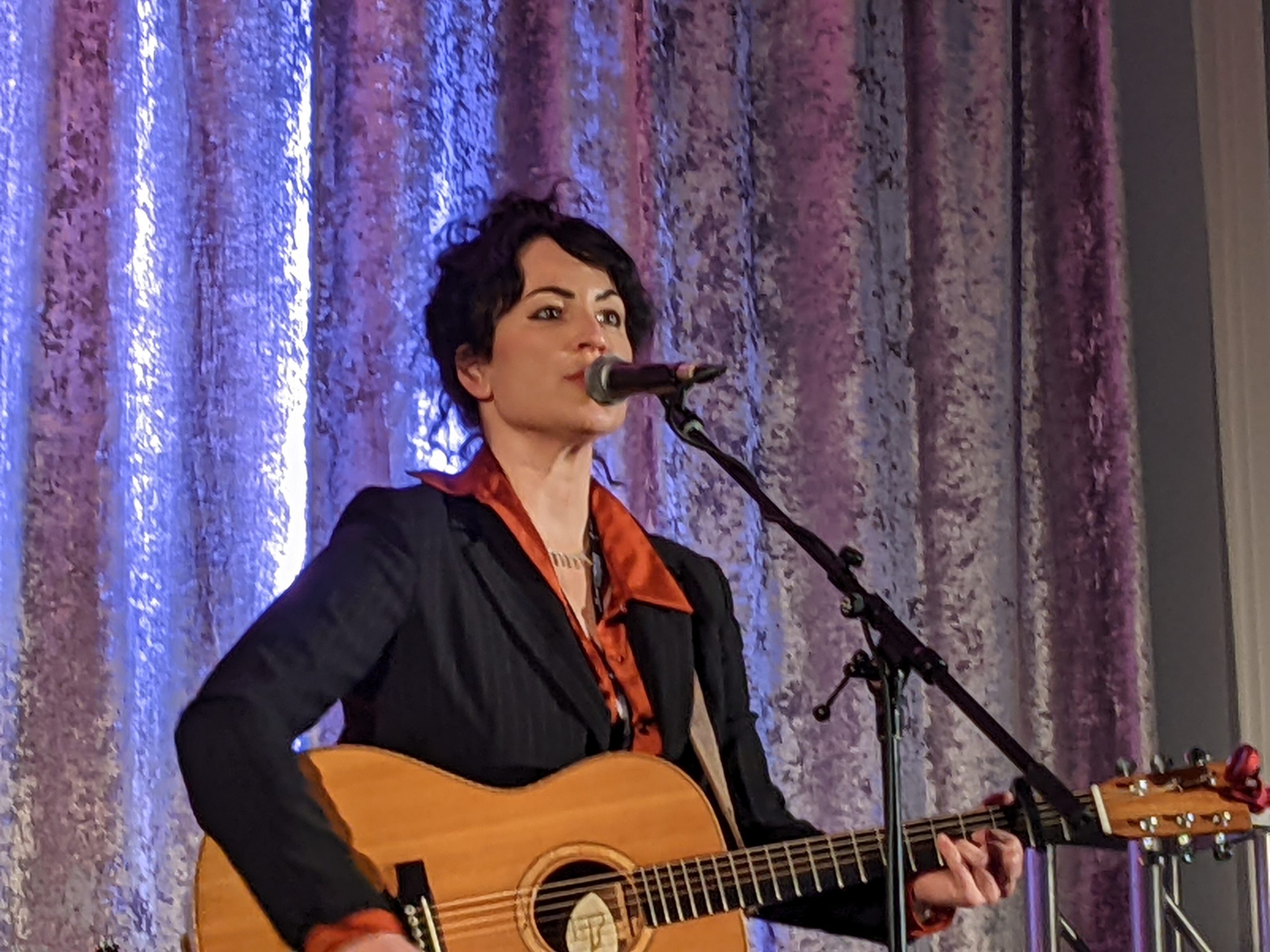