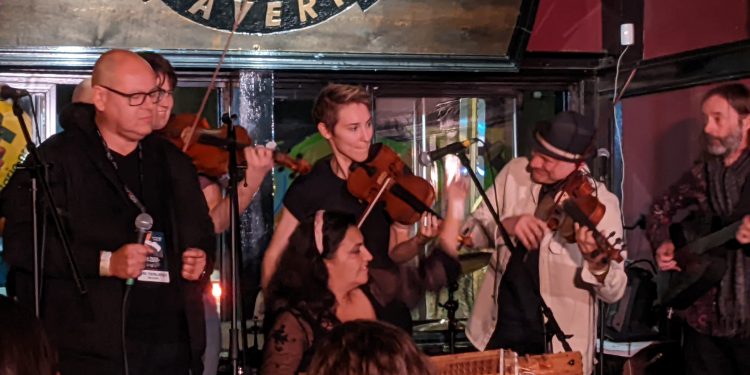 Sultans of String performs at the Richmond Tavern with guests, including Marc Merilainen and Saskia Tompkins.

7:08 p.m.: I just spent the last half hour watching Julian Taylor’s set, which, as you might expect from a guy that was just nominated for a Juno and won a CFMA, was outstanding. The room was packed as Julian kicked things off with the title track from the album that scored him those honours, The Ridge. Next up was one of his new singles, “Seeds,” a response to the discovery of children’s graves at the former Kamloops Indian Residential School. “They tried to bury us. They didn’t know we were seeds'” he sings.

Julian gets the audience singing along on “Ballad of a Young Troubadour,” before setting up a new song that’s an absolute tour de force. It’s a song called “Murder 13” about the murder of Julian’s best friend in 2005, and it leaves me so moved I want to escape to my hotel room and sob. He finishes his set with another new song, this one about narrowly escaping a serious car accident last year, and is rewarded with the first standing ovation I’ve witnessed this conference. 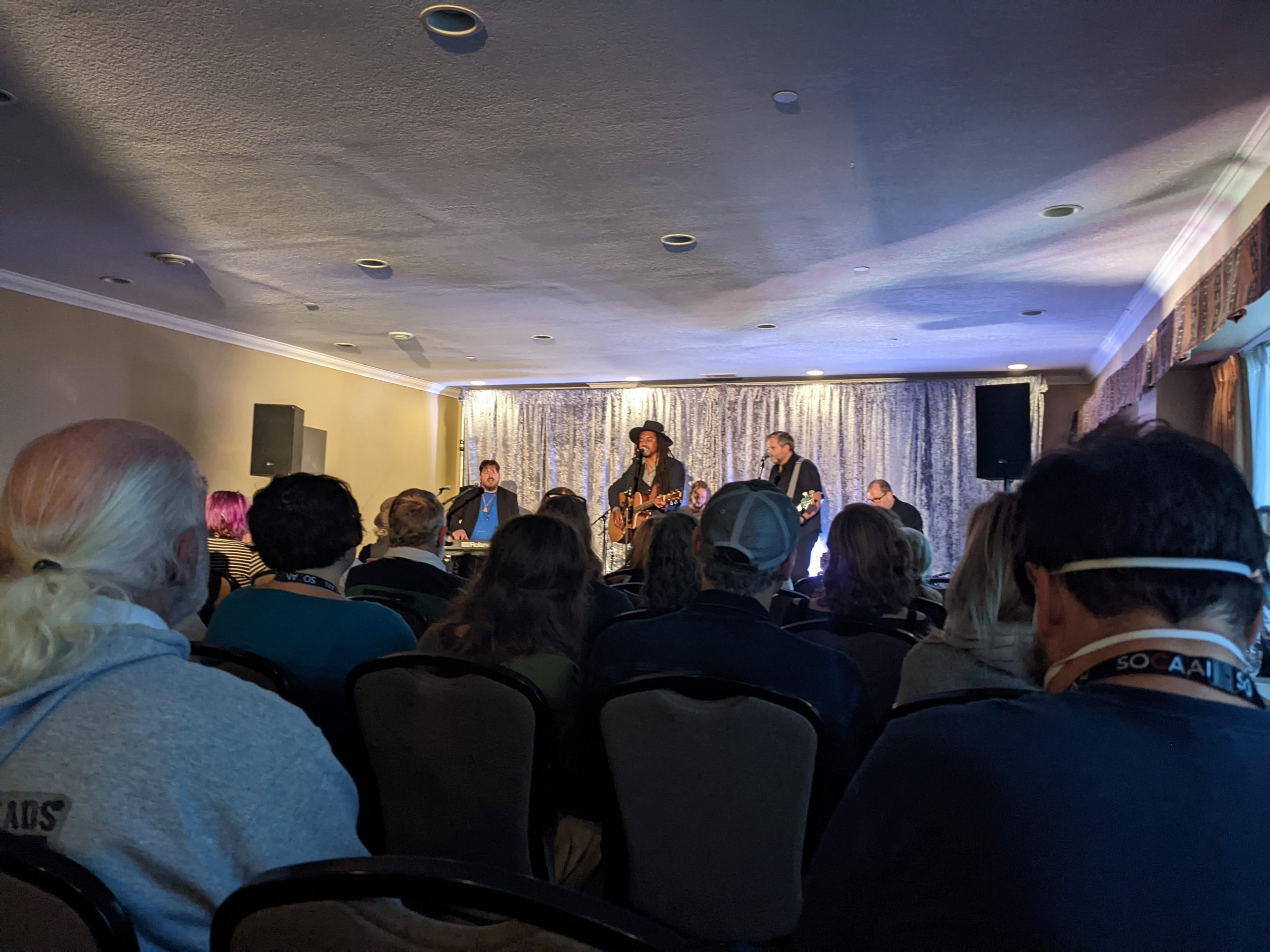 7:55 p.m.: Aysanabee just wrapped up his set, also to a packed room and also to a standing ovation. Are we on a roll tonight for great music or what? Aysanabee’s soulful voice is the centrepiece of his moving songs. But holy is he also an impressive guitarist. And his storytelling on stage is really engaging. “Someone told me to make sure I pace myself,” he said of his first FMO. “I did not.” 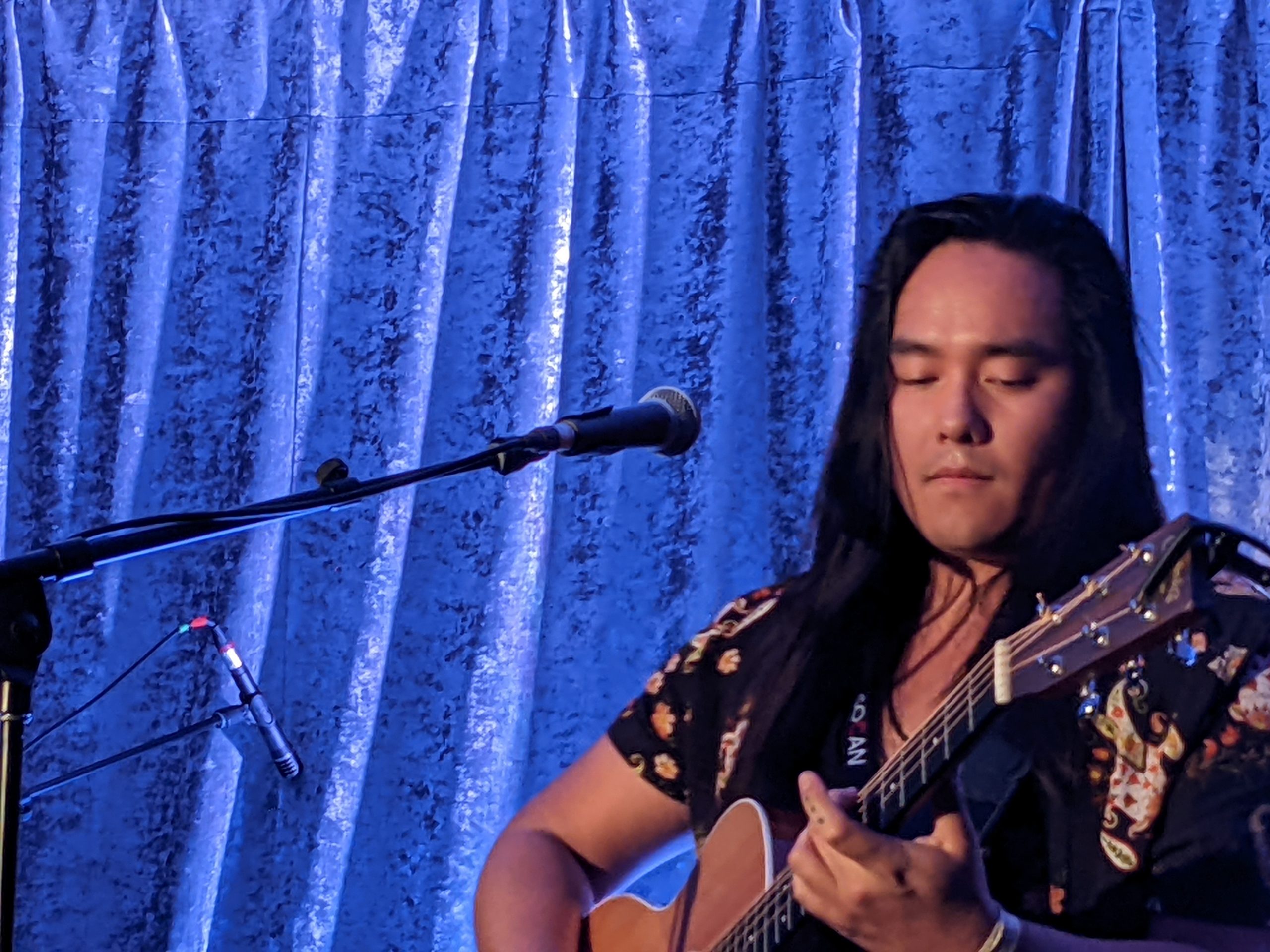 8:25 p.m.: Onna Lou is an artist I’d been looking forward to seeing here, and I’m not disappointed. Her Spanish-language, Latin-tinged folk numbers, backed by nothing but her guitar, are light, airy and uplifting. And that voice! What a beautiful pure voice she has. Between songs, she is wise and philosophical, talking at one point about how the real keys to happiness are not found in pursuing a career, but simply in being in the moment with loved ones – a sentiment we can all appreciate as the temptation to “hustle” resumes. 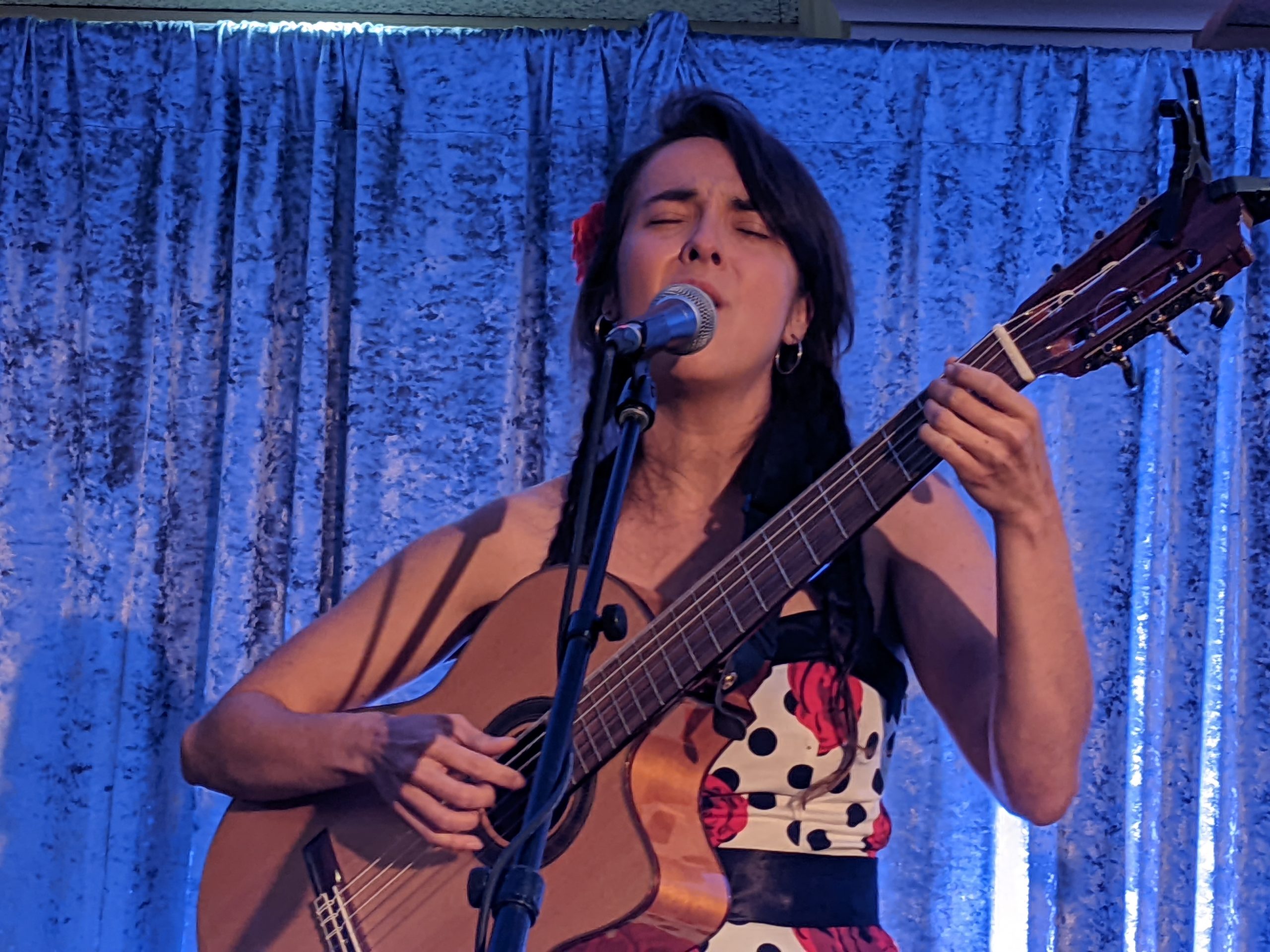 9:30 p.m.: I’d been unsure which of the final official showcases to see tonight, but I’ve settled on Les Rats d’Swomp despite some reservations. After all, when Quebec has already produced La Bottine Souriante, Le Vent du Nord and a long list of other insanely talented trad outfits, what could one more possibly add to the mix? My question is answered when I walk into the room and see four guys on stage dressed in red flannel lumberjack shirts with a drummer in a hat of similar plaid. The best way I can describe their sound is “Quebec trad meets the Pogues,” which is to say, a shit ton of fun. 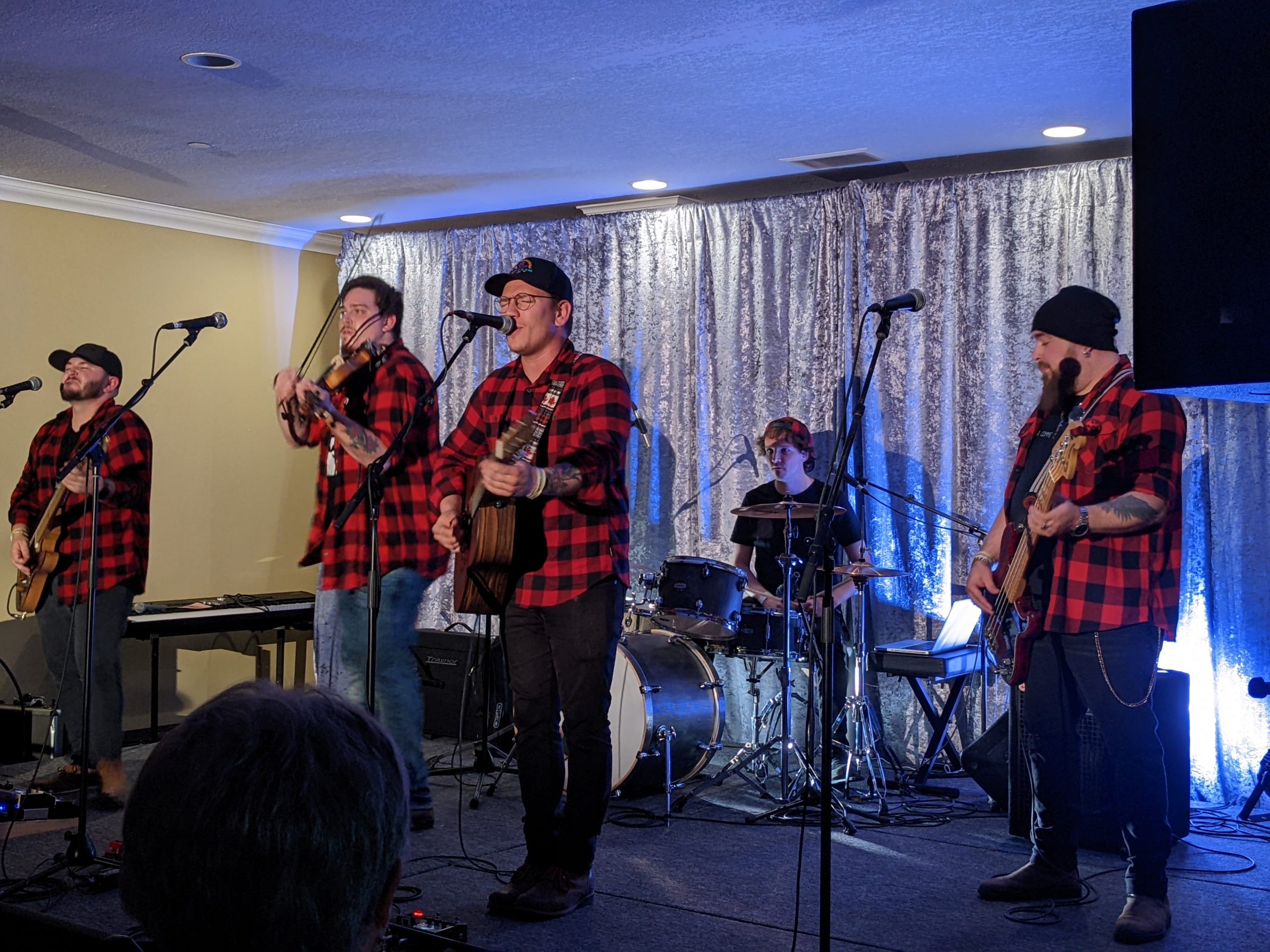 11:38 p.m.: Local London act Willow Switch is a collaboration between a Romanian saw player and an Anishinabe banjo player, but that doesn’t begin to describe what’s happening on stage here because the vocals are really what drives this duo. Robin Henry has a super powerful raw holler and makes me think of those bands of old punk rockers like Dyad that started playing old-time because they were drawn to the raw authenticity. But he also switches at times to traditional Anishinaabe singing, and when Andra Zlatescu, herself possessed of an equally powerful voice, joins in, the sound takes on more of an Eastern European, could-peel-wallpaper-of-walls feel.  The music is spiritual and concerned with processing dark feelings, but it’s clearly working. Because when Robin stops singing and starts talking, he comes off like a super friendly, nice, normal dude.

And Andra?
“I have something inappropriate to say,” she tells the audience. “There are so many hot people at this fucking conference.”

Flattery will get you everywhere, girl.

12:28 p.m.: “I’m going to the river,” sings Ben Wright of the Barrel Boys. “I’m going fishing!” the audience sings back.  We’re at the Richmond Tavern, and I’ve moved up close to the stage to hear the guys better because the sound wasn’t so great in the back of the room. From this vantage point next to the stage, their gorgeous five-part harmonies are coming through loud and clear. They follow “Going Fishing” with the tender “Upgraded Love” and “Mainline to your Heart” – Kyle Kirkpatrick earns applause for his dobro work on that one – and then one more track from the record to close. The packed house applauds enthusiastically, and with that, I’m heading back to the hotel. I can’t believe I used to watch shows ’til 3 a.m. at these things just two or three years ago. Cecile Doo-Kingue and I were just talking earlier about what the pandemic has done to our collective energy levels. Or maybe it’s just age and I don’t want to admit it. 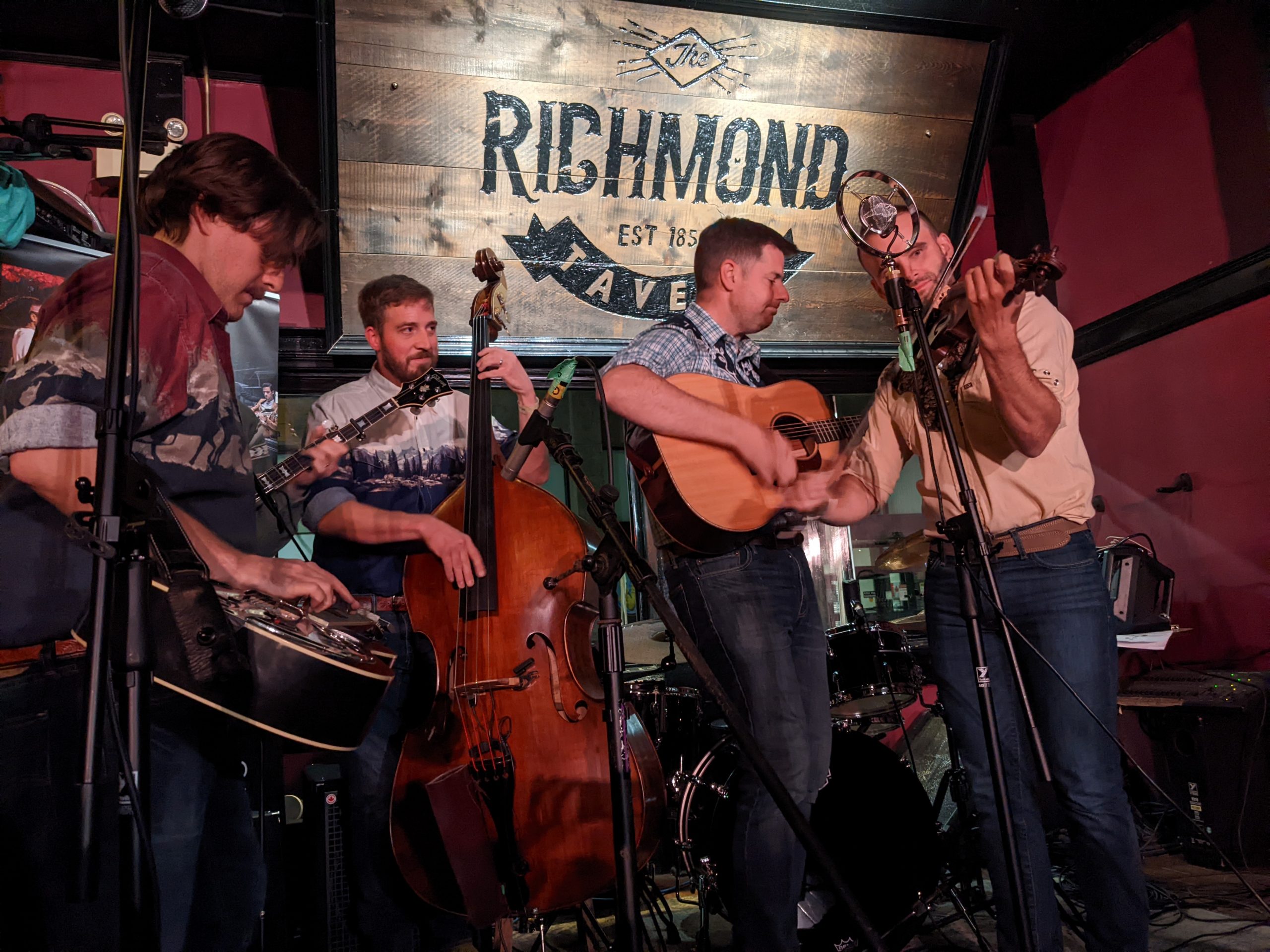