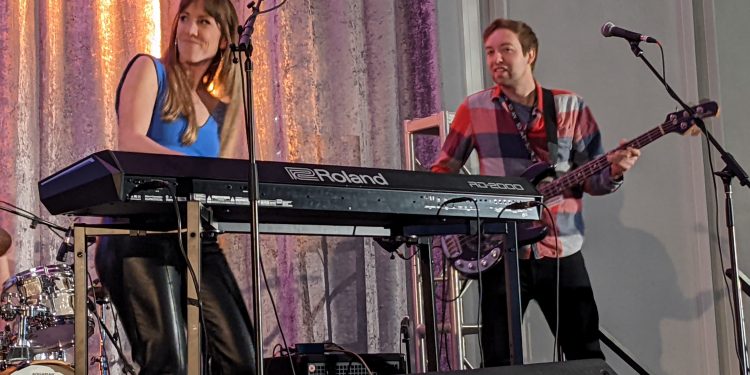 11:30 a.m.: I arrived at the Grand Ballroom for the start of the day’s spotlight showcases because I wanted to catch PEI’s Dylan Menzie, who I last saw live during PEI Music Week in 2014, when he was promoting his fabulous roots-rock debut, Heather Avenue (Full disclosure: I may be partial to people who include “Heather” in their album titles). He’s since incorporated a number of influences and elements into his work, notably electronica, but this morning he’s in solo singer-songwriter mode and sounding great.

After Dylan, we hear from Sarah Hamilton, who appears to be a worthy heir to the tradition of inexplicably excellent southern-style roots music coming out of the Yukon. In fact, Sarah is quite literally an heir to that tradition; she is the daughter of Bob Hamilton, the musician and record producer who has a lot to do with that signature sound.

Next it’s time for the first standout act of the morning: Lunar Bloom. Canada has a fine tradition of excellent female vocal harmony trios like the Wailin’ Jenny’s, the Good Lovelies, the Be Good Tanyas and Chic Gamine. But Lunar Bloom is kicking it up a notch with sophisticated and unexpected vocal arrangements that are, shall we say, more savoury and tart than sweet.

12:17 p.m.: Holy shit. Taylor Abrahamse is the first surprise of the morning. “Hellooooo” he sings powerfully from the stage, immediately stopping in their tracks every person who was about to wander out of the ballroom and figure out what to do next. From there, we are off on an astonishing showcase of vocal ability and performance chops that are so impressive I almost forget to mention that he is also a mighty impressive guitarist. Taylor is both a singer-songwriter and a voice actor in Toronto, and it’s abundantly clear that he’s spent a lifetime cultivating a voice that can do literally anything. In the middle of his second song, I start thinking, “Man, this guy is sounding like Michael Jackson,” and I swear that not 30′ seconds later he inserts a chorus of “The Way You Make Me Feel” into the middle of the song he’s singing. By the time he plays his third and final song, he’s got the audience engaging in the most enthusiastic sing-along I’ve seen so far here. The music, by the way, is a mixture of acoustic roots and pop styles, not that it matters. This is a classic case of a guy who could captivate you singing the phone book. (Do those still exist?) 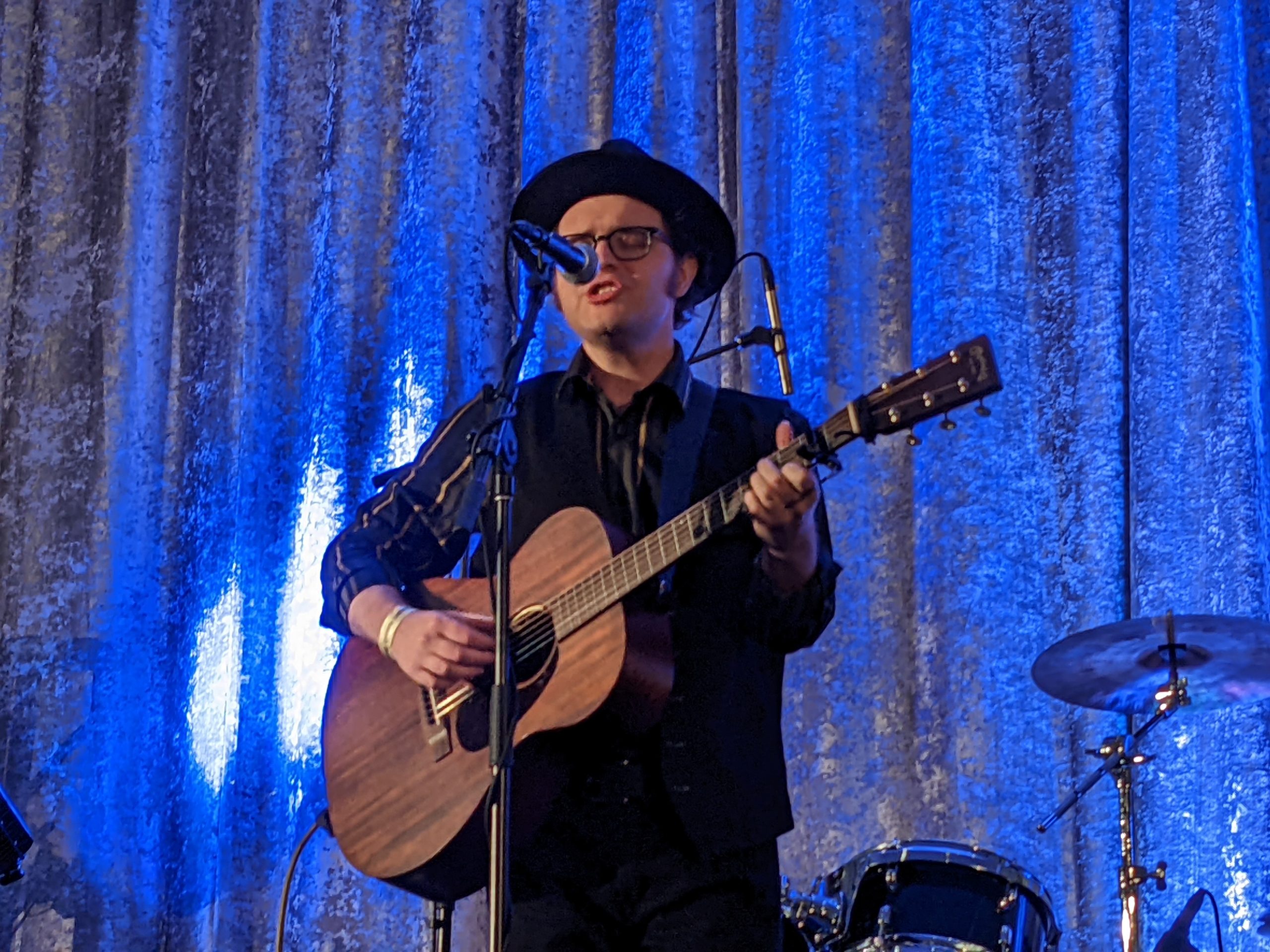 12:49 p.m.: Campbell Woods is on stage sporting appreciably more facial hair than the last time I saw him five years ago. I consider leaving to check out the silent auction since I’ve seen him a bunch before, but then he starts into his first song, and I can’t stop listening so I guess I’m not going anywhere.  When he’s done playing it, he tells the audience how great it is to be back here after two years of working construction to pay the bills during the pandemic — and how, working those jobs, you just don’t get the kind of introspective conversations about suppressing anger that Sarah Hiltz just shared with the audience during her set right before his. I wasn’t banking on Campbell being so much better this time than he has been when I’ve seen him before.  He was already great.  How much better could he get?  But it turns out he grew even more songwriting skill along with the beard. 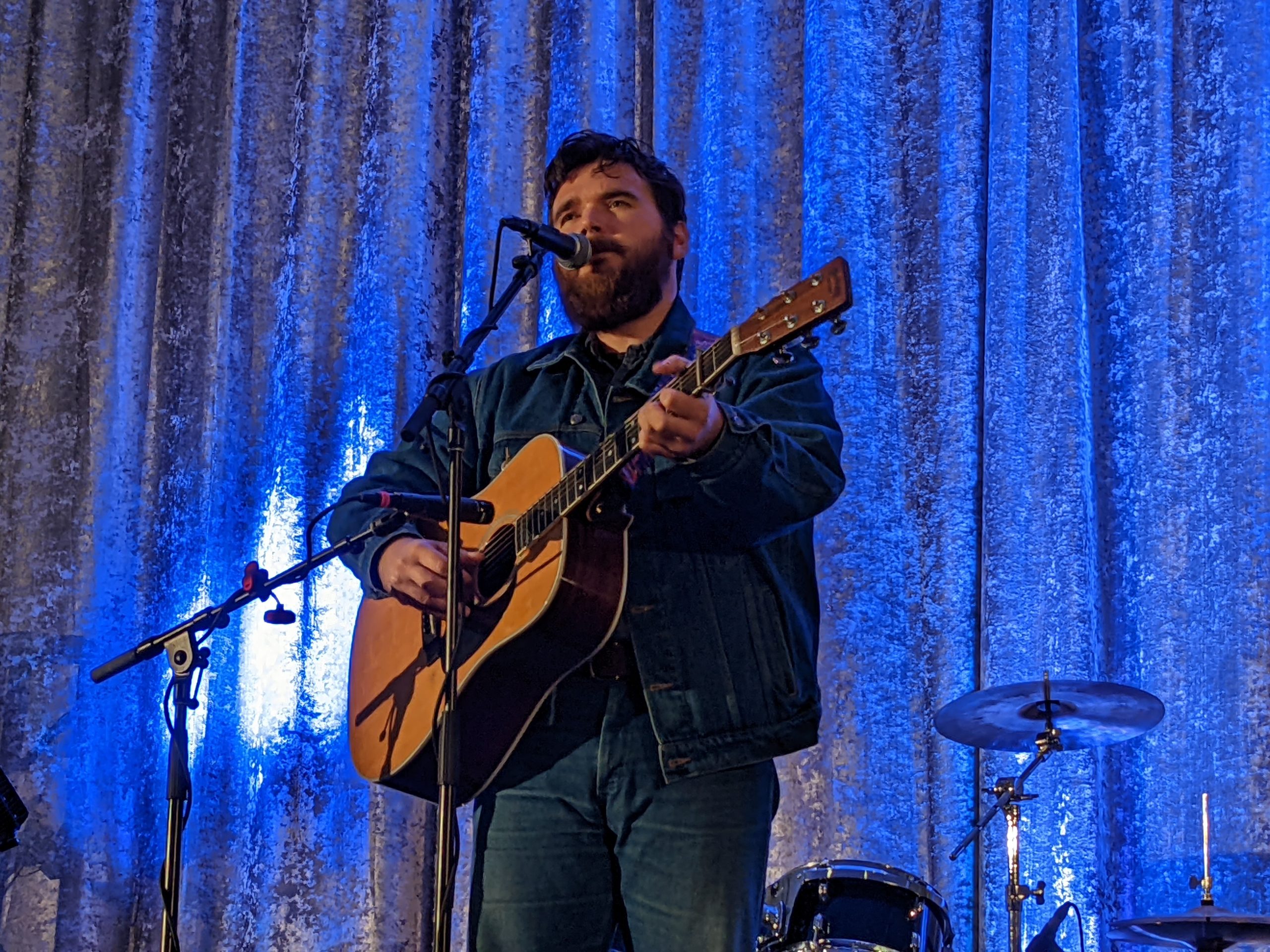 2:00 p.m.:  I take a break from the showcases to attend the panel discussion on responding to the climate crisis as artists and as an industry. It’s a precursor to a climate summit taking place in Toronto on Oct. 21 brought to us by the group Music Declares Emergency.  The panel discussion surveys a number of issues but time prevents panelists from diving into any in depth. There is talk of the need for artists not to guilt themselves about catching flights to gigs given the structural barriers that exist to doing the right thing. Panelists repeatedly emphasize that our political and industry leadership needs to create the conditions for change to happen. Kim Fry says, for example, that around 97 per cent of emissions related to concerts actually come from audience members driving to the venue, not from the artist’s travel. Yet many venues don’t have bike racks. Singer-songwriter and activist Sam Baardman also prompts a discussion about the importance of creating art that not only protests for action on climate change but articulates people’s emotions around the climate crisis. I ask the panelists if there are specific “asks” of organizations like FMO that audience members can advocate for – like, for instance, an EV share program for touring artists. Kim says the EV share program has been discussed, but there aren’t specific asks yet.

3:10 p.m.: Back in the ballroom, Jenie Thai is kicking off the Toronto Blues Society showcase, and once again, she’s kicking ass. I could pretty much just listen to a full set of her singing “Who’s That Girl?” Over and over again and be happy. 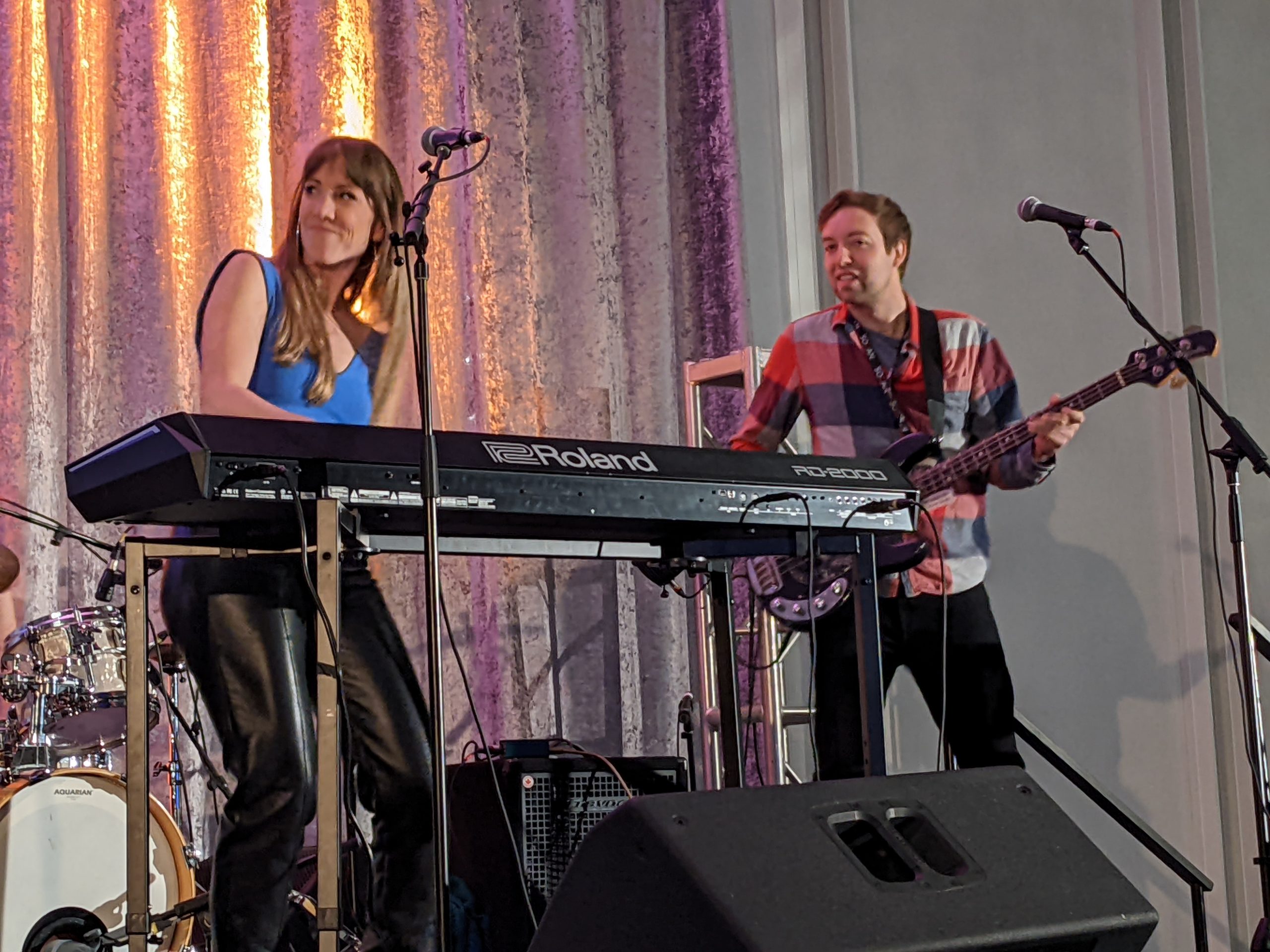 3:33: Sugar Brown is the blues name of Ken Kawashima, a professor of East Asian history at the University of Toronto and a scholar of music who also happens to be a pretty skilled and entertaining blues performer in his own right. He grew up in Ohio and started playing the blues in Chicago, mentored by a guy named Taildragger, who gave him his stage name. Lately, he’s been inspired by Trinidadian music, and the standout song in his set is the one that incorporates those influences. Possibly the best part of Ken’s set though is his deadpan humour. He sets up the last song by explaining that he normally travels with a band, but they couldn’t come to the conference because of the economics of the situation. He then explains that, as a professor, he lectures on capitalism, but he won’t lecture us. Instead, he wrote a song about it. Not only am I left wanting to see Ken perform again. I’m also thinking of enrolling in Asian Studies at U of T. 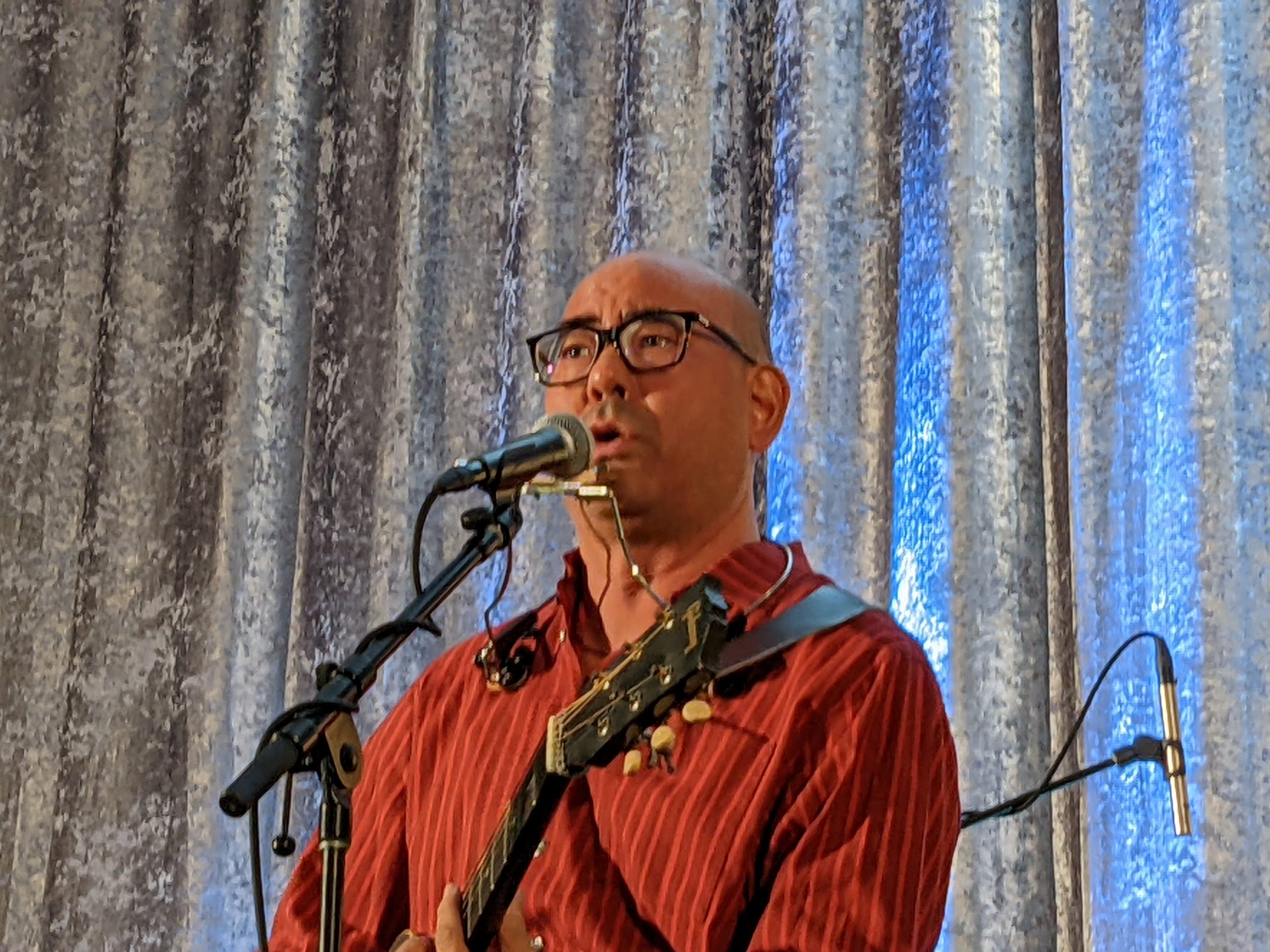 3:48 p.m.: Now seems like as good a time as any to pause for a moment and comment on the very clever showcase set-up here at FMO this year. The daytime showcases are happening in a large ballroom with a stage at each end. While one act plays at one end, the next act is setting up on the other, so there is no lag time between sets. It’s continuous music for five hours. Why didn’t anyone think of this sooner?

4:00 p.m.: I was about to leave and go check out the reception in the Merilainen Music suite but Sandra Bouza just launched into a walloping blues cover of Gordon Lightfoot’s “Sundown,” so I guess I’m staying here for a few more minutes.