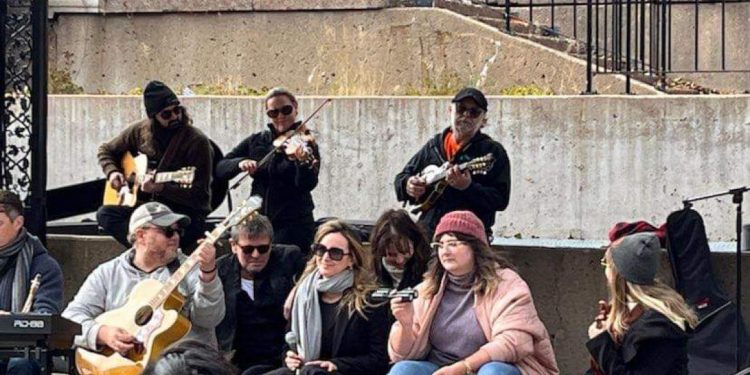 The jam on Victoria Row. Photo by Rob Oakie.

We just told you how Celtic Colours is going ahead in Sydney on Friday, despite the uprooted trees and downed power lines. Wondering how the rest of Atlantic Canada is doing?  Here are a few reports from members of the folk/roots community.

“It will be a long time before things get back to normal. There are trees down everywhere and still about 40 per cent of households that don’t have power yet. Everything has been pretty well shut down. The Confederation Centre has had power all week and been a warming centre for those that need it.

But I just came from a free jam on Victoria Row with Tara MacLean, Alicia Toner, Lennie Gallant, Andrew Waite and a bunch of others. It was uplifting! …

There are still… musicians that don’t have power, even in Charlottetown. Catherine MacLellan left last Sunday for an Australian tour but had to leave from Moncton. Charlottetown Airport did not open until Monday.

Fortunately, Showcase PEI ended last week and everyone managed to get out just before the storm hit.” – Rob Oakie, executive director of Music PEI, Charlottetown, PEI

“Fiona by-passed eastern Newfoundland completely and was felt mostly on the west coast in rural fishing villages, the one exception being Port Aux Basques, which is a larger town that has the ferry crossing to Cape Breton. … Anyway, we were very fortunate here in St. John’s and in the rest of NL in general. … We did get rain and wind but nothing abnormal. There was a strange haziness in the air, which was moisture drawn up into the atmosphere by the hurricane apparently.” – musician Jean Hewson, St. John’s NL

“We were almost untouched in Margaree. It was wild. Not sure how we were spared but [we] didn’t even lose power. I’m not aware of any musicians or venues with lasting impacts, though Sydney was hit a heck of a lot harder, and musicians in that area may have had a different experience than the ones on this side.” – musician Chrissy Crowley (Coig), Margaree, NS
“We had rain and a little wind. It didn’t hurt us at all … It was just rain. It was nothing. It was a storm. I’ve been through much much worse.” – Bob Mersereau, music journalist, Fredericton, NB
If you are enjoying this content, please take a second to support Roots Music Canada on Patreon!