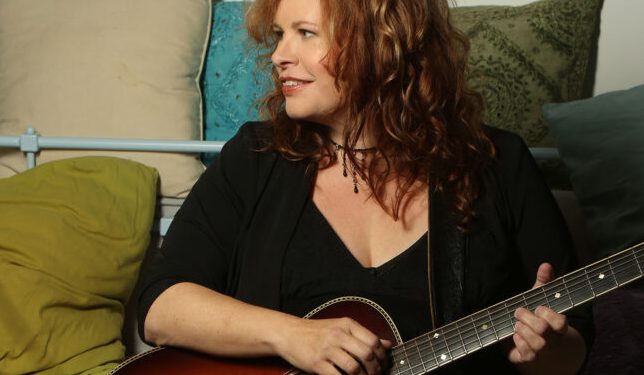 For the past couple of years, singer-songwriter Suzie Vinnick has presented a weekly online concert through the streaming service Street Jelly. Every Wednesday night, Suzie sings her original songs and takes requests from her regular viewers. During this time, she’s also featured the songs from each of her albums, starting with the first song and running to the last. Doing this was enlightening for Suzie as she reacquainted herself with songs she may not have performed in a while.

“When I was listening to those albums, I kind of went, ‘Wow, I like how they make me feel.'”

The end result of this exercise is Suzie’s newest album, Fall Back Home, a mix of the styles from two of her albums, 33 Stars and Me ‘N’ Mabel.

“33 Stars came out of a really challenging time I had,” she explained. “Both of my folks passed away, my grandmother died, a friend committed suicide and a marriage ended. There was a lot of grief stuff going on, but the album didn’t feel morose and totally sad. The COVID pandemic was tricky with a lot of grief for different reasons, with people being sick and locked down, and as a musician not being able to work. So I thought it would be nice to do a record that can make you feel grounded a little.”

The reception Suzie got from 2011’s Me ‘N” Mabel was also positive.

“So I thought it would be neat to combine both so I would appease the bluesier fans of Me ‘N’ Mabel and the fans of the rootsy 33 Stars.”

The common denominator of both albums, besides Suzie herself, was the role of Danny Greenspoon as producer.

“Danny’s a great person and musical and nurturing. So I thought it’d be really great to work with him again.”

The album’s title comes from a co-write with Matt Andersen called “Talk To Me.”

“In 2018 Matt reached out about writing together for a new record he was putting together,” she said.

The song didn’t make it on Matt’s album but Suzie was able to use it when applying for recording grants, and it appears as a duet with Matt on Fall Back Home.

“We do it in different keys so when he sang lead he said, ‘This is pretty low for me’ but hearing it back, I think you’re just being enveloped in a big Matt Andersen vocal hug, it’s so warm and velvety.”

Suzie’s weekly performances on Street Jelly were an novel concept for her.

“It was interesting and cathartic in some ways and exciting and scary,” she said laughing. “Early on, I would say if there’s something you want to hear, let me know and I’ll do my best to get it learned up. So I would choose songs I had heard before on the radio, and there were some songs that were spanking brand new to me that took a little while. That was very cool to get challenged in that way and learn some new stuff.”

Suzie also reached back to her days as a teenager in Saskatoon when she was in a duo with a friend playing cover songs in smoky bars.

“I have to say some people were very prolific during the pandemic as far as creating new material,” she said. “I just wasn’t feeling it, so this was my way of learning and finding my voice.”

As part of this process Suzie re-interpreted Wade Hemsworth’s classic “The Log-Driver’s Waltz.”

“I turned it into more like a Caribbean kind of flair,” she said. “I straightened it out. It’s groovy. It’s just different. I had fun with it, and it’s creative in another way.”

A request for Chilliwack

One of the requests Suzie received for her weekly online show has made it onto Fall Back Home.

“One of my fans from Saskatchewan requested ‘Raino’ by Chilliwack,” she said. “I grew up listening to Chilliwack but I wasn’t familiar with it. That was one song that took me a little while to get my head around. It moves a little bit differently musically than I’m used to.”

The initial thought after Paul Pigat laid down some lead guitar was to ask Bill Henderson from Chilliwack to sing harmony on it. Bill didn’t think it was a “harmony” song so they settled on him supplying some additional lead guitar.

“Bill is at the beginning and the end with Paul’s solo in the middle. I loved both of their parts, so we tried to figure out the best way to represent them both.”

For more on Suzie Vinnick and Fall Back Home, go to suzievinnick.com.