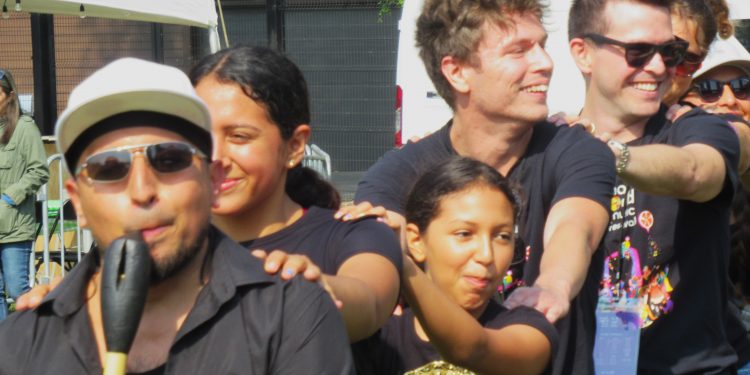 In an open field near Toronto’s Fort York, where American troops were defeated by an army of Canadian, British and First Nations soldiers over two centuries ago (they retreated secretly and booby-trapped the munitions area to explode), peace was restored once more this past weekend by a diplomatic battalion of singers, dancers, musicians and volunteers.

The Small World Music Festival, typically the last big festival of the summer season, was powered by the harmony and rhythm emanating
from two stages running consecutive shows from local and international representatives of the gumbo of global communities that call Toronto home.

Over the past 25 years of its existence, curator Alan Davis has guided the event through a wide range of T.O. venues.

“We’ve done Harbourfront, Ontario Place, a pub crawl format that included Revival and the Lula Lounge and a lot of places that don’t even exist anymore,” he said. 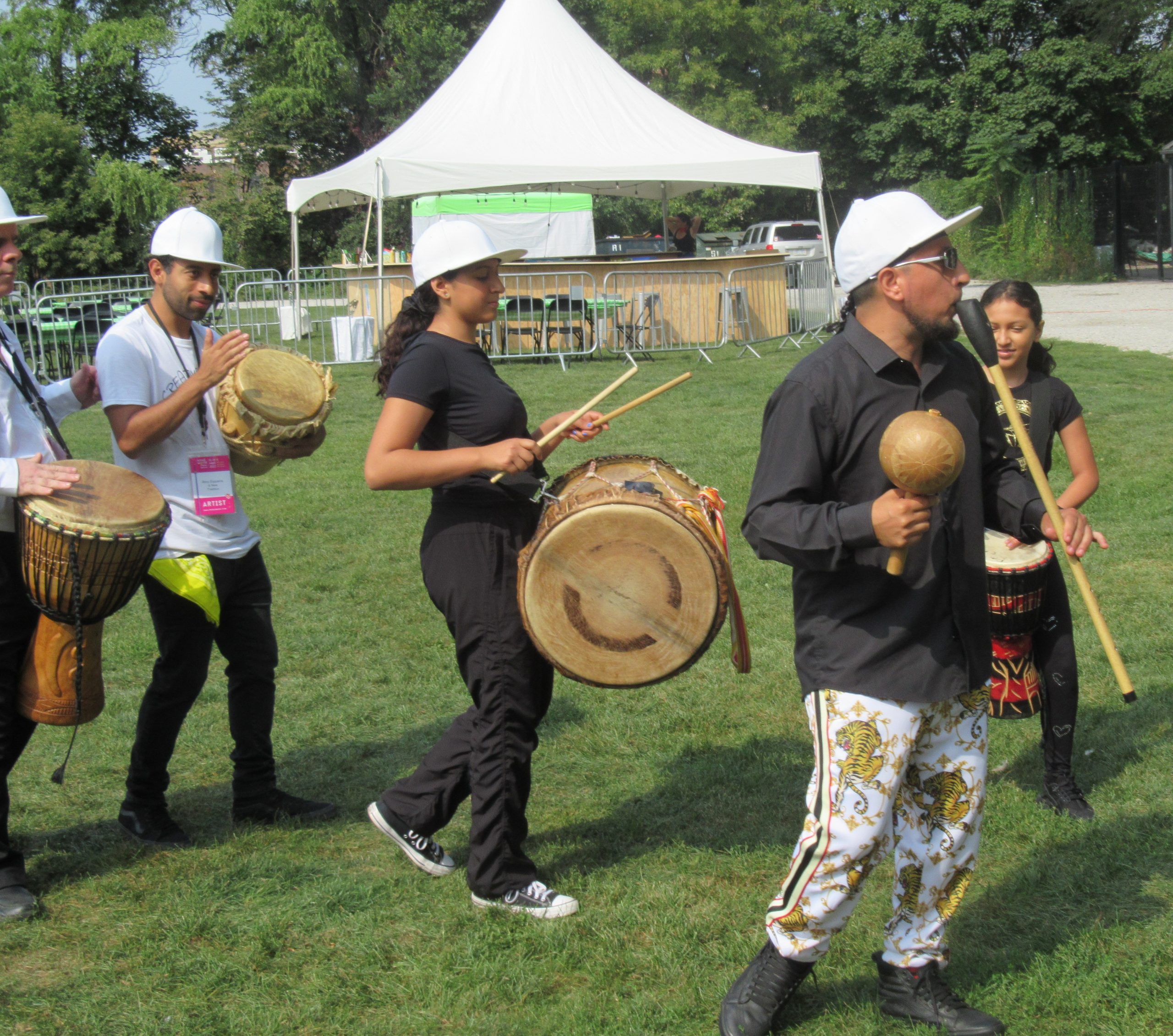 “Well, part of the plan now is to establish some consistency,“ he explained. “Fort York Garrison Common gives us more elbow room and visibility, and working with the city has been a great partnership. There are two stages so we can offer a pretty much non-stop musical experience. And in addition to that we can take advantage of the outdoor space by having food and craft vendors, a kid zone, ping pong tables, a sauna, a beer garden, stilt-walkers, marching bands and be pet-friendly besides. So it’s able to become a pretty involving immersive experience.”

Meanwhile, volunteers with handbills were patrolling the periphery of the field, building the crowd as the excitement became evident.

Following his performance, a newcomer to Toronto from Brazil, JER, flamed in with an incendiary dance-provoking hybrid of rock and Rio that pulled the growing audience of about a hundred closer to the stage and attracted more dog-walkers and condo dwellers from the nearby neighbourhood. 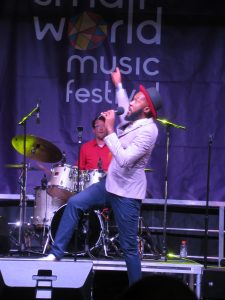 Switching back to the big stage, Haitian Montréaler Vox Sambou (right), a founding member of the mighty multilingual collective Nomadic Massive, brought the right mix of showmanship, elegance and outstanding musicianship to set the crowd in motion with his reggae, African and Zouk rhythms. 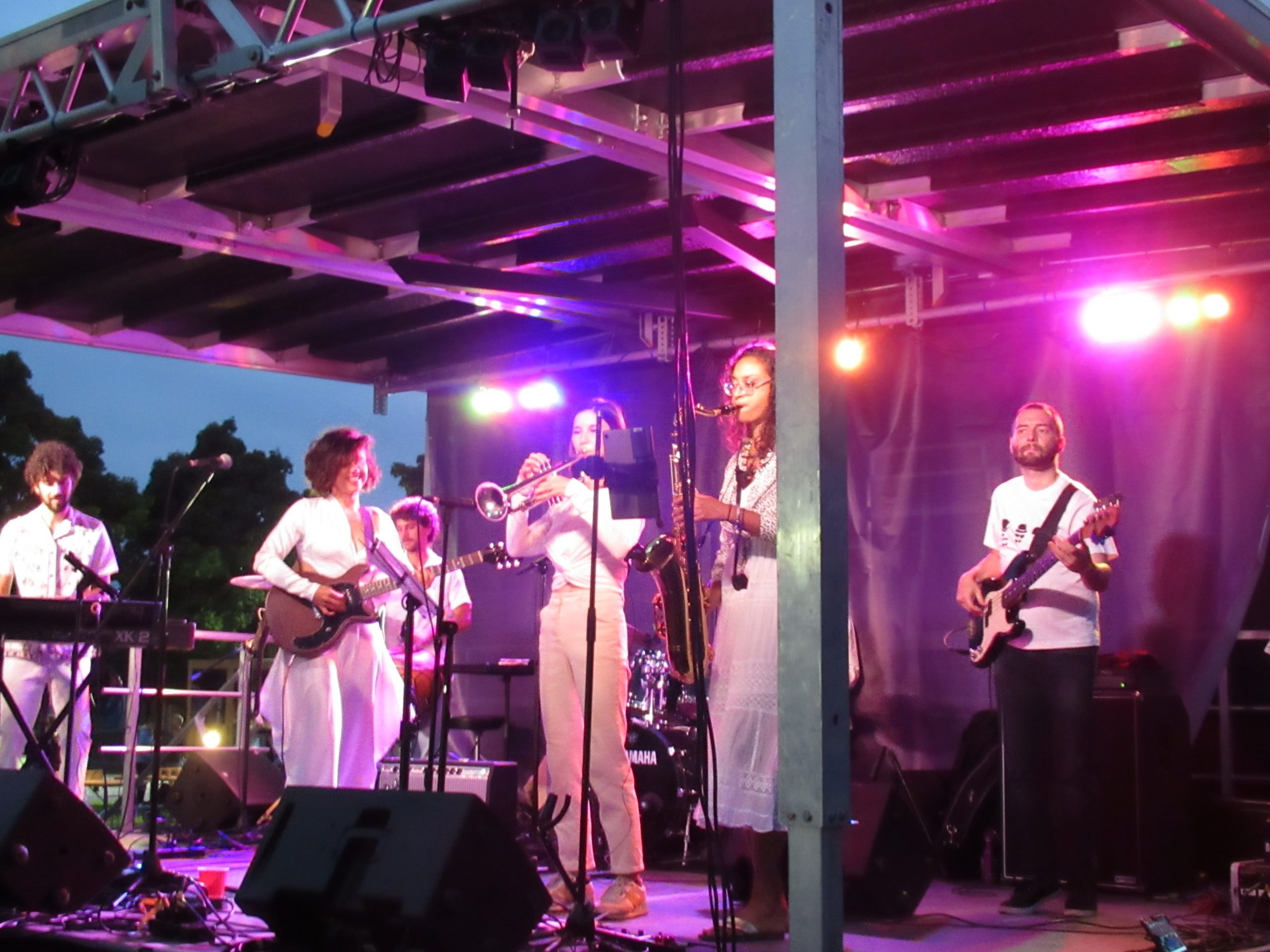 All that was needed then was some exploration of EDM crunch to escalate the evening into a real party, and that was exactly what Parisian electronic duo La Chica, originally out of Venezuela, had in mind with their highly charged Toronto debut.

“Back when we were young,” Alan Davis commented, “a singer-songwriter meant someone with a guitar; this woman is doing it with electronic instruments and beats and people are really responding to it.”

To close off the night, Moneka Arabic Jazz, the hit of Uma Nota’s 2021 intercultural Mixto Festival, sent thrilling percussion and ferocious soloing skyrocketing into the cool night air, ignited by the vocals and dynamics of sibling singers Ahmed and Tara Moneka. 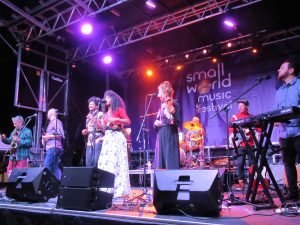 “They’re so charismatic and energized; Arabic jazz and big-ass funk.” Alan testified, “If there had been a roof, they would have blown it off.”

Saturday’s epic 10-hour program brought the inclusive nature of the festival into focus with a real wide swath of global sounds and communities with performers including Latin-American, Polish, Syrian expatriates, an Indigenous group, an Iranian group, and purveyors of African-American and Afro-Colombian traditions. 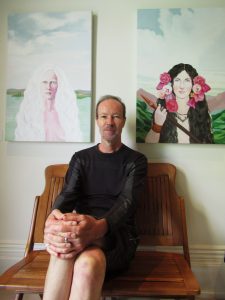 “What I’m finding more and more these days is there is a blurring of boundaries to the point where it’s harder to describe some of these acts because they’re incorporating so many different elements and making something new.” – Alan Davis.

Dance is the honey that inevitably results from the presence of so many musical pollinators being in one location.

“Overall I think that it’s the nature of the beast,” Alan remarked.” If you’re sitting in a room listening that’s one thing, but otherwise a festival outdoors does imply a certain level of energy.”

Beny Esguerra’s shamanistic control of an afternoon crowd had him leading a chain of festival goers around the park following the lilt of his playing on the kuisi, a native Colombian flute. 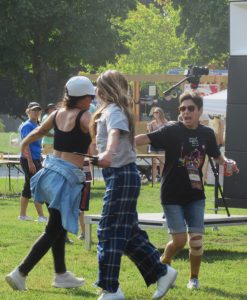 Polky’s rambunctious drumbeat set a trio of volunteers clutching their walkie-talkies into a spontaneous spin cycle. Even band member Robert Lee was dancing with his double bass. 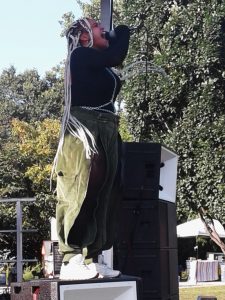 On Sunday, after a bothersome but not threatening cloudburst, Montreal soulster Hawa B. (right) whipped up a storm of her own with swirling braids and chiming vocals along with some monitor-riding grandstanding, and the devotional chanting of Sufi mystics Fareed Ayaz and Abu Muhammad, seated amongst their disciples, set arms and cash money to waving over the heads of hundreds of dancers enjoying their spiritual commonality in the wet grass and the light of the setting sun. 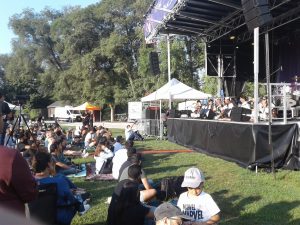 And the climax, on Sunday night, of a mini Powwow in front of the stage where Lydia Persaud, Joanna Majoko, Tara Kannangara, and Tamar Ilana had just finished collaborating with eight solo dancers as Fab Collab / Summer Thunder brought an even more ecstatic wave of movement alive as four Indigenous drummers and Fancy Shawl dancers made room for a Brazilian maracatu ensemble, culminating in a group ring dance full of smiles, hugs and conversations that allowed the small human qualities to create a bright human-world community out of the darkness once again.