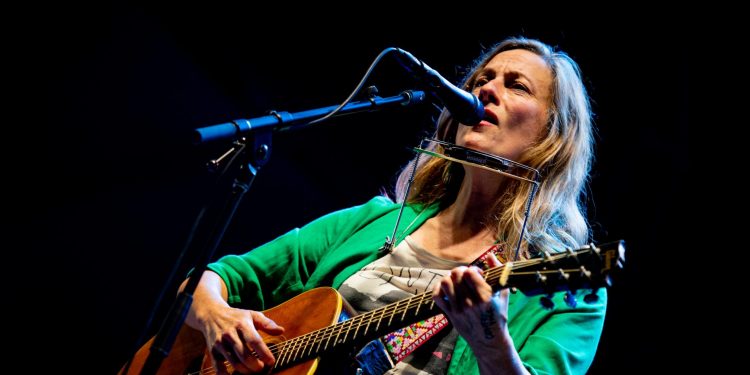 Sarah Harmer is on her first tour in 10 years, and the crowd was so happy to see her preforming again.

Kelly, is short-listed for the Polaris Prize this year!

Rounding out the group was long-time fellow guitarist Gord Tough, and on bass and back-up vocals was Zach Bines.

A mother and daughter who were standing in front of me sung along to every song and were excited when their favourites were played.

Sarah lives in the rural area of Kingston now, but is from Burlington.

She helps to care for her elderly parents and is an environmentalist.

She encouraged us to attend a climate protest next Friday, Sept. 23, 2022 at noon in Confederation Park in Ottawa.

Sarah grew up on a 100-acre farm on the Niagara Escarpment’s Mount Nemo plateau, and it has been under threat from a huge gravel mining operation (Nelson/LaFarge/Holcim) who want to blast 200 acres out of the centre of this UNESCO World Biosphere Reserve.

It was a grueling process that took eight years, but in 2012, they won, and the new mining permit was denied.

In 2020, the same company, applied again to destroy this part of the escarpment. The fight continues, and Sarah Harmer is a huge part of it.

We were so blessed to be able to hear her perform last night at the final night of CityFolk Ottawa, 2022.

The Juno award winning singer-songwriter also plays the drums, bass and guitar and released her sixth album in 2020, called, Are You
Gone.

It was her first album in 10 years.

We are so glad that she came back to the music scene.

Her tour takes her to Montreal and then out East.

You can keep up with her latest tour on her website www.sarahharmer.com.

Laurie Bowen is a freelance music journalist from the Ottawa area. She can be reached at laurielynnbowen@yahoo.ca.