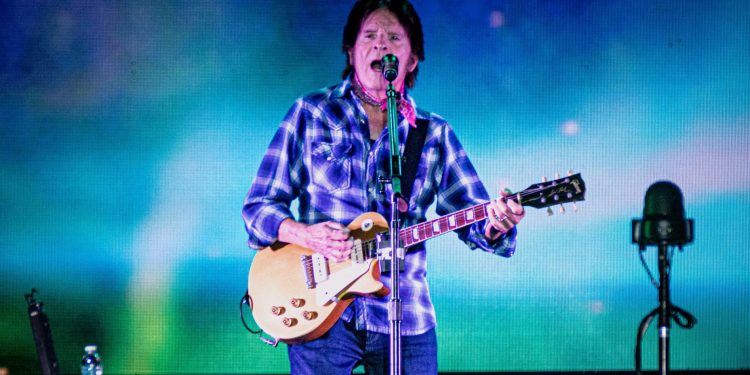 At the age of 77, John Fogerty hasn’t lost his touch or his voice.

Along with his two sons, Shane and Tyler, John played all of the hits for the enormous crowd that came to see him on the final night of the CityFolk Festival at Lansdown Park in Ottawa.

In the past, John has refused to play Creedance Clearwater Revival songs due to the ongoing civil suits that were brought against him from his record company (Fantasy Records), his bandmates (Stu Cook and Doug Clifford), and even his own brother, Tom Fogerty (who died in 1990 and was inducted into the Rock and Roll Hall of Fame in 1993).

Fantasy Records was sold, and John was given royalties dating back to the 1970s but not the ownership of his songs.

It was enough to encourage him to sing the songs.

It was the biggest crowd yet to assemble in Lansdowne Park, and while I started out at the front, only three rows from centre stage, it got too close for comfort, and I moved back out of the crowd.

Even from the back of the park, you could hear everyone singing along to each and every song.

I don’t know how he does it at age 77, but John sings, moves and plays like he is 20 again, and maybe that is what music does; it keeps us young.

There was, of course, an encore, and he ended the night with none other than “Proud Mary.”

John shared lots of stories throughout his hour-and-20 minute set about playing Woodstock and how his darling wife, Julie, found his precious guitar, a 1969 Rickenbacker 325 Sunburst, and purchased it for him for Christmas in 2016.

After the band broke up, he couldn’t bare to play it anymore and gave it away to a young fan.

Forty-four years and 40 thousand dollars later, he was reunited with it.

He played that guitar at Woodstock, and he played it last night too.

You can keep up with John and his latest tour at www.johnfogerty.com