Shovels and Rope open the final night of CityFolk 2022 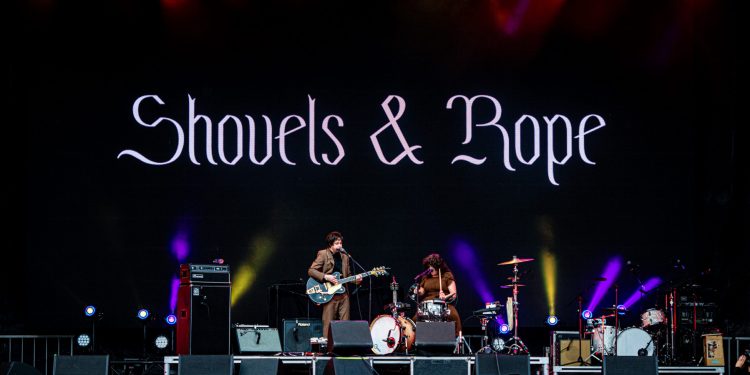 This dynamic duo is made up of Michael Trent and Cary Ann Hearst who hail from Charleston, SC. Not only are they accomplished musicians, but they are also husband and wife and usually have their two young children with them as they travel across North America.

They are heading off to Florida next week and then back to Texas and finishing off with a cruise in Florida in February. They are calling it Shovels and Rope On Tour Forever. They even played on David Letterman back in 2015.

Shovels and Rope are quite impressive, as they are both multitalented. Each of them can play the drums, guitar, keyboard, percussion, lead and back-up vocals, and Michael also plays the harmonica.

Their sound is unique and powerful, even if it is just two people up there.

It is obvious that they put their heart and soul into their music, singing about everything from murder (hence the name) to their darling children.

They call themselves folk, rock and country rock, and Cary Ann likes to co-ordinate their outfits, she in a brown jumpsuit and he in brown suit.

They started their set off with Cary Ann playing the drums before they switched.

She rocks on the drums, while singing lead and playing the tambourine.

Talk about multi-tasking! Cary Ann has it down pat.

They were so enjoyable to watch and listen to, and their set left us wanting more.

Their website is at www.shovelsandrope.com where you can keep up with their tour. It looks like this was their only Canadian date, and we are hoping that they will return to the capital city next year.

It was a beautiful night, and the crowd was large and welcoming for the first act of the night.

Laurie Bowen is a freelance music journalist who is from the Ottawa area. She can be reached at laurielynnbowen@yahoo.ca