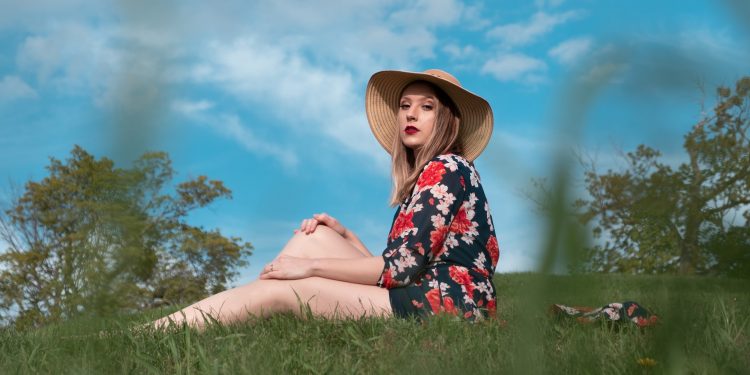 A yellow sundress conjures up imagery of happy days, but Kingston-based folk-rock singer Erika Lamon takes that idea and turns it on its head on her stormy piano-driven single “Yellow Sundress” from her forthcoming album Hues.

“Yellow Sundress” begins and ends with the ticking of a clock, creating a feeling of suspense and time running out, and it maintains that metronome beat under thunderous piano and introspective vocals. The song deals with a cut-off relationship where there’s a shortage of honesty, as well as some internal conflict on the part of the narrator.

The moodiness of the piano and Lamon’s willingness to delve into complexity is reminiscent of some of the best of Tori Amos, though the inclusion of a piano track on Hues arrived as somewhat of a surprise to Erika.

“I grew up playing the piano, but I stopped practicing when I left for university,” she said. “If there’s one thing I know about playing an instrument, it’s that it’s not like riding a bicycle. Getting back into it is long and discouraging. You’ve lost the ease with which you used to play, and touching the keys can conjure a sense of loss. But sometimes, in this beginner-state, ideas flow naturally.”

And then “Yellow Sundress” began to emerge.

“I sat down at the piano and started fiddling with the keys. A main piano line appeared,” she recalled. “I had some half-finished lyrics hanging around nearby, written a couple of days prior, so I reached out for them.”

The clock element is a very deliberate part of the song.

“All I could see was a guilt-laden love story unraveling as time ran out in the background, the ever-ticking clock,” Erika said. “The clock and keys intertwining in the beginning still give me shivers. I get that ‘the movie’s about to start’ feeling.”

Erika has been charming crowds with a sound steeped in reverie ever since her music-scene debut in 2013. In 2017, she released her self-titled debut EP to a packed house in her hometown of Kingston, ON and spent the next two years performing and touring from Toronto to Charlottetown. In 2020, Erika released her much-anticipated single, “Omen,” which received CBC radio airplay. Hues is her first full-length record, which just came out on Sept. 9 with support from the Kingston Arts Council, FACTOR, the Ontario Arts Council and Canada Council for the Arts.