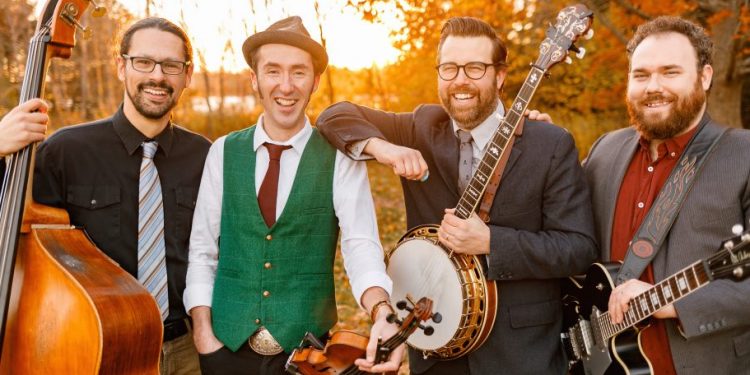 Dancing around the kitchen, especially if it’s a crazy chicken dance, can be exactly what the doctor ordered after a hard day, or just a much-needed break. And “All Around The Kitchen,” the instructive new single – available now – from award-winning Charlottetown, PEI-based family-folk artist Gordie “Crazylegs” MacKeeman, is all that and more!

A stress-shedding little ditty with toe-tapping fiddle and an infectious rhythm, “All Around The Kitchen” is fun for the whole family with prompts for the next dance move: “Put your hands on your hips/Let your right foot slip.” This is then followed by the pretzel-like, “Stop right still/ Put your hand on your head/Your other hand on your toe.” Of course, with the song’s looping chorus of “Cockadoodle doodle doo,” full-on chicken improvisation is strongly encouraged, if not required.

Merely one playful song from Gordie’s entirely fun and raucous two-part album, Folk For Little Folk, the project was penned during the pandemic when Gordie became more acutely aware of how he might entertain his own children. “We spent many long days listening to music, dancing, and creating music,” he recalled.

He then recorded the album, mostly live, with the help of some of the best musicians on Prince Edward Island. It was a welcome project, considering they had all been cooped up in their homes for way too long.

“We had all been deprived of live performance, and it was really exciting to play together again,” Gordie said. “We did have a little bit of help from some friends from afar creating this album. Dom Flemons of the famed Carolina Chocolate Drops was able to add his amazing percussion to a few songs.”

Gordie MacKeeman’s contagious charisma and wild stage antics have forever earned him the nickname “Crazylegs” and make him the perfect fit for not only entertaining children but molding young minds. When not on the road, Gordie works as a daycare teacher and knows how to get kids dancing.

Gordie has played with numerous award-winning groups throughout the years, most recently his own group Gordie MacKeeman and his Rhythm Boys. On the international scene, Gordie has taken his uncommon virtuosity and engaging stage presence around the world with stops at Denmark’s Tonder Festival, the UK’s Glastonbury Festival, Merlefest in North Carolina, the Port Fairy Folk Festival in Australia, and more.

Along the way, Gordie has collected a mantle full of awards and recognitions — most recently winning the John Lennon Songwriting Contest for Folk For Little Folk’s “Snaccident” and an East Coast Music Award for Children’s Performer of the Year. The latter adds to his grand total of 16 Music PEI Awards and East Coast Music Awards for his albums, Folk for Little Folk Volume 1 (2021), Dreamland (2019); Laugh, Dance Sing (2015); Pickin’ n Clickin’ (2013); and his self-titled debut album (2011).