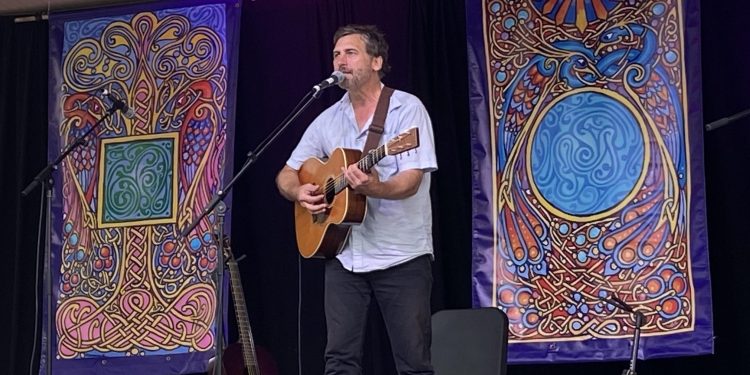 It’s day three of the Goderich Celtic Roots Music Festival’s weekend edition, but festival events have been going on since Aug. 1. Even on the final day of what must be a long week for the volunteers and crew, warm welcomes abound. This seems to have a domino affect on everyone from the festival goers to the performers, who are eager to share a smile and spare a moment to talk with each other.

I’m a huge fan of Celtic dancing, so going to watch the dancing is a must. I make a bee-line to the Dance Stage to see the Step Dance Showcase featuring Jake James, Kyle Waymouth, Emily Jean Flack, Tom Fitzgerald, Julie Fitzgerald and Dan Stacey among many talented dancers. It’s a sunny, humid day, but the breeze from the lake picks up over the Dance Stage as the crew and performers prepare for the show.

The tap that is characteristic of Celtic styles of dance, makes it difficult to contain step dancing under the umbrella of “dance” only. It really embodies an immersive form that is both dance and music at once. Many of the dancers in the showcase are also talented musicians in the festival line-up, including Emily Jean Flack, Dan Stacey and Kyle Waymouth.

Emily, Dan and Kyle explain to the audience some of the distinctions between the different step dance genres, from the Ottawa Valley Step to the Irish céilís to the English clog. These dances also have different regional variations. Today at the Dance Stage, most of the dances being showcased are Ottawa Valley Step. These dances draw their moves from the “famous four” that form the core choreography. With group step dancing, usually what happens is that each of the dancers takes turns showcasing their moves, which include their own distinct renditions with respect to these famous four dances. 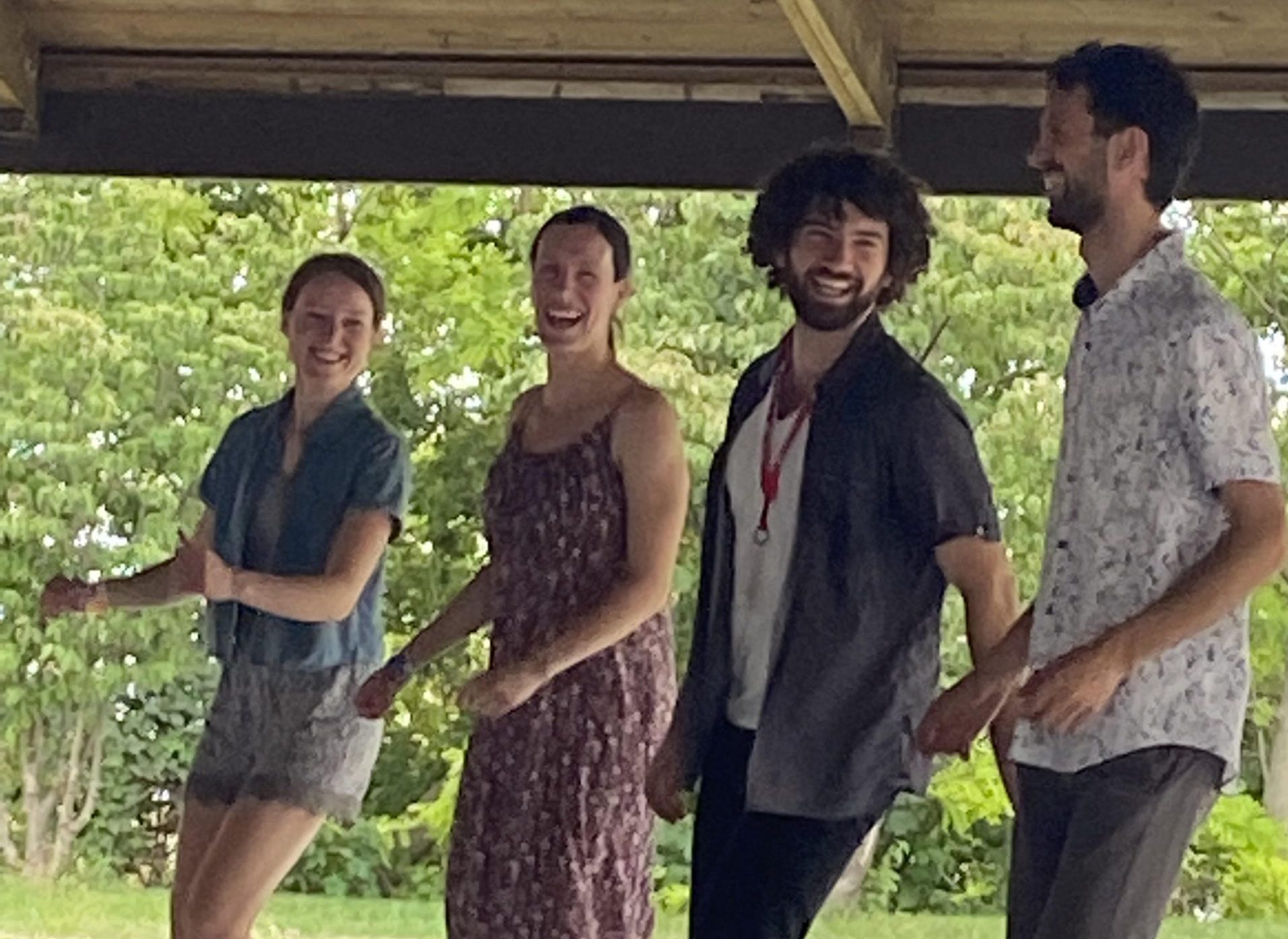 The dancers. Photo by Lisa Iesse.

Something unique about step dance is that it has never really had a governing body prescribing how it should be taught or practiced.  It’s always been a community-based practice and tradition. Kyle also explains that similar to music genres becoming almost non-exist, he finds the same thing is happening with step dancing. There is a sharing that takes place over time between dance genres. Tap dance particularly has strongly influenced variations of modern step dancing.

Step dance events, which were traditionally held as contests, are becoming more rare. This makes the chance to witness them something very special. All the dances performed at the Dance Stage are breathtaking. The most spectacular dance concludes the show, with all the dancers gathered together onstage.  In a spectacular immersion of sight and sound, the dancers use mixed choreography and move in variations of synchronized and non-synchronized patterns. The thundering sound of the dancing band vibrates across the stage. As they stomp their feet, the taps of their shoes hit the ground in a mix of heavy, long and short rumbling bolts. The dancing is met with cheers, applause and and Irish whoops, which echo across the stage area.

It takes years of practice to achieve the level of skill and endurance these dancers demonstrate. The performers make it look easy, but even just a minute of performing these dances is demanding and exhausting. 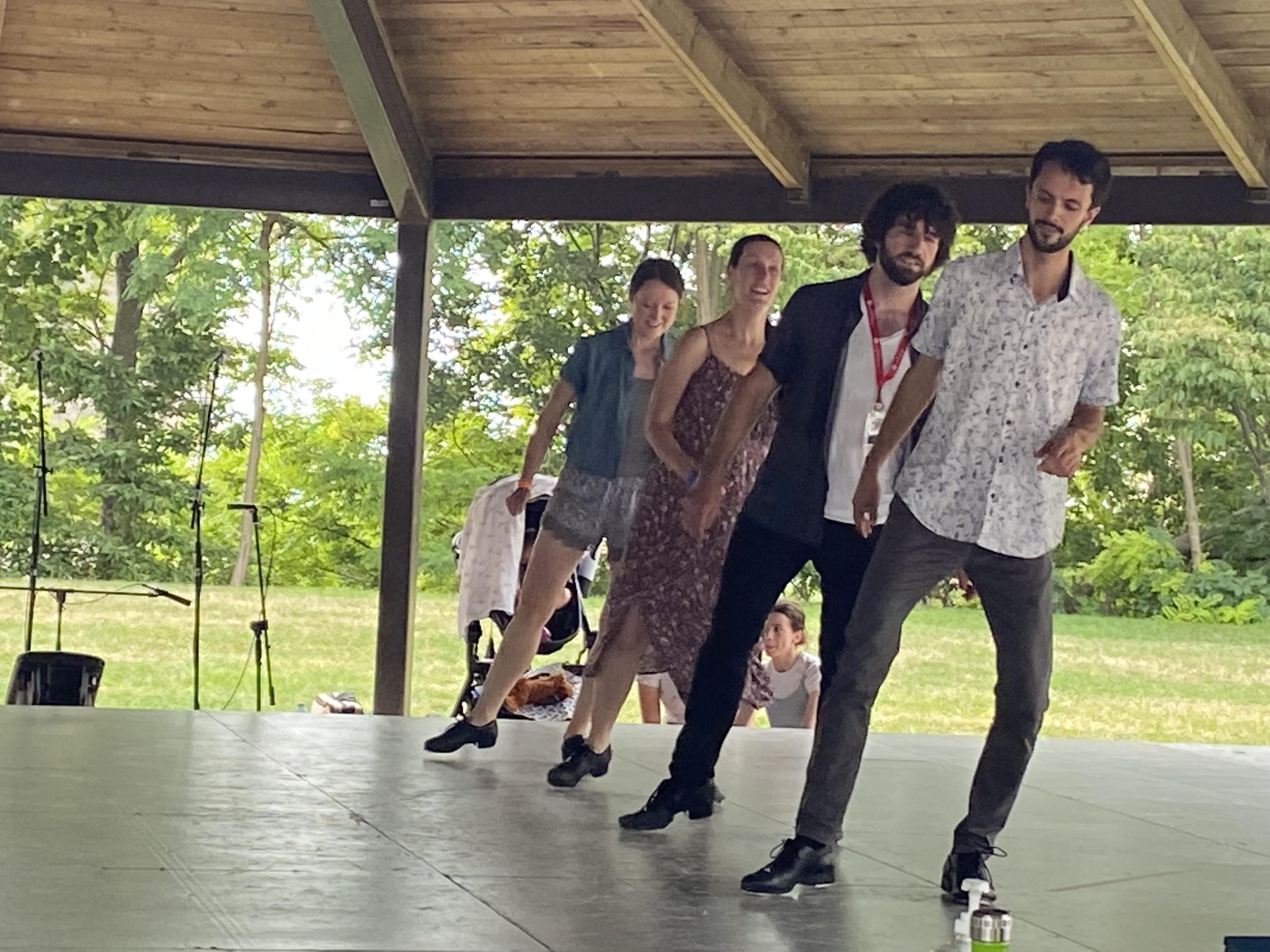 The dancers. Photo by Lisa Iesse.

Did you know that step dancing can improve your hockey game? Emily told a funny story about a cousin who wanted to quit step dancing, until his hockey coach noticed that the step dancing was giving him an edge in the game, and ordered him to keep dancing!

I find my way to the festival’s onsite pub for a taste of Celtic Fog! the festival’s beer crafted by local Goderich brewery Square Brew. Golden, citrusy, refreshing, and crisp, it’s a perfect treat for a hot August evening.  Taking the first sip, I can hear something sparking again from the Main Stage area, so I head back to my lawn chair, which has now found it’s own little regular spot among the other lawn chairs. But first, I couldn’t resist the tempting poutine from the Wicked Witches of West Street. Their poutine is heavenly delicious! The portion size was generous and the price reasonable. I noticed actually that all the food vendors at this festival offered yummy menus at reasonable prices.

Although the day started off sunny, a mass of dark grey clouds seems to have rolled in almost out of nowhere. A cool wind has also arrived and is gaining momentum quickly. I feel a few drops of rain. Then a few loud cracks of thunder echo across the sky. On that note, most of the audience members decide to make their way out of the festival gates. However, about 300 or more die-hard music fans remain, still itching to catch the line-up of evening acts!

Dan Stacey and Kyle Waymouth on the Main Stage

Fresh from the Step Dance Showcase, multi-talented performers Dan Stacey (on the fiddle) and Kyle Waymouth (on the guitar) take to the stage this time to perform an eclectic series of traditional Irish and French Canadian tunes, together with their own original compositions.

Among the first songs they perform for the resolute crowd, is a jovial performance of “Madam Maxwell,” a song written by harpist  Turlough O’Carolan, who is generally regarded as Ireland’s first great composer. Turlough lived during the 1600s, and despite the fact he was blind spent much of his life travelling throughout Ireland. He would write music for people who took him in along his journey.

Kyle’s performance of the song “Perth Hills” from his 2020 album is one of my favourite moments. The guitar begins bright and clear, interlacing with the sweet twang of the fiddle. The audience claps their hands to the beat. Then layers of colorful rhythms accumulate into a driving whirlwind, as the audience lets out Irish whoops and cheers. 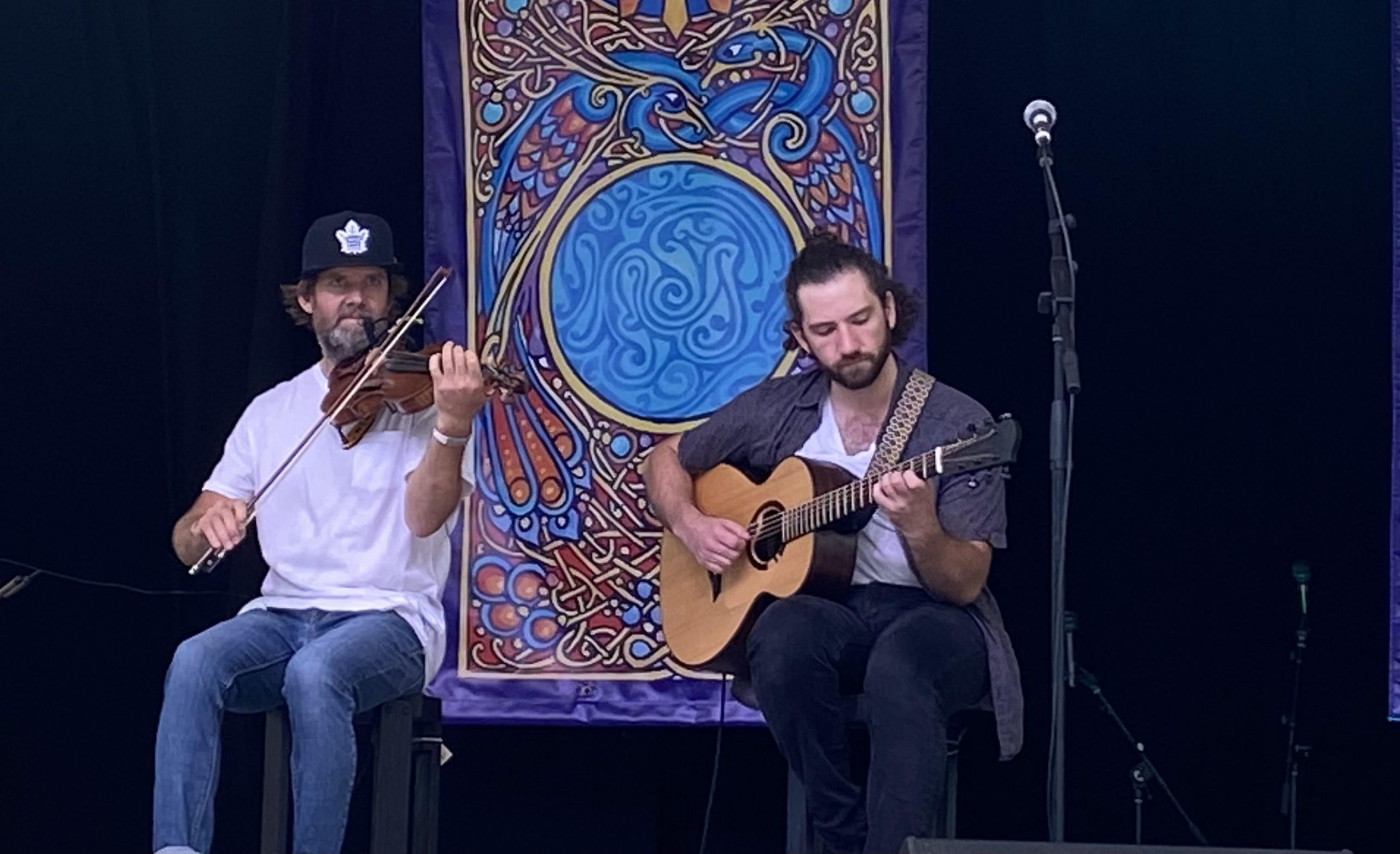 Another favourite moment comes when Dan leads a melodious live rendition of “O’Carolan’s Draught,” a happy, mellow tune sure to lift the spirit of even the most skeptical music lover. As Dan ponders, the word draught (spelled draft in Canadian English) from the song’s title has many meanings, and it’s uncertain what O’Carolan’s intended usage was.  Dan wonders whether the song is about a music draft or a draft of beer, which draws laughter from the crowd. The song seems to offer a good example of both definitions, evident from its enchanting affect on the audience.

A brilliant performance of Liz Caroll’s “The Diplodocus” jig takes us back to the land before time until “The March from Oscar and Malvina” transports us again full circle to the Emerald Isle.

During the show, Kyle played some of the music fresh from his new album, Inchoate, by Waymzy. Dan’s new solo album, Kid Who, is also a must to check out.

Joe Crookston on the Main Stage

With the dark clouds just clearing, Joe Crookston daringly plays “Fall Down as the Rain,” a song he wrote on a travel banjo while on a trip to Boulder in the Cascade Mountains.

Living in Ithaca, Joe explains that there are some really interesting connections between the history of the land and the lives of the people there. Ithaca sits at the northern tip of the Appalachian Mountains. When the mountains formed, they created cracks in the landscape, which contributed to the creation of valleys and gorges in the area. Because of that, radio waves could not make it in to the valleys for a long time. Many people took to playing banjos and fiddles outdoors, something local residents became known for in the 1960s, which still continues to this day.

Joe has an uncanny ability to channel joy, humour, sadness and hope all at once. He does that just by speaking with the audience, and of course, through song. The performance of his bittersweet, beautiful song simply titled “Garlic” is one of the most moving moments of the festival for me. 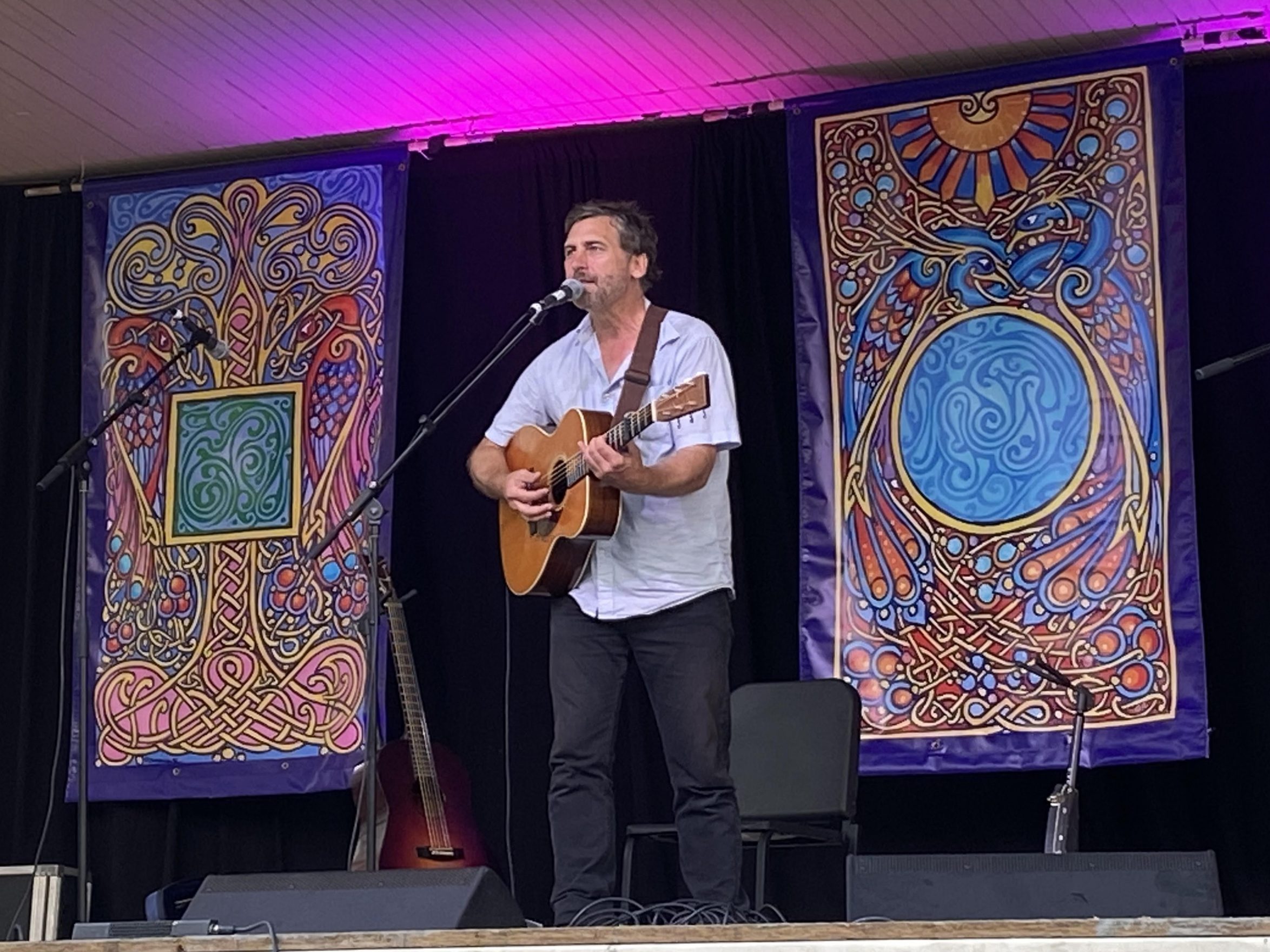 During the show, he picks up the fiddle to play a powerful, stirring rendition of “Pretty Sarro.” His performance also features a riveting rendition of Supertramp’s “The Logical Song.”

Joe shares the story behind his Martin Guitar, passed to him after the death of his mother. The guitar had serious sound issues so he ended up transforming it into a brilliant slide guitar. He then shows us what that guitar can do with the fierce, spirited “Rattlesnake Song,” which receives an extended round of applause, cheers and howls from the audience.

Joe thanks the audience again and concludes with a tender performance of his new song “Turning Golden.”

These last moments of the festival are special also because they almost did not happen. The looming thunderstorm seemed to appear almost as quickly as it disappeared, leaving no trace of its passage. Maybe all along it was Sionnach, the Celtic fox playing tricks on us.