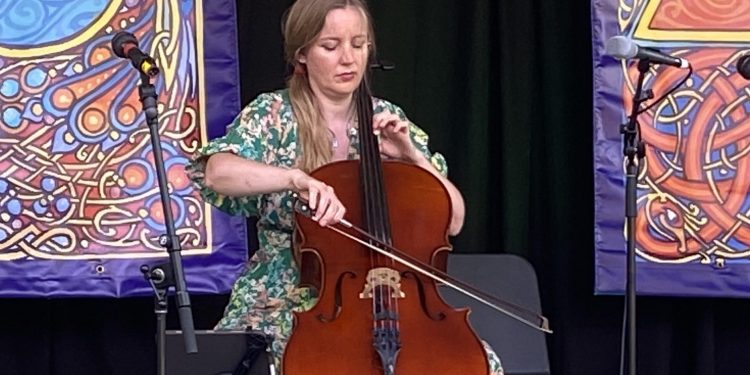 It is Saturday, Aug. 6, day two of the Goderich Celtic Roots Music Festival. The summer sun is shining bright and hot as can be. Festival-goers share the shade of the countless tall trees that inhabit the park, as we eagerly take in the day’s anticipated line-up of shows.

As I walk into the festival gates towards the lake, I hear a joyous harmony coming from the other side of the path. I had planned to head to the Dance Stage, but the music is welcoming and enticing. When I reach the performance area, I can see I’m not the only one who feels the pull. A bustling audience has gathered around the Kevin & Regina Dailey Stage to hear RUNA perform a bright live rendition of “Saints and Sinners.” 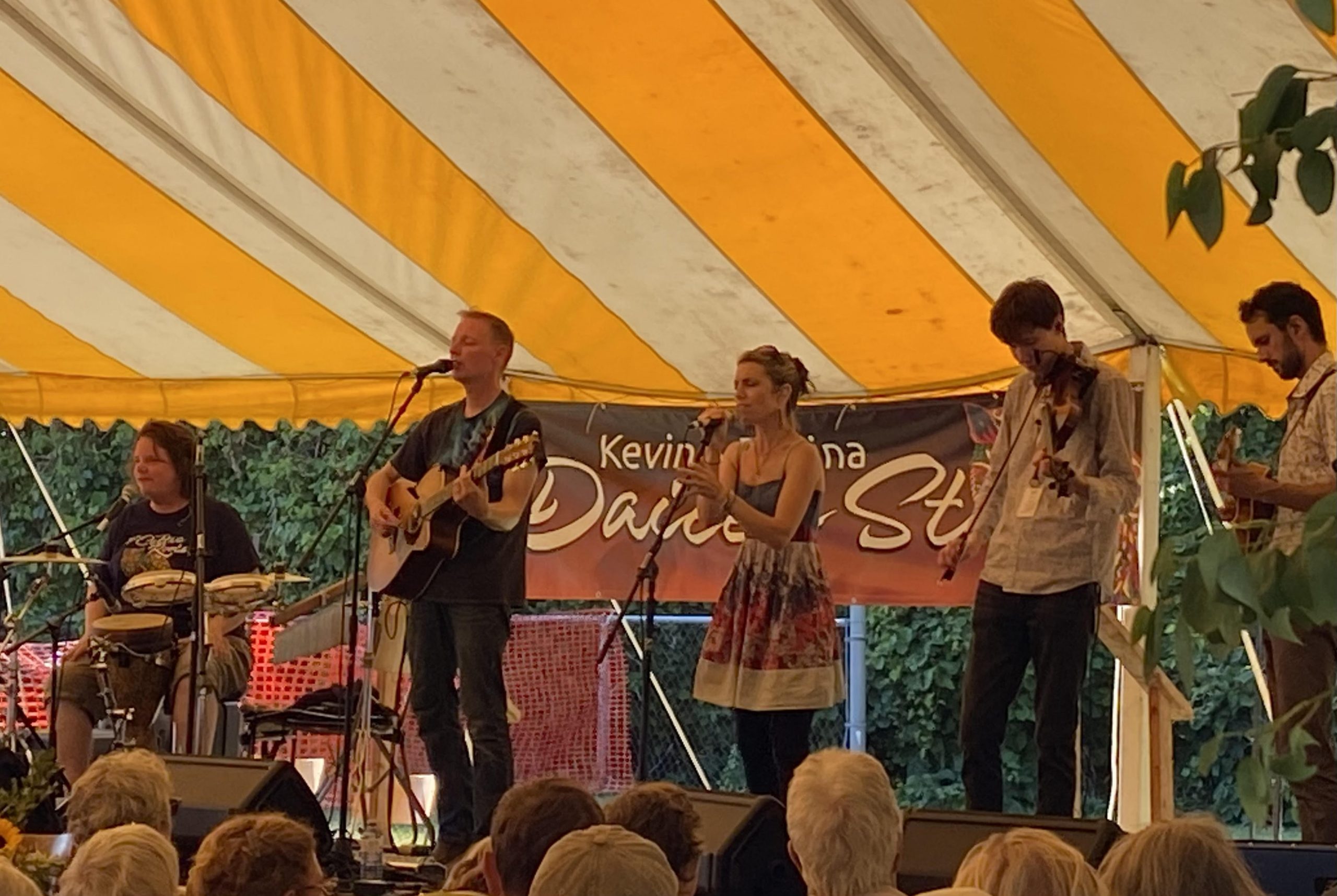 There is definitely an alluring and infectious energy brewing here at RUNA’s show. Without any prompting from the performers, the show quickly transforms into an audience sing-a-long, complete with the most irresistible Irish lilt. This is followed by a folk-infused rendition of Hoagy Carmichael’s jazz-blues classic “Ole Buttermilk Sky,” which leads into a lively interactive performance of La Bottine Souriante’s “La Ziguezon.”

With each repetition of the chorus:

The audience joins in loudly

The most climactic moment is the performance of “Dance on the Graveyard” from their album Ten: The Errant Night. One audience member gets up to dance, which seems to open the door for more and more dancers coming out of the woodwork so to speak. Before you know it, there is a growing dance floor in front of the stage. Dancers stomp their legs and feet enthusiastically with the layered rhythms and beats of the percussion, guitar, fiddle, mandolin, and vocals.

After RUNA’s live performance, I walk towards the music coming from the festival gates. At the Greeting Stage, an intimate audience has gathered to witness a rare live collaboration between celebrated Irish-American flute and whistle player Joanie Madden (and lead musician of Cherish the Ladies), acclaimed Toronto based pipe musician/composer/arranger Ross Griffiths (and member of the trio North Atlantic Drift), talented whistle and bodhran instrumentalist Mark Dunlop (and one of the founding members of the acclaimed award-winning Scottish band Malinky), acclaimed flute/whistles instrumentalist Kozo Toyota, and acclaimed guitar/banjo/mandolin instrumentalist Koji Nagao (members of the Tokyo-based award winning trio O’Jizo).

I was able to catch the cosmic final moments of the show. All I know is that the music created in their union was unprecedented and is only possible if they decide to get together to do this again. Are you reading this Joanie, Ross, Mark, Kozo and Koji? 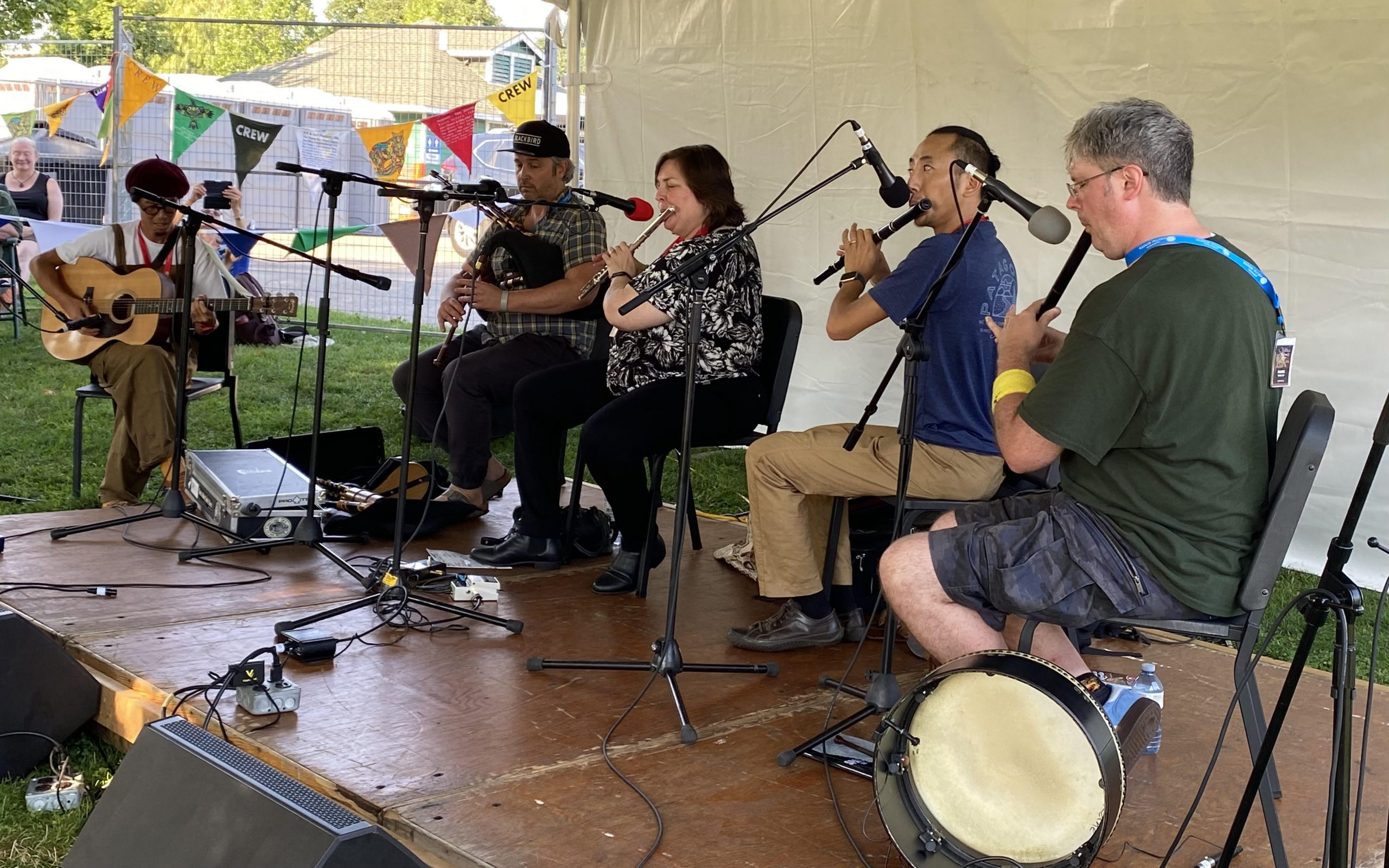 Audience members rise to their feet to applaud. From the stage area to the far corners of the park, I hear whistles and cheers. As folks walk back towards the lake, where more shows are scheduled to begin shortly, I can hear audience members still raving about their performance. This is the festival moment when I wish I had the ability to travel back and forward in time to catch performances at more than one stage. However, missing the full show at the Greeting Stage definitely inspired me to check out more music from these gifted artists.

Just before Clíodhna Ní Aodáin begins her performance, the cool evening breeze arrives at last. Clíodhna starts with a deeply riveting song titled “Reconciliation,” inviting us to take a moment to make peace.

Among many highlights of Clíodhna’s performance is the delicate but powerful “Cailleach na gCrann” (“The Tree Witch”). Clíodhna talks with the audience about the story behind this song she wrote as an homage to nature. During the COVID-19 crisis, she developed a closer relationship with the natural world around her. In this song, she honours the trees with the voice of the cello.

Clíodhna also hit a high note for potato lovers, including myself, who occupy an abundant presence in this audience, with a piece she dedicates to the love of the “wee potato!” Initially amused by Clíodhna’s reflection on the shared love of potatoes, we soon find ourselves taken aback by the bittersweet melody, rich with jazz textures and resonant twangy rhythms, flowing from her hands.

Kozo Toyota, Koji Nagao and Hirofumi Nakamura (who together form the Tokyo based trio O’Jizo) then take to the stage to perform a series of magnificently executed pieces that combine traditional Celtic music with jazz and world music. 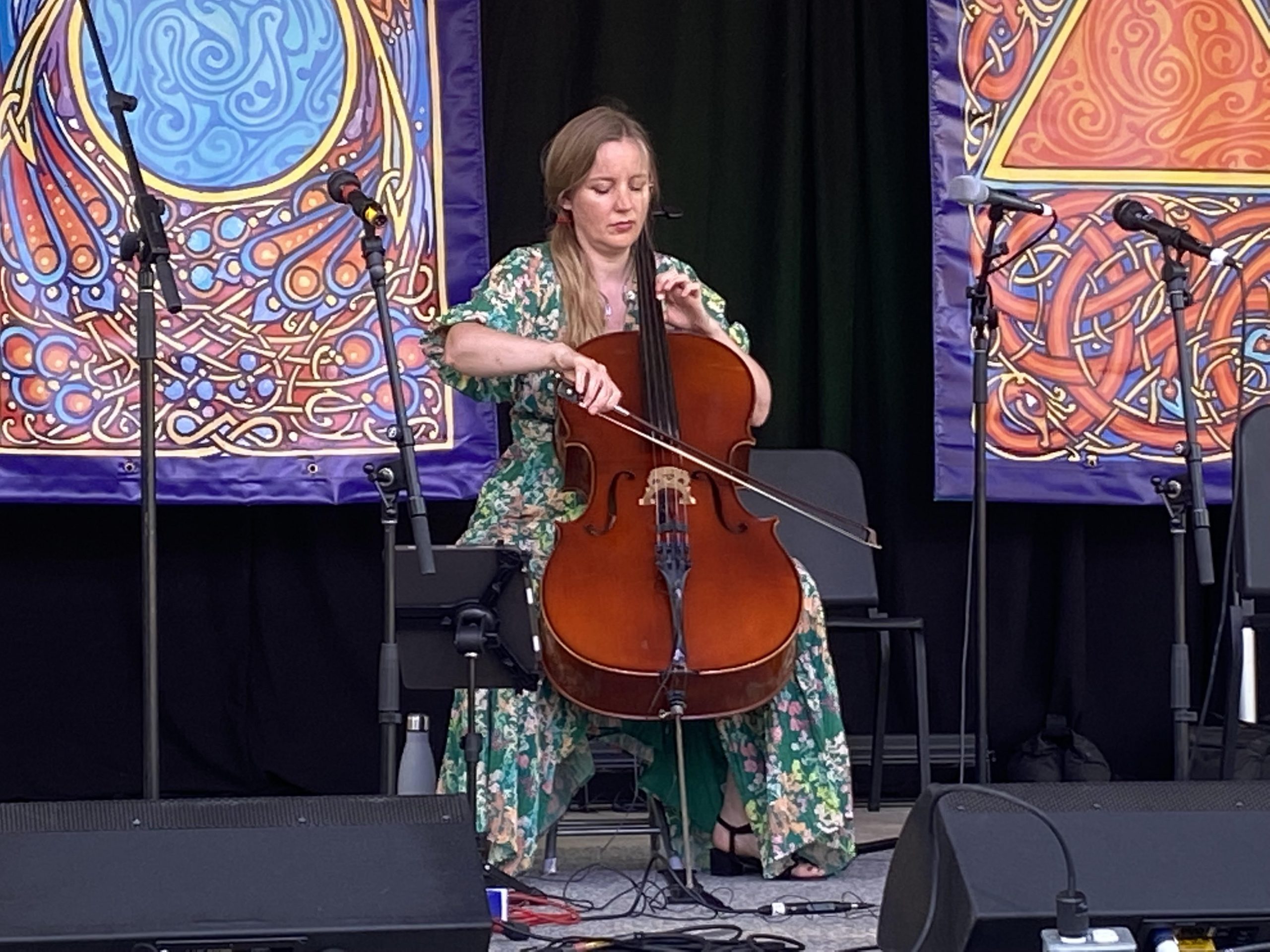 One of the many memorable moments was the vibrant, colorful performance of “Journey to Big Country” from their 2017 album Via Portland.

In a touching moment onstage, the band plays “Three G,” consisting of “Alasdair‘s Tune,” “Besova,” and “Conspiracy,” the latter having been composed by Joanie Madden, who has become a mentor and a friend to the band. A vibrant, bright flute interweaves magically with the dark, rich, colorful rhythms of the guitar and bouzouki.

In a bittersweet moment, Clíodhna joins Kozo, Koji, and Hirofumi onstage to perform once more, and to extend their deep gratitude to everyone who has made their journey to the festival possible: their hosts who opened up their homes this week to welcome them, their fellow performers, the hundreds of volunteers, the audience members, and the organizers, including Cheryl Prashker and Michael Patrick Farrell. Before playing one last song together onstage, Clíodhna Kozo, Koji, and Hirofumi extend a warm Mata aimash? (see you again soon). 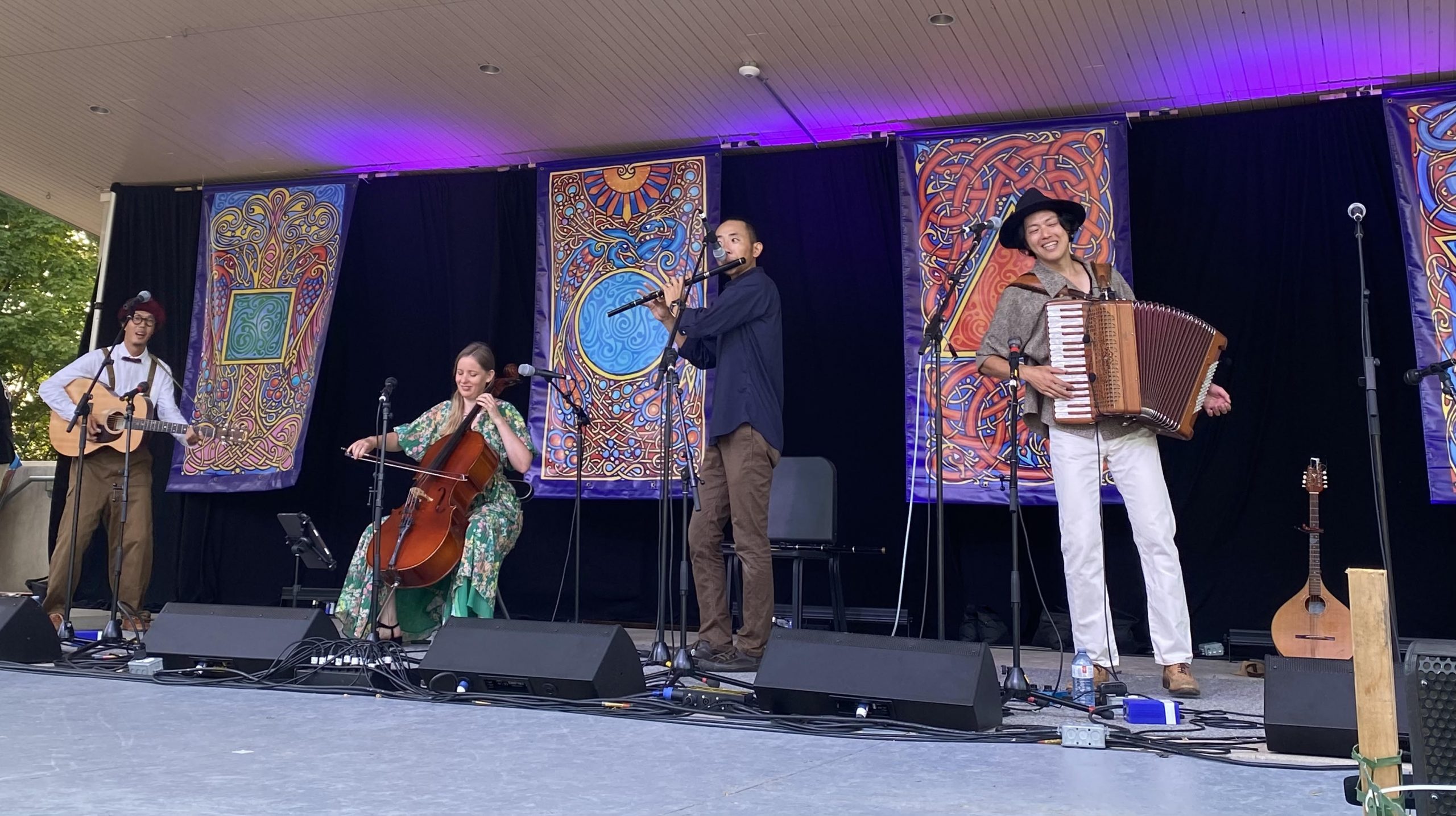 Hirofumi swaps his bouzouki for a robust accordion, that flows smoothly with the buttery flute, jangling guitar, and vibrant cello. The string acoustics interweave in layers that expand and contract spontaneously with the flute, before bursting forward at full speed. The audience joins in, clapping their hands in sync with the beat.

O’Jizo and Clíodhna’s live performance together onstage was one of greatest moments of the entire festival for me. Judging by the reaction of the audience, it seems that this was a favourite festival moment of 2022 for many.

Despite the extreme heat of the day, the audience easily numbers in the hundreds. At the conclusion of their performance, the crowd responds with an extended standing ovation.

Clíodhna Ní Aodáin and O’Jizo are the first winners of the Robinson Emerging Artist Showcase award, selected by audience members who voted online at last year’s festival. Artists from 15 different countries competed for the honour. 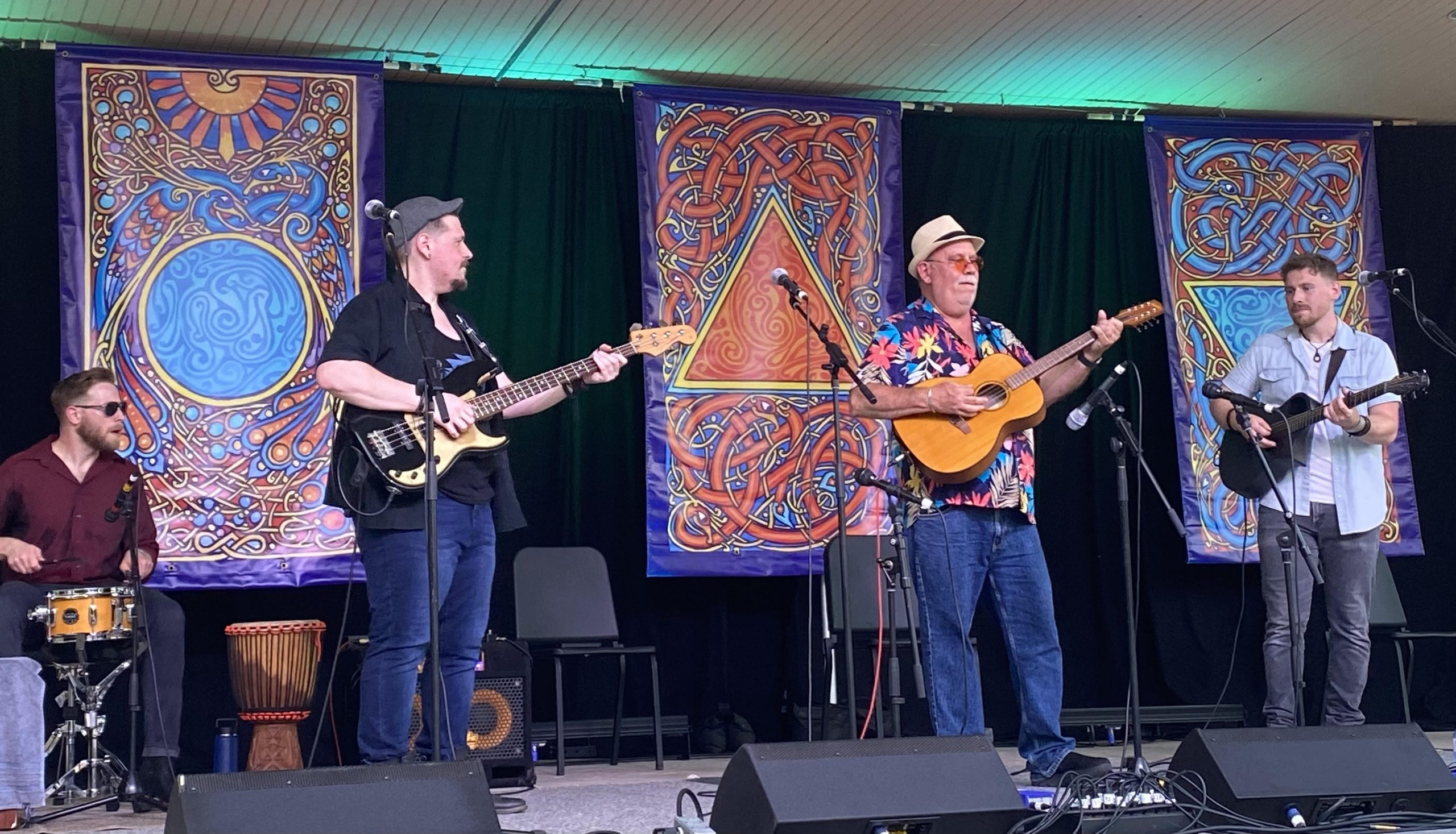 After a brief intermission, Emory Lester, sons Justin and Josh, together with percussion instrumentalist Colin Lewis, bring their special mix of soulful folk bluegrass to the Main Stage.

The rich harmony of “Hogwallow Flats” and the dazzling “Front Royal,” a song about the town in Virginia Lester grew up in, wow the audience.

As the evening sun fades, the bright electric rhythms and galloping beats of “Heading South” light up the crowd.

The most moving moment of this performance for me was the live rendition of Archie Fisher’s “Shepherd on a Hill.” This is a song of loneliness, a condition that has marked one too many of us in the last few years. The woody beats of the percussion and the haunting melody of the mandolin invoke a sense of shared vulnerability.

Their performance rises to a climax with a charging performance of “Mountain Air” that hits us like a burst of cool mist from a heavenly mountain peak. A rushing energy from the music flows through the audience. Hundreds of folks stay for the upcoming performances which run into the late night.

Correction:  A previous version of this story misidentified the last set of songs performed by O’Jizo.