Dispatches from the Goderich Celtic Roots Festival day one (Friday) 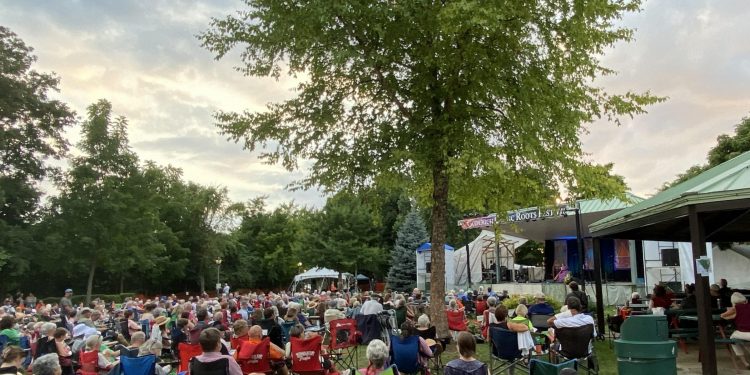 It’s an usually warm August evening on the shores of Lake Huron, marking a joyful, tear-jerking reunion, especially for long-time Goderich Celtic Roots Festival veterans. I speak with many people who have been part of the festival since it’s birth 30 years ago, and they are overjoyed to be back. Opening ceremonies begin shortly after 6 p.m., complete with in-person bagpipers adorned in magnificent full highland dress, doning their kilt tartans, plaid brooches, and piper socks. The organizers, crew, and volunteers gather by the Main Stage to wish everyone an emotional welcome back.

Cheryl Prashker, the artistic director of this Celtic festival, begins by acknowledging the land upon which the festival is taking place, the traditional territories of the People of the Three Fires known as Ojibway, Odawa, and Pottawatomie Nations. The Chippewas of Saugeen and the Chippewas of Nawash, known collectively as the Saugeen Ojibway Nation, are also traditional keeper of the land, she says. 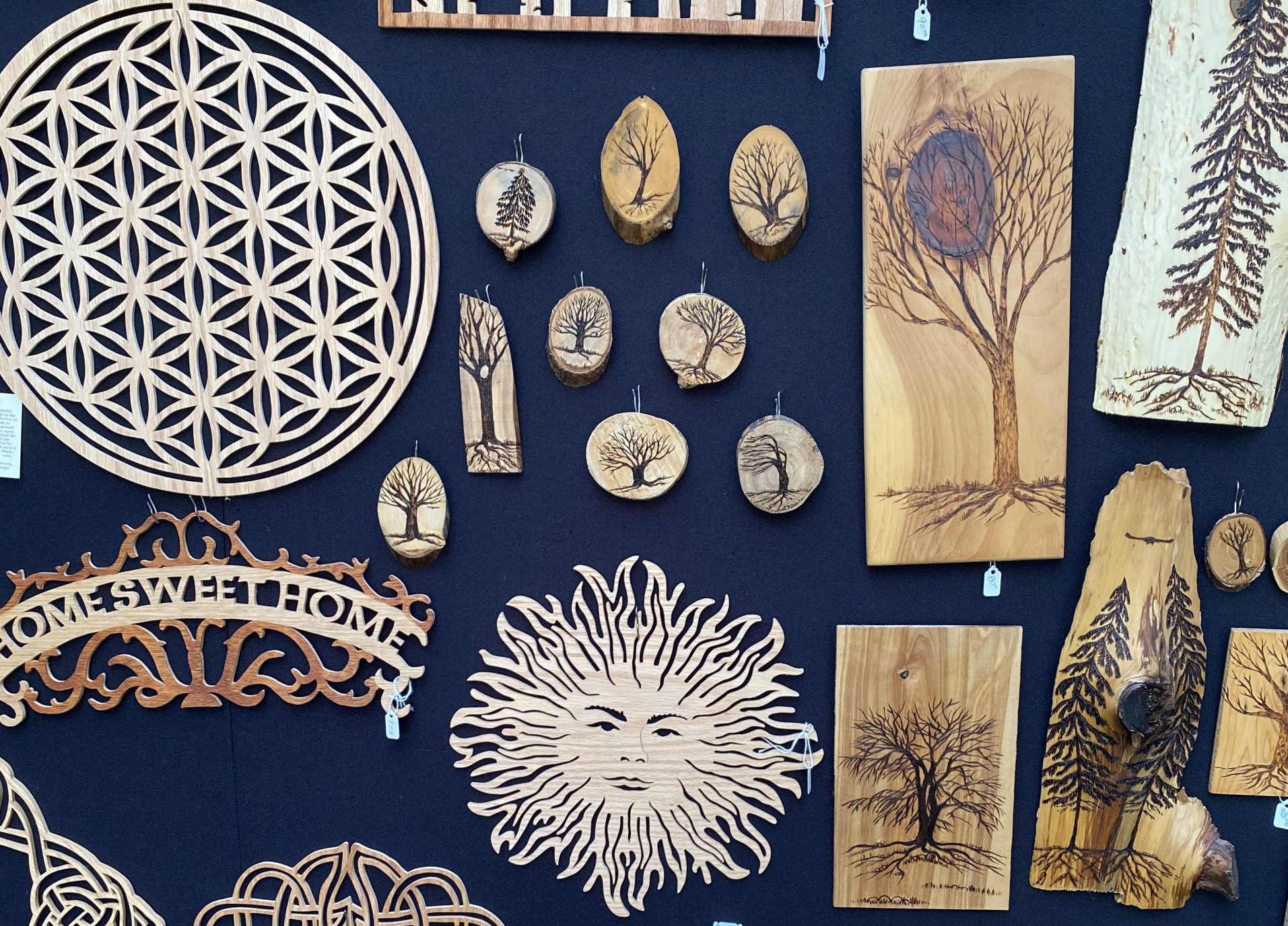 Offerings from artisans at the festival. Photo by Lisa Iesse.

Lisa Thompson, the local MPP, reflects on the ways this festival has transformed into a gathering place for folks from all over the world. In her words, “festivals like this matter.” She emphasizes the festival’s focus on diversity, that celebrates talent from all around world.

This year’s Ernie King Tradition Bearer Award is presented to Greg Reynolds, longtime festival organizer and passionate leader who I can tell, based on crowd reaction, is well loved here. The Auleen Theriault Young Tradition Bearer Award is presented to Kyle Waymouth, whose music career started here 10 years ago. He fondly remembers moments from his first years at the festival, including playing a song his band wrote in its honour, “New Trees.”

Without further ado, our festival hosts bid a huge Fáilte to everybody, for this is the Irish Gaelic word for welcome!

Amid a crowd that has grown increasingly giddy with anticipation, Inn Echo takes the stage to begin the music at long last. Introduced as a PEI-based band with roots all over the globe, they begin with their rousing, stunning “Storm.”

As the first notes of “Storm” sail in with the warm evening breeze, the crowd is empowered with a new energy. The audience members, volunteers, and crew, along with the vendors, are completely entranced with the awesome musical tempest that has made its way across the globe, and back to the Emerald Isle via the shores of Lake Huron.

Inn Echo’s Karson McKeown tells the crowd that the song “Storm” is actually named for a fluorescent pink drink from Austria. Such an aura also conveys the “all-nighter focus,” which the audience’s enthusiasm exudes. Audience members are in the hundreds here this evening. Most audience members have set up lawn chairs, a sure sign that we are here for the long haul! 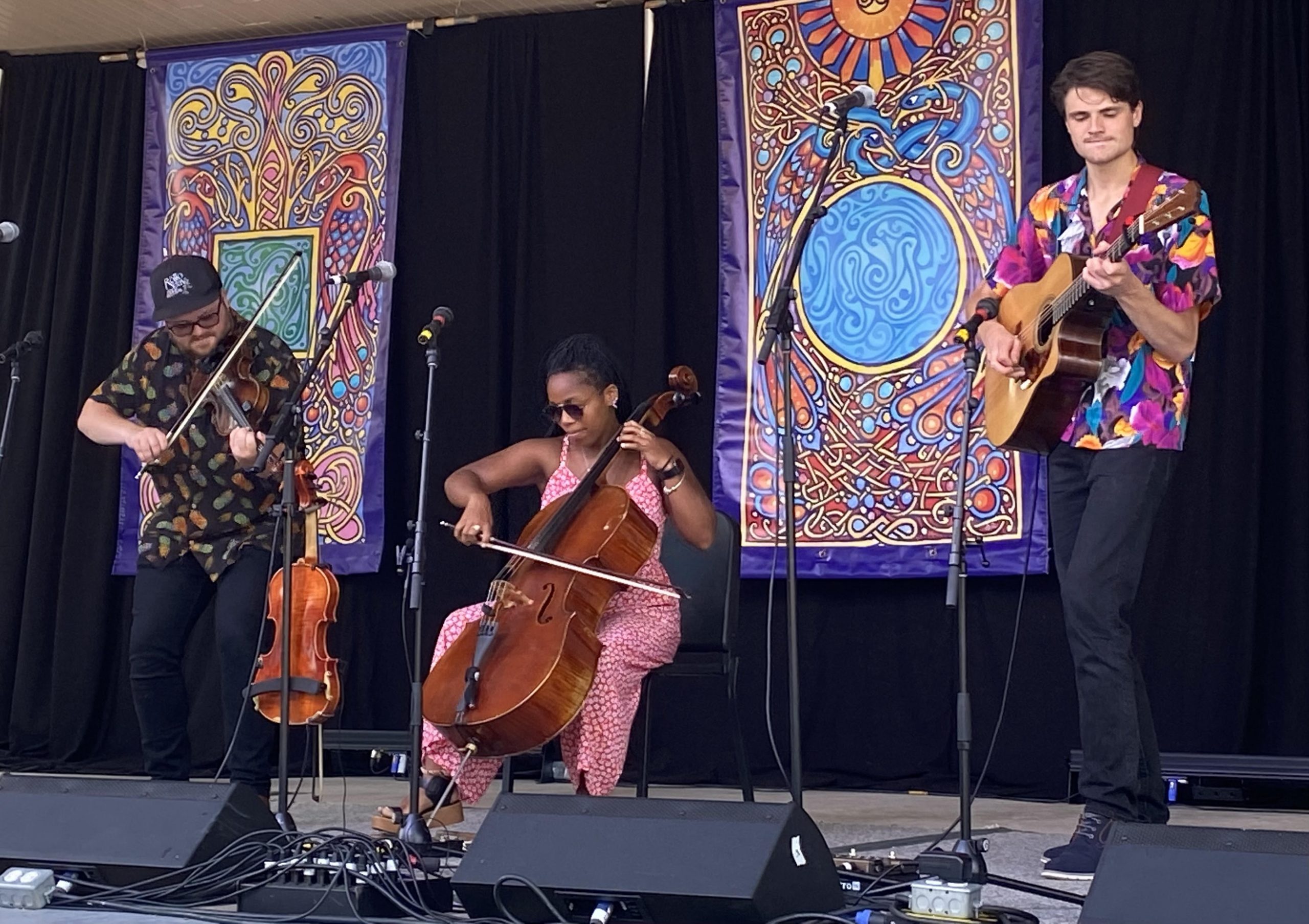 The music fills the air like a magical elixir.

This song is among many songs yet to be recorded in the studio, so this is a special treat for all the folks gathered here tonight.

Inn Echo takes us on a trip through the passages of time, to “Summers With Nan.” This is a song band-member Karson wrote as a birthday gift for his grandmother, who he would spend summers with in PEI. Seeing the many grandchildren with their grandparents here this evening, this is a special moment transcribed in the language of music, which is sure to inspire many memories for years to come.

There were many highlights of this opening performance, but my favourite was the performance of their song “275.” This is a song from their acclaimed EP Winter’s End, written by Karson McKeown and Tuli Porcher. Their song is also a way to answer the question, “Why did all of you go to PEI?” Karson explains that this is a question frequently posed to the band, whose members have roots across the world.

It remains a question that is difficult to answer. Each member of Inn Echo, Karson, Tuli, and Tom Gammons (the newest band mate), decided to go to PEI for different reasons. However, the main reason was the Holland College’s School of Performing Arts.

Another amazing highlight from the show is the brilliantly vibrant “Big Blue,” a song Tuli wrote about her house in Victoria, B.C., where she grew up. This is another new song, which will be included on their upcoming album, coming out in the spring. 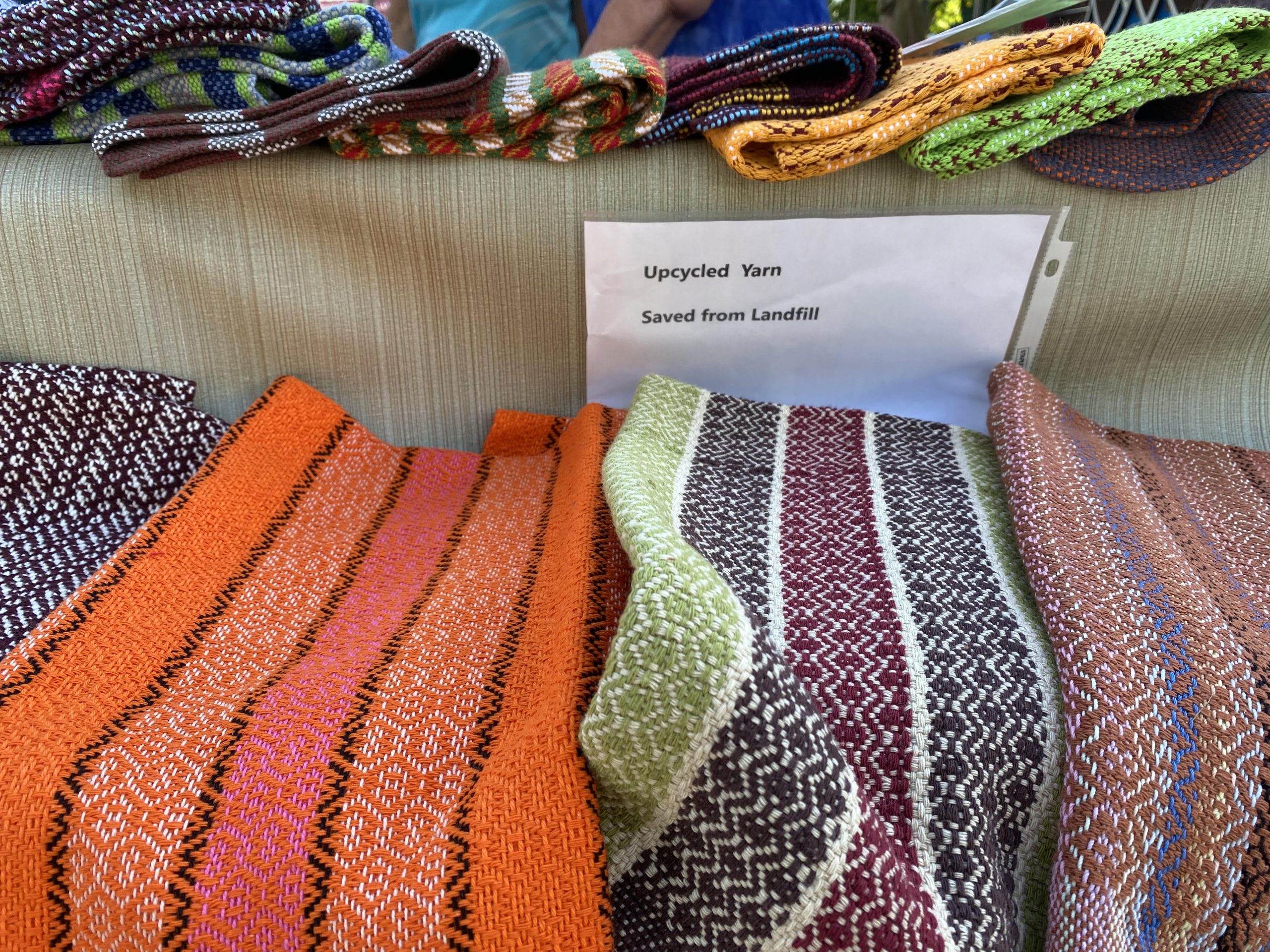 Tuli takes a moment to express how wonderful it feels to play live music together again for an in-person audience. A sentiment that is met with extensive cheering and applause from the crowd.

At the conclusion of their set, Inn Echo thanks the audience and the community of Goderich. Karson explains that he has always been a huge fan of this festival, and that the band is incredibly honoured to be playing at the festival’s 30th anniversary, even though not one band member is yet 30!

To conclude their set tonight, Inn Echo plays “In the Nick of Time,” a song the band recorded just one week before the COVID 19 crisis. Their groundbreaking, spectacular performance receives a standing ovation from the audience, solidifying the  arrival of Inn Echo and the return of the Goderich Celtic Roots Music Festival.

As Ailie Robertson enters the stage, our MC warns us of Ailie’s ability to steal the hearts of listeners. Wearing an elegant pink floral print dress, Ailie demonstrates her fierce command of the harp. The performance that follows catches us off-guard, a delivery that is enchanting, and so richly layered, enough to rival a full band of musicians.

Among the many highlights of her performance is the rich, colorful song “La Gueussinette,” transporting us to Montreal, a place Ailie called home a few years back.

Her live rendition of “The  Humours of Scariff,” with its Celtic-jazz fusion is a marvellous, climactic moment of the performance.

Ailie also performs “The Exploding Bow” and “Swerving for Bunnies,” a song she wrote after she nearly swerved off the road to avoid hitting a wild rabbit with her car.

Before playing her final song for the evening, in a heartfelt moment, Aileen gives an affectionate thank you to the people hosting her visit in town who have opened their home to her. She is pregnant at the moment, and has been amazed by the hospitality of the festival volunteers and organizers, quick to pick up her harp, refusing to let her carry anything.

As Ailie performs the last songs, the cool evening air rolls in. I see three majestic birds soaring above the Dance Stage. 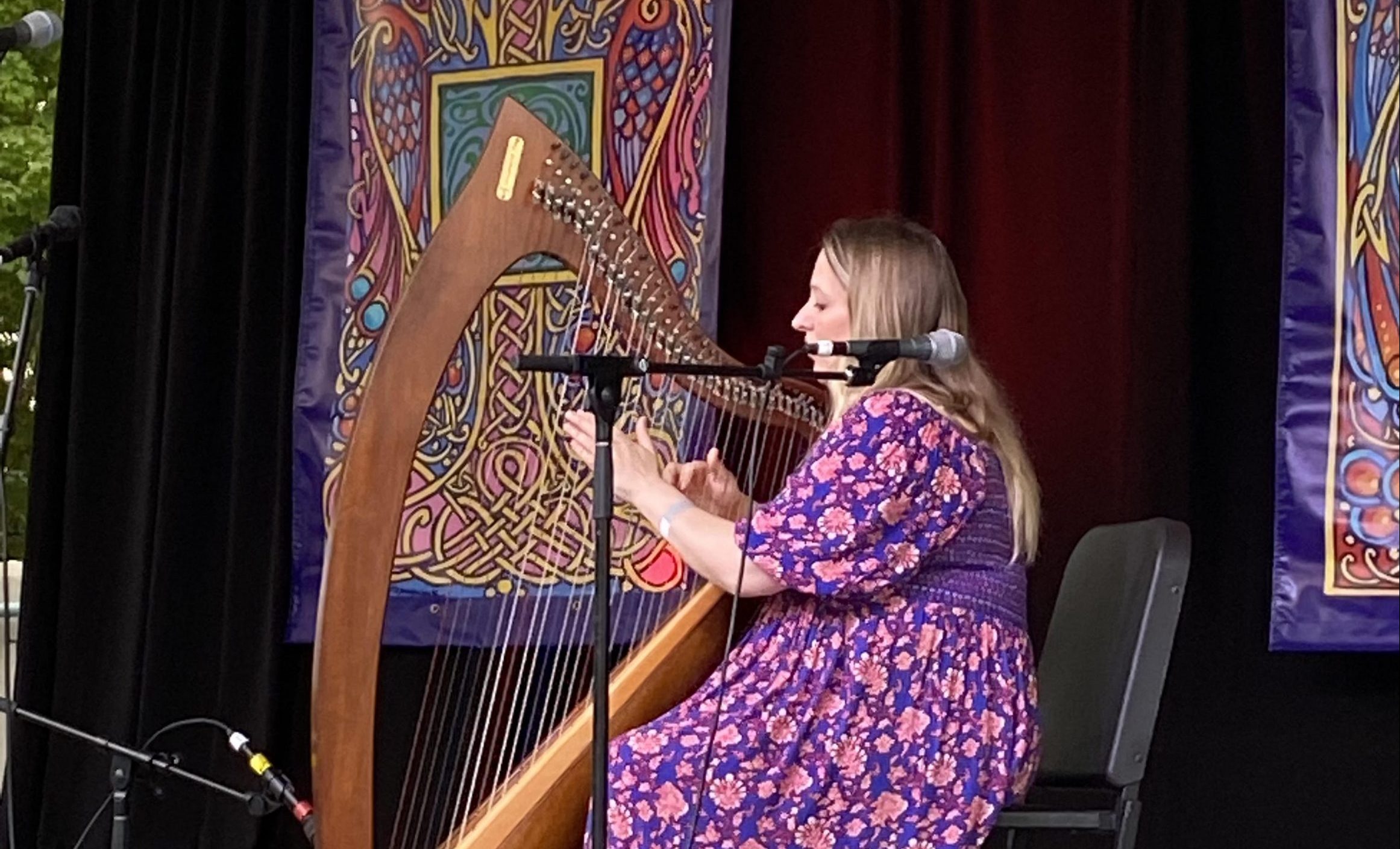 Ailie ends her show with a magically transcending tune, one she wrote about two years ago, which describes the haze that gathers over the ocean towards the end of the day.

At the conclusion of the performance, the audience reluctantly returns back down to earth, showing our gratitude with an extended appreciative round of applause.

I have to head back before it gets dark (hopefully without having to swerve for bunnies) but I can’t resist staying a few more moments for the alluring, multifaceted sonic symphony erupting from the mainstage as North Atlantic Drift performs.

I walk to the park gates and see the beautiful artwork and crafts showcased by the many vendors here. Ron of Solar Woodcuts, who together with wife Patti have created intricately detailed superb works, donated many of their pieces to the silent auction. The silent auction features a treasure trove of hand-crafted items, including a gorgeously crafted violin, hand-carved wood-works, handcrafted jewellery and more. As the cooler evening breeze comes in, I find the perfect something to warm my sandalled feet. Just ask anyone from the bagpipers of the opening ceremonies to the shrewdest festival veterans, and they will tell you: donning a cozy pair of socks is a smart way to step into the Celtic groove of the festival; just look at Sionnach, the Celtic fox (honoured at this year’s festival by artist Linda Wiebe). 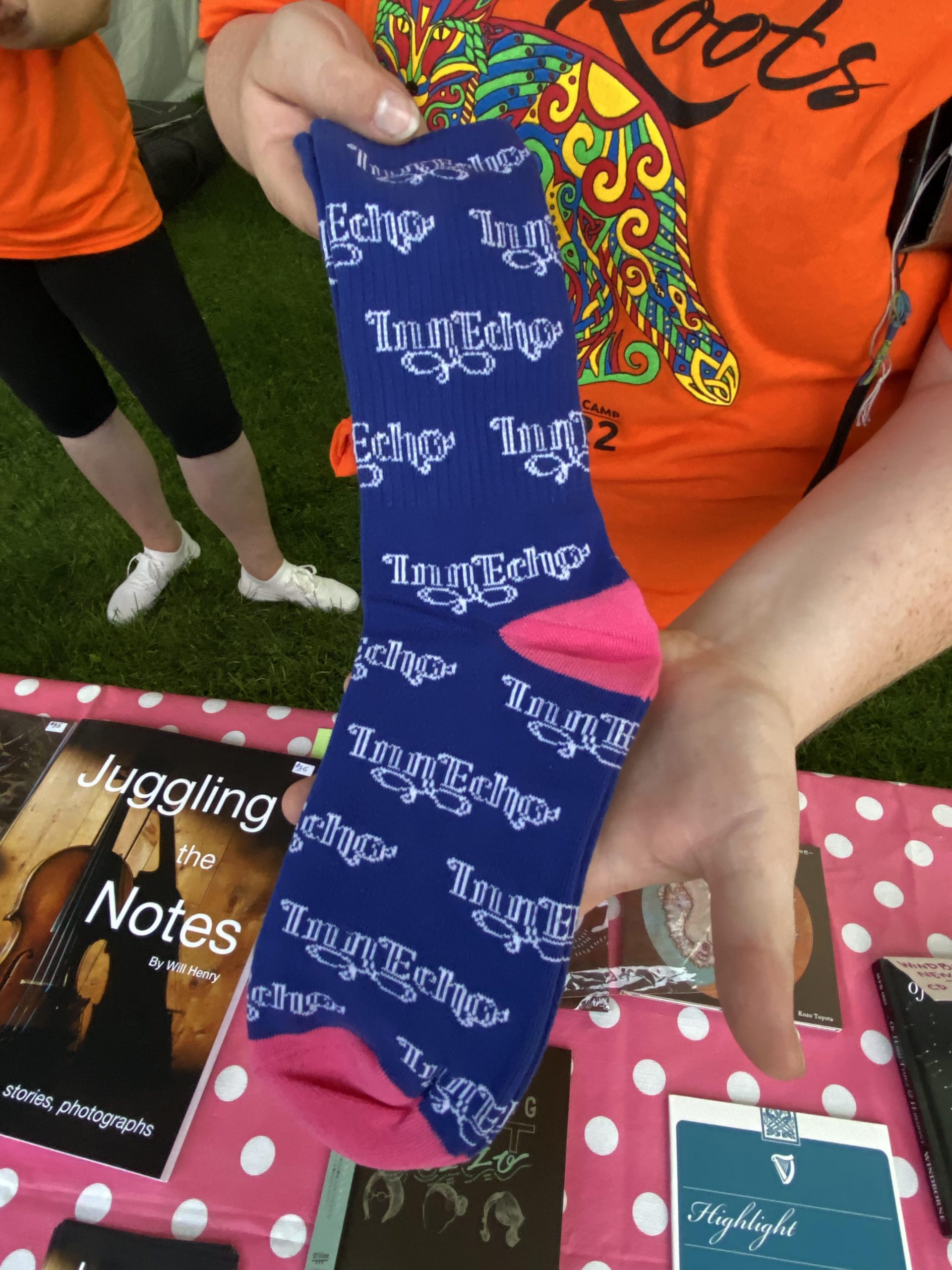