A beginner’s guide to Locarno: Tom Landa of the Juno-winning Paperboys’ OTHER band 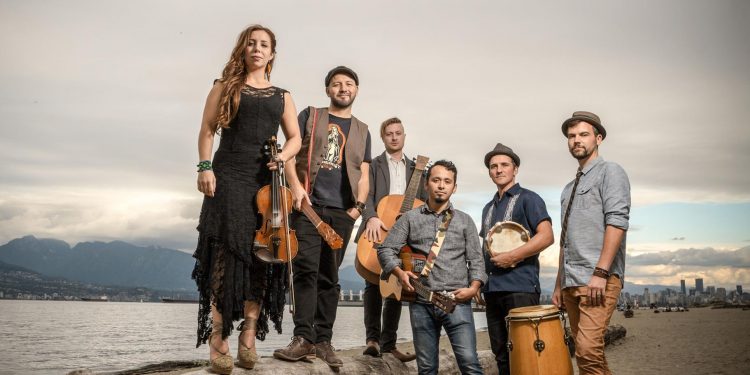 There is an abundance of great acts to catch at the 2022 Edmonton Folk Music Festival but one act I highly recommend is Locarno, a group fronted by Vancouver’s Tom Landa.

Tom is best-known for leading the Juno-award winning band The Paperboys. Whereas the Paperboys are known for their Celtic influenced folk/pop, Locarno focuses more on Tom’s Mexican heritage. Their amalgamation of Cuban, Mexican and pop music, combined with high energy, has proved to be successful for the band. They have appeared on the CBC, performed at the Rochester Jazz Festival and Luxembourg World Music Festival and have headlined many Canadian music festivals. I recently got to ask Tom a few questions to share with the readers of Roots Music Canada.

RMC:  Is your songwriting process different with the Paperboys than it is with Locarno? If so, how?

Tom: For sure. The process is different, mainly in that I am singing in Spanish and also using different instrumentation and musical idioms. One of the biggest differences that I noticed once our first record was done was that a lot of the songs on the record start with the chorus. This is very different to my work with The Paperboys, where the song starts with an intro, then a verse, pre-chorus and then the chorus. The songwriting also comes from a different place. Locarno is really a vehicle for me to explore my Mexican heritage and in my writing, I am influenced by Mexican folk music and the words also are about topics and subjects to do with my heritage and my background.

RMC: What was it that led to the creation of Locarno?

Tom: What led me to the creation of Locarno is that I had been incorporating Latin and Mexican rhythms in some of the Paperboys material, and really liked doing that and wanted to do more of it. I really wanted to start a project which delved into that music 100 per cent and not just some of the time. It was also an opportunity for me to explore different avenues and work with some different musicians and get outside of my comfort zone.

RMC: If someone is unfamiliar with Locarno, what can they expect during your set at the Edmonton Folk Music Festival?

Tom: For those who are unfamiliar with Locarno, they can expect a Latin fusion band that is mainly acoustic based. We lean heavily on Mexican musical idioms and use a lot of Mexican instruments. The majority of the music is original, although it is heavily influenced by Mexican traditional music. We are most definitely not a salsa band but more of an amped up Mexican/Latin folk band.

RMC: Who are the main musical influences for Locarno?

RMC: Is there anything you’re listening to these days that you’d like to recommend to our readers?

Tom: Yes, there is a lot of music that I can recommend to the readers. I actually publish a playlist where I share with people the music that I’m listening to. It’s called “Something Old, Something New, Something Borrowed, Something Blue.” As the name suggests, you get a bit of everything on those playlists. You can find these playlists on streaming services like Apple Music and Spotify.

RMC: What’s your favorite and least favorite part about being a musician?

Tom: My favourite part of being a musician is definitely the creative aspect of it. That is the songwriting, the arranging, the sharing of ideas, and turning something that is just a simple melody and some chords into a full-blown song. My least favourite part of being a musician is the amount of time I spend behind a computer typing emails. It is said that for every successful musician there is someone (or that same person) spending a lot more time in the business side of things than actually playing music. It’s a drag but it has to be done. My other least favourite thing is the amount of free content one is expected to create and upload onto social media. But that’s a whole other interview…

RMC: Coming out of the pandemic, what are some challenges you believe are facing those in the music industry?

Tom: Coming out of the pandemic still poses a lot of challenges for the music industry. We are slowly rebuilding, and this summer has been great with a lot of outdoor events being open again and a lot of festivals being open again, but our industry took a huge hit and venues are suffering. Musicians are struggling. Venues like performing arts centres and theatres have lost a great deal of their staff and volunteers due to Covid. Many musicians have had to take on other employment and seek other opportunities, which has put their music careers on hold or on the back burner. There is still a lot of hesitancy from the public to be in large gatherings, so attendance at a lot of shows and festivals has been lower than in pre-pandemic years. Still, I am grateful that things are opening up again and I’m very grateful that we live in a country where we have received so much help and assistance via grants and help from the government. I’m not sure how me and my colleagues would’ve survived without it.

I, for one, have recently been enjoying Tom’s playlists and am looking forward to catching his set in Edmonton. To take a listen to Locarno, or to find out more about the band, visit http://www.locarnoband.com

Who to see at the Goderich Celtic ...