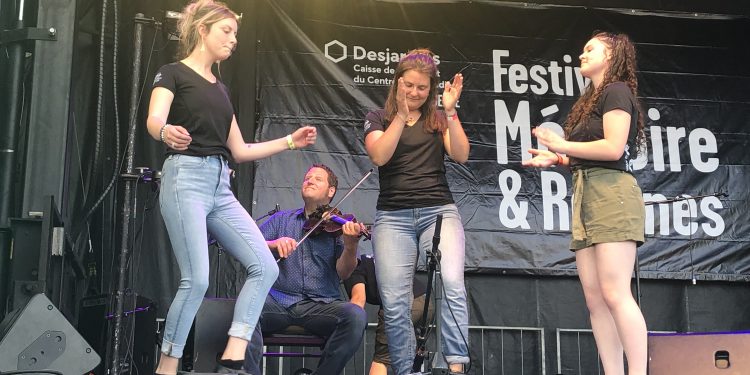 The Sunday evening Gilles Cantin main stage’s first performers were Emerald Rae and Jean-François Gagnon-Branchaud. They did a nice set of songs and tunes from Lanaudière region.

Next was a tweener: La Foulée stepdancers with André Brunet fiddling up a storm to give the dancers lift.

Grosse Isle took the main stage next. Fiachra O’Regan, Sophie Lavoie and André Marchand played a great set. There were tunes “en vielle,” tuned to AEAE instead of the usual GDAE violin tuning, for a fantastic full sound on Sophie’s violin.

Fiachra played a beautiful and sad Irish piece on the uilleann pipes, complete with the gorgeous chords from the resonators. Stepdancer Jessica St. Pierre came on stage to dance to a set of reels after which Sophie sang a sad complainte. The band was also joined by their guest, the well-known singer and storyteller Michel Faubert for a lovely song before their rousing finale.

Next up was another tweener: Galant tu Perds Ton Temps, five ladies from Lanaudière region singing call-and-response songs. They were accompanied by Louis-Simon Lemieux on guitar and feet.

The McDade’s were next welcomed to the stage. They are three siblings from Edmonton: Solon and Jeremiah McDade and sister Shannon Johnston. They grew up in a family band and went to French schools. There was lots of jazz in this performance. Original compositions were juxtaposed with an arrangement of Gordon Lightfoot’s song “Sundown.” Jeremiah played the low whistle on some Irish trad tunes, accompanied by Shannon on violin.
Eric Breton from Quebec did a terrific job on percussion, including electronic tabla, dumbek, various cymbals and a cahon. Andy Hillhouse from British Columbia made complicated jazz guitar work look easy. 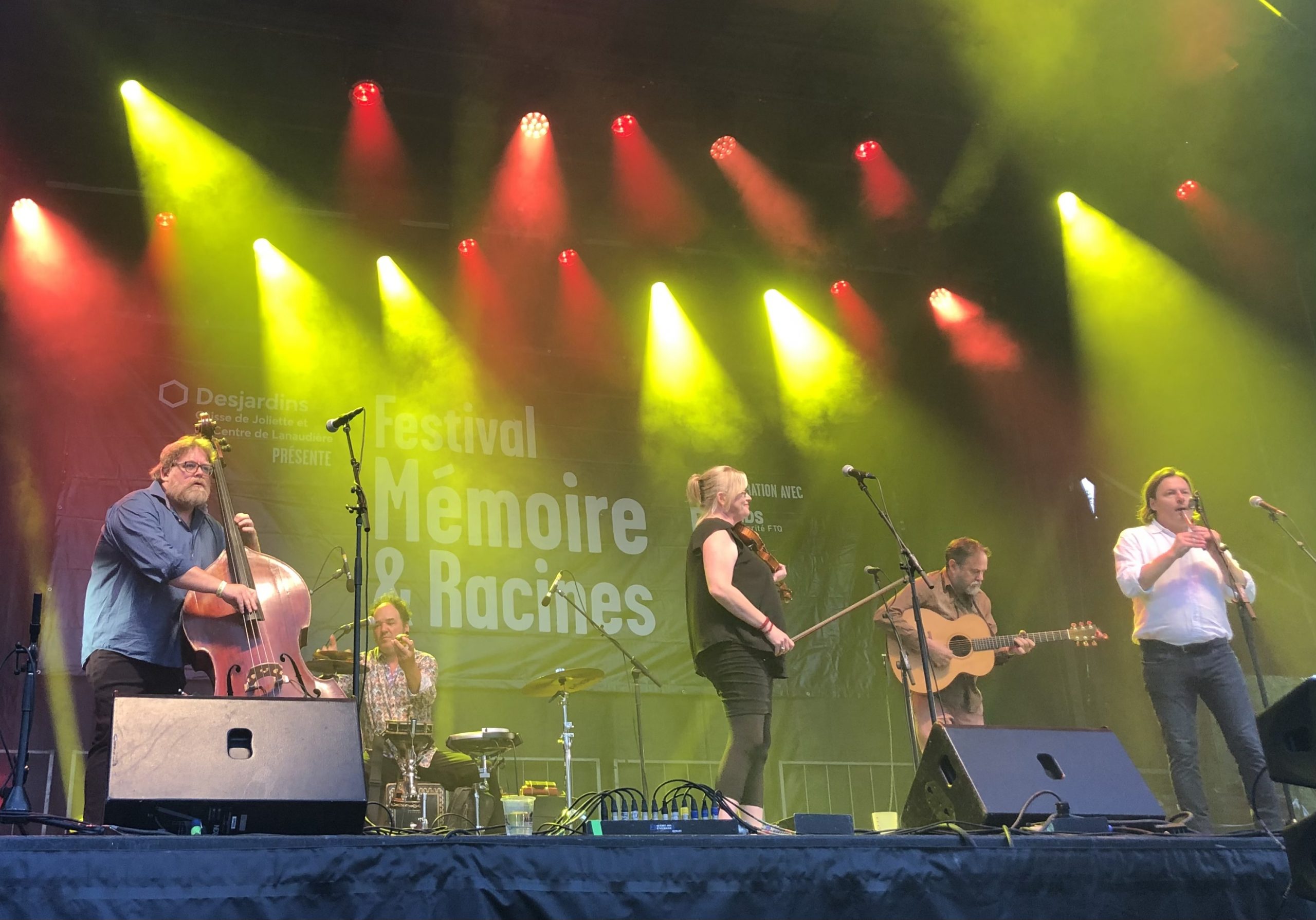 The McDades. Photo by Elizabeth Szekeres.

Jeremiah and the band finished their set with a piece that featured Tuvan throat singing from Mongolia. The crowd on the dance lawn went mad. It became a trance-like happening.

The last act of the evening was Les Grands Hurleurs, with Nicolas Pellerin, Tommy Gaultier, Olivier Rondeau and Simon Lepage. It’s always interesting to see what new music and arrangements are brought to life by experienced and well known musicians.

The band presented music from their latest CD, Ellipse.

The set opened with the foursome playing close together at the front of the stage, amplified by only one set of mics.

This arrangement resulted in a nice acoustic feeling with twin fiddles, guitar and double bass. After that, they reverted to their full amplified format with Simon on electric bass. 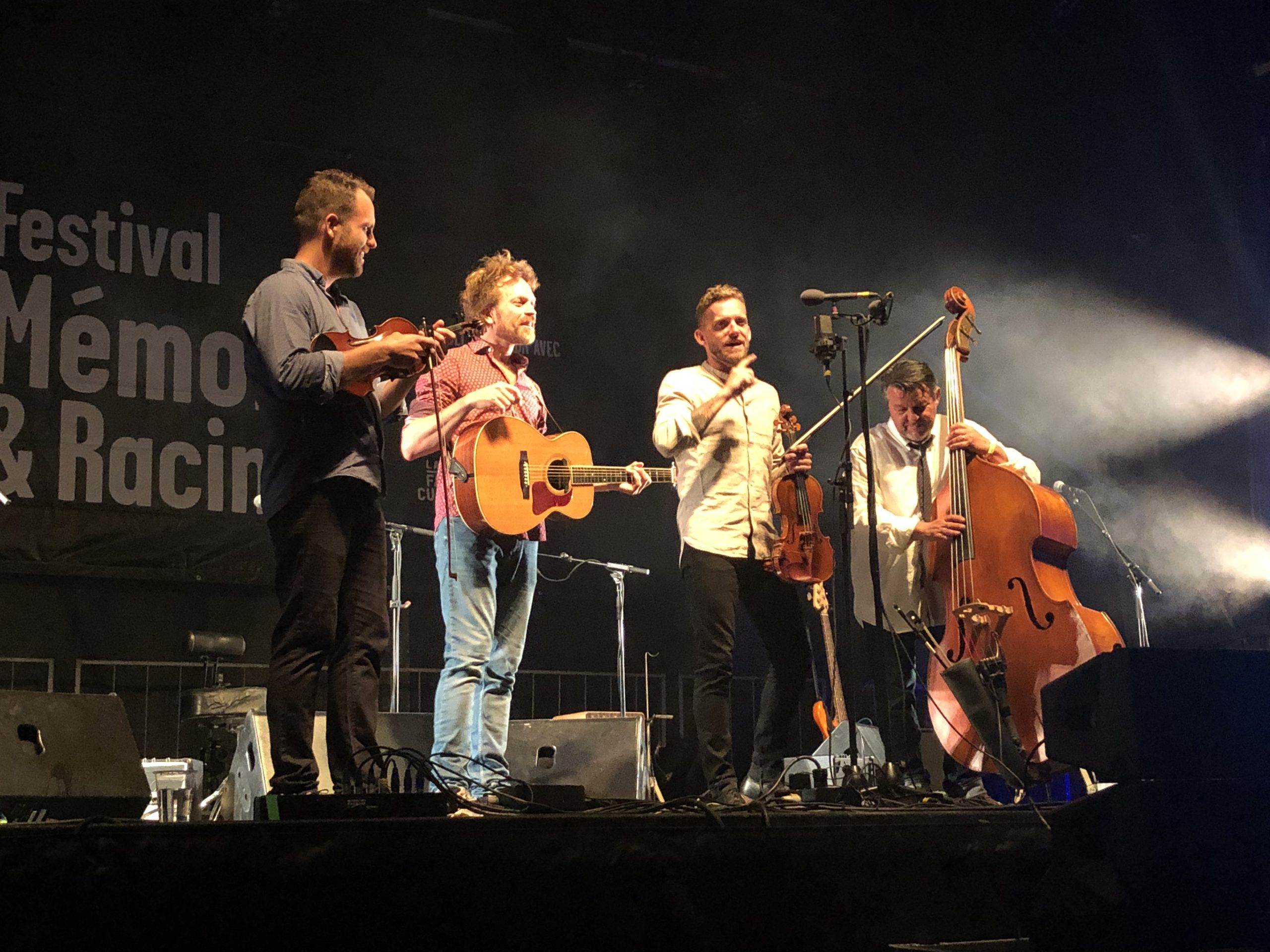 The show was full of evidence that Nicholas Pellerin has been re-inventing both his band and his repertoire over the last couple of years. New band members and new music have resulted in very tight musical relationships, and the fruits of those labours are magnificent. Tommy and Nicholas play their fiddles together as one, they are that in synch.

Two encores happened at the end of the set. For the final one, Nicholas Pellerin had re-visited a fast-paced song from his earlier years. Slowing down “I Leave Tomorrow” turned it into a beautiful love ballad. It was just the right note to end the fabulous re-birth of Festival Mémoire et Racines.

We can’t wait to see what the organizers have in store for us next year!