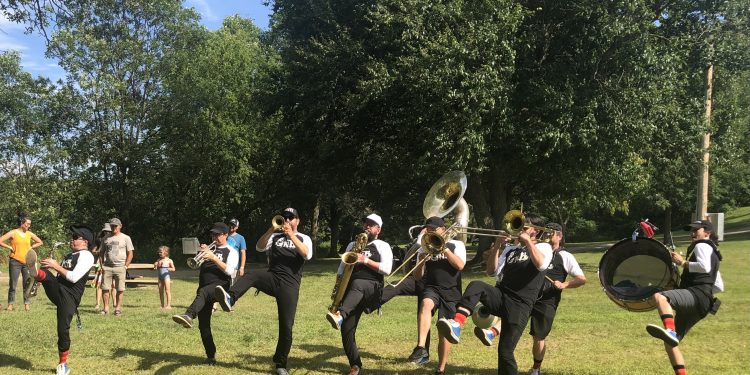 At the wind instruments workshop, we saw Benoit Fortin and Daniel Roy on wooden whistles. Jeremiah McDade played his own compositions on Irish flute and low whistle, with Andy Hillhouse on guitar. Louis-Simon Lemieux and two band members woke up the sleepy morning audience with reels played on harmonicas.

The Himmerland guys showed the tiny Sopranissimo Saxophone, the smallest instrument in the sax family.
Fiachra O’Regan demonstrated uilleann pipes, known as the national pipes of Ireland. Fiachra played a very soulful rendition of the Irish lament “Morning Dew” complete with chords from the resonators built into the length of the instrument. All of the wind instruments were gorgeous to hear, but that one just made us pay immense attention. 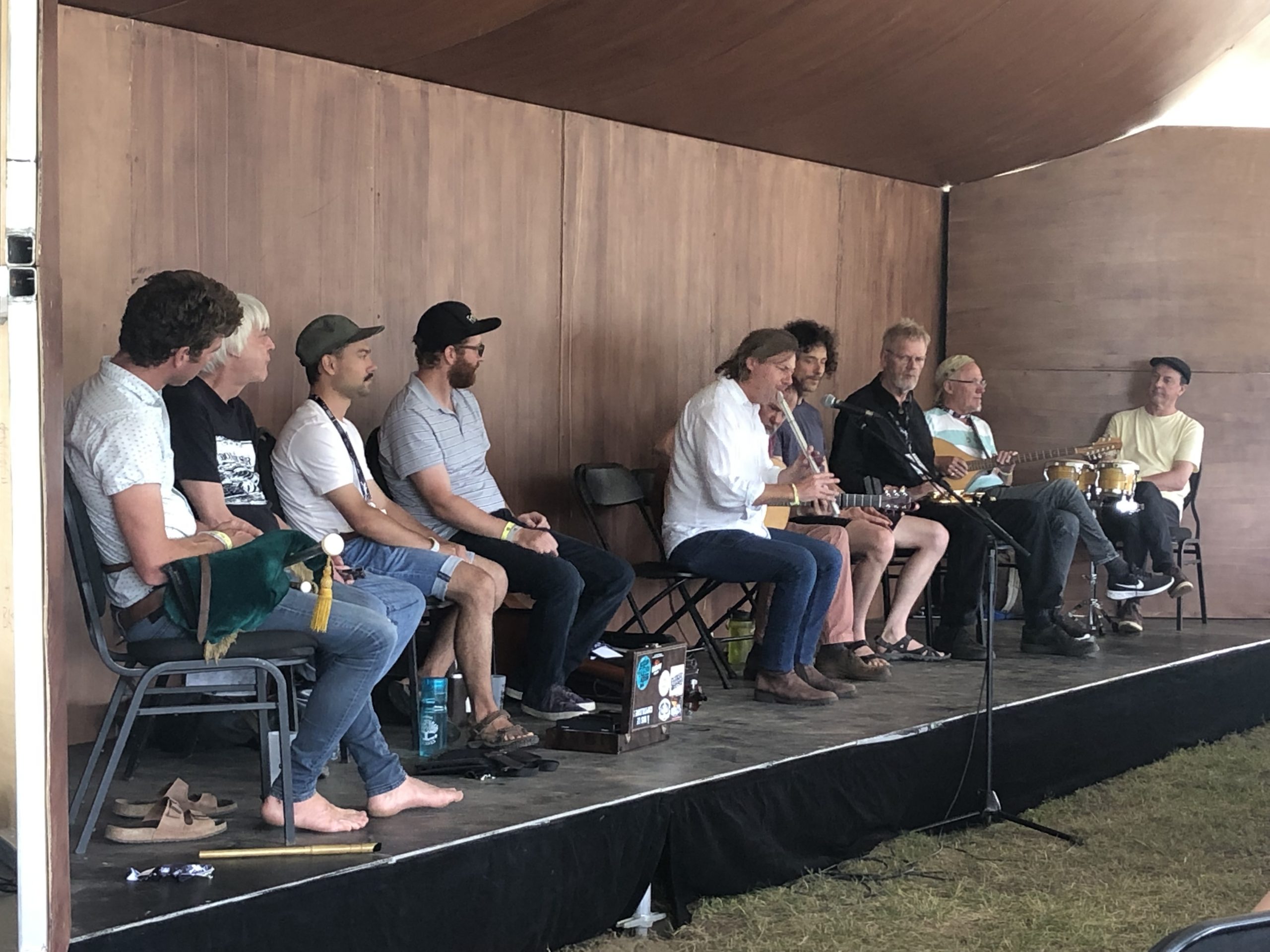 The Atelier ménage à trois featured three mostly trio bands. Grosse Isle, Dâvi Simard, and Les Grands Hurleurs.
Dâvi Simard brought five of his six violins onstage, to have his choice of unusual tunings for the violin, depending on what the music called for.

Grosse Isle led a rousing rendition of Le Talencourt, a great reel from the QueTrad repertoire. And for the workshop finale, the whole gang played a set of fine crooked tunes also from the Québecois repertoire.

The Le Vent du Nord Cabaret Stage performance was packed to the rafters. Again, the band showcased their new music from 20 Printemps, the CD they made for their 20th anniversary celebration. We all had the chance to see these ambassadors of joy making their music for us, right before our eyes in this intimate venue.  Fabulous. 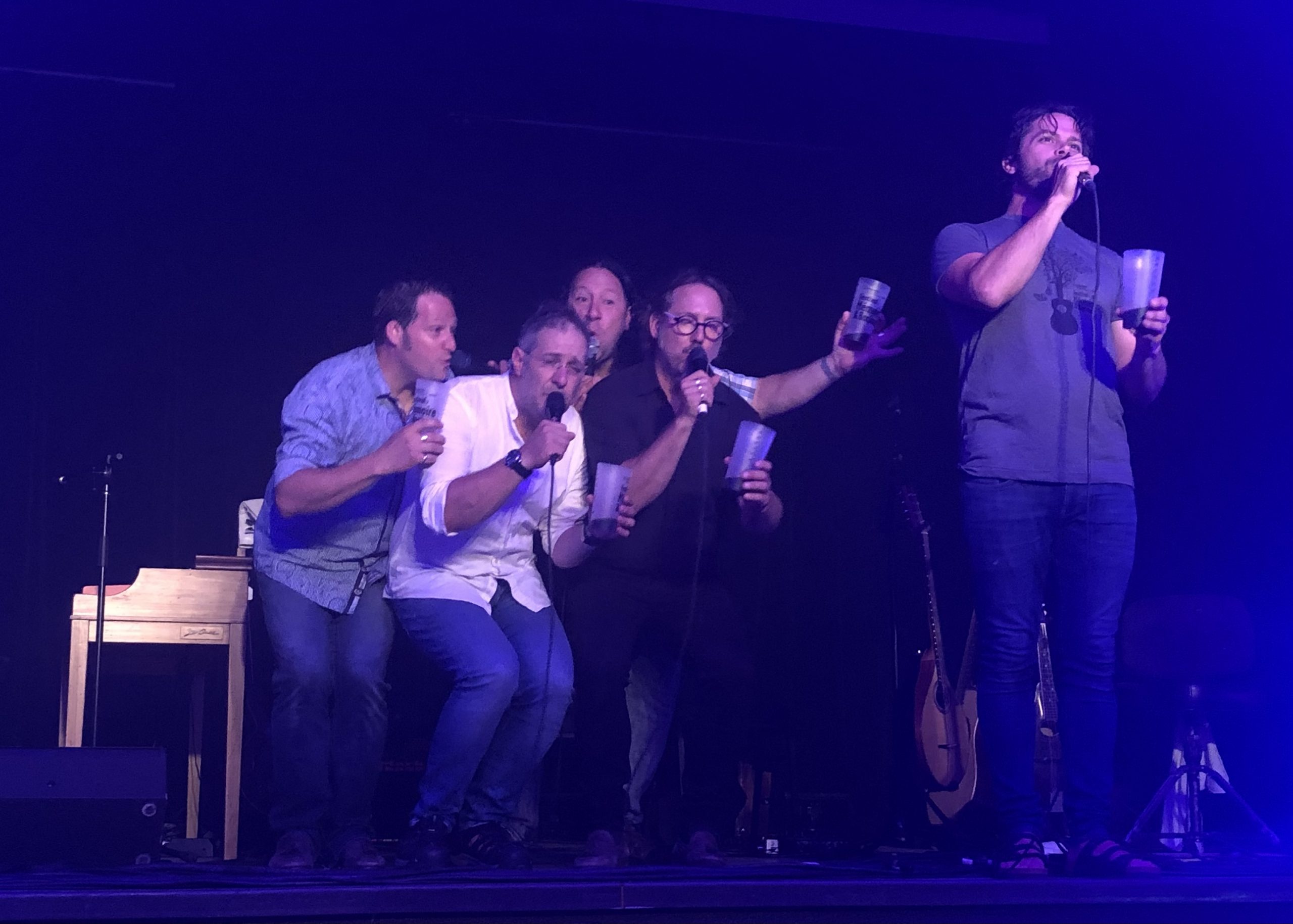 The final concert of the afternoon was a rare appearance by harmonica master Robert Legault et Les Mercenaires de Terroir. With fiddlers Dâvi Simard and Louis-Simon Lemieux, guitarist André Marchand, and harmonica/fiddle player Dávid Brunelle, we heard lots of lively trad tunes on fiddles and multiple harmonicas. “Le Brandy des Vallancourt” wowed the crowd. The Brandy is a reel that is in three, instead of the usual four notes per musical bar. (We are talking musical time signatures here.) Brandys are particular to QueTrad music and always feel astounding and energetic. The crowd sure loved this one.

Robert’s ability to play harmonica and chew gum at the same time was pretty astounding too!

As we left the Cornet Acoustic stage by the river, the Gruv’N Brass ensemble led a parade up the hill to the Agri-Bouffe, where dinner was waiting for many of us.

Dinner had to wait though. We were highly distracted by an informal jam session led by Pascal Gemme of Genticorum. Such is the way of things at Mémoire et Racines.