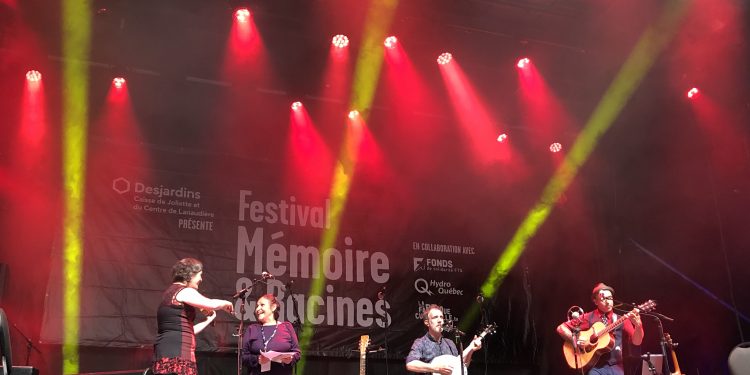 Festival Mémoire et Racines this year is hosting its first full festival since 2019, before the pandemic began.

For the festival opener, again this year, Camp Violon TradQuébecois entertained the growing crowd with tunes the 60-plus students had just mastered at the 15-year-old music camp started by stalwarts of the Québec traditional music scene André Brunet, Eric Beaudry and Stéphanie Lepine. Much fun was had by all.

Himmerland, with members from Scandinavia and Canada, had a lively set of tunes. Unfortunately, they were rained out three quarters of the way through their set. Heavens had opened on an evening when no rain appeared in the forecast. Stage crews were using giant squeegees to clear rain off the stage apron as others hurried to clear gear away from the pooling water. Performances were halted for safety reasons. 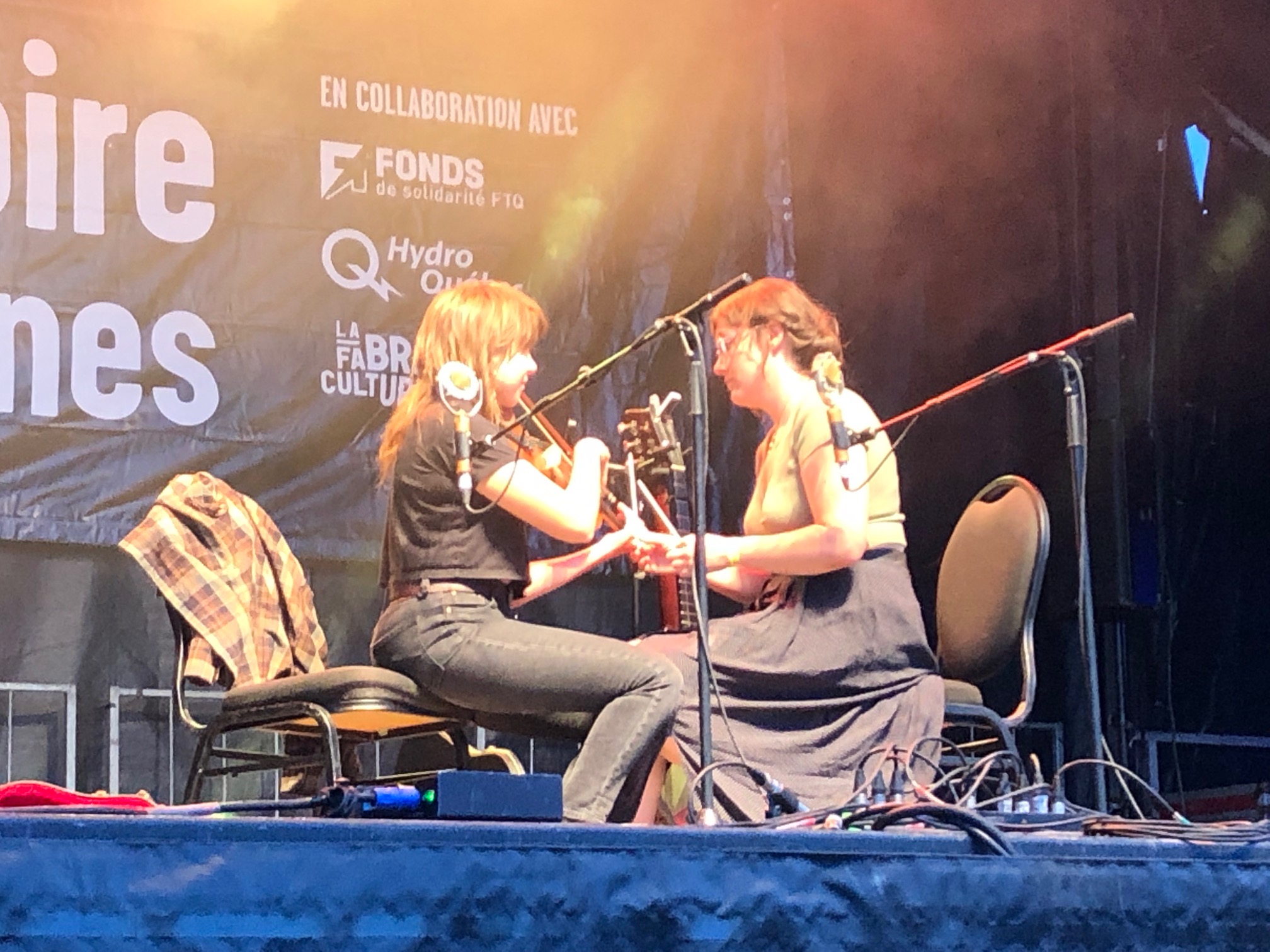 Meanwhile, Dâvi Simard and friends were going crazy making vibrant music for the dance going on inside Centre Bosco. Québecois square dancing is back in full force here this year, delighting the crowds that filled the hall until the wee hours.

After the rain stopped, the main stage continued.

The absolute highlight of the evening was the final act on the Scène Gilles Cantin main stage: Bon Débarras. Trad fiddle music was combined with rap, banjo, guitar, ukulele, jaw harp, and megaphone. There was body percussion that wowed the crowd.

Innu poet Joséphine Bacon joined the band with her vibrant imagery drawn from her life in northeastern Québec. A choral group from Lanaudière region was invited to sing with the band, and ten-year-old Rosalie Desrochers, daughter of fiddler Veronique Plasse and festival AD Jean Desrochers, surprised us with some wonderful stepdancing. 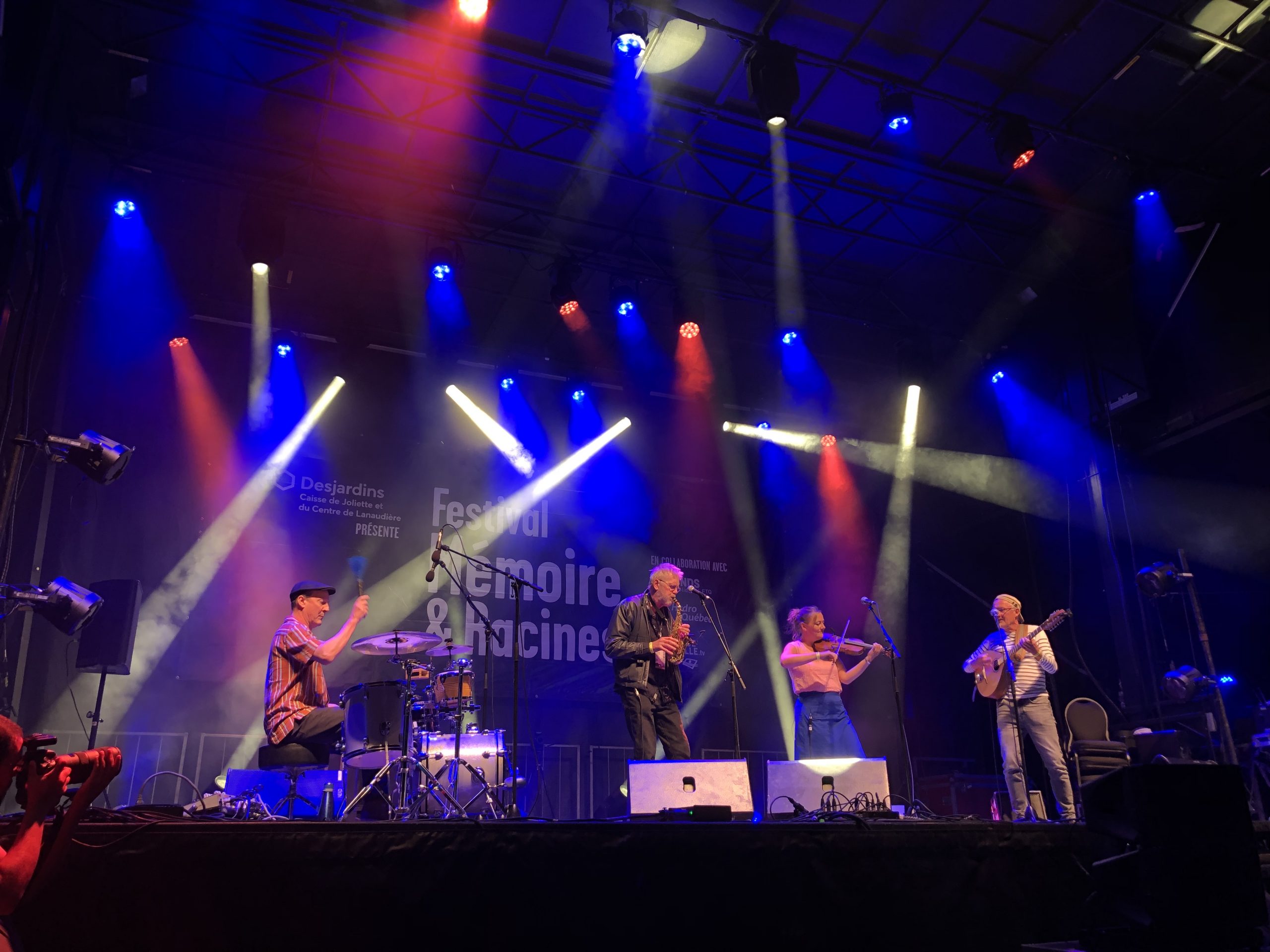 There were wonderful surprises around every corner of this performance. The band’s finale got everyone in the audience on their feet when well-known dance caller and stepdancer Yaelle Azoulay joined them on stage. She choreographed the audience, encouraged square sets to form and soon and had us swinging our neighbours.

The evening ended with the band bringing Joséphine Bacon, in her beautiful ribbon skirt, back on stage to take an extra bow. She deservedly received a standing ovation.

And so concluded the first day of Festival Mémoire et Racines 2022.  Lots to come Saturday and Sunday.

Recap: Sunday at the Hillside Summer ...