Blue Moon Marquee Are Ready to ‘Scream, Holler & Howl’ on their new single 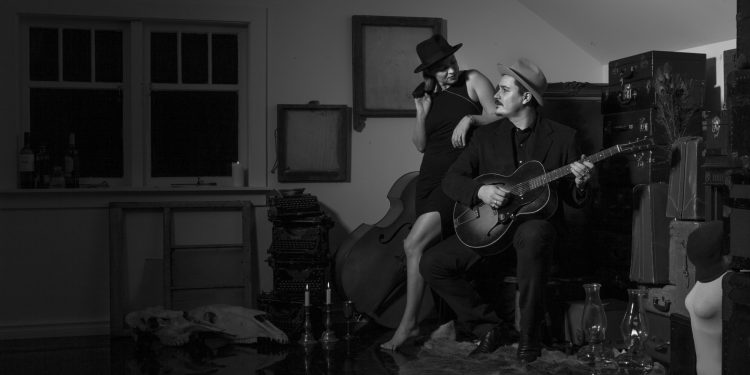 Canadian roots-blues duo Blue Moon Marquee are ready to “Scream, Holler & Howl” with the release of their band new single.

Bursting with a loose, let-it-all-hang-out kind of groove, the song is the opening and title track from their forthcoming album set for release Sept. 9 via their own label, Blue Moon Marquee Music.

“Music is a release, and we encourage expression of the spirit with this tune,” co-front A.W. Cardinal said. “It’s a song to honour what music provides for so many — an escape.”

Recorded live to tape, Scream, Holler & Howl captures the duo’s most sophisticated collection of songs yet — all while blazing forward with a full band featuring some of Canada’s finest veteran players. Recorded at Vancouver, B.C.’s Afterlife Studios and produced by the band with Duke Robillard and Erik Nielsen, both the song and its namesake album shine a bright spotlight on A.W.’s vocals and guitar and Jasmine Colette’s upright bass and vocals alongside guests Darcy Phillips, Jerry Cook, Matt Pease, Paul Pigat, Bonnie Northgraves, and Señor Erik; Duke adds his stellar legendary guitar work on several tracks, too.

The album’s 13 tracks include 11 original songs plus two distinctive takes on songs written by the legendary Lonnie Johnson: “Another Night to Cry” and “Long Black Train.”

Born in Alberta, both A.W. and Jasmine played in punk, metal, and rock bands. Leaving home at a young age, they both spent years traveling on their own, working a variety of jobs and touring with different acts. At one point, Jasmine was hitchhiking throughout North America performing vaudeville with an act that involved spinning a hula hoop, skateboarding, and playing trombone simultaneously, while A.W. was living in New York City working as a bike mechanic and performing at open mics every night.

It was in 2012 that they came together in Vancouver to record A.W.’s original material for his album, Stainless Steel Heart; a mutual old friend was engineering the project, and they connected deeply on their taste and obsession over music.

With their distinct energy and style, this acclaimed duo writes and perform original compositions influenced by anything that swings, jumps, or grooves. Carving a path through blues, jazz, jump jive, folk, country, swing, and Indigenous soul with an authentic spirit, their sound does not idle easily in one certain category. Also known as “Badlands Jass,” Jasmine not only commands the upright bass but also brings the rhythm with her feet on a custom foot drum kit — all while singing in her signature honey-dipped tones — while A.W.’s distinctive and soulful vocals barrel out like a raging bull and his guitar crackles with the swinging energy of jazz-tinged blues.

Their gift is bringing all these elements together without anything sounding out of step. They collect the roots and smoothly braid them with lyrics that often touch on the underbelly of society, woven with elements of Indigenous storytelling and poetic cadence.