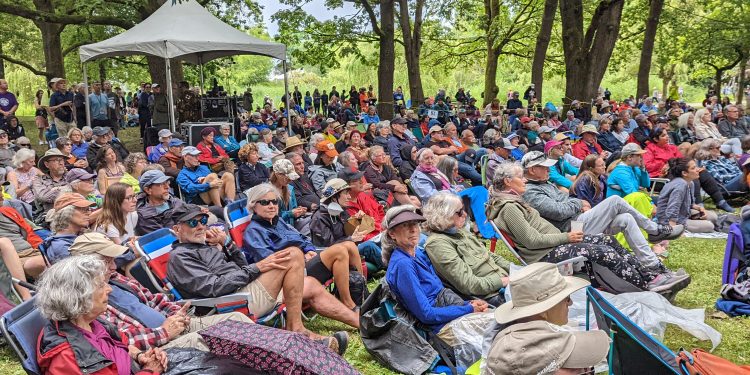 Day two of the Vancouver Folk Music Festival, and the weather threatened rain but didn’t ever follow through with more than a sprinkle. While we were denied the bright blue skies that make for envy-worthy sea to sky mountain view posts, we were also spared the intense heat and humidity of so many summer gatherings. Not sad about that.

On the East Stage, Beledrone answered the question we didn’t know was asked: What do Scotland and Bali have to do with each other? Otherworldly and eccentric, with haunting vocal harmonies, the act was a real treat.

“What’s In a Name” was the workshop held on the East Stage – formerly known as Stage 3 – hosted by Suzie Ungerleider, formerly known as Oh Susanna, with Housewife, formerly known as Moscow Apartment, and Quote The Raven, who cycled through many inappropriate metal band sounding monikers. They each represented with great talent and story-telling. 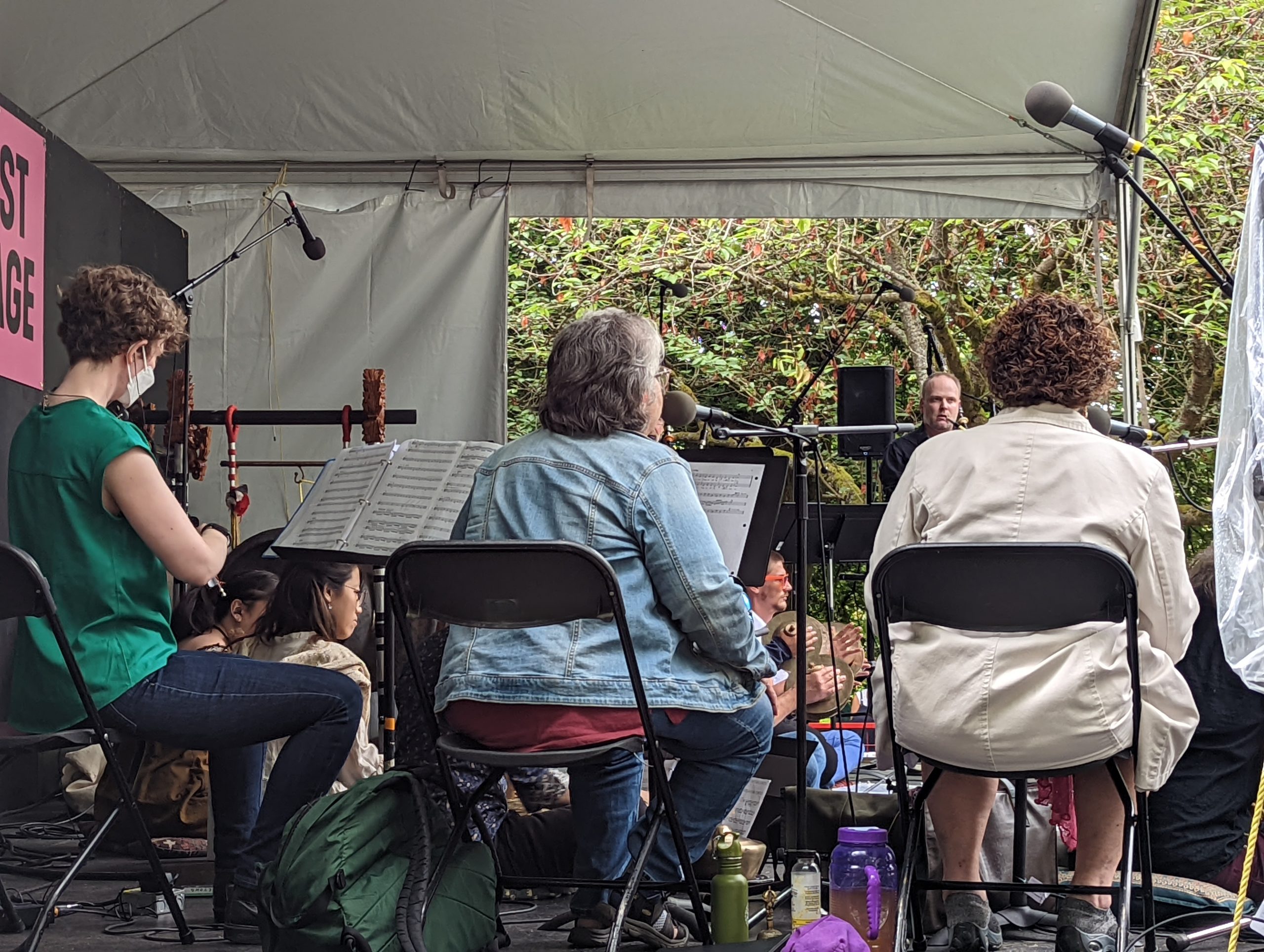 Bella White covered Lucinda Williams “Concrete and Barbwire” but vocally recalled Emmylou Harris. In her floral frock and ginger tresses, she and her band brought the old fashioned country class.

We missed Haley Heynderickx’s concert, but we did catch her tweener set, where Hurray for the Riff Raff or The Weather Station were brought to mind.

Ford Pier was his usual eclectic dynamic self, with demanding yet rewarding lyrics. This silver fox only improves with age – but will he ever mellow?

Swing Time with Lache Cercel Roma Jazz and Christine Tassan et Les Imposteurs was a rousing soundtrack for the beer tent crowd. The West stage is uniquely situated in front of a captive and appreciative audience. Though not all artists can cut through the chatter, they certainly did. 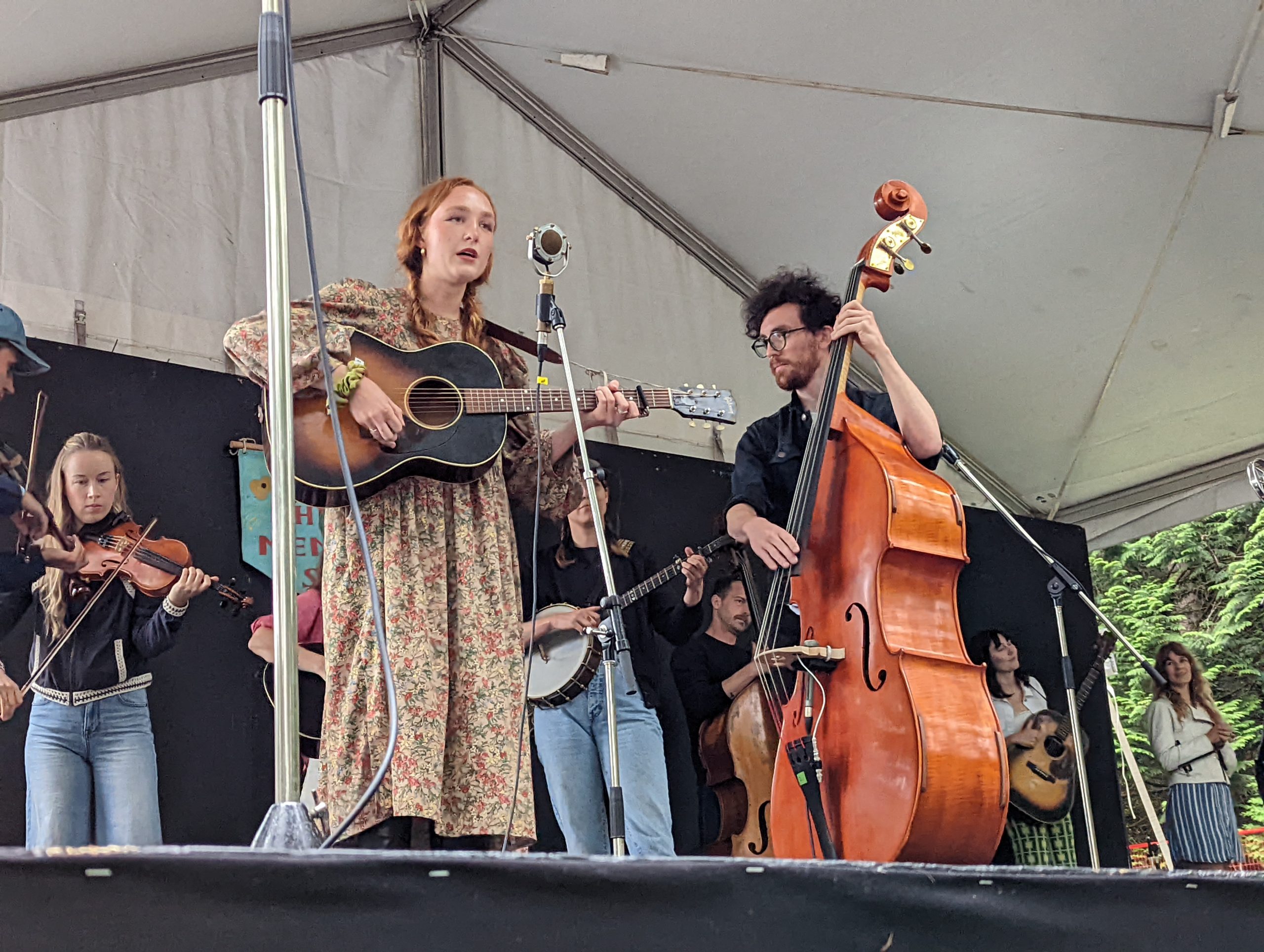 One absolutely EPIC workshop featured members of SINNOI, VILDÁ and Witch Prophet. It was cultural crossover with Ethiopian/Eritrean/Korean/Finnish vocal adventures and musical magic. Just wow. We will be hearing more and more from SINNOI, and we do hope they collaborate with VILDÁ in future. Toronto based, singer-songwriter Ayo Leilani of Witch Prophet seemed a little insecure about being a self-taught musician who couldn’t call out chords for the others to join in on (though they did). Considering how many top-notch artists (such as Buffy Sainte-Marie) can’t read music either, that and her deliciously rich voice and deep tunes, should leave her feeling as satisfied with her output as the audience clearly was.

We were sad to have missed the Golden White Highway workshop with Molly Tuttle, Bella White and Stringband Sundae, but people gotta eat.

One thing we admire most about the Vancouver folk fest is its efforts towards inclusiveness. Some stages included a gifted sign language interpreter, who even signed requests to the sound man for more guitar from the ever chatty-n-charming Manitoba folk duo Fortune Block. This new collaboration between Richard Inman and Amber Nielson (Sweet Alibi) showcases some pretty compelling songwriting and fine vocals. 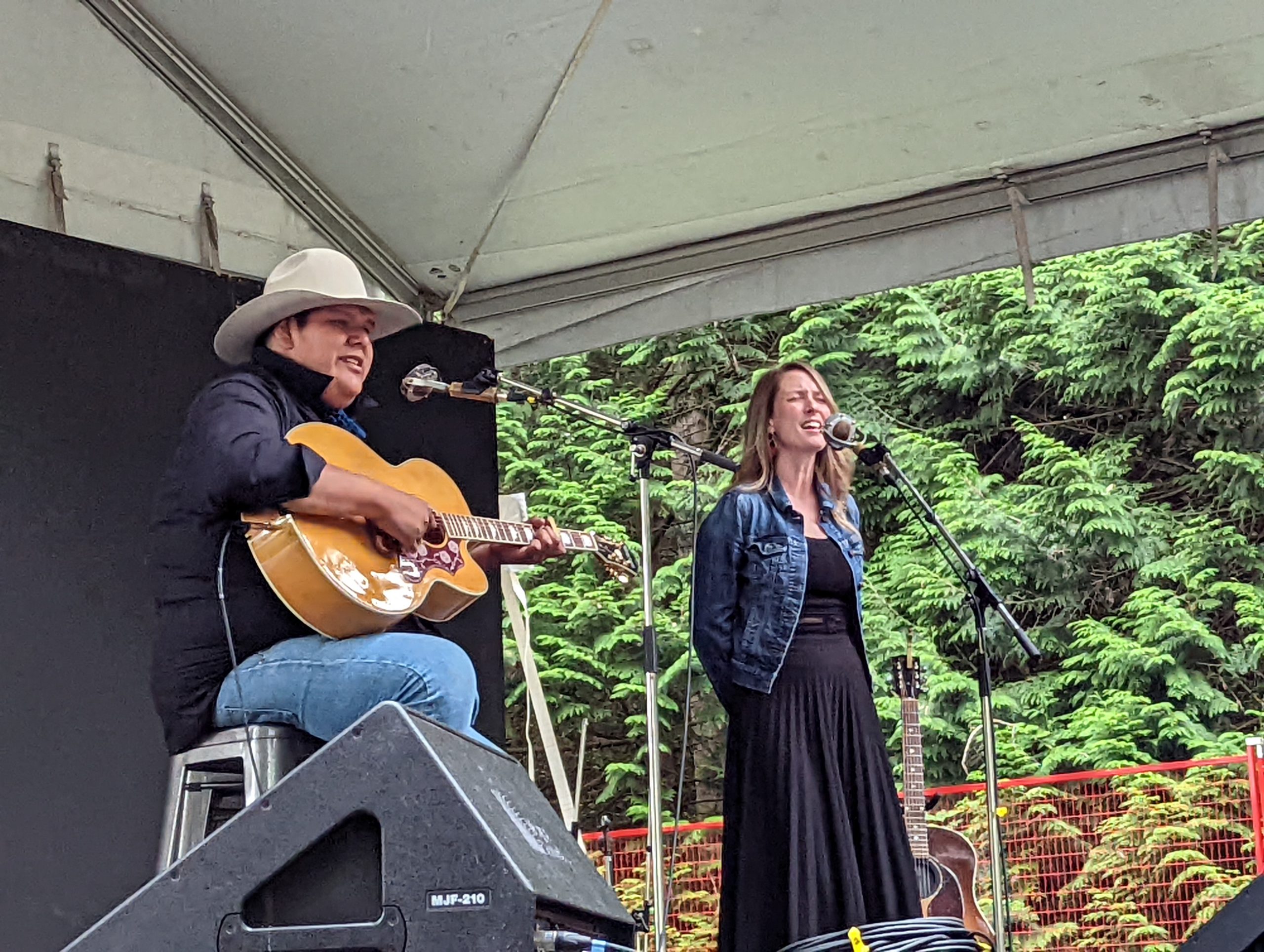 Speaking of songwriters, PEI’s Lennie Gallant earns his reputation as one of Canada’s best story-telling troubadours. He began his set on the South Stage with an earnest love song, “Pieces of You,” and tales of getting his CD on the space station. He also told of how, with a ghost-themed song, he shut down the sound on the main stage the last time he was here. Partners in life and music Lennie and multi-instrumentalist Patricia Richard also make up the French duo Sirène et Matelot, which translates to the siren and the sailor. We were pleasantly surprised at just how much we enjoyed their Acadian ways on “Trois hommes en noir” and other francophone tunes from their recent duo debut. It is easy to understand why they are a festival and house concert circuit favourite.

Parents held their little ones extra close while Suzie Ungerleider crooned her tune “Summer Baby,” with pin-drop attention under the trees. Joined by her husband, Cam Giroux, on drums and her “life coach,” Paul Rigby, on guitar, she remains one of the hardest working mamas on the scene. We have been fans of Vancouver’s homecoming queen since her Johnstown record back when we were all living in Toronto and could not be more delighted with her continued success. 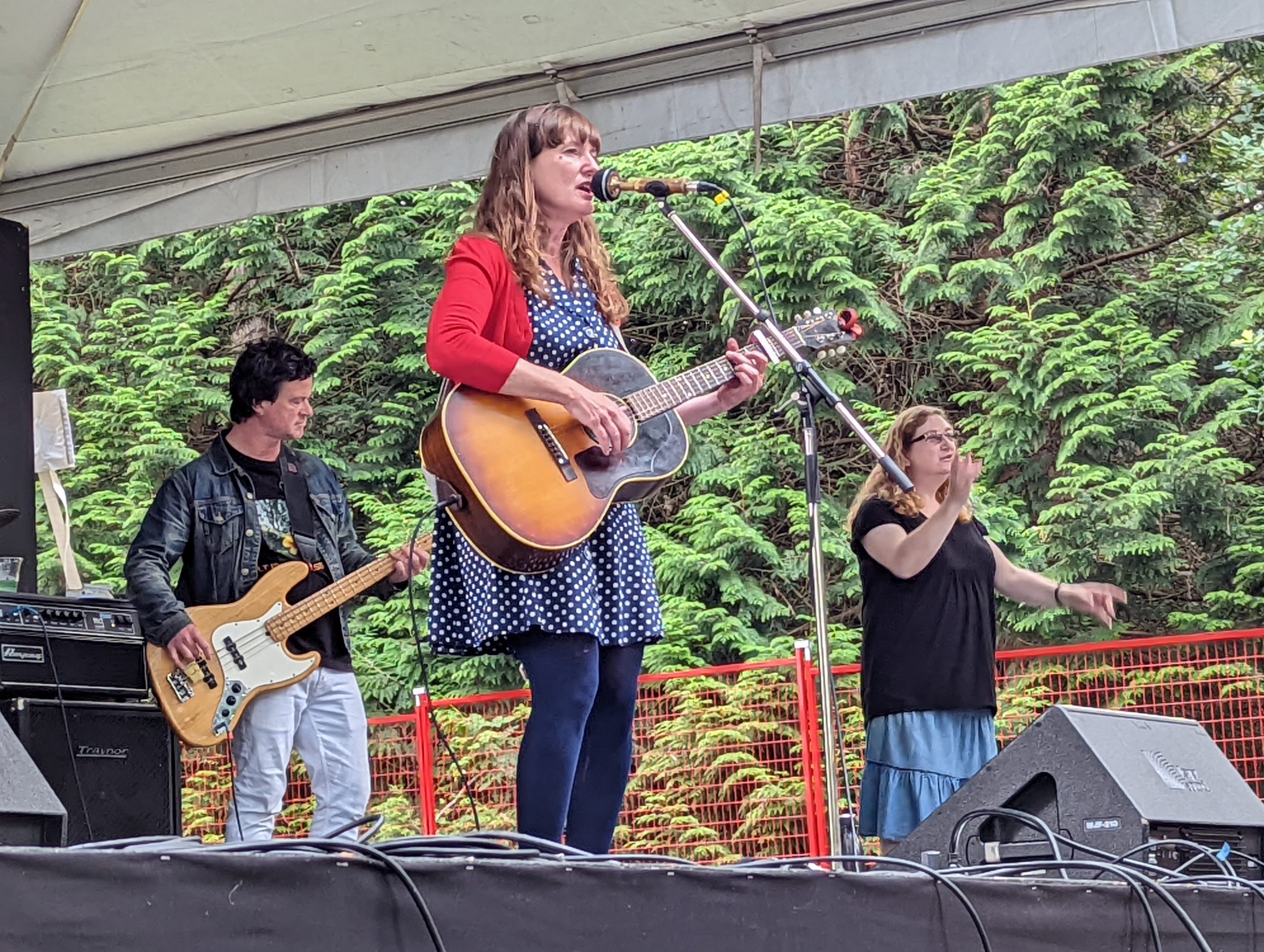 Molly Tuttle & her Golden Highway band met all expectations, and that’s saying something considering the buzz around her. She has such a tight band, and they were so very entertaining, they even managed to get the crowd do-si-doing. And questioning how we say “Vangcouver” – if in fact we do. We are all in doubt now. Thanks Molly! Do not miss this incredible virtuosic multi-instrumentalist and singer-songwriter if you get the chance.

Every festival must have its high priestess. And for the Vancouver folk fest in 2022, Allison Russell was all of that tonight, playing banjo and clarinet in a sequin dress of interstellar beauty. Nineteen years ago, former folk fest AD Dugg Simpson booked Allison as a member of Po Girl, and this return under her own name felt like a homecoming of the heart. From her early days escaping unthinkable trouble at home, she was embraced by her auntie’s musical crew at this very festival. She also worked the front lines in the Downtown Eastside at the Portland Hotel, and now Allison quite rightly considers herself a folk music lifer, and we believe, an East Van treasure if there ever was one. Tears rolled down many faces as she recounted her struggles to exist, the ongoing assault on human rights, the missing and the murdered. Yet she lifted us all back up with her pandemic-inspired mantra, “We are not alone. We are not what we’ve lost. We are more than the sum of our scars.” Joined by an all femme band so glued together in their musicality and intensity, she would have blown the roof off the place had there been one. New Orleans guitarist Joy Clark seemed to be enjoying her first ever visit to Canada, and if you are looking for an invitation to commune with the goddesses, then do check out her new single “Good Thing” on Bandcamp. Closing off this spiritually rewarding and rather healing set with a reprise of her unforgettable anthem, “Fourth Day Prayer,” Allison left us needing to sit with all that at home with our feelings, so we left as the New Pornographers were closing the show for the still-excitable main stage audience. 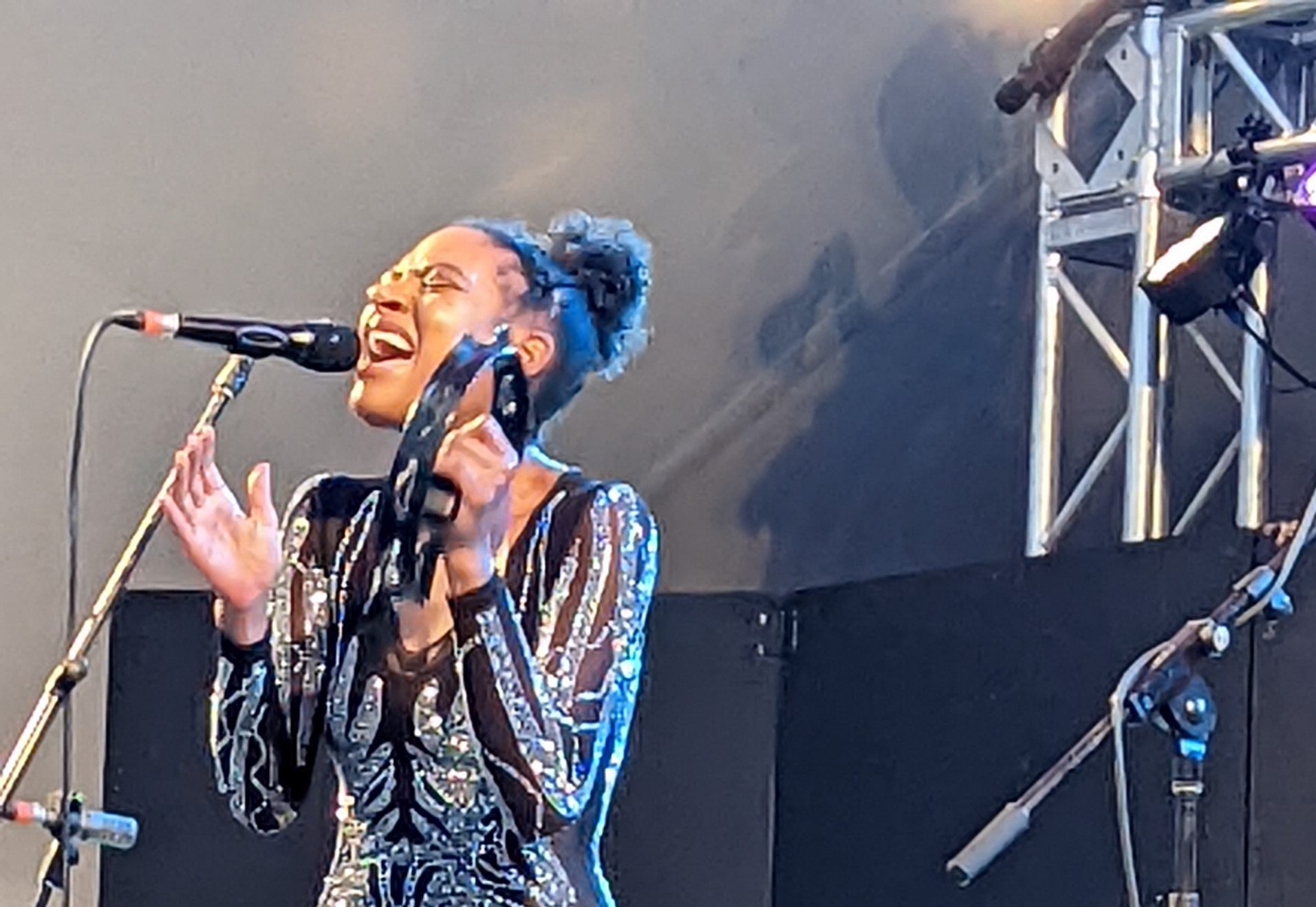