Dispatches from the 2022 Vancouver Folk Music Festival: day one (Friday) 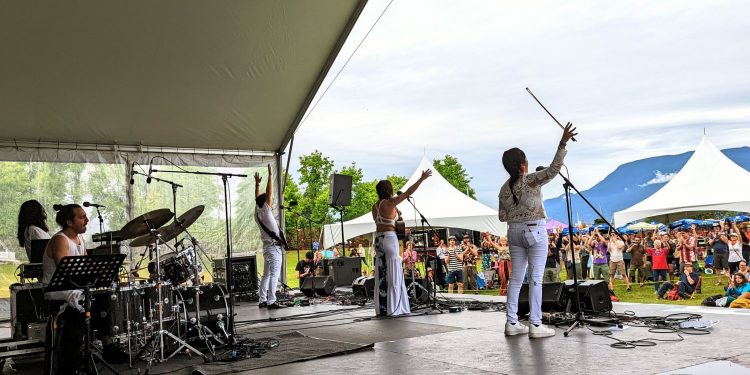 While the rest of us (ok, maybe just us) grew in size under COVID, the Vancouver Folk Music Festival slimmed itself down, losing a couple of stages, one gate, and the freestyle market outside of those gates. And that turned out to be a good thing, as many were nervous to jump back into crowded spaces despite the government go-ahead to gather without restrictions (though they did take extra precautions with backstage to ensure artist safety). This made the whole event a smoother, kinder, gentler re-entry to live music on a large scale. Four stages is plenty and easier to navigate without too much FOMO. Rain or shine is the dealio here, and despite grey skies and some refreshing raindrops, Chile’s Golosa La Orquesta brought the sun to the West Stage. Experimental sounds, frenzied guitars, octave violins, traditional accordion mixed with midi keyboards all fused together to make an undeniably danceable start to the fest.

We witnessed all this from the comfort of the beer garden, which we can tell you is still a big deal at a festival that was dry from its inception up until 2009. Folks are still talking about it. A much-needed cash infusion, this game changer thankfully hasn’t brought the debauchery that some feared, though they could use a few more umbrellas for those long hot days if we are to avoid making lobsters of tender west coast flesh. The rain (if you can call it that) thankfully did not last, leaving only cool breezes in its wake. Don’t let the weatherman discourage you, as a tiny sprinkle in the morning will just leave everything a little fresher as the day heats up.

Housewife. Photo by Reid Jamieson and Carolyn Mill.Over at the East Stage, things took a decidedly indie turn with the award-winning duo Housewife (formerly Moscow Apartment). Just out of their teens, queer singer-songwriters Brighid Fry and Pascale Padilla rocked out with a Liz Phair meets Pavement vibe, infectious pop rock with a side order of angst. Brighid told us how she first came to the fest as a baby — and with any luck will finish as an elder. They capped off their set with their new single, “Patrick Bateman” and reminded us that they had some pink t-shirts to match that tune if you, like many, have moved past collecting music in its physical form. Kids still gotta eat, so get thee to the merch tent!

We bumped into Vancouver art rocker Ford Pier at side stage, looking dapper as ever. When asked what he was looking forward to this weekend he chose Korea’s SINNOI, and was particularly keen to see Jung-seok Lee on the traditional string instrument geomungo. Combining ancient Korean vocal styles with electronics and jazz, they create something completely new in the process. Singer Bora Kim founded the band with Lee Won-sool on double bass, incorporating sound artist Godam for something truly unique. The name Sinnoi is a variation on sinawi, the word that refers to the oldest traditional shaman music. We expect to hear more from these talented artists. 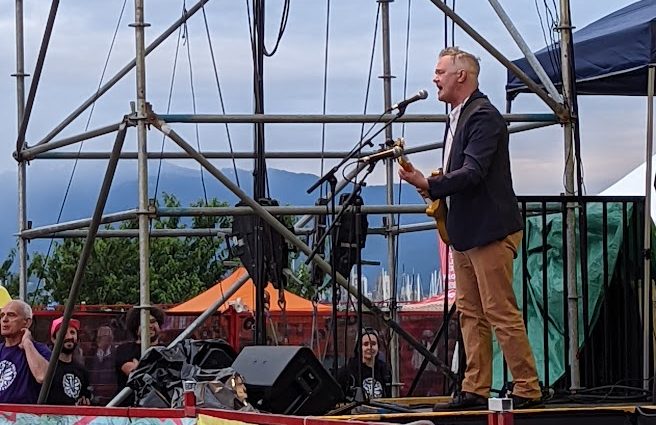 Back on the main stage, Newfoundland folk duo Quote the Raven charmed the tie-dyed pants off the audience with their tweener set of precious harmonies and tender tunes. They even managed a sing-along with their sweet song “Golden Hour,” written in a snow storm, they say — not something too many Vancouver artists can boast. 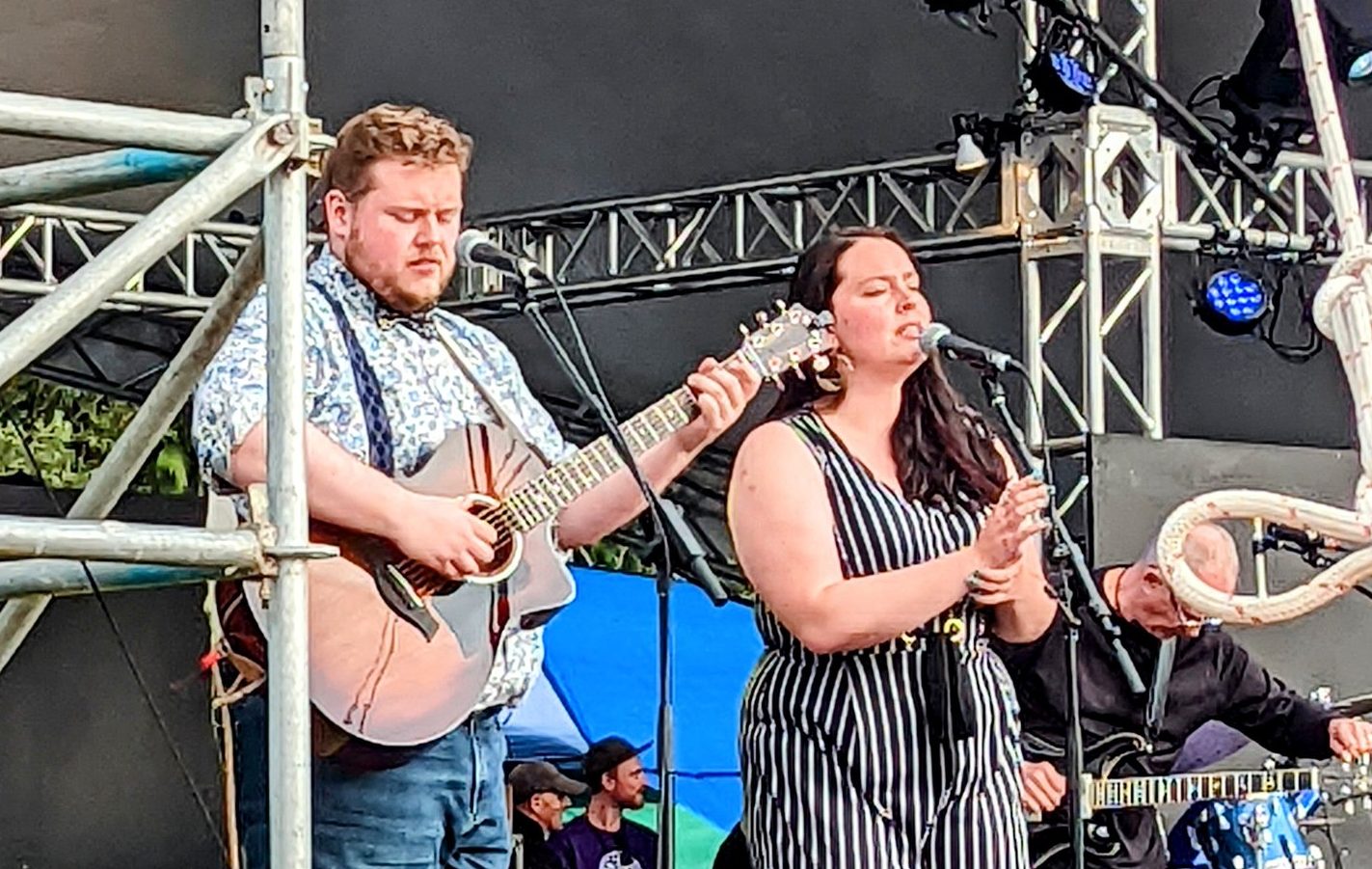 Quote the Raven. Photo by Reid Jamieson and Carolyn Mill.

Speaking of winter, Winnipeg’s The Bros. Landreth then provided a chill groove, giving this ex-Toronto gal shades of Pete Elkas…and that’s a good thing! Next up was Robben Ford with a guitar-heavy blues set. He attempted a handful of jokes that were admittedly less well received than the tunes.

A Friday night highlight was certainly East Vancouver’s own Frazey Ford. Performing on both keyboard and guitar, she was accompanied by the multi-talented textile artist Caroline Ballhorn on background vocals, and also a gaggle of locals known as the Kingsgate Choir flanking both sides of the stage. She gave a shout out to her mama, who was in attendance, for the voice. And as usual, her outfit really could have done the show all on its own. 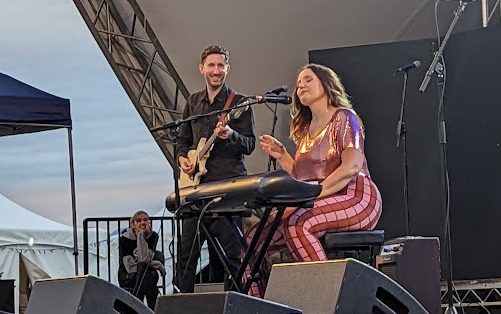 To cap a perfect first night of folk fest, we watched the international treasure Taj Mahal. Mahal has done much to reshape the definition and scope of blues music over the course of his more than 50-year career by fusing it with non-traditional forms, including sounds from the Caribbean, Africa, India, and the South Pacific. Pretty much everyone we spoke to was looking forward to this musical treat, and he had us all in the palm of his flat-picking hand within mere minutes. Given that he turned 80 this year, folks knew not to take this multi-talented showman for granted. It was a true pleasure to experience this level of entertainment after two years without our beloved fest, and a joyous end to the first day. Looking forward to tomorrow’s magical lineup! 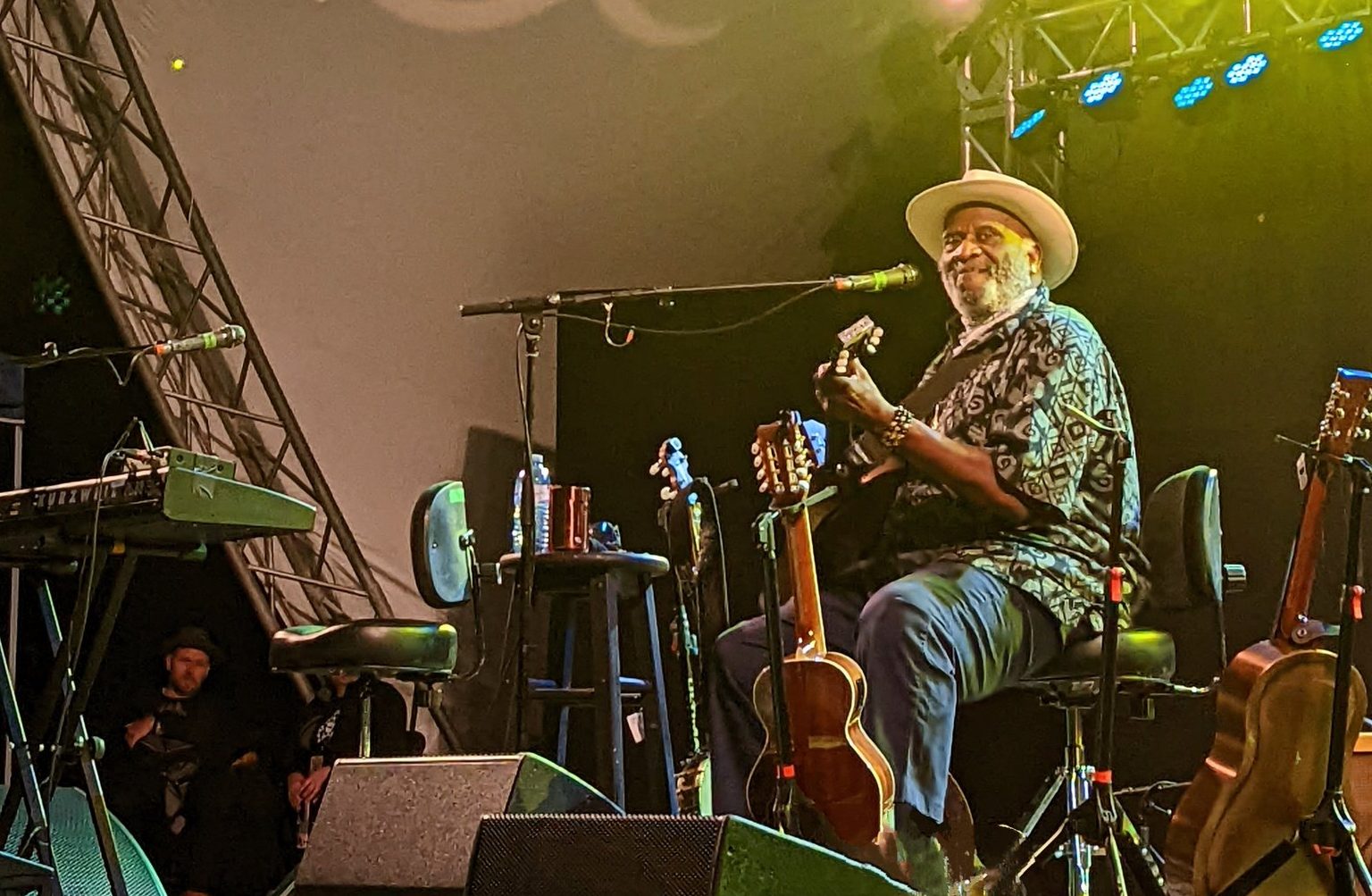