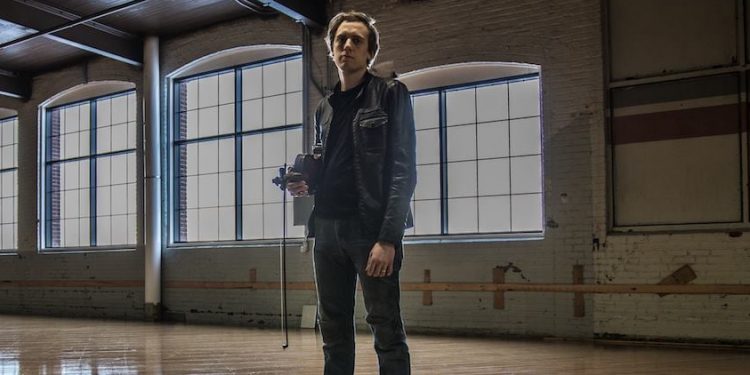 In a bold move, Montréal singer-songwriter/fiddler Aleksi Campagne has released a debut album, For The Giving/Sans Rien Donner, that is a two-disc set of 10 songs, sung in English on one disc and then in French on the second disc. The reason for doing it this way has a lot to do with how Aleksi was raised.

“I grew up in a bilingual house,” he explained at the Mariposa Folk Festival. “My mother is folk singer Connie Kaldor, and she sings and writes in English. My dad, Paul Campagne, was in the band Hart Rouge, and they sang in French, so I grew up with both.”

Recording in English and French allows Aleksi to sing all of the songs no matter where he performs in Canada. The challenge was translating the lyrics from one language to the other. A phrase in English might take longer to sing in French and vice versa.

“It’s very very difficult to translate things. I’m really proud at how it turned out.”

For help, he turned to his family members who have years of experience to draw upon.

“I worked with my aunt, Michelle Campagne, to work through the translations,” he said. “We were able to tweak them and be true to the essence because it’s not a direct translation. That wouldn’t work.”

In the end, there are phrases Aleksi prefers in one language over the other, so when you see him in concert he might switch up the language mid-song because of that.

As with every album released these days, For The Giving/Sans Rien Donner was recorded during the pandemic. Aleksi took a different approach to putting it together with producer Will Owen Bennett.

“When it came time to do the recording, we all quarantined and then lived in my parent’s home studio for two months and worked through the songs one step at a time.”

Having folk singers for parents might give you an early insight into the inner workings of melody and lyrics but Aleksi Campagne sought further instruction in other genres of music.

“I started with classical violin and them I studied jazz violin in Paris,” he explained. “There’s a jazz violinist called Didier Lockwood who had a school in Paris. I spent two years there, and then I did some studying at McGill.”

Adding the classical and jazz instruction to his folk foundation has given Aleksi an extensive bag of tricks to call upon when composing songs and tunes.

“Studying jazz improvisation opened up my harmonic understanding,” he said. “The classical training really helped my technique to deal with this difficult instrument, the violin. When I did classical music school at École du musique Vincent-d’Indy, which is pre-university, we did solfège as well, which was good for sight-singing.”

Solfège is the application of the sol-fa syllables to a musical scale or melody.

“All of these things really help you understand what you’re hearing,” he said. “It gives you a language to communicate more efficiently with your musicians. I’m super thankful for all the training I got. You have this bag of tools, and then you try to do your own thing with it and try to create something new.”

While there are physical copies of For The Giving/Sans Rien Donner available, Aleksi is releasing the music by email.

“We’re working on some online stuff throughout the year,” he said. “We’re launching a single every two weeks by email so people can follow us there. We’re going to be doing some shows and some conferences to get back out there and start playing again.”

For more information on Aleksi Campagne and For The Giving/Sans Riens Donner go to aleksicampagne.com.