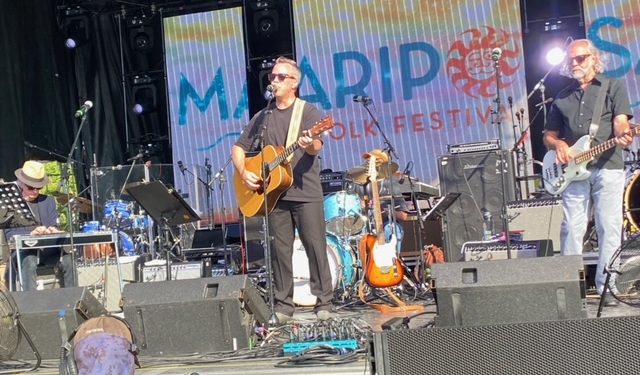 We started Day Three with a workshop calle We’ve Got Nothing But Love to Prove at the Estelle Klein Stage. It featured Dala, Harrow Fair, Leyla McCalla, and Allison Russell – who was slightly delayed by the sound-check for her Mainstage performance that night. Leyla, who also makes music with Allison and Rihannon Giddens in the Our Native Daughters project, opened solo, with the sweet, gently swaying “Vini Wè,” a song to greet the rising sun of a new day with one’s beloved. It’s part of her next album, which is centred around the history of a politically active radio station in Haiti, through the eyes of a lifelong couple who meet there. (Watch for the Broadway show… eventually.) The duo Harrow Fair, backed by their band, took us in the opposite direction, with a dark, minor-key wail, “Told a Lie to My Heart.” While Dala looked at love through the lens of family, Allison Russell’s song “Persephone,” performed with a few members of her band, paid musical tribute to her first love, at 15 years old – one that truly, irrevocably changed her life for the better. 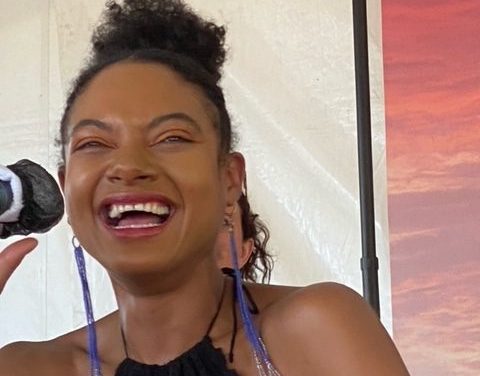 Then it was off to the Nobody Said It Was Going to Be Easy workshop at the Bohemian Embassy Stage, featuring Alysha Brilla, Reuben and The Dark, and Logan Staats with his sister Layla Staats. Reuben and The Dark kicked it off with some atmospheric, treated-and-textured electric guitar music, with strong vocals front and centre. “You know my soul,” Reuben sang, walking out into the crowd to get closer to fans. The Staats, of the Mohawk Turtle Clan, introduced themselves in Mohawk then taught us the word for “love” in their language: Konnorónhkhwa (pronounced gaw-naw-ROON-kwah). They explained how they had to reclaim their language, which was taken from them, and played “Red Road.” Logan’s voice, ranging from a tremulous whisper to a throaty growl, was perfectly balanced with Layla’s familial harmonies, as they sang “Give me back my love. I think she’s had enough.” It was powerful, and moving. Alysha Brilla was her usual brilliant self, and on this occasion sang her consistent opening song, “I Will Run To Your Rescue” with one of her three sisters. More superb familial harmonies. 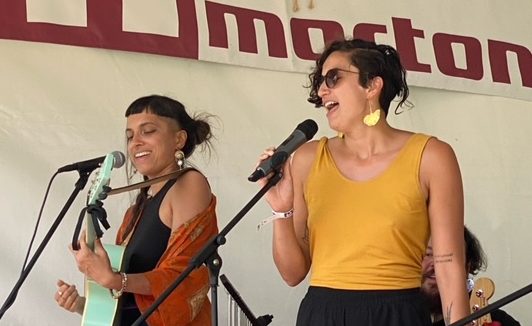 After a bit of a hike to the Ruth Stage, we caught Jason Wilber, who learned a thing or two about songwriting by playing guitar on tour with John Prine for almost 25 years. He sang a witty song about a serious subject, “The Singularity,” casting a wry but concerned eye at the growth of artificial intelligence and what the ultimate effect might be on humanity. He played “Watching Picasso,” a beautifully written piece about seeing a genius of a songwriter being largely ignored at the small Ship Inn venue in Saint John’s, only revealing in the last line that it was the late, great Ron Hynes. After the song, Jason said that when Ron first heard it, he said, “You know you’re getting old when they start writing songs about you.” His closing song, “Ghost Light,” about the last light to be turned off in a theatre each night, was as haunting as the title suggests it ought to be. Always a good thing to discover a great songwriter. 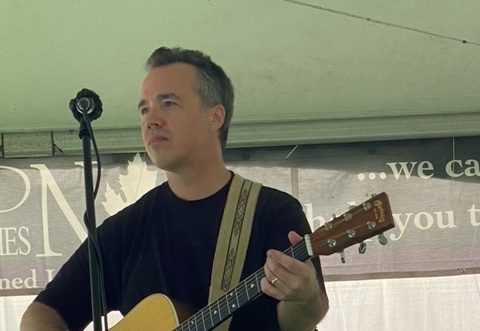 Lido Pimienta opened the Mainstage in a burst of colour (a canary-yellow dress and a mic stand draped with red flowers) and a colourful sound that combined the cumbia rhythms of her native Colombia with modern textures and a revolutionary’s attitude. With vocals alternating between a punky squawk, an earthy growl, and a soft cooing, the 2017 Polaris Prize Winner sang songs like “Aqua,” about how water means life, shouting, “Wouldn’t it be beautiful not to have to boil water to drink it, like we have to right here in Canada?” “We” being First Nations people. In a clever, boldly hilarious skewering of anti-abortion sentiment – taking the idea that life begins at conception to an extreme, where it begins with sperm cells – Lido called for “a moment of silence for the millions and trillions of children lost into a sock or a pillow. It’s about the children!” That song ended up with her quietly repeating, “It’s my body.” She made us dance, she made us think, she made us laugh, and her drummer is a frickin’ monster of a player. Hooray for Lido! 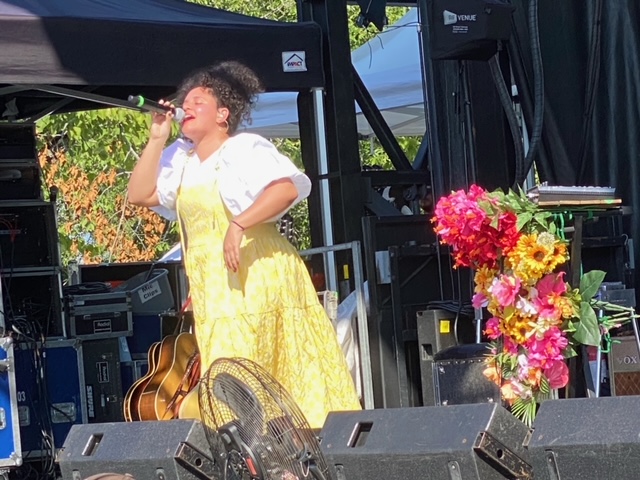 Souvenirs – The Songs of John Prine, on the Mainstage, saw John’s touring band (including the aforementioned Jason Wilber), fulfilling the commitment John made to play Mariposa in 2020, before COVID cancelled the festival, and then led to his untimely death. With his backing band, a series of guest vocalists breathed new life into a wide selection of John’s redoubtable repertoire, including Colin Linden and Tami Nielsen handling “In Spite of Ourselves”; Begonia soaring on the sweet “Come on Home”; and his son, Tommy Prine, joining the band for three-part harmonies on an excellent rendition of “Standing By Peaceful Waters.” The son was close to tears singing the last verse of the all-hands-on-deck finale, “Paradise,” and the set was a wonderful reminder of what an expert tunesmith John Prine was. And is, and will be, as his songs will likely continue to live on forever. 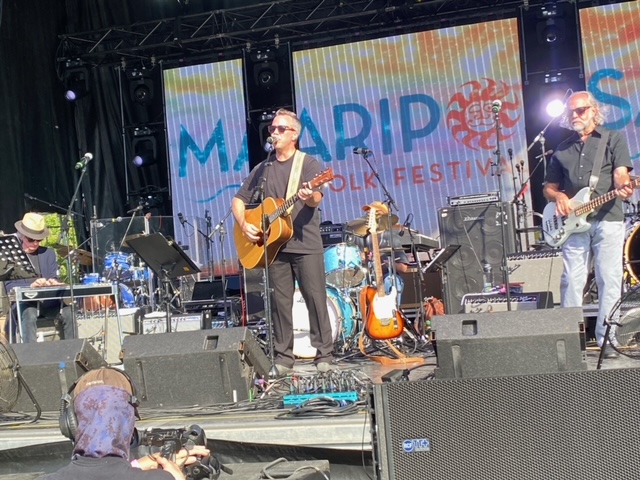 Having seen the aforementioned Allison Russell at a workshop earlier in the day, playing to her longtime folk roots (as she did in her former bands, Po’ Girl and Birds of Chicago), it was a bit of a shock – but a positive one – to see her going all rock ‘n’ roll, making dance moves around the stage in a skintight, blingy, iridescent, silver-lamé jumpsuit of the kind Little Richard might have worn, with wailing guitar solos and a hard-rockin’ band of women behind her. “Because of her, I survived my childhood,” said Allison as she introduced “Persephone,” which sounded more gloriously Springsteen-esque with a full rock band. She played banjo and clarinet, and sang up a storm. Between songs, Allison shared pithy aphorisms that make you both think and feel, like “Nobody’s coming to save us; there’s only us”; and “Empathy is a superpower, not a dirty word”; and “Tolerance is for mosquitoes; humans require love.” Let’s get her on a double-bill tour with Lido Pimienta and change the world for the better. 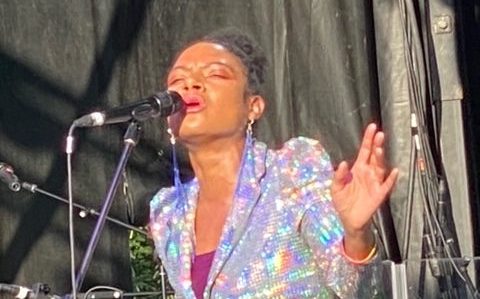 Allison Russell on the Mariposa Mainstage. Photo by Bev Kreller and Howard Druckman.

It’s now a tradition that Gordon Lightfoot shows up every year at Mariposa (the festival is held in his original hometown of Orillia, after all) and says a hello to the crowd or plays a song onstage. This year was different because he was being inducted into the Mariposa Hall of Fame. Mariposa Folk Festival President Pam Carter introduced him, and Lightfoot sang “If You Could Read My Mind” to a sea of people crowding the front of the stage, all trying to capture the moment on their cellphones. His voice may be thin and rough now, but it was a tremendously moving performance. As Tom Wilson said when presenting Lightfoot with his trophy, “He’s a man who lives in our blood.” In a video tribute, many kind words about the man were spoken by Tom Rush, Julian Taylor, Sarah McLachlan, Ron Sexsmith, Judy Collins, Steve Earle, Andy Kim and Don McLean. Then Lightfoot was thronged onstage by Blackie and The Rodeo Kings, The Good Brothers, Blue Rodeo, Serena Ryder, Anne Lindsay and James Keelaghan for a bluegrass/hoedown version of “Alberta Bound.” 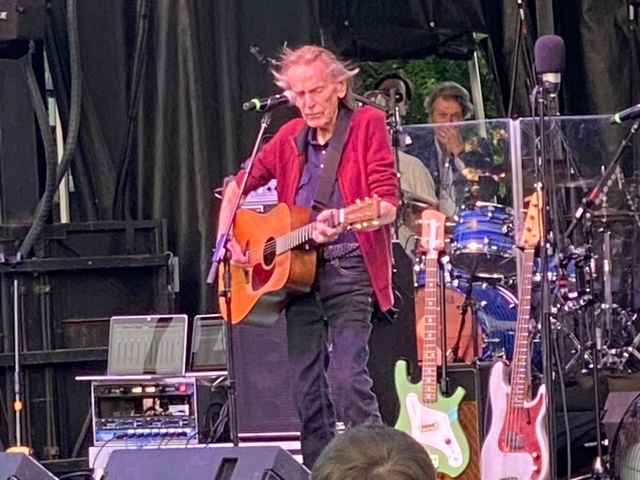 Serena Ryder opened her Mainstage set by saying that Mariposa was the first festival that she ever played, when she was only 18 years old, and played as a “tweener” – a 15-minute slot in between full-set Mainstage acts. She started with a short a cappella piece, then played one song with just her guitar, and then brought out her band of bass and drums. Playing to a packed front-of-stage crush of fans, she alternated between thoughtful, therapeutic material from her latest album, The Art of Falling Apart, and super-catchy hit songs like “What I Wouldn’t Do,” “Stompa” and an explosive version of “Got Your Number” (a personal favourite). She talked between songs about the need to create a safe space with good people around you, and about how vulnerability is both valuable and challenging. Her newest material suggests that she’s become quite the up-to-date R&B singer, and she wears it really well. But really, with her gift of a voice, folk, rock, R&B, blues, pop, soul, jazz, and virtually anything else is fair game; there’s no musical world that she can’t inhabit, if she so chooses.

With apologies to Blue Rodeo, after eight almost-consecutive hours of music, we just couldn’t last until the final set of the night. But I’ll bet that they crushed it. We did hear the powerful harmonies from Marla and David Celia in the distance as we made our way out of the festival gates tying a bow around Mariposa after another great year!

Dispatches from a day at London’s Sunfest ...