Dispatches from a day at London’s Sunfest (Saturday) 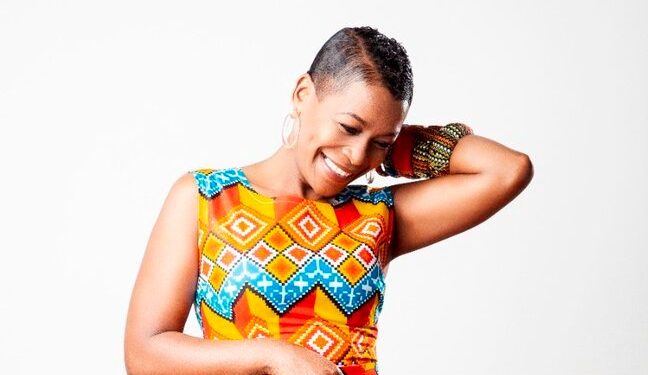 This is the home of SunFest, a world music and jazz festival that first opened its gates in 1995.

A dazzling array of vendors align all sides of the park pathways, displaying their rare treasures and irresistible treats.

From all the way at the other end of the park, hints of the delicious flavours from food vendors such as Rose’s Tree of Life Caribbean Delight, Plant Matter Kitchen and Churros Ricos find me almost before I find the South Stage.

An unbroken stream of bold and sweet booming vocals fill the air, accented by an intriguing twangy edge. 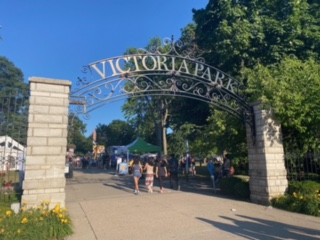 Suonno D’Ajere is a band from Naples. “Suonno D’Ajere” translates to “Dream of Yesterday.”  “Suonno” is a double entendre, as the word “suono” also means “sound” in Italian.

Italian, when it’s spoken out loud, has melodic qualities that already make it sound a bit like a song, so when it’s actually sung it is a bit more difficult to untangle. I can’t make out all the words; my Italian is a bit rustier than usual, and my mind hones in on a couple words in particular — actually literally two words that are sung by the vocalist: “due parole.”

They are two words that usher in the two worlds the vocalist seems to hover between like a tarantella as she seamlessly opens a hidden realm for the audience to enter. 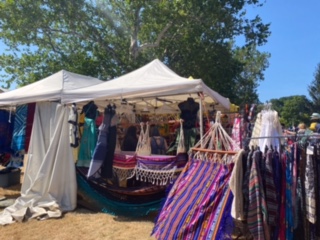 The mandolin weaves a romantic seamless stream of melody, sad and sweet in response as the upbeat playful guitar jumps in quick daring rhythms that rival a tarantella.

It’s a dance of sounds, playfully inviting, that weaves a web and makes its passage out of its suono mescolare, its sound mix, coaxing you to share a journey through the fluid waves of time and space through music.

After the set is complete, the musicians walk away carrying their instruments. The stage equipment is packed up and vanishes in a matter of seconds. They walk into the warm sunlight of Clarence Street together suddenly in plain street clothes.

But the South stage is only just warming up.

Long before the music begins again, a dedicated audience builds around the South Stage, a sure sign that this is going to be good.

The percussion and string section, and then  keyboard – first in synchronized harmony, then in syncopated rhythms – join, gathering momentum.

Just as the rolling progressive drum beats quicken then slow and then deepen in suspenseful steps, Neuza enters the stage.

Wooed by the sweet melodious acoustics of the Calypso guitar,  the smooth, round piano keyboard sounds a serenade of raindrops descending from the blue skies to join in the magical flight.

There is a penetrating power yet healing tenderness to Nueza’s vocals.

About two thirds of Cabo Verdeans live in the diaspora, so im/migration is a key theme that characterizes Neuza’s music.

Her work also features many curcuticans, which are rhapsodic duels traditionally performed between women and men.

Neuza’s music is rooted in talaia baxo and rabolo, the distict sounds of the island of Fogo where her family has its roots. 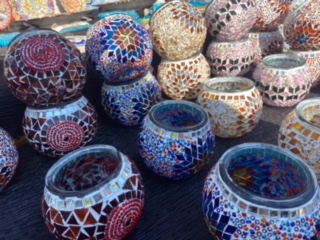 Set off by the round deep spell of the keyboard, a rainbow spiral of sound opens with the final song, “Trebessado.”

A mystical fabric is woven from Neuza’s indigo pastel suit.

She invites us to sing, and the crowd is easily swayed. We all exchange an enchanted breezy chorus of vocals, led by Neuza.

A spiraling, dancing line of people from the audience follows her as she appears amid the crowd offstage.

Children of all ages find their way into the dancing parade forming, all the way from Boston via Cabo Verde [via London]!

Jeremy, Larnell, and Rich are mutually immersed in the pulsating energy of the music flowing seamlessly from their bodies into their instruments and out to the airwaves reaching the audience.

Lightning fast finger work on the piano keys is balanced by the furious impassioned beats of Jeremy’s feet on the piano pedals. 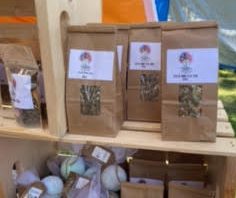 In key moments, the deep rhythms of the bass drive the arrangement, then gradually and gently the piano finds its way back in, with a  song as gentle and serene as a sun shower, broken by the powerful presence of the drums.

I look around me, I see a handful of kids sitting on a tank named the “Holy Roller” serial number CT152655.

I see someone wearing a t-shirt that says “Brain freeze.”

Then a madly beautiful solo erupts from Jeremy’s piano just in time.

The speechless crowd is transfixed. 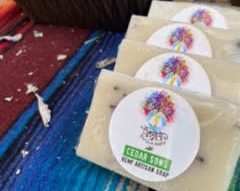 Jeremy has now traded in his piano for a melodica, a wooden hand-held mini keyboard played by blowing air into a mouthpiece on its side.

And just when I think it can’t get better, Eliana Cuevas, who also happens to be Jeremy’s wife, joins in. Her rich, sweet vocals join the fantastic eruption of sound.

And Jeremy casually asks the crowd, “Has anyone here been to Brazil?” just before we are  swept away to its shores.

A tambora  joins into the mix and we feel the full force of the steel drums.

With  each strike of the drums, an additional beat is created, in a gravity-defying mastery of exchanging rhythms.

Jeremy then offers the audience “The Pepper Drinker Song.” We hear that this is a song about a man who dares to eat a sauce known as “Mother-in-law,” made from extremely hot peppers.

The song is a jazz retelling of the 72 hours that follow his post hot pepper sauce consumption. It features a dizzying  instrumental fusion that rises, fades and gently returns with a vengeance.

A few people emerge from the crowd to dance at last, to shake off the beats that seem to consume them.

I walk back on the path that runs parallel with Clarence Street; my field of vision hones in on the jars of jalapeño jelly displayed on tables just at the edge of the park gate.

As I drive through the intersection of Dundas Street and Wellington, I hear the Calypso sounds of another band of musicians playing at a nearby street festival.

I had no idea that London, ON is Canada’s first and only UNESCO city of music, but there it is right there in front of me.

As I drive out of the city, I find myself dreaming back to the music diasporas of Brazil, New Orleans, Cabo Verde, and Italy right in London, where jar upon jar of Country Style’s home made pepper mix sauces await to be opened once again.

Dispatches from the 2022 Mariposa Folk Festival: ...