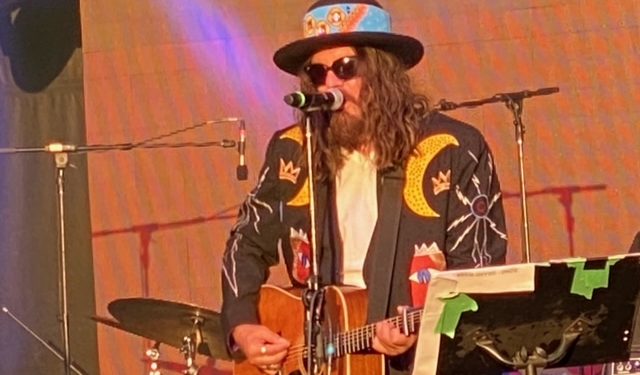 To start with, I’d like to give a shout-out to the staff and volunteers here at Mariposa, who have all been so warm, inviting, and accommodating. It’s always a pleasure to come to here.

As we pulled in for day two, we could hear the sound of David Woodhead’s version of Peter Gabriel’s “Red Rain” gently wafting on the breeze. A good omen.

We caught Vinta’s performance at the Village Stage, wherein Emilyn Stam, John David Williams, Nathan Smith, and Robert Alan Mackie breathed vibrant new life into old traditional songs and added to the tradition with their own tunes. Between two fiddles, a bass, an accordion and a clarinet, they covered a lot of ground. For the finale of their set, Emilyn told the story of a Dutch woman that the band met, who managed to get her elderly, infirm, and senile mother to get up and waltz, as she remembered the steps of her youth and pushed past her illness. Then she suggested that we all waltz to the last song of their set, and at least half the audience did just that.

We caught most of Aysanabee’s set at the Ruth Stage, where his deep, powerful voice, distinctive string-tapping style, and hypnotic groove clearly impressed a full crowd, making him a lot of new friends and fans. He’s the first artist signed to the new Indigenous-owned-and-operated record label, Ishkode, run by Amanda Rheaume and Digging Roots’ Shoshona Kish. Between songs, he talked about how, as a young man, his makeshift dirt bike and bow and arrow fell to ruin, but the guitar really stuck. He also discussed how his next album will be a set of songs based on a series of conversations with his grandfather – a residential school survivor – that Aysanabee recorded, so that his ancestors’ history isn’t lost forever. His own future looks bright indeed. 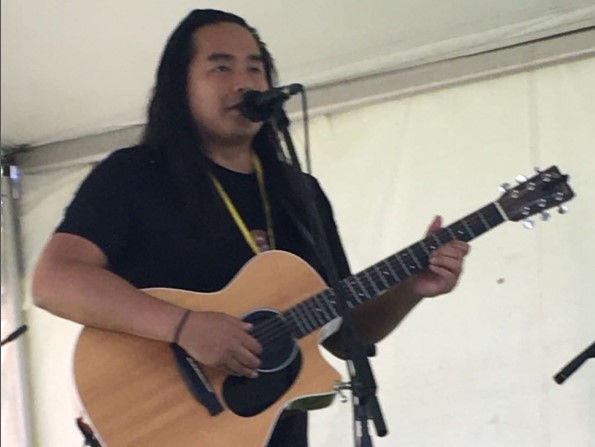 Alysha Brilla really needs to be on the Mariposa Mainstage. She engages the audience so much and so well, her songs come from deep thought and strong feeling, and her loving spirit always shines through. Today, on the Ruth Stage, all of that held true, as she shared new songs like “Echo,” about being of mixed parentage (including Irish, Tanzanian and Indian), and “Peace,” which ended with a beautiful three-part harmony between her, ace sidemen Sammy Duke (on simultaneous bass and cajon) and Gerima Harvey (on djembe and conga). As usual, it didn’t take  much for her to get a crowd of fans up and dancing, and feeling good.

At the Bohemian Embassy Stage, the Pairs – Hillary Watsonand sisters Renée and Noelle Coughlin, shared beautiful three-part harmonies, as befits a gang of classically-trained vocalists. Ably backed by their drummer and bassist, the trio offered quirky and compelling originals like “Annie’s Song” (not to be mistaken for the John Denver classic hit) and another that arose from writing down feelings before a very first therapy session. In both form and content, the London, ON-based band reminded me most of the Roches – which might be a lazy comparison, but is still a high compliment in my book. They have a warm, friendly vibe that’s very appealing. 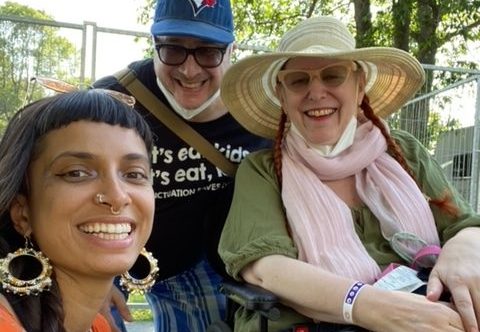 On the Mainstage, the unstoppable force of nature that is Mavis Staples was still singing, shouting, growling, and spreading the funky, soulful, good-news gospel truth of love and understanding between all people. From funky ‘70s hits like “Come Go With Me” and newer songs like “Friendship” to ancient gospel classics like “Wade in the Water” and well-chosen covers like Funkadelic’s “Can You Get to That?” and Talking Heads’ “Slippery People,” Mavis took Mariposa to church in the best possible way. Between songs, she was equally inspirational, seeing “all of this joy, all of this beauty” in the audience, telling us to “get loose, like a bowl of Jell-O,” and responding to audience shout-outs with humour and grace. Of course she closed with “I’ll Take You There.” Of course it lit the place up, and of course she earned a standing ovation. I can’t say enough good things about Mavis Staples, and I’m so glad I got to see her live and in person while she’s still able to tear the roof off the joint.

Before the next Mainstage performance, the Canadian Songwriters Hall of Fame (CSHF) inducted Murray McLauchlan into its ranks. After a speech by CSHF director Nicholas Fedor lauding Murray’s 35 hit singles and 11 Juno Awards, and a short video about the man, his fellow classic Canadian songwriter Gordon Lightfoot (an Orilla native who always shows up onstage at least once during every Mariposa festival) presented Murray with his trophy. After a short speech of thanks, Murray called up his pals Blackie & the Rodeo Kings for a raggedly glorious version of his ode to Toronto, “Down By the Henry Moore,” before they started their own full set. 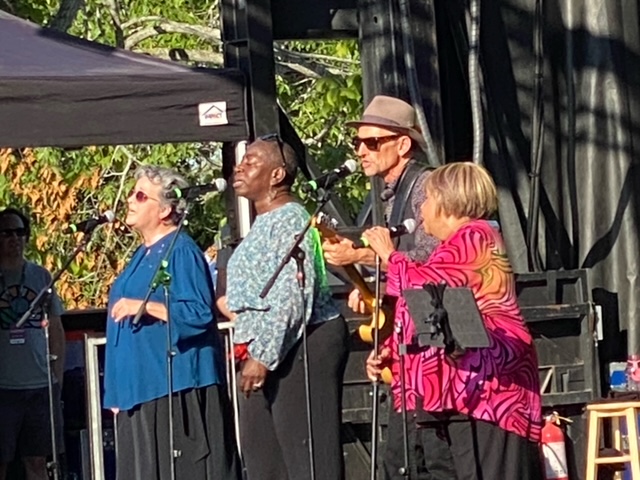 Blackie & the Rodeo Kings were wildly energetic, led by the basso profundo voice and drop-dead cool of Tom Wilson, the tasty slide guitarwork and total commitment of Colin Linden, and the great songwriting of Stephen Fearing. Nodding to his relatively recent discovery of his Mohawk heritage, Tom led the trio (backed by bassist John Diamond and drummer Davide DiRenzo) in a moving, backwoods-style harmony-vocal breakdown on “Grand River’ that included his son Thompson as well. As suits a group that’s been together for almost three decades, much of the set was spent on covers of songs by absent friends who’ve passed away. They dedicated their version of the Band’s “Remedy” to its late great members Rick Danko, Levon Helm, and (in the latter years of the group) Richard Bell. They played songs for favourite folk festival MC Michael Wrycraft, their lifelong graphic designer, who died this year. And of course, they played a Willie P. Bennett song, since the reason they got together in the first place was to do his songs. They also dared to play their take on Gordon Lightfoot’s “Summer Side of Life,” with Lightfoot watching in the audience. Why? “We’ve got big balls,” Tom explained. Yup, they do.