Dispatches from the 2022 Mariposa Folk Festival day one (Friday) 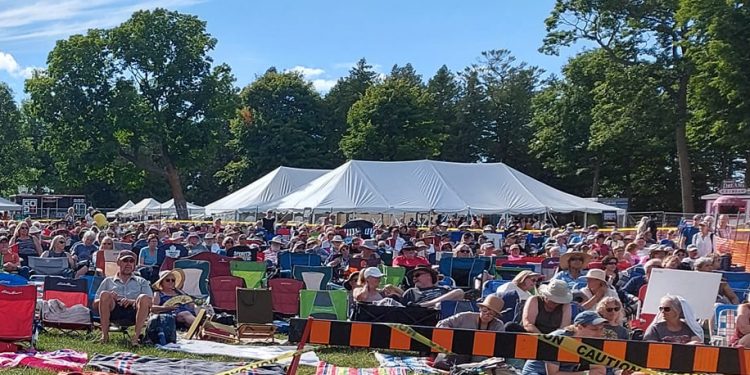 Mariposa 2022 got underway Friday. This photo comes courtesy of their Facebook page.

After a long Friday afternoon drive up the 400 from Toronto to Orilla, with no cellphone GPS to guide us to our exact destination once we were in the general vicinity – thanks to the all-day Rogers service disruption – we finally got to Tudhope Park in time to see a set by JP Saxe on the mainstage, just as the sun was going down. A professional behind-the-scenes songwriter-turned-artist in his own right, JP offered a solo-with-guitar-or-piano set full of sad, slow songs about a hard-hitting breakup. But he more than made up for it with his engaging banter.

“This is kind of like a first date,” he said. “We’re staring at the sunset; we’re in a park, and I’m going to tell you a lot about my ex-girlfriend.”

Later, he talked about being put down in high school for “being sensitive, being a ginger, and liking to sing” – only to find that he now has a pretty wonderful life precisely because of all those things. While most of the Mariposa crowd in their folding chairs applauded politely, he was really playing to the younger crowd (mostly girls) down front, who were singing along rapturously to every word. And why not? JP sings like Shawn Mendes, writes captivating songs, has some major piano skills and is charming as hell onstage. What’s not to love?

After cultivating a huge following as a teenager a few years ago, through six (or was it seven?) seasons playing a principal role on the Nashville TV series, Lennon Stella has now fully occupied her role as a pop star. Although her smooth, full-band, big-scale production on the mainstage seemed a bit of a mismatch for a folk festival, she’s clearly an expert at it and still enjoys being a little goofy and fun onstage. And she did break it down for a solo-acoustic spot mid-set, including a cover of a Dido song. She gladly brought out JP Saxe for a duet on a song they wrote together, with some help from the great professional songwriter Simon Wilcox; it looked like she and JP were really enjoying themselves. Like him, she was also playing to the young crowd down front: she complimented them on their high energy, proudly wore a homemade hat that one of the fans handed up to her, and accommodated another by taking their handed-over cellphone and shooting a short video of herself mid-song, before tossing it back. Now there’s a memento they’ll treasure forever. And like Half Moon Run did back in 2019, Lennon gamely weathered the shitstorm of bugs (she even accidentally ate one) that invaded the stage for her entire performance. Is that a Mariposa tradition, or what?

For the last set of the night, we were off to the pub stage to catch the hotly-tipped Ruby Waters, who was even better than expected. She was in fine voice, sounding a little like the young Stevie Nicks, with a warm, rich tone and catchy phrasing. And she’s a natural onstage, owning every inch if it, like she was born to it. (Maybe she was.) Her soulful, Stones-y rock ‘n’ roll, as played by her solid band, closed the night with a welcoming, congenial vibe to send us home smiling.