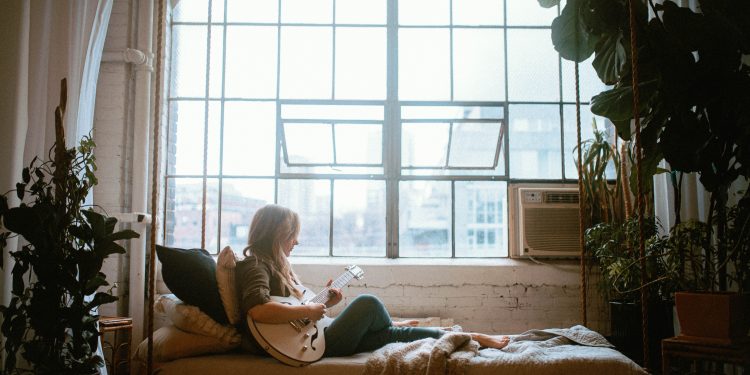 Spotlighting Alanna’s vulnerable lyrics and ethereal vocals, Thoughts // Feelings combines spacious dreampop textures with the warmth of acoustic singer-songwriter sensibilities. Self-produced and recorded in her Toronto home studio, Alanna digs deep into her own personal expression by way of songwriting and sound across the album.

“This album ended up turning into something so much more personal and important than I could have imagined, and I’m so proud of each of these tracks and look forward to the life that they’ll have with a full release. Featuring musicians that I met via live streaming, and recorded on gear mostly funded by my fans and community, not to mention mixing and producing it myself during a global pandemic is a wild recipe for making an album. This is the best representation of me as an artist to date, and I’m really proud of the work that’s gone into it” Alanna said.

We thought it would be fun to ask Alanna to walk us through the stories behind each track on her new album. Take in Thoughts // Feelings below on Bandcamp as you learn about each tune!

“‘End up Alone’ is one of my favourites; it’s so simple and yet so effective at the same time. So many people can relate to that helpless feeling either at the end or even during a relationship when you feel more alone than together. This version leans into that anger and despair more than the acoustic version, that growing frustration in the bridge when you feel like you’re doing everything right and yet things just aren’t getting better.”

“A few years ago, I found myself in a really bad mental state. I was stuck in a bad situation at my current job and felt like I was losing myself in the process. That year I tried to take a photo every day in an attempt to keep my memory working, and ‘Documentation’ was my attempt at writing a song about that feeling of being aimless and stuck at the same time”

“Every time you see a movie or read a book, it’s impossible not to see yourself in the characters, but I’m never sure which one I’m supposed to be. I want to be strong and loud, but it’s also nice to be quiet and soft. Why can’t you be athletic and smart at the same time? Kind but also bold? Playing online I’m constantly falling into old habits of wanting to please everyone, and shapeshift myself into who I think people want me to be, because ultimately we all just want to be liked don’t we?”

‘My first instrumental song to be released. I used to imagine that if my life were a movie, this would be my theme song. A little melancholy, a little dissonant, but it resolves itself in the end”

“Those times when you fall in love too hard too fast and then blame yourself for it when you get hurt, that’s what this song is about: putting too much stake into a relationship and caring more than the other person does, to your own detriment. I love and hate the vision of someone coming over, breaking up with you and then driving away as though nothing happened. You’re left there shattered, and they’re off to navigate traffic and find their way home, relieved that it’s over.”

“This is by far the oldest song on the record. I wrote this before “Why I Can’t Sleep,” and since the themes were similar, I disregarded this one. I recently picked it back up though and gave it the treatment I think it deserves. I was in a number of long distance relationships, and this song is about that feeling at 2 a.m. when you hang up the phone and go from feeling so connected to suddenly entirely alone. It’s like the world comes back into focus, and you’re left alone with your doubts.”

“Having mental health issues is never easy, even when you have support. The more it goes on, and the more you talk about it, the more you feel like everyone around you is just going to get sick of it or stop believing you. This song is about that feeling, like you know that you rely on these people but you also feel like someday they might just leave you behind.”

The World Was Lonely

“Ah, COVID. I wrote this song in October of 2020 still trying to wrap my head around how the world had changed, and how strange it was that out of nowhere, everyone was left to their own devices, that all at once the world was lonely. There was a lot of anxiety for me through that time, worrying that my friends wouldn’t understand that I was trying to be safe, not that I didn’t love or care for them. I missed the ease of pre-COVID, but I wasn’t willing to risk my health or the health of my family for the sake of someone’s feelings.”