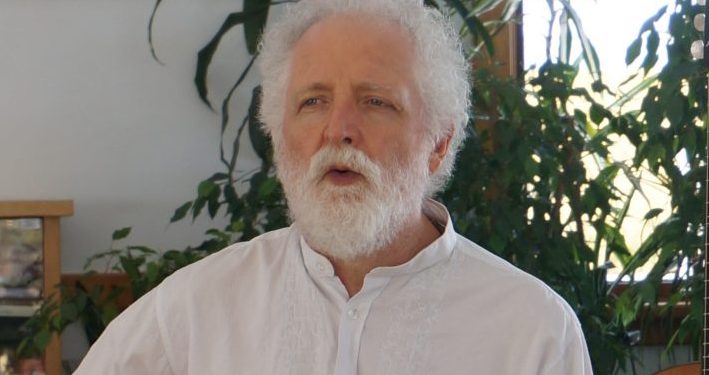 When people look down at folk music and disparage it in any way, they always seem to bring up songs like “Kumbaya, “Michael Rowed The Boat Ashore” or any songs from the so-called folk music boom of the late 50s and early 60s as examples of how simple and/or cheesy the genre was. But for many people of a certain age, these songs were a gateway into a rich tradition of timeless music. Folk music veteran Ken Whiteley is one of those people, and he proves these songs still have importance on his new album, Long Time Traveling.

“For those of us who have been around folk music and heard so much great music over so many years, if someone were to start playing ‘Michael Rowed The Boat Ashore’ or ‘The Water Is Wide.’ eyes would roll,” Ken said from his Toronto home. “Yet so many of these are beautiful songs, and so many of them have stories that haven’t been told or have aspects to them that I thought deserved to be brought out or re-interpreted. In some cases I wrote new lyrics; in some cases it’s in the arrangement going back to the roots of the song. Sometimes it’s in taking the song to somewhere new. So I had a lot of fun really exploring so many of these great songs … and they are great songs.”

Take for example “Michael Row” which comes from the Gullah tradition of African-Americans living from the coast of the Carolinas down to Florida.

“I had known for decades the song was originally from the Gullah tradition but I also knew the version we all know, beautiful as it was, didn’t really reflect that Gullah tradition,” Ken explained. “Guy Carawan, who was a singer-songwriter/political activist, recorded a bunch of songs on Johns Island in South Carolina in 1960-61. He recorded a variant of the song ‘Row Michael Row,’ which was very different (from the popular version).”

Ken has had a fascination with Gullah music since first seeing the Georgia Sea Island Singers at the 1969 Mariposa Folk Festival.

“In this modern age it’s incredible what you can find if you keep digging on the internet and go to Page Two of what Google search turns up,” said Ken, laughing. “I was able to find the story of how that song was originally copied down in the St. Helena Island area of South Carolina.”

The sheet music was written down by a Quaker during the American Civil War. Folk singer Tony Saletan found the music at the Library of Congress in the 1950s and established the melody we know so well.

“If you listen to the recording Guy Carawan made, you hear a voice that is more faithful to the Gullah tradition [without] those perfect thirds that you find in Western music. You can imagine what was originally heard in the 1860s. I thought it would be fun to bring it back, taking from a bunch of different sources.”

Given how the times we’re living in have changed how we access music and enjoy it, Ken has come up with a unique way to share the stories behind the songs on Long Time Traveling. Instead of supplying a booklet containing the stories, he’s put together a series of “video” liner notes.

“I mentioned to one of my neighbours, who’s a young singer in her early 20s, that I was recording this album. I said, ‘You probably don’t remember these but the old Folkways records would come with a booklet and extensive liner notes for each song. That’s what I’m imagining.’ she said, ‘Why don’t you just make a little video about each song and put that up on YouTube, and people can look at your little intro?’. It was like a light bulb went off in my head. That would be the 21st Century way to do it.”

But as is usually the case, what was initially thought of as a quick and easy project quickly became more complicated.

“I had to learn how to edit video!” Ken said laughing. “I’m gonna do a song from the Appalachians so I better get some good visuals of the Appalachian Mountains to create the atmosphere I want. So instead of me standing there with my cell phone in front of my face for two and a half minutes, I’m now involved in a more extensive process. But it’s fun and it’s something I’ve wanted to do for a long time. So I’m having fun with it.”

Adding to the fun for Ken was working on the album with his son, Ben. Because of the pandemic, the accomplished musician in his own right was available, instead of being on tour with the likes of Basia Bulat, Julia Jacklin and The Weather Station.

To find out more about Ken Whiteley and Long Time Traveling, go to kenwhiteley.com.

Harrison Kennedy – Thanks for Tomorrow