Check out the super unique harmonies of Lunar Bloom 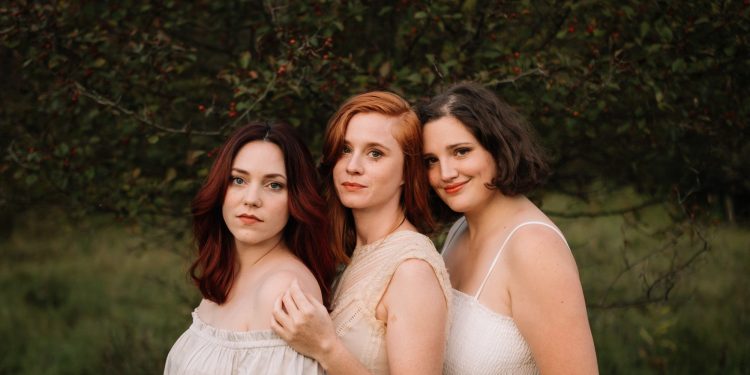 Lunar Bloom is Brittany Rae Robinson, Kelly McNamee and Jocelyn Regina, a Toronto-based trio rooted in the folk tradition. Their original songs feature complex vocal harmonies and intimate storytelling. Running Deep is available on all major platforms through CD Baby. For more information please visit any of the links below and at Lunar Bloom’s website.

Lunar Bloom often takes its feminist consciousness and three-part harmonies into surprising, unexpected, even stunning directions, not unlike New York late-’70s trio the Roches. That much is certainly clear from the three singles already drawn from the album: “Heroes,” “Call Me A Woman,” and the title track, “Running Deep.”

Elsewhere on the album, “Angry All The Time” starts quietly, but then lives up to its title with a loud and powerful reprise of the chorus, which ultimately resolves into a dreamy, atmospheric vibe. The song was inspired by a recurring dream of getting into an intense argument with someone and the realization that this dream was about an incident that happened in high school.

The intricate, gorgeous, inventive harmonies in “Oceans” are a physical metaphor for the waves, and examine the persistence of shame and regret and the possibility of overcoming them.

“It was written for a loved one going through a great life struggle,” said Brittany Rae, who provided lead vocal.

The song showcases three-part harmonies for almost its entire length, almost as if the Beach Boys became girls, learned about metaphor and boldly extended their harmonic style.

“La Lune,” sung in French and completely a cappella, is a lullaby for the heart – a young lover confiding in the moon, asking for advice, and pleading for her loved one to be returned.

Lead by Jocelyn, “Garden Song” is as close as Lunar Bloom comes to a traditional pop song format, although it’s closer to a lost ’60s British psych-pop single — albeit one with an unlikely pedal steel solo, courtesy of the redoubtable Christine Bougie.

Lunar Bloom is full of playful banter and dreamy love songs, balanced with feminist anthems and calls to action. The members embrace harmonic tension, and rhythms that challenge expectations, creating the story of each song through musical devices as well as poetic lyrics.

They call it “dream folk.”

Their self-titled EP was nominated in the folk/roots category for an Independent Music Award in 2020.

Singles “Sweater” and “Monster” from the EP made it to the top 100 in CBC Searchlight 2020, and have been featured on CBC’s Fresh Air.