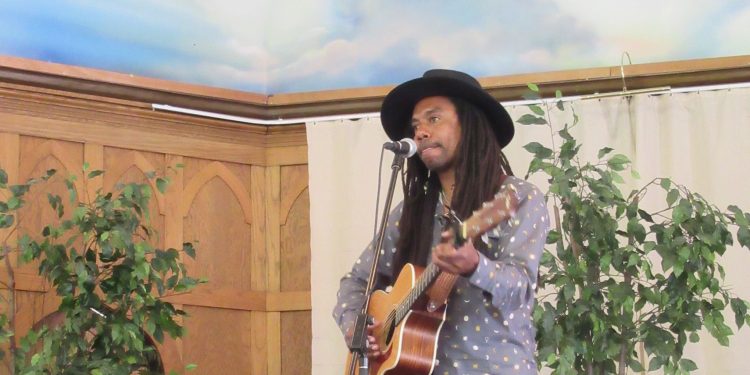 Venerated Toronto folk venue Hugh’s Room Live held an event last week to show off what it hopes will be its new home. Its board of directors reached an agreement to buy the church at 296 Broadview Ave. after securing a loan guarantee from the City of Toronto. Originally opened by Richard Carson in 2001 and situated at 2261 Dundas St. W., Hugh’s closed its doors in 2020 when its current owners were unable to renew its lease at an affordable rate. The board had been promoting shows in other venues when pandemic restrictions permitted, while looking to purchase a building in order to guarantee the club’s future. Corby was on hand to check out the new digs last week, and he brings us this report.

In spite of an ongoing evaporation of cultural channels and points of assembly, folk music inevitably galvanizes communities and creates new, co-operative, pragmatic vectors for communication.

Evidence of this coalescent energy is apparent as the board and supporters of Toronto’s Hugh’s Room Live continue to press forward in their intent to sustain the life of the city’s premier folk venue.

A meeting of interested parties took place last Thursday at 296 Broadview, just east of the Don River, in a 128-year-old church, designed by E.J. Lennox, the architect of Casa Loma, which will be the new home of what is arguably Canada’s folk headquarters. 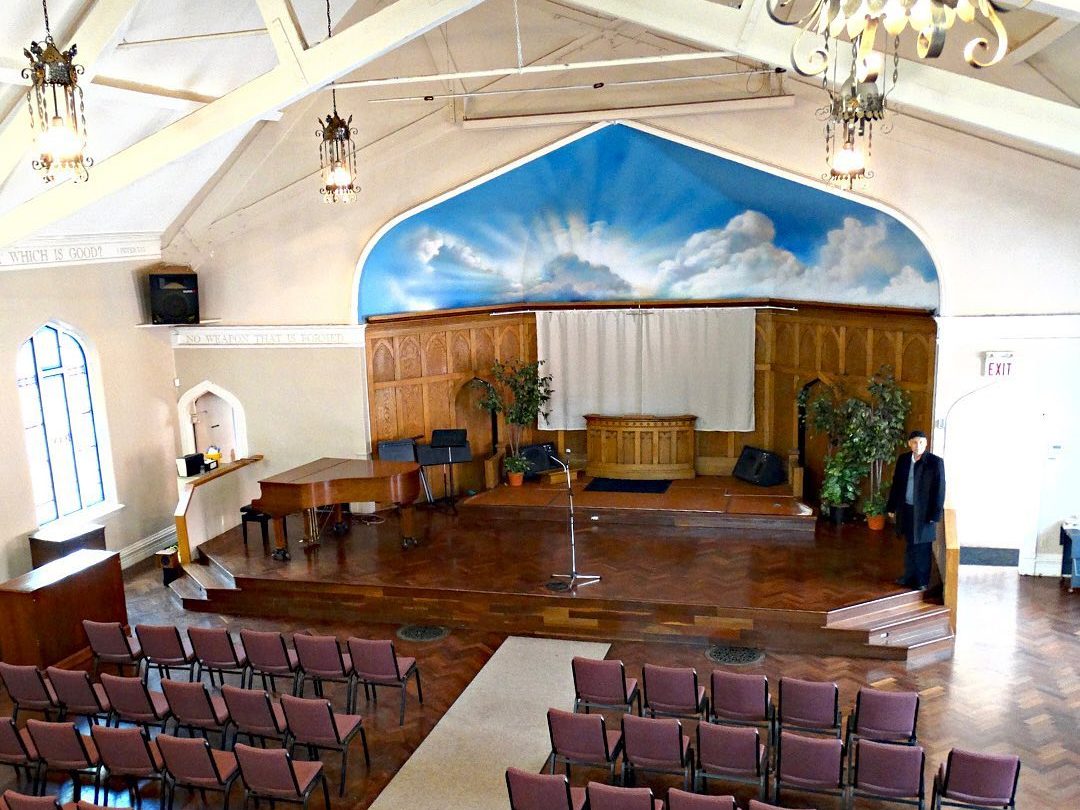 The evangelical verve of the participants in reviving that revered performance space, which has been operating as a presenter in other T.O. venues since the start of the plague, was enhanced by the aura of stained-glass windows, the inspiration of the heavenly mural over the pulpit, and that incense/black bible fragrance that all old churches have. With its vaulted ceiling and hardwood floors, the venue certainly seems made for song, and this was borne out splendidly with a brief concert by Julian Taylor, previewing some songs from his next album and highlighting the acoustic clarity of the room.

As the first performer in the new venue, Julian took the honour seriously, singing songs focused on social justice issues, prefiguring the H.R. board’s intent to prioritize their commitment to community involvement. He was warmly congratulated afterwards by Murray McLauchlan, a local resident and an enduring icon of Canada’s folk music scene. 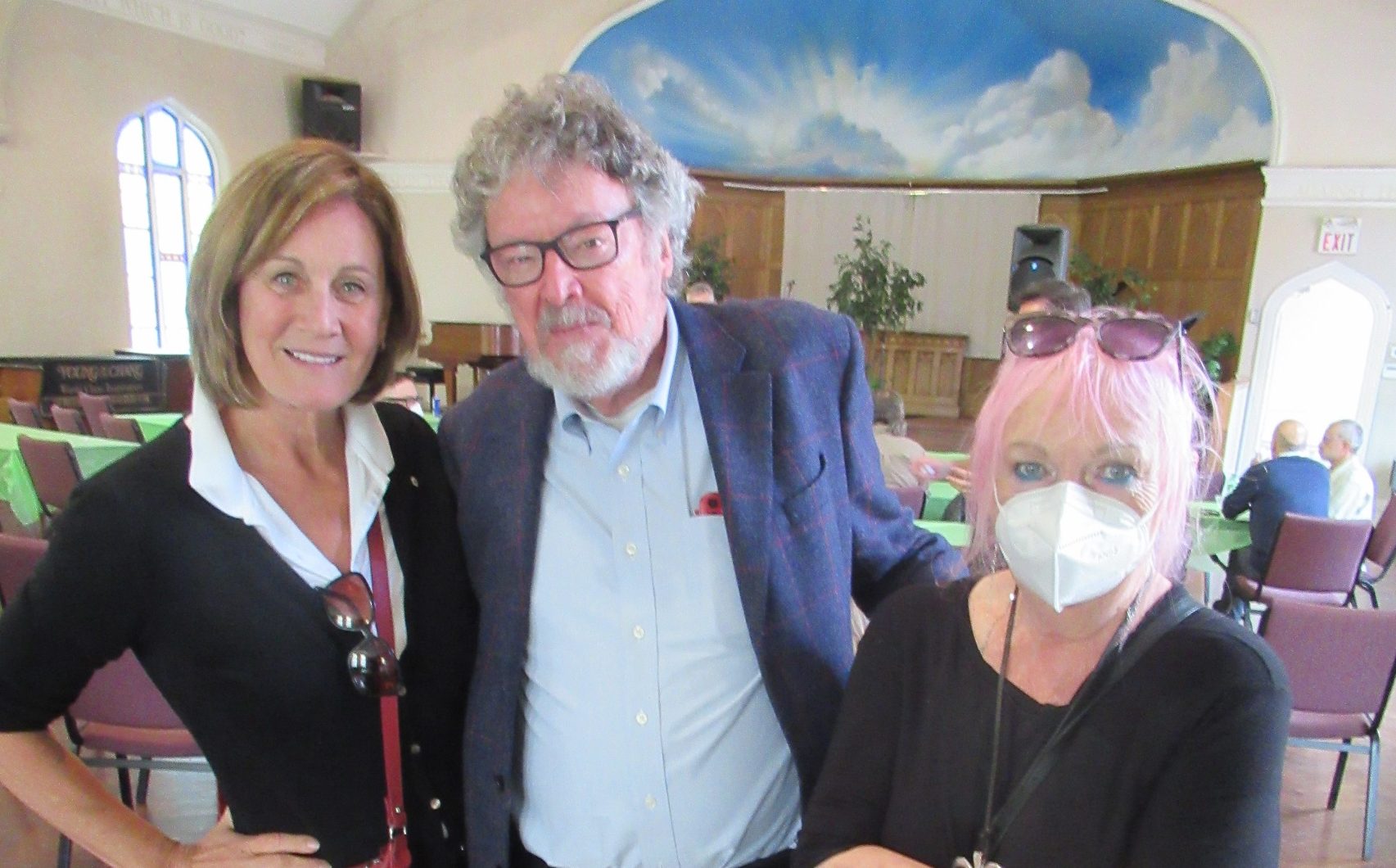 Denise Donlon and Yvonne Matsell pose for a photograph with Brian Iler of the Hugh’s Room Live Board. Photo by Paul Corby.

A planned outreach to the neighbourhood will welcome music education groups, artists and activists to make use of the hall for recitals, lessons and strategic initiatives to solidify Hugh’s Room’s mandate to preserve and re-activate urban folk culture. The lower level of the building is to be occupied by Silver Thorn Studios, a rising T.O. recording operation, which will operate independently and also take an archival role in documenting the live presentations that occur on the main stage. The potential for a second performance space downstairs is also being considered. A functioning basement kitchen is in place already, preserving the tradition of fine food and bevvies that has been a major part of H.R.’s attraction all along. And Sunday morning services will, in fact, continue, potentially linking into Hugh’s Room’s traditional Gospel Brunch.

The establishment of an outstanding venue in this area will further the evolution of this section of Queen Street East, which has benefitted from the recent refurbishment of the Broadview Hotel, soon to be offering its own live entertainment programming on its main floor, and will also resonate with the proximity of the Opera House, which will soon be returning to its variegated live music policy.

For over 20 years, Hugh’s Room has provided a window in which international artists and Toronto’s traditional and creative musical talents can abide and grow their visions. In the foreseeable future, that window will now be enlarged, more accessible, and enhanced with stained glass. Fundraising for this dream is ongoing, and donations will be welcome in all forms. Please contact Hugh’s Room Live if you feel that you can offer any help.

Correction: the intro note to this story previously included the wrong address for the former Hugh’s Room location.

The Small Glories touch down at the ...