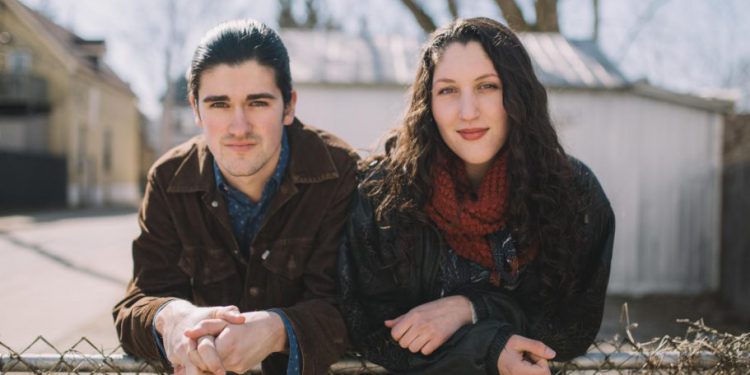 “Narrative songwriting is an exercise in empathy,” said Braden Phalen of the Guelph Ontario duo Tragedy Ann. “Whether we’re speaking from personal experience or experience close to us, at our best we’re trying to understand what that must feel like and do our best to take a peek through that perspective.”

Braden is talking about some of the songs on their new album, Heirlooms. Creating songs that touch on subjects like Parkinson’s disease, unwanted pregnancy and sexual abuse requires a deft hand lyrically.

“The song ‘Float Away,’ about the unwanted pregnancy, is like a combination of a lot of real stories that happened throughout history and are still happening now,” said Liv Cazzola, the other half of Tragedy Ann. “Through that we’re able to draw those connections, and from there you can decide what is right and what needs to change in the world to allow for softness and kindness.”

“Float Away” begins with the Italian song “Canzone per te” by Sergio Endrigo, which Liv remembers her grandparents always singing.

“The lyrics of the chorus are about a ship that’s leaving, and the people onboard don’t know what is going to happen, but they know they are together,” she said. “The nautical theme and the departure suited ‘Float Away.'”

Liv and Braden say Heirlooms is a call for a deeper connection with each other and with the natural world.

“It’s something that evolved,” said Liv. “A lot of us were resistant to the idea of this pandemic lasting as long as it has, particularly for the music industry. I realized early on the connection to nature was paramount for making sure I felt grounded and was able to process my feelings.”

The married couple also took the opportunities to be more involved with their community than they already were. Braden sits on the board of the Guelph Arts Council and was recently appointed president. The Guelph Arts Council aims to help start new cultural initiatives while also promoting understanding and respect for the values of the arts. Liv is a founding member of the Canadian chapter of Music Declares Emergency, which was created by artists, music industry professionals and organizations who are concerned about the lack of an industry-wide response to the climate emergency.

Tragedy Ann’s hometown album release on June 10 will feature a 12-piece “folkestra” to fully recreate the string arrangements on Heirlooms.

“With these songs, and in general, when we’re writing, Liv and I tend to have expensive tastes,” Braden admited. “We wrote these pretty ambitious songs, and by the grace of some grant applications we were able to get funding to record them the way we wanted to.”

The highlight for Liv was the recording of the opening track, “Australia,” which was done the way songs used to be in the 1950s and ’60s with the orchestra, piano and vocals all performing at the same time.

“That’s a little bit of pressure for us who are maybe not as experienced in the studio as the string players were,” said Liv laughing. “‘Australia’ is very ‘roboto,’ so the tempo is so much about feeling and really connecting with those players in the moment. It’s my favourite time in the studio to date.”

For more information on Tragedy Ann and Heirlooms, go to tragedyannmusic.com.

When James Gordon had a hit song ...