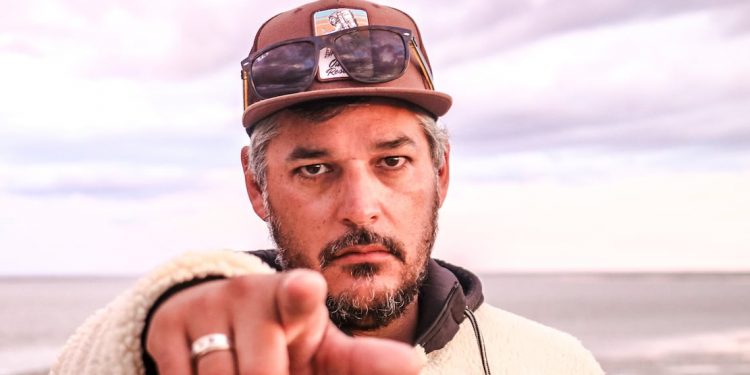 Last week, Adrian Sutherland was featured on an Amazon Music billboard in Toronto.

He is in the city for the Juno Awards this weekend.

His first solo album, When the Magic Hits, is nominated for the category Contemporary Indigenous Artist of the Year.

“My very first reaction when I found out was that it didn’t faze me at all, because I think I trained myself not to have any expectations anymore when it comes to music. And as the day went on, it started to really hit me, and as I was getting congratulated by friends and family and peers in the industry, it started to feel really special, and I was excited and and I was happy,” Adrian told me.

This is the first time he has left his home community of Attawapiskat since the pandemic started.

“It was a bit of a strange feeling,” Adrian explains, “I mean, there’s always a bit of a shock when I leave the spruce tree line. I actually came out of our remote hunting camp just a few days before I got my flight to Timmons and then to Toronto,” he said. 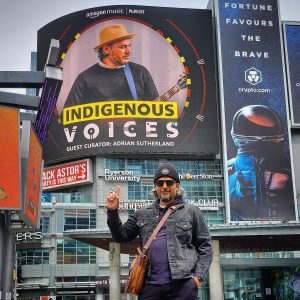 Adrian was first introduced to music at a young age. He grew up around his mother playing the guitar. He listened to Tom Petty records and, in his teen years, his music taste expanded to a variety of genres including hip hop, heavy metal, country, and rock.

He became an established musician when he formed the band Midnight Shine in 2011. Together they produced three albums Midnight Shine, Northern Man, and High Road.

One of his career highlights is sharing the same stage as Tom Petty at Bluesfest before he passed away in 2017.

“It was a real eye-opening experience. I was literally two feet from all his instruments, his guitars. It was somebody I grew up listening to and a big fan of, it was just really an amazing experience for me. I’ve never would have dreamed of sharing the stage with somebody so legendary,” said Adrian.

The pandemic has since put a wrench in the band’s plans, but Adrian saw the opportunity to pursue a solo project.

When the Magic Hits reveals a new side to him that fans haven’t seen. While his music is historically polished, this album is “rough, straight out of the woods,” he explains.

Adrian hopes to continue using his voice and platform to elevate Indigenous Peoples and represent his community.

“I think coming from an underrepresented community, like Ottawa, Prescott and being Indigenous, getting to showcase and highlight and shine positive light on the Indigenous artists, I think, my nominees we’re all winners in this. We’ve come a long way,” he said.

The Juno Awards are this weekend in Toronto at the outdoor venue, Budweiser Stage. It is also available live on CBC TV.