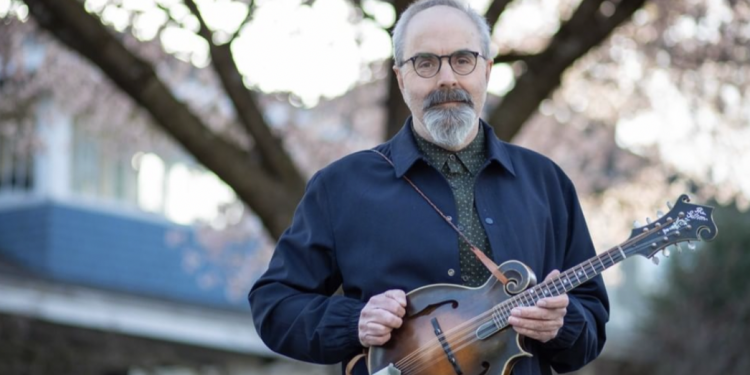 John Reischman is no stranger to musical success.

His band, the Jaybirds won a Grammy Award in 1996 for its CD True Life Blues: The Songs of Bill Monroe.

But this year’s Juno nomination for his album, New Times and Old Acoustic, is different, he said.

“It’s starting from scratch, so this recording is all me; it’s all my originals, and I arranged the music and chose the musicians, chose the art direction person. It does feel different. [It] feels good. I’m happy about it,” said John.

John brought an impressive lifetime of experience to the latest project.

He was born in Ukiah, CA, to a musical family. His sister is an excellent singer, he said, and his brother exposed him to the guitar.

He became interested in bluegrass music by watching TV shows like the Beverly Hillbillies and the Andy Griffith Show. Rainbow Quest with Pete Seeger aired in the 1960s, featuring folk performers and introducing him to a lot of great music. It sparked an interest in the acoustic side of music.

John learned to play guitar during his childhood, but it wasn’t until his early 20s that his focus turned to the mandolin.

In the 1980s, he joined a band in San Francisco called the Good Ol’ Persons, where he met his wife, Gwendolyn.

“I was a fan of theirs,” he said. “I used to go see them and really liked the group. And so, it was a big deal for me at the time.”

He stayed with them for 12 years, playing regularly in the San Francisco area and on other national tours.

While being a member of the Good Ol’ Persons, John received an opportunity to play mandolin with Tony Rice. His music, was influenced by bluegrass with jazz and world music elements. It was both classic and highly arranged. Tony left his old band to start his own, where he hired John.

“That was a huge, huge thing because for me as an instrumentalist, it really made it. So, I felt I had to really practice up my game,” said John.

When the band dissolved in the early 1990s, John moved to Vancouver and wrote original tunes, in part because players and hobbyists of bluegrass music enjoy learning from original artists.

His song “Salt Spring” has become a jamming standard around the world.

“It’s kind of a nice legacy to have to know that these students are going to exist once you’re gone,” said John.

John and Gwendolyn will be attending the Juno Awards ceremony this weekend in Toronto.